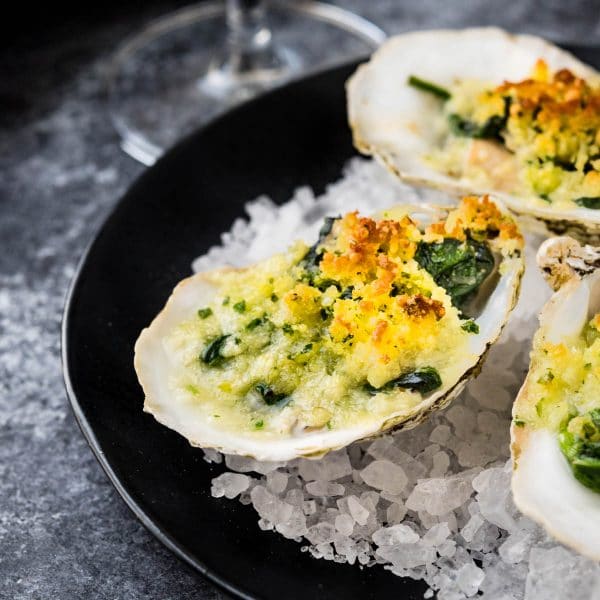 Oysters rockefeller is a classic warm appetizer made with oysters on the half shell with a buttery spinach filling and crispy crumb topping. Though simple, it’s a rich dish that’s usually reserved for special occasions, though I think whenever you make this oysters rockefeller recipe… that, in itself, IS THE OCCASION. Don’t be intimidated. The steps are straightforward and the results are spectacular.

What is oysters rockefeller?

The original oysters rockefeller recipe originated in one of my favorite food cities, New Orleans. It first made an appearance in 1889 at the now renowned Antoine’s restaurant.

Created by Jules Alciatore, (Antoine’s son) this appetizer was initially meant to use snails (escargots) instead of oysters. However, snails weren’t readily available in Louisiana, oysters were! A legend was born.

No one knows what the actual recipe for oysters rockefeller is. Jules divulged his secret recipe only to his family, so if you want to try the OG, you’ll have to go to Antoine’s (which I recommend anytime you’re in the Big Easy).

Obviously this famous dish was named for John D. Rockefeller, however, there are several thoughts on how that moniker derived.

One is that the green in the sauce, represented all the greenbacks that the Rockefellers had. Another is a proclamation from one diner who exclaimed, “these oysters are as rich as Rockefeller.”

You decide. To me, both tales are equally believable.

What we do know, is that oysters rockefeller is a rich appetizer of oysters on the half shell, topped with a buttery combination of herbs and crispy topping, which actually gives a lot of leeway in your own preparations. Here’s how I do it.

You can use whatever type of oysters are readily available for this rockefeller recipe, but I would recommend something that’s not too small or too big. Too small and they’ll be overwhelmed by the filling and crumbs. Too big and they approach dinner fare instead of an appetizer.

Mine came from the Chesapeake Bay (specifically Rappahannock Oyster Company, if you want to order some for yourself – not an affiliate link, just a fan).

For my green filling, I use spinach and this is actually a pretty common ingredient, though some recipes call for a mixture of fresh herbs like parsley and chervil. The key is having a fresh green filling (to represent all that Rockefeller cash).

I use a combination of garlic and shallots cooked in a copious amount of butter until they’re fragrant, tender and translucent. A glug of Pernod or Pastis is a common addition to deglaze the pan, but you can also use vermouth or even sherry.

Pernod and Pastis are anise flavored liquors while vermouth and sherry are sweeter fortified wines.

If you like a little spice, I recommend a pinch of red pepper flakes or a few solid dashes of your favorite hot sauce when serving.

Some recipes use panko breadcrumbs, but I prefer a sturdy, fresh sourdough crumb. You can make homemade breadcrumbs in about 20 seconds in a mini food processor.

After the crumbs are blended, I add butter (to help then brown and crisp in the oven) along with parmesan cheese and fresh parsley (more of that Rockefeller green for the oysters).

How to make the spinach filling

I can attest to the richness of this green spinach mixture. Every strand of spinach is coated in the garlicky buttery blend.

The key is to not over-cook the spinach. It should just wilt, then remove it from the heat.

If you continue to cook the greens, the color will fade to a dull grayish green. It’s not the end of the world as you’ll top it with the buttery parmesan breadcrumbs, but the greener the hue, the more ROCKEFELLER-Y your oysters will be.

The crispy, crunchy breadcrumb topping is a critical component to the oysters Rockefeller appetizer.

Many recipes call for panko, but this combination of fresh breadcrumbs with a bit of butter (to crisp and brown) as well as grated parmesan and fresh parsley, makes a much more flavorful topping.

Ok, so let’s get to the nitty gritty. Shucking oysters. I normally have my S.O. handle this task for me, while I prepare the other components, but he wasn’t home as I was cooking and the responsibility fell to me. Which means that if I can do this, so can you.

I found this video which coached me through the process.

How to assemble oysters rockefeller:

Standard and not so standard variations on oysters Rockefeller

How many Rockefeller oysters per person?

Depending on appetites, figure 2-3 baked, stuffed bivalves per person for an appetizer sized portion.

What do you serve with the oysters rockefeller recipe?

I like to cut the richness of the Rockefeller oysters with something bubbly. Champagne or sparkling wine is the perfect foil.

Bubbly and baked oysters Rockefeller sets the stage for the rest of the meal. So, why not make the next course a simple, but decadent pan seared ribeye or grilled veal chops. For a make ahead option, try Julia’s classic boeuf bourguignon or this amazing stuffed leg of lamb.

Side dishes like garlic herb flageolets and tomatoes provençal or steamed asparagus with creamy dijon dressing are easy ideas to round out the protein main course. 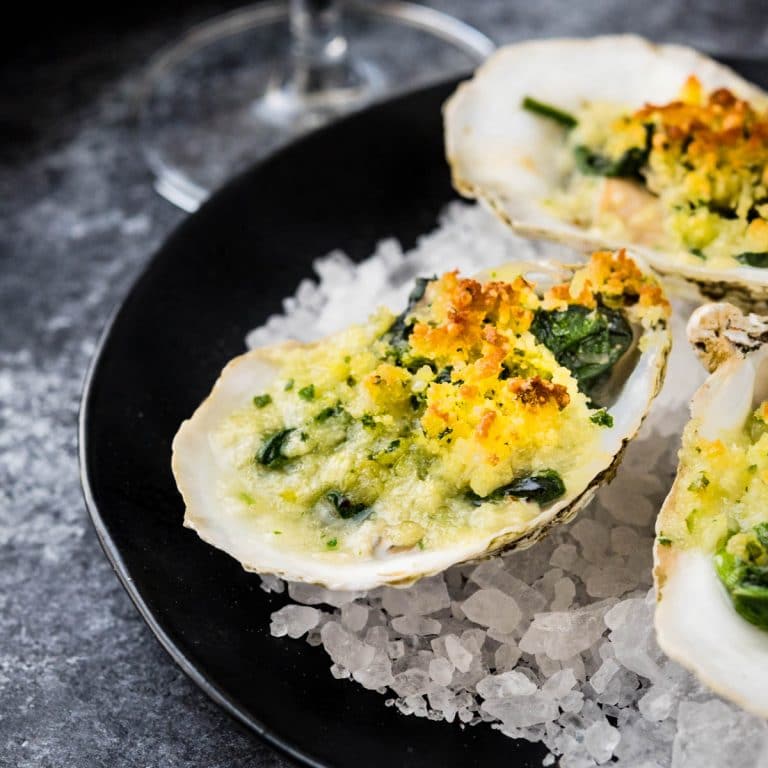 FOR THE SPINACH TOPPING:

FOR THE BUTTERED PARMESAN BREADCRUMBS:

FOR THE SPINACH TOPPING