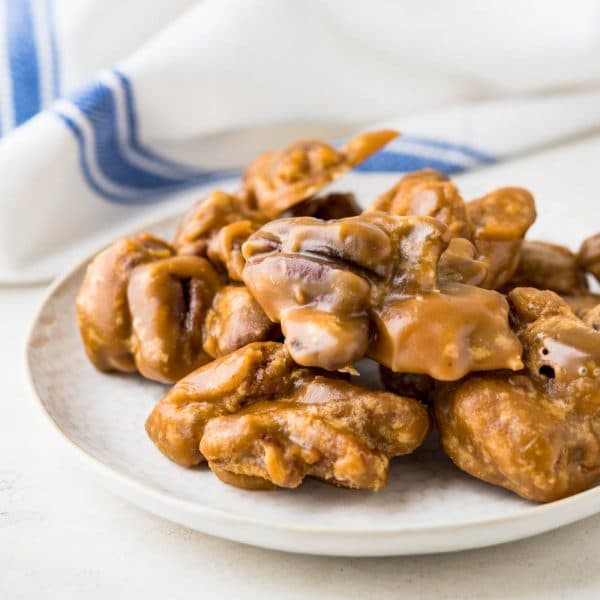 Classic Southern style pecan pralines are a sweet, nutty confection that literally melt in your mouth. They are crumbly, not chewy, and dotted with crunchy toasted pecans in a burnished, buttery blend. They harden quickly and are gobbled up just as fast. While you’ll love eating them straight up, this buttery sweet pecan candy can also be used as an ingredient in other recipes to take them to the next level.

Homemade pecan pralines aren’t difficult to make, however, they do require working with molten sugar and cooking the praline mixture to a specific temperature (240°). Once you achieve the soft-ball stage, you have to work quickly, but carefully.

Unfussy. That’s how I’d describe homemade Southern pecan pralines. They aren’t uniform or standard, but rather just clusters of crunchy toasted pecans enrobed in a blend of melted sugar, cream and butter. This crumbly, crunchy, melt-in-your-mouth confection is famous from across the South from Virginia through Texas and you can make them famous in your house too.

I first tried pralines as a kid, mistakenly thinking they were like a “blondie-fudge”. Nope. No way.

Instead, real pecan pralines are firm, but not brittle or hard, crunchy, but more from the toasted nuts than the praline mixture itself. They’ve got a crumbly, granular, sugary texture that melts as soon as it meets your tongue.

Traditionally made with sugar, cream and nuts, this version has a a bit of molasses to give them a hearty, deep flavor that pairs perfectly with the maple flavor of toasted pecans.

In other words, these candies taste like the South.

History of pecan pralines. Where did they come from?

Though this pecan candy is well known throughout the South, it actually has its stateside origins in New Orleans… and France before that.

Created in the early 1700’s by chef Clement Lassagne, the personal chef of César, duc de Choiseul, Comte du Plessis-Praslin (for whom pralines were named), the original candy was made with almonds enrobed in a sugary, caramelized coating.

From here, this nutty confection became renowned and spread across Europe, where it’s taken on very different styles depending on the country that’s making them.

In much of Europe, for example, they use ground nuts to make sheets of pralines which are smashed or ground to use in fillings for other decadent desserts.

In Belgium, pralines are typically formed chocolates with soft or liquid flavored fillings.

The evolution of this pecan candy in the U.S. was due to Ursuline nuns who emigrated to Louisiana in 1727 and used a similar candy-making method with local ingredients that were more readily available to them. Almonds were replaced with the ubiquitous pecan and Southern pralines came to be a heralded sweet treat.

Nowadays, you’ll find as many different praline recipes as the locales who claim them.

How do you pronounce praline?

it really depends on where you’re from.

Southern communities, settled by the French, go with a softer, more genteel sounding “prah-leen” with a nod to the French pronunciation of the the original Comte du Plessis-Praslin. According to my mother (who is French and happened to be a high school French teacher) the Count’s name is pronounced: Pley sees praz liñ. (Thanks, Mom).

Another common pronunciation for this pecan candy (frequently used in Texas, Georgia and New England) is the anglicized “pray-leen”.

No matter how you say it, the soft, Southern flavor of these sweet pecan candies is undeniable.

There’s no “one way” to make pralines and variations abound. Traditionally, pralines are a combination of sugar, cream, butter and nuts, but different recipes will have you using all white sugar or all brown, everything from whipping cream to evaporated milk and corn syrup (which makes it chewy and less like the traditional, classic pralines) to molasses which adds a deeper, more intense flavor.

Beyond the classic, though, you’ll find pralines in a multitude of flavors from chocolate to coconut to peanut butter and beyond.

This pecan praline recipes uses a combination of sugars and molasses (for a deeper, richer flavor), whipping cream and natural flavorings.

What are the white spots on my pralines?

Something you’ll notice on all pecan pralines are small little white spots or “blooms” on the candy.

You might think you’ve done something wrong (I did), but the good news is, you haven’t.

Those blooms are actually the melted sugars trying to crystallize again as the candies cool. Corn syrup can help prevent the crystallization, but it also makes the pralines soft and chewy instead of the classic firm-crumbly texture.

Those white spots are a common occurrence even in professional candy shops. So don’t beat yourself up about it.

Most classic Southern pralines are roundish puddles of candy with whole pecans scattered through them. They aren’t uniform or molded candies, but rather free-form jumbles.

Dropped by teaspoonfuls onto parchment paper these buttery sweet confections are perfectly imperfect in their formation.

As you get to the end of spooning out your pralines onto the parchment, the candy will already start to harden, making those last few clusters “not so pretty” at least that’s been my experience.

Just like the ugly or misshapen vegetables in your CSA box, they taste just as good as the pristine ones. Crumble any unsightly candies over a dish of ice cream. The flavor is amazing and no-one has to know they got the “ugly one”.

How long will pralines last?

Not long — I mean, who can resist homemade pecan candies? Seriously, though, they should keep in an airtight container for up to two weeks.

Can I freeze pecan pralines?

I’ve never made so many that I had to freeze them, but yes, you can. Let them defrost completely before serving.

Can I use pecan pieces instead of whole pecans?

Yes. The flavor is the same, though the presentation isn’t quite as dramatic.

Can I use another type of nut in this praline recipe?

Yes. Though technically, they wouldn’t be considered the traditional Southern praline. You can use any type of nut in this recipe. I do recommend toasting them first to bring out the best flavor.

Can I add different flavorings to the pecan candy?

Yes. You can swap out the vanilla extract with other types extracts. I would recommend maple extract (not syrup), coconut, almond or coffee.

How do I decorate pralines?

This candy is supposed to be rustic, so decorating is definitely not required, but if you wanted to add a little flair, adding a sprinkle of fleur de sel before the pralines have set would add a crunchy yin-yan to the candy. Additionally, drizzling melted dark or milk chocolate over the pralines would cover the sugar blooms and add a rich, decadent coating. Just be sure the chocolate isn’t too hot before drizzling over the candies, so that it doesn’t melt the praline base.

What I like about this recipe is that it’s not an all-day endeavor. In fact, you can make a batch of homemade pecan pralines in a little over half an hour. If you’d like to try candy-making but don’t have all the molds and special equipment necessary for it, this is a good place to start.

I actually made several batches of these pralines, some using more nuts and some with a little less.

As a confirmed nut-lover, I prefer more pecans than less, but with so many nuts, you don’t get that classic round puddle of praline, but more of a rubbly cluster of pecans that’s barely held together by the sugary praline mix.

If that sounds good to you, increase the pecans in this recipe to 1 1/2 cups.

What to do with pralines?

I love to eat these nutty pecan candies as a snack, but they’re also great in other recipes. Here’s a few of my favorite ways to use pralines: 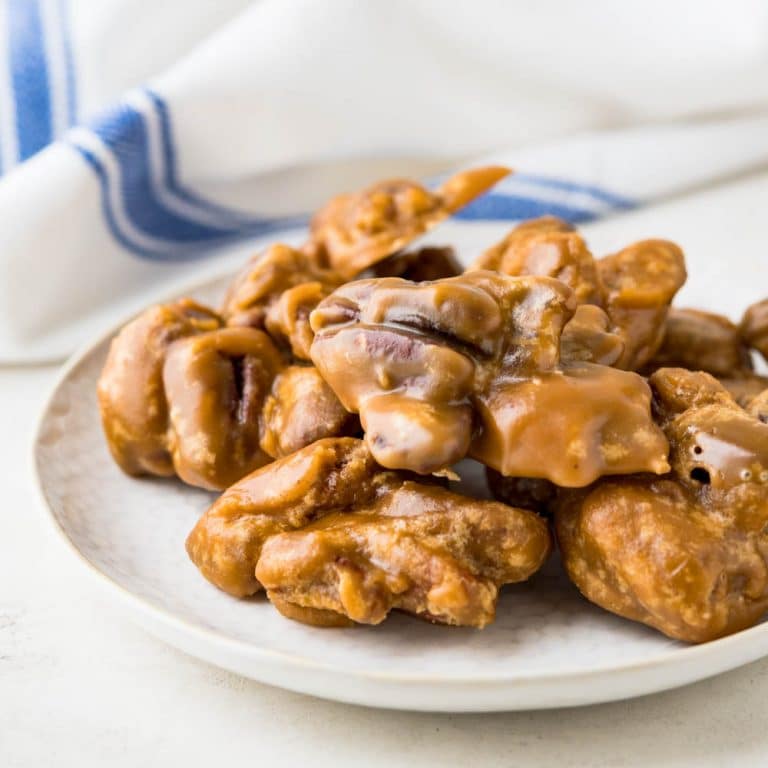 These simple, sweet, buttery confections are a staple across the South. Pecan pralines are made with sugar, cream and toasted nuts for a one of a kind pecan candy that melts in your mouth.
Course Dessert
Cuisine American, Southern
Keyword candied pecans, candy, pecans
Prep Time 5 minutes
Cook Time 8 minutes
Total Time 33 minutes
Servings 15