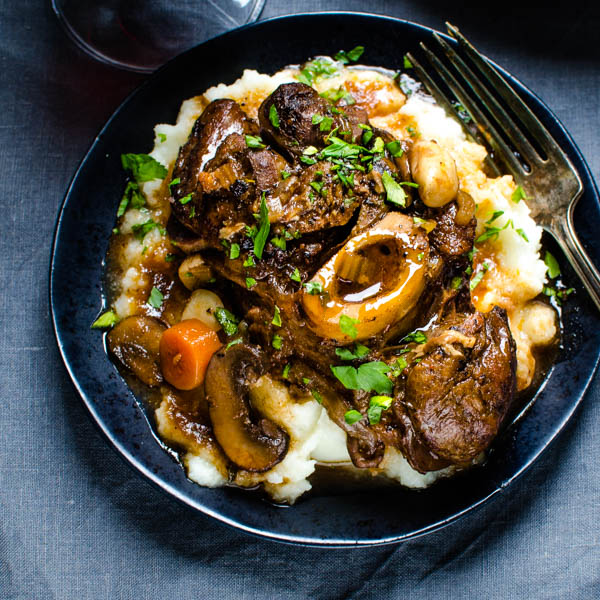 My veal shank recipe is a cross between a stew and a braise.

It’s like a veal shank stew because it’s loaded with mushrooms, onions and carrots to eat like a full meal.

However, the cross cut veal shanks are kept whole instead of being cut into cubes. Rather than swimming in sauce, they’re gently braised.

This veal stew recipe uses two whole heads of garlic, which seems like a lot, I know. Don’t worry, the garlic is sweet and nutty, not biting and harsh, because we blanch it first.

How to blanch garlic for braised veal shanks

Note: Several sources I’ve found will have you blanching garlic 3 times before using. It’s not necessary for this veal shank recipe because the garlic will also be braised for 2 hours, further softening the alliums.

How to make braised veal shanks

Braising refers to a combination of dry and moist cooking that’s frequently used with tougher cuts of meat. First the meat is seared in a hot pan and then simmered in a covered heavy pot or dutch oven with just enough liquid to nestle the meat in without covering it completely. Braising breaks down the tougher connective tissues that would normally be inedible and marries the flavors.

Bouquet Garni is simply an herb bundle that’s tied with kitchen string and added to soups, stews and braises to impart the herbs flavor. Remove the bouquet garni before serving.

The beauty of oven braising

I love oven braising meats and stews like this veal shank recipe because once the ingredients are assembled, its HANDS OFF. Once the pot goes into the oven, you don’t have to tend, stir or even lift the lid to check on it. Just let it cook.

The whole house will be permeated with rich, savory aromas that will make your stomach rumble in hungry anticipation.

Can I make braised veal shank stew ahead of time?

Yes. In fact, it’s even better the next day.

How can I remove the grease that renders from the veal shanks?

There are two ways.
1. The first is to dip a tablespoon flat into a puddle of oil and let it fill the spoon. Discard the grease and repeat until most of it is gone.
2. Let the braise come to room temperature then refrigerate until the fats solidify. Then remove the excess fat and discard.

Can I freeze braised veal shanks?

Yes. Store the veal shanks in an airtight container for up to 3 months.

What to serve with braised veal shanks