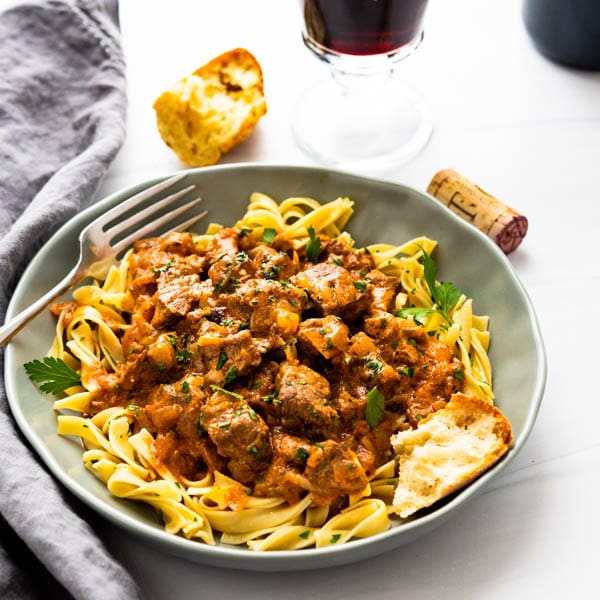 German goulash is a hearty beef stew, seasoned with onion, paprika and caraway seed. It’s a simple but rich and comforting one pot meal that’s great over egg noodles, mashed potatoes or spaetzle. Learn how to make this easy German goulash recipe in one pot with a Dutch oven, slow cooker or Instant Pot. It only takes 30 minutes of hands-on prep for a delicious, home cooked meal.

The term “goulash” has evolved over time to mean a “soup or stew”, but it’s origins date back to the 9th century gulyás (shepherds) who raised cattle on the plains of Hungary and sold their herds on cattle drives.

On those long treks to market their steers, goulash sustained the shepherds. Goulash, traditionally a soup, was made with the weaker cattle that couldn’t survive the arduous trip. Every part of the animal was used.

Onions and caraway, prolific on the plains of Hungary, were natural mainstays to season the goulash. (Paprika wasn’t introduced until centuries later.)

As the gulyás traveled between towns and cities, selling cattle and sharing their goulash, it became a popular dish in each region they visited. Variations to the traditional goulash recipe sprang up from the different locales, each putting their own twist on classic Hungarian goulash.

As with regional American barbecue, goulash recipe variations abound, depending on who’s making it. Here’s a small, but not exhaustive list.

This recipe uses 1 1/2 POUNDS of onions. That might seem like overkill, but it’s not. The onions cook down until they’re soft and sweet. They add depth, but not sting to this simple German stew.

Note: I’ve added sour cream to this German goulash recipe, which technically makes it lean toward a paprikash. You don’t have to add it if you don’t want to, but I’ve found that the rich, tangy notes of just a little sour cream pair very well with the beef goulash.

How to make German goulash in the oven

Can I make German goulash in a slow cooker?

Yes. Follow the instructions to the point of browning the meat, then transfer the ingredients to the slow cooker. Cover with the lid and cook on low for 6-8 hours or on high for 3-4.

If the stew isn’t as thick as you’d like, let it simmer without the lid for 45 minutes to an hour towards the end of cooking to evaporate some of the liquid.

Can I make it on the stovetop?

Yes. After the goulash comes to a boil, reduce the heat to medium to medium low and place the lid on the pot so its slightly askew and steam can escape. Simmer for 1 1/2 to 2 hours, stirring occasionally to prevent sticking and/or burning.

Can I use a pressure cooker or Instant Pot?

Yes. Follow the instructions to the point of combining the browned meat with the rest of the ingredients (except the sour cream), then bring the pot to high pressure and cook for 35 minutes. Let the pressure release naturally.

If the stew isn’t as thick as you’d like, continue to simmer using the sauté function, stirring occasionally (so it doesn’t scorch) until some of the liquid evaporates and the goulash thickens, about 20 minutes.

There are several types of paprika and you might think that they’re interchangeable. They’re not.

Also known as hot paprika, is made with dried, ground peppers and provides a spicy kick to many dishes. I use this paprika for the German goulash.

Sweet paprika is made from sweet dried peppers and adds color, but little heat to finished dishes. This is the type of paprika you want for adding a hint of color without changing the flavor profile of a dish. (Think the garnish on deviled eggs or a scoop of cottage cheese).

Smoked paprika (aka pimento or Spanish paprika) is made from peppers that are smoked over wood fires. They add a definitive rich smokiness to many dishes. True pimenton is made according to very strict, regulated standards.

Check the dates on your spices

Spices (especially ground spices) lose their flavor over time. Most spices will be good to use for 6 months to a year, and whole spices can last for up to 2 years. You want to make sure that your paprika and caraway are flavorful and the best way to do that is with your NOSE. Smell the spices. If the aroma is muted, they’re probably old and you’ll want to replenish your stock before making this German goulash.

Use a good quality beef stock

I like to use my homemade beef stock (it uses beef neck bones), but you can also use a good store bought brand. Just be sure to get the low-sodium version. As it cooks, the liquids in the German goulash evaporate somewhat to thicken it — and if you use a full-sodium stock it can over-salt the dish.

Can I make German goulash ahead of time?

Yes. Follow the directions through the braising, but don’t add the sour cream. Let the goulash cool to room temperature and refrigerate it in a sealed container for up to 3-4 days. Reheat it in a heavy pot or dutch oven and stir in the sour cream just before serving.

Can I freeze goulash?

Yes. Freeze it in plastic storage containers for up to 3 months. Defrost completely before reheating over medium heat.

How long will it keep in the refrigerator?

German goulash is best if eaten within 3-4 days.

What to serve with German goulash?

What readers are saying about this German Goulash recipe

This homemade German goulash is very popular with my followers, here’s what a few of them had to say:

Eiko says: “Best German Goulash recipe ever! Followed the recipe exactly. Great Flavor! Will be making this over and over!”

Kim says: “Family enjoyed this dish!! Easy to make. Tastes better when making a day ahead of time.”

From Schwan: “I made this tonight per the recipe. It was excellent! Something different that I will definitely make again. Thanks!”