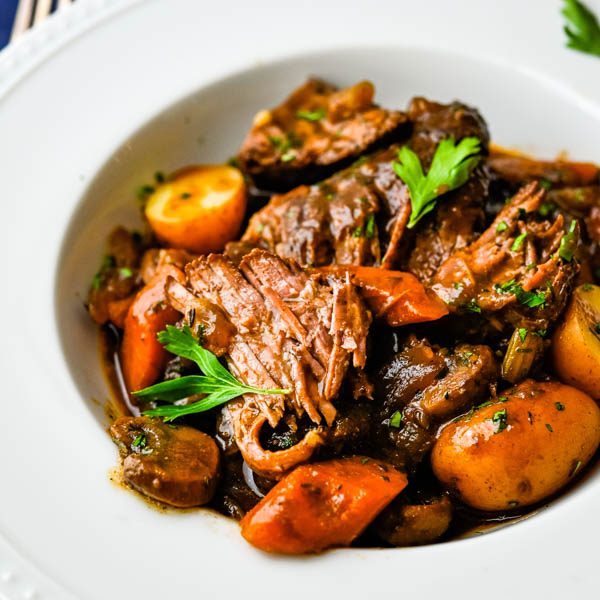 This Dutch Oven Pot Roast is the ultimate one pot meal and your whole family is going to LOVE it. With a simple 4-ingredient pot roast seasoning and an Ah-Mazing Porcini Sauce made with dried porcini mushrooms for deep umami flavors and depth, this Yankee Pot Roast is heads and tails over the rest. So, if you want to know how to cook pot roast in the oven, stick around. FYI – You can also use your slow cooker or Instant Pot (directions included).

Before we get into the recipe for this Dutch oven pot roast, let’s talk about the best cut for pot roast.

There is no “Best” for pot roast, except to say that the tougher, chewier cuts that you’d NEVER think to throw on a grill for a 10-minute meal, generally work VERY well for pot roast. That’s because slow braising tougher cuts of meat will break down the natural collagen of the roast, tenderizing it and adding body to what will become a silky sauce later.

3 Of The Best Cuts For Pot Roast

Chuck Roast – You’ll find this with and without bones. I usually prefer with bones, because they add another layer of flavor to this one pot meal, but realistically a boneless chuck roast is fine too.

Round – You’ve probably seen bottom round roasts or rump roasts in the supermarket. These portions come from the rear of the animal and work well in a long braise like this.

Brisket – The brisket comes from the underside of the animal (breast region) and the flat cut makes it ideal for this Yankee pot roast. Note: Because the brisket has such long strands, when you’re serving you may want to cut it against the grain.

Once you’ve chosen your cut, you need to season the meat. I like to go with something really straightforward. My 4-ingredient pot roast seasoning uses:

This is a step you don’t want to skip. It’s where the flavor really starts to develop in this recipe and its one reason I prefer a Dutch oven over slow-cookers and pressure cookers for this Yankee pot roast recipe. It’s a real one pot meal with a Dutch oven.

Searing The Meat and Sautéing Mushrooms

Pro Tip: If the meat doesn’t easily release from the pan, it’s not done searing. Don’t worry, it may just need a few more minutes and will release when it’s good and ready.

Other Methods Of Cooking

For Slow Cooker: You’ll need to sear the meat in another heavy pot or pan — because you can’t achieve the crust in the slow cooker. Follow the same method outlined above.

For Instant Pot: Depending on the size of your pressure cooker, the roast may not fit in the pot in one piece, consequently, you may need to cut it into chunks that will fit in the pan to sear. Brown the chunks of meat in batches using the sauté function on the Instant Pot, or for regular pressure cookers just sear over the stove top as instructed above.

In a word? Vegetables. Regular pot roast is just meat and sauce… Yankee Pot roast adds vegetables making it a true one pot meal. But don’t go crazy with the veg. You want to keep it simple for that authentic homestyle feel.

My secret ingredient for a richer, deeper and more flavorful braising liquid and sauce is dried porcini mushroom powder and it’s incredible… I actually came up with this when I had a package of dehydrated mushrooms in my pantry — that had been there for a long time and were well past their use by date. I didn’t want to risk rehydrating them, but I also didn’t want to throw out $5 worth of fancy-pants mushrooms. I ground it into a powder and used it to flavor sauces, soups and stews. This one ingredient can be transformative to so many dishes including this Dutch oven pot roast.

The braising liquid doubles as the sauce for the Yankee pot roast, so you want it to be GOOD. Rich, silky and loaded with flavor. Am-I-right? Most pot roasts just use beef broth and a little red wine and leave it at that. Frankly, that method is very one-note to me. This red wine porcini sauce is everything you want that gravy to be and then some.

Whisk the ingredients together until well combined.

How To Cook Pot Roast In the Oven

How To Cook Pot Roast In The Slow Cooker

How To Cook Pot Roast In The Instant Pot

How To Cook Yankee Pot Roast In Stovetop Pressure Cooker

This pot roast smells SO FREAKIN’ GOOD, you’re gonna want to dive right in… but don’t. You see, that braise has not only broken down the cartilage, it’s also dissolved the fat into the wine-porcini sauce. Now a little fat isn’t a bad thing, but I’m willing to bet there’s more than just a little that came out of your roast.

How To Remove Excess Fat From Dutch Oven Pot Roast

Method 1: Use a spoon – {the fat will be on top and porcini sauce will sink to the bottom} – and bit by bit, skim away the fat from the sauce and discard.  This will take some time and patience.

Method 2: Let the roast come to room temperature, cover and refrigerate for several hours or overnight. The fat will solidify. Then use a spoon or fork to lift the fat solids from the pot roast and discard. (This is my preferred method as it eliminates about 95% of the fat and it’s SO MUCH EASIER.)

You can reheat the pot roast in the oven or on the stovetop.

On The Stovetop: Place the pot over medium heat with the lid securely fastened. Heat, stirring occasionally until the Yankee pot roast, vegetables and rich wine porcini sauce are hot.

The pot roast seasoning started the layers of flavors in this one pot meal, but searing and caramelizing the meat really make it sing. That rich sauce is amazing to dunk a dinner roll into and the pot roast is so tender that it comes apart with a fork or spoon. I’ve seen some recipes that call for shredding the meat. I don’t do that. Instead, I use a serving spoon to carve off chunks and then ladle the veggies and porcini sauce over the roast. It’s heavenly.

You shouldn’t need to thicken the porcini sauce with flour or cornstarch as will naturally come together in a glossy, velvety blend. Seriously, you’ll want to bathe in it. Pinky-swear.

What To Serve with Dutch Oven Pot Roast 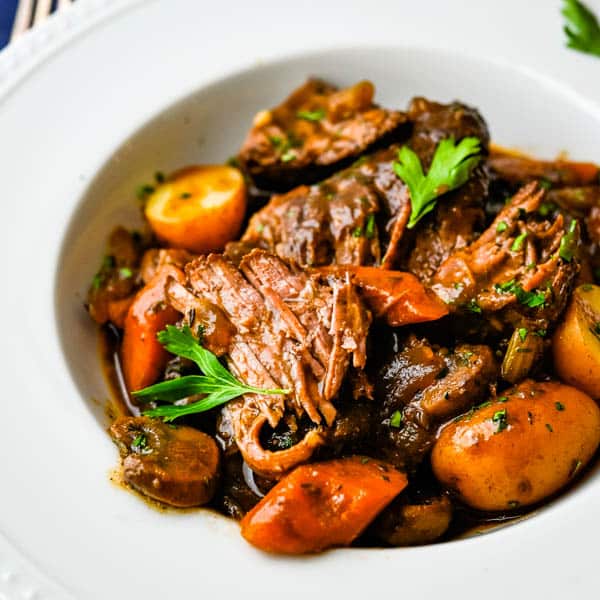 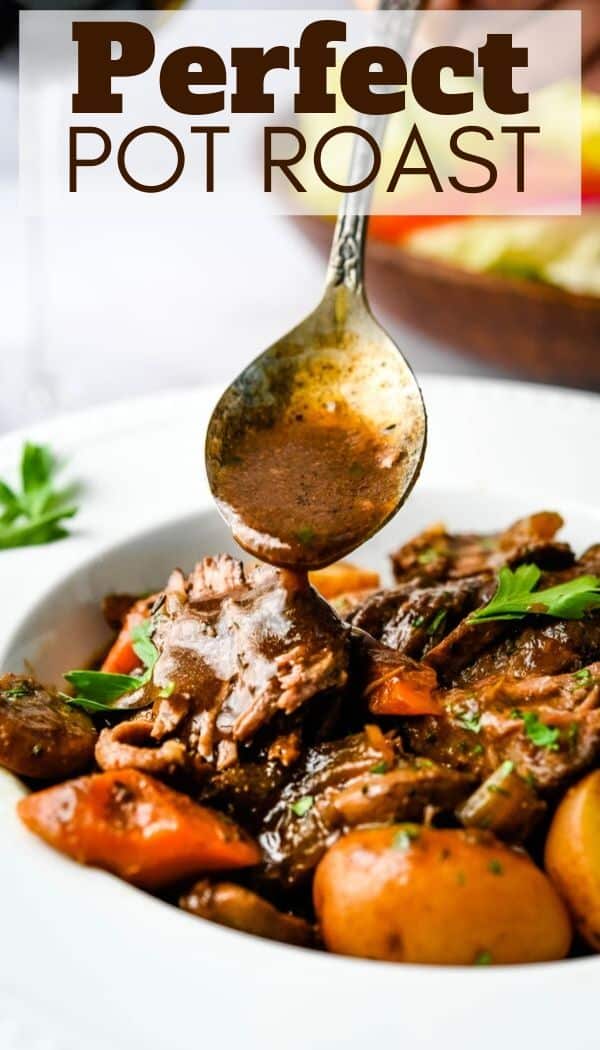