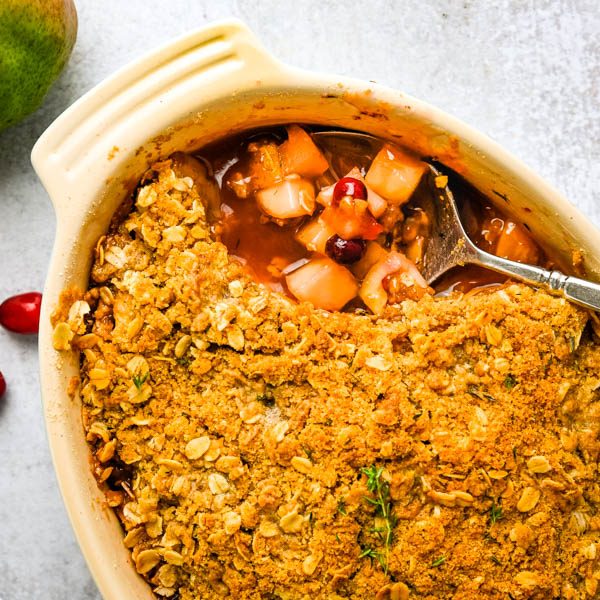 If you love warm, fruity cobblers, crisps and crumbles, this Fresh Cranberry Pear Crisp with Herbs is sweet, tangy and luscious. This pear dessert is easy to make and is ready in about an hour. When you’re craving fall flavors, these baked pears with tart, zingy cranberries topped with brown sugar, spices and old-fashioned oats makes this pear crumble a winner every time. Delish with a scoop of vanilla. 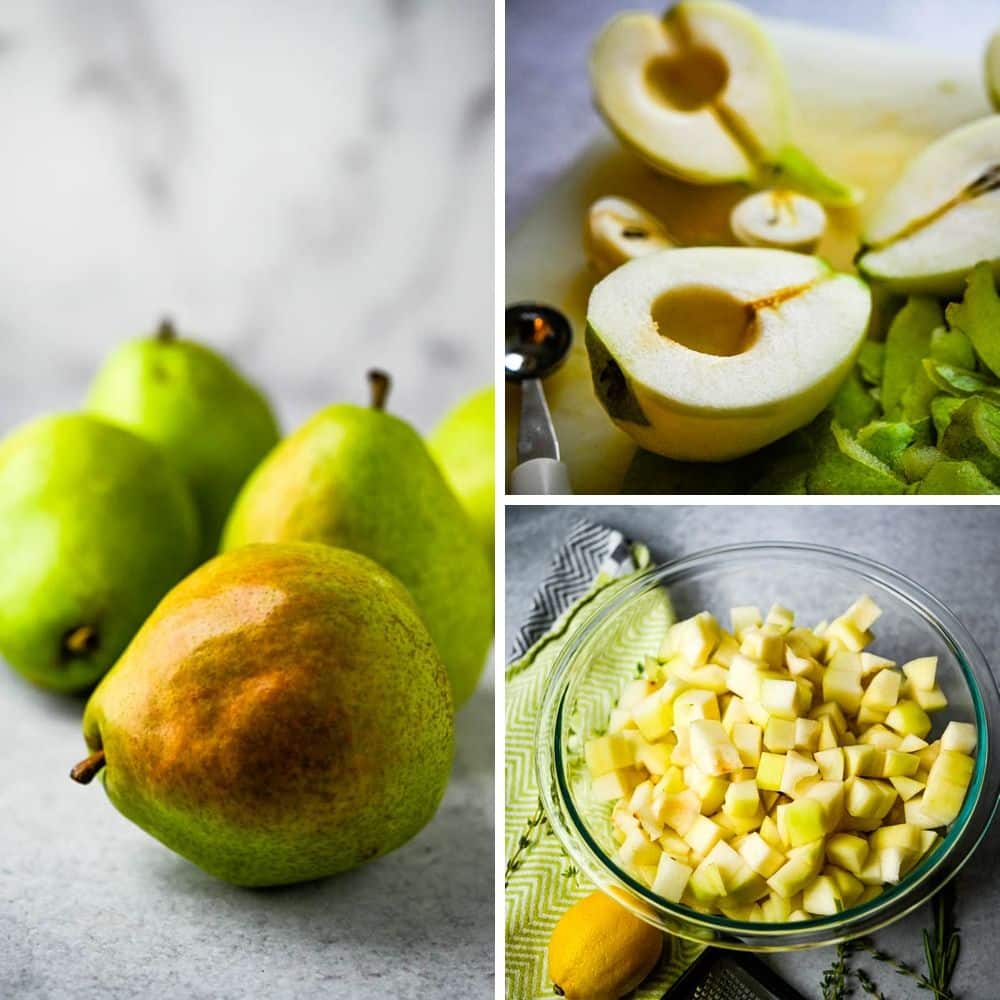 I admit to sometimes being a lazy cook… Rather than fussing over intricate layer cakes, or batch after batch of cut out cookies, I’m much more apt to toss a bunch of fruit into a casserole dish and top it with a sweet, crunchy topping. It’s easy. That’s why this pear crumble is a winner. Quick and satisfying without a full on baking commitment. 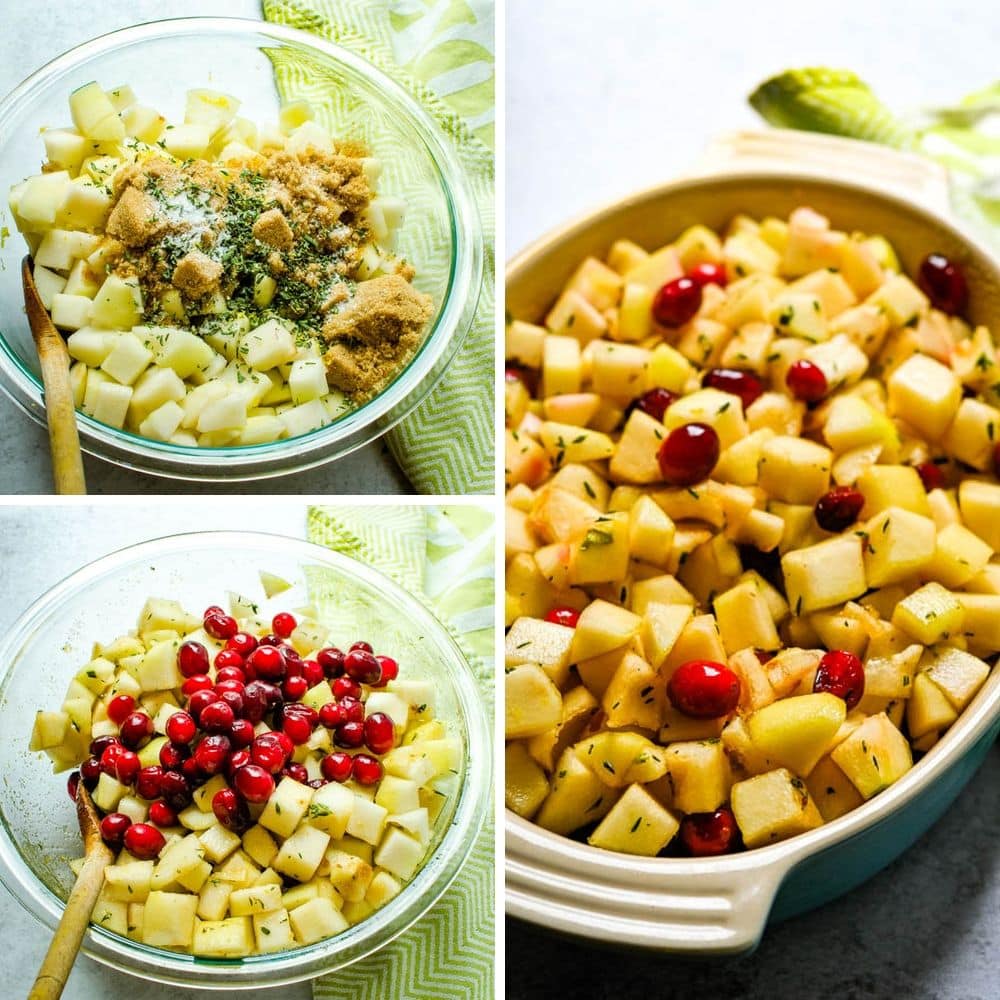 I know what you’re thinking. Why would you add herbs to baked pears? Herbs are savory and we’re making a pear dessert… Well, here’s my rationale… Rosemary has a kind of piney quality and fresh thyme is floral and lemony. Neither of these additions is overpowering, rather they just play a supporting role to the baked fruit and crumble topping. If you don’t have any herbs on hand… or if you want to skip them, you can. This pear crisp will still be amazing, but the herbs add a nuanced flavor that elevates this homestyle fall dessert.

What’s the Difference Between Pear Crisp and Pear Crumble?

The term “crumble” originated in England and it described a baked fruit dessert that had a crumbly topping of flour, butter and sugar, but no oatmeal. Crisps have oatmeal which would “crisp” as the dessert baked in the oven. Over the years the two words have become interchangeable.  This recipe does use oatmeal in the brown sugar topping, thus it’s technically a pear crisp… but a rose by any other name would smell as sweet, right?

Make sure the butter is very cold (or even frozen) before mixing it into the dry ingredients.

Cut the butter into small cubes and use a pastry cutter to cut it into the flour mixture until small pea-sized crumbs form. This is the standard way of blending butter with dry ingredients, but check out this other method {below} which makes quick work of the crumble topping.

METHOD 2: Working quickly, grate the frozen butter on the large holes of a box grater. Transfer it to the flour and brown sugar mixture and toss until evenly combined. 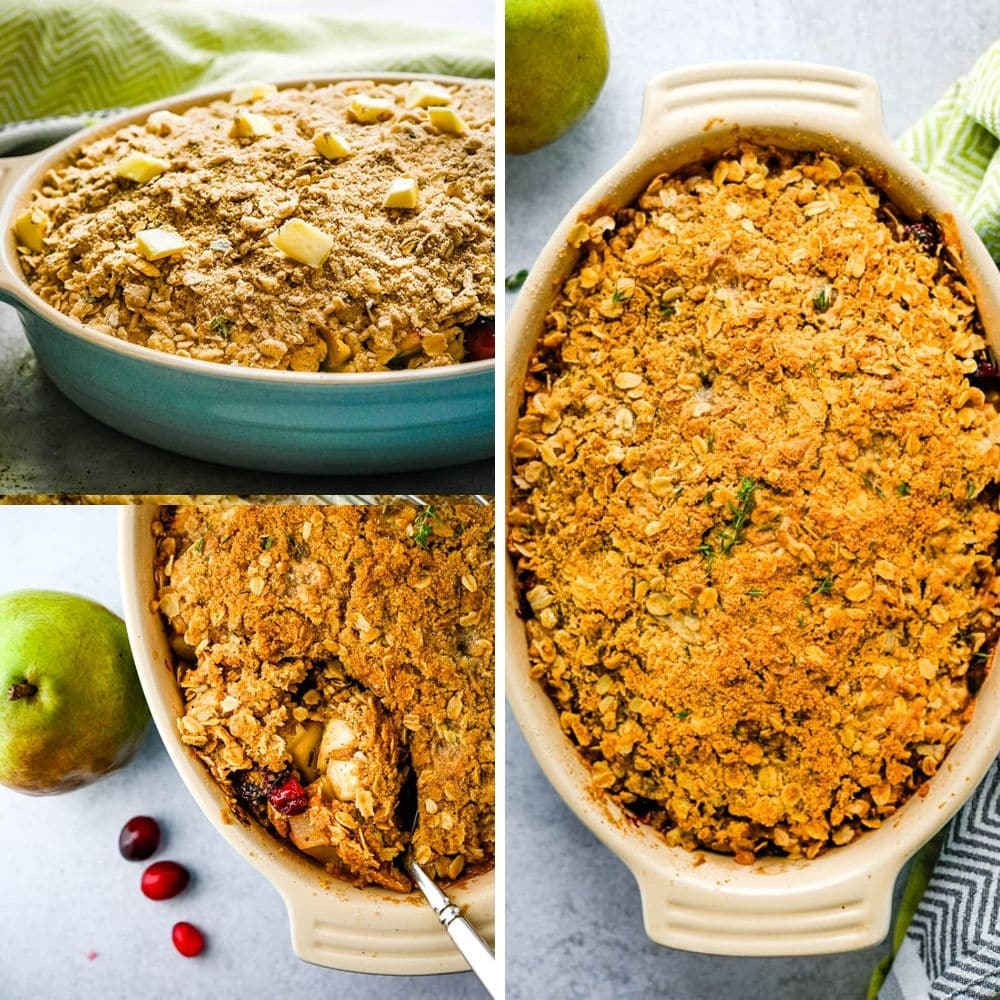 The baked pears and fresh cranberries fill the house with such heavenly aromas and the oatmeal crisp topping is scented with fall spices and herbs. It’s an irresistible, tummy rumbler.

What To Serve With Fresh Cranberry Pear Crisp 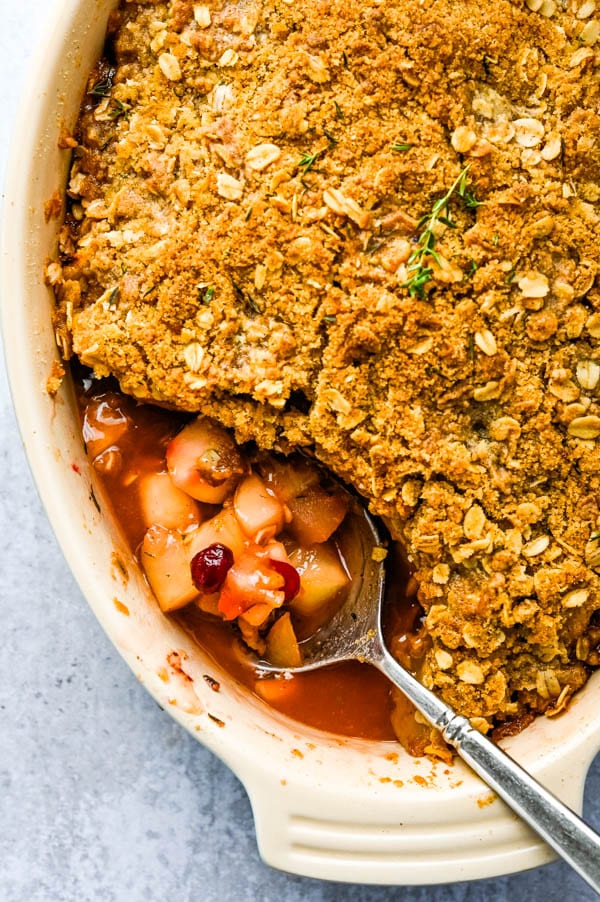 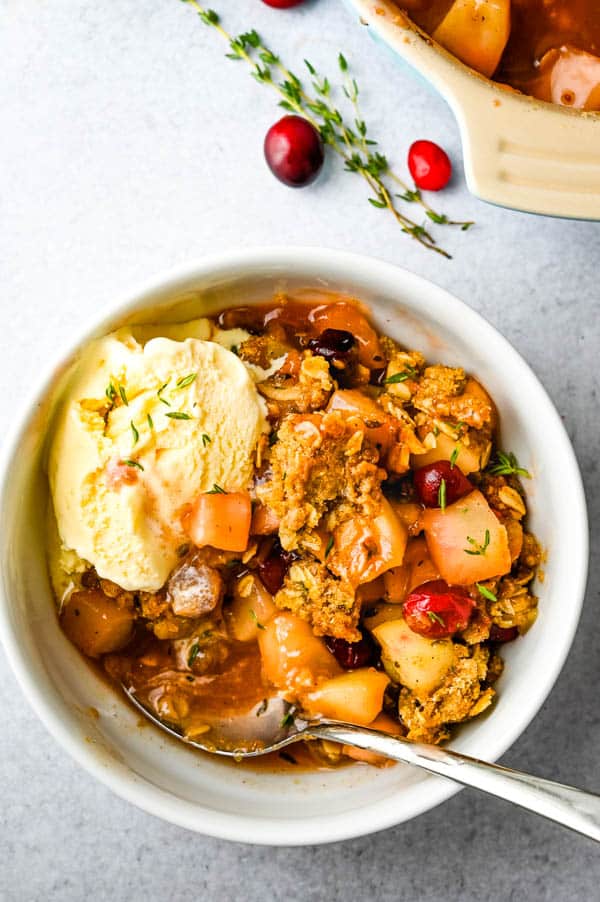 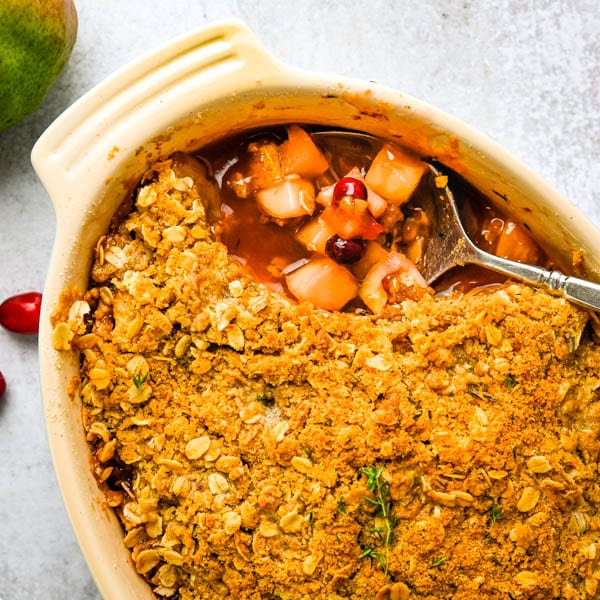 This is a "not too sweet" dessert with the fruit taking center stage and the delicate herbs adding a floral back note. You need to try this one!
Course Dessert
Cuisine American
Keyword cranberries, fall dessert, pears
Prep Time 30 minutes
Cook Time 40 minutes
Total Time 1 hour 10 minutes
Servings 10

For the Crisp Topping

FOR THE OATMEAL TOPPING:

From wikipedia: Arrowroot makes clear, shimmering fruit gels, is used in cooking to produce a clear, thickened sauce, such as a fruit sauce. It will not make the sauce go cloudy, like cornstarch, flour or other starchy thickening agents would.
However, if you don't have arrowroot - you can substitute cornstarch. 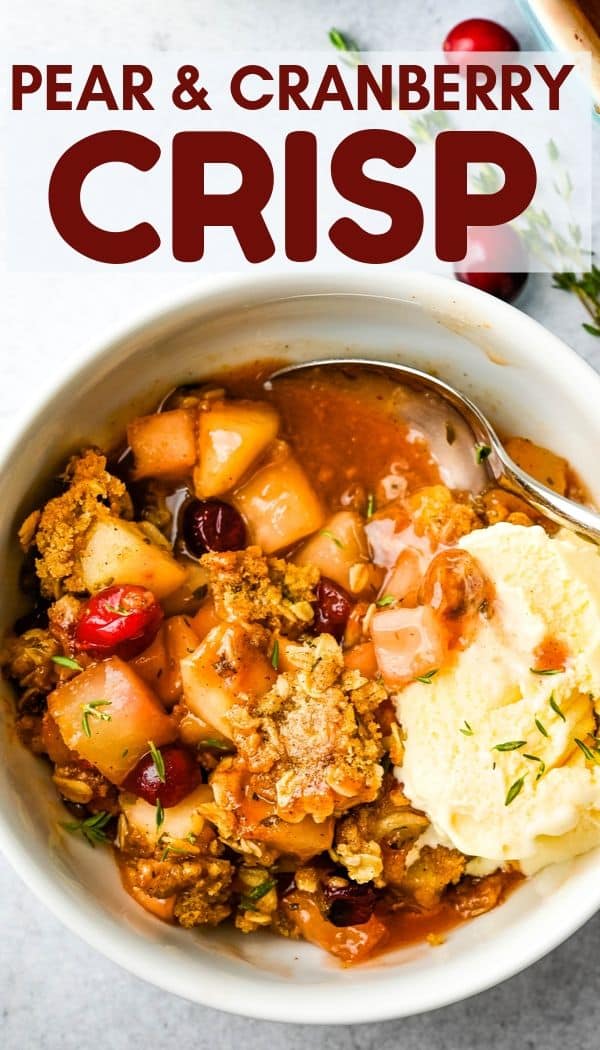