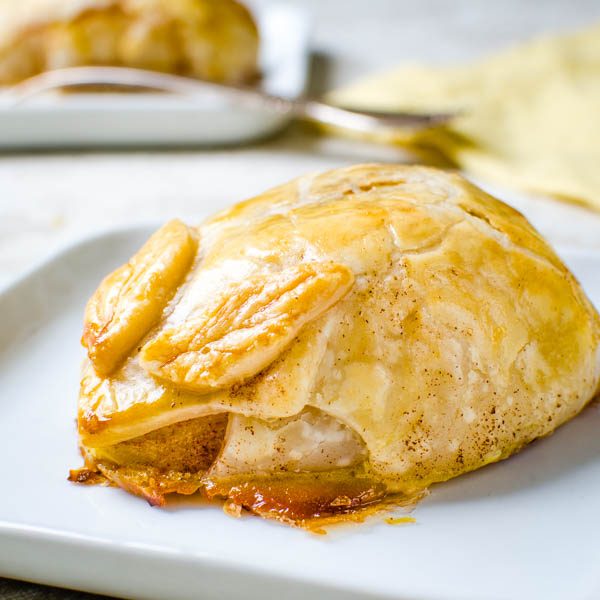 Some of the best pear dessert recipes are the simplest. Take these Autumn Spiced Baked Pears. They’re little more than fruit, sugar, spice and pie crust (I used Pillsbury). This quick pear dessert turns out beautiful little domes that taste like mini pear pies and it’s one of our family favorites because this baked pear dessert is actually my grandmother’s recipe.

This baked pear dessert is Madou’s recipe and it’s one of my favorites because it’s quick, easy and no-fuss. It had to be because my grandmother, despite her rock solid cooking skills, was no pastry chef. Her repertoire of desserts usually lay within the custard or pudding realm, so these mini pear pies were not only a rare treat, but they took her a little outside her wheel house… pastry… Well, not really pastry. She used store-bought crust. And that’s the beauty of this quick pear dessert. Simplicity.

Yep, only 6 ingredients for this quick pear dessert.  That’s the way Madou wanted it. She couldn’t be bothered with long ingredients for desserts, or painfully precise assembly. “Floop-floop,” she would say, batting her hand as if to emphasize the 1-2-DONE nature of  her mini pear pies.

I’m pretty sure I inherited her pastry skills — which is to say, they are lacking, but even my rudimentary technique gets the job done.  By the way, this isn’t supposed to look like a rabbit — those are my own rendition of leaves attached to the stem of the baked pears – LOL!

As it bakes, the pear gets soft and juicy, while the crust (thank you Pillsbury) gets flaky and golden.  Don’t skip the egg wash step as that’s what’s responsible for the soft shine on the pastry.

What To Serve With Baked Pear Dessert

The pears should be served warm and preferably with a scoop of vanilla or a dollop of whipped cream for good measure, but they’re good on their own as well. You could also drizzle them with a bit of caramel sauce.

Savory Ways To Use Pears: