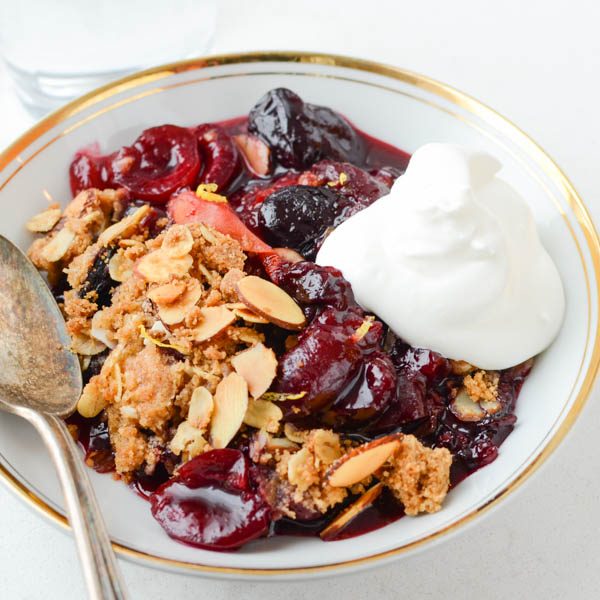 Just  one look at this crisp and you know you have to make it, right?  The fruit is oozing sweet juices, the crumbly cinnamon crisp, is practically tickling your nose with its spicy baked aroma. Come on, it’s calling  you. 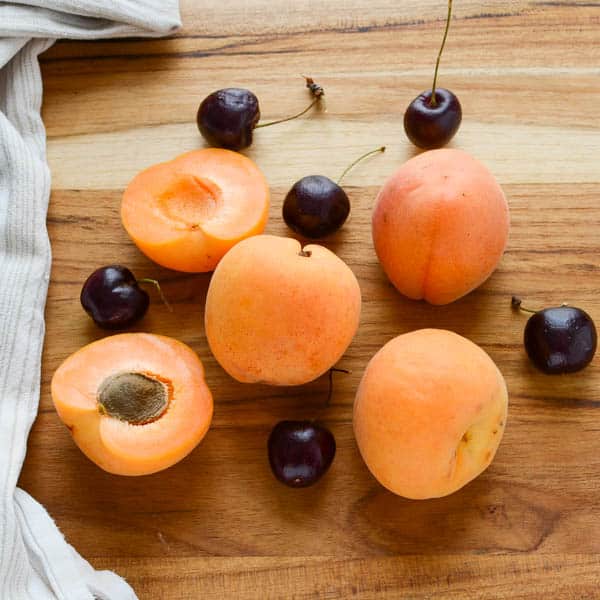 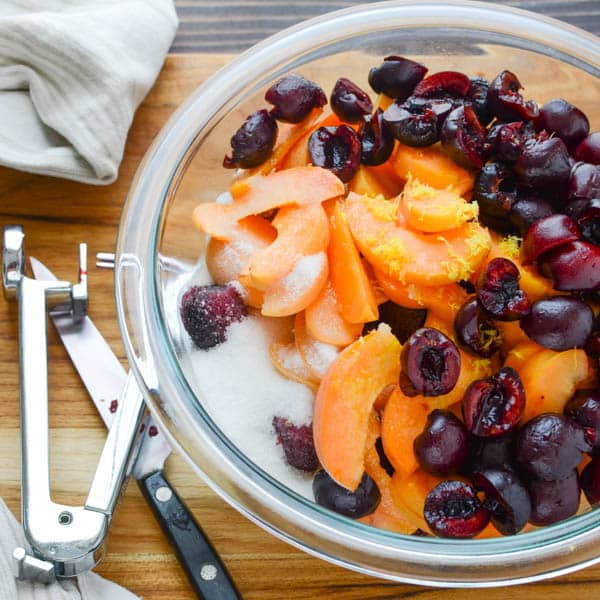 Apricots are temptingly fragrant and ripe at this time of year.   Cherries are everywhere.  And did I mention the almond crisp topping?  Let’s start your grocery list now:  Apricots, Cherries, Sliced Almonds… 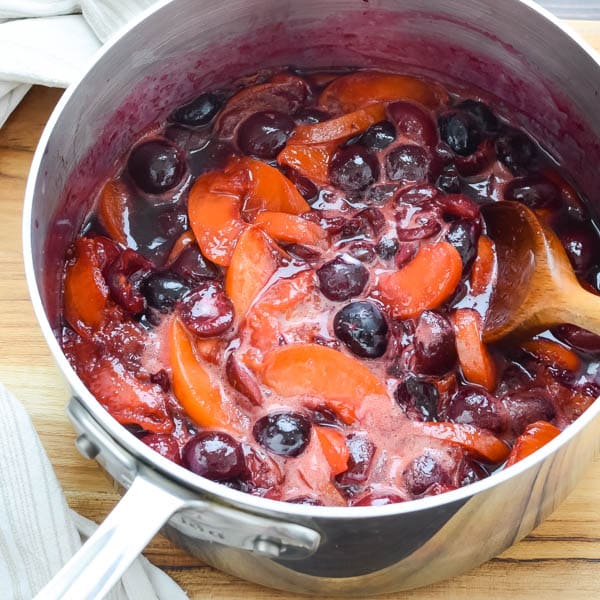 Not convinced?  Well, think about this, in a few months (and it’ll go by before you know it), we’re going to be shifting from luscious summer fruit into fall — apple,  pear  and dare I say, pumpkin season.  Good, yes, but your summer fruit opportunity will have passed. 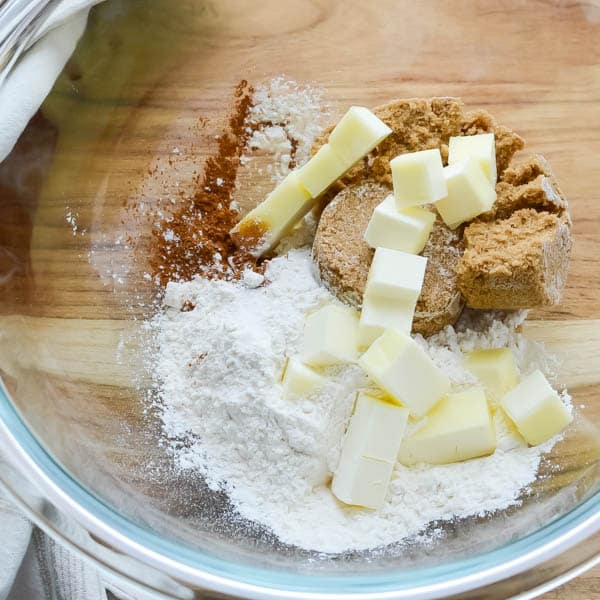 And you won’t be able to get a decent apricot, much less cherries (that aren’t imported from South America) once the kiddies head back to school.  The moment is , right! 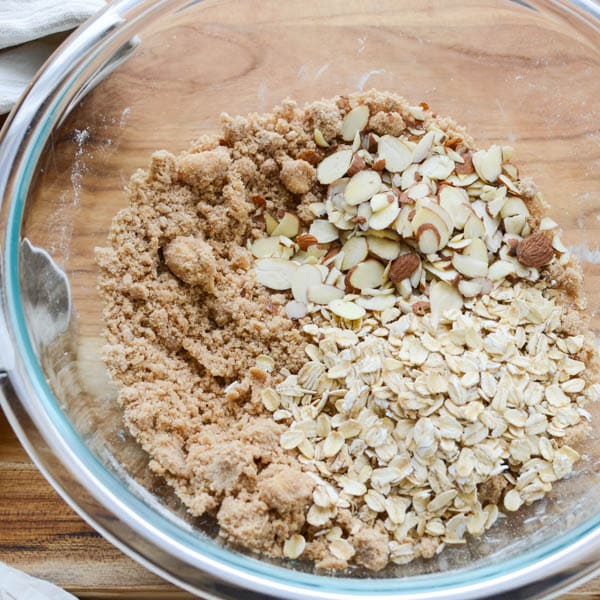 When I was growing up, fruit crisps were a constant in our house.  Probably because they are simple to put together and so homey and satisfying to eat… Like pie, but with more juicy filling – and no infernal dough to roll out. 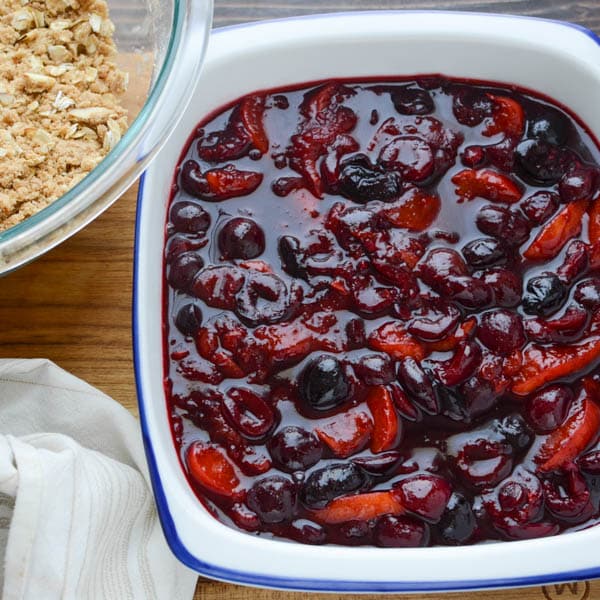 Speaking as a person with a love/hate relationship with pie pastry, I definitely see the advantages of a crisp. 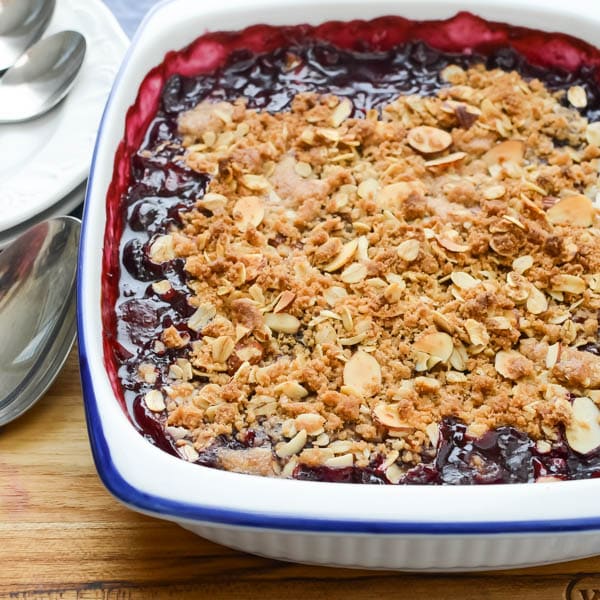 Be warned, this crisp didn’t last long in our house – and it’s just the two of us! 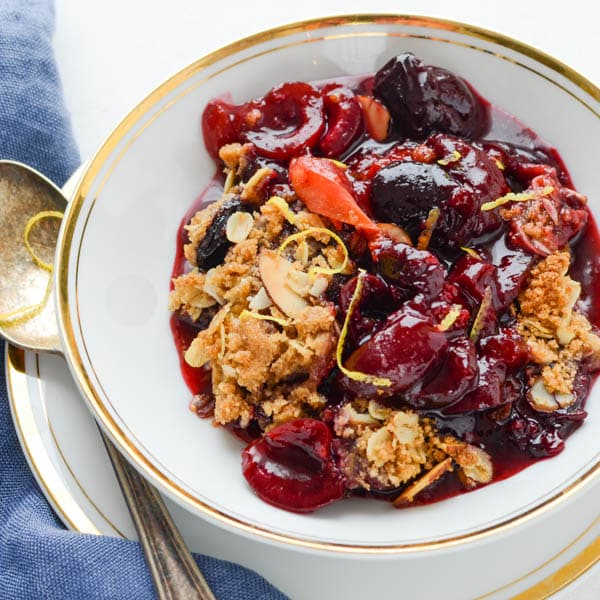 P.S.  It goes without saying that a scoop of vanilla, peach, cherry vanilla or butter almond would  be welcome accompaniments to this fruit-packed dessert. 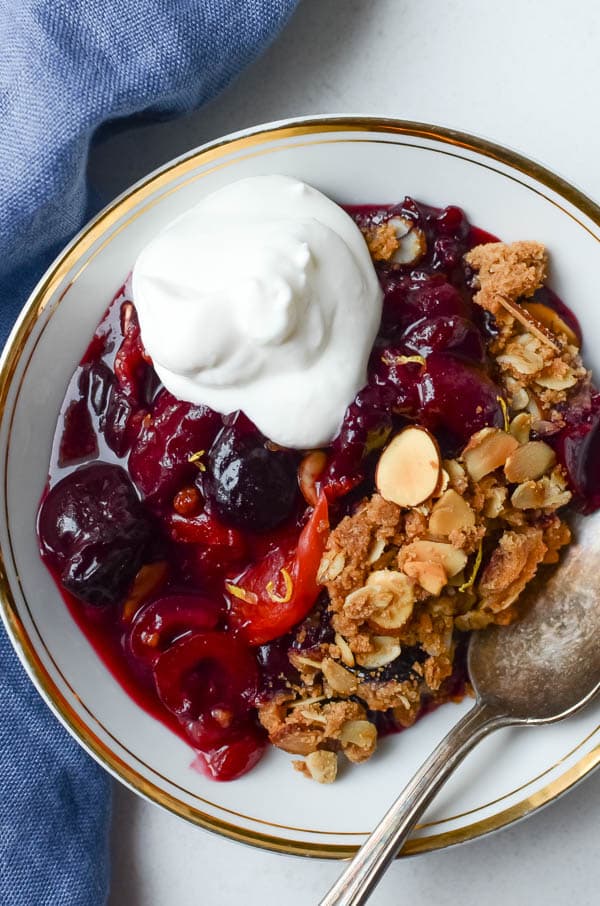 I was out of ice cream, so a little whipped cream (the real stuff) made a irresistibly pillowy topping! 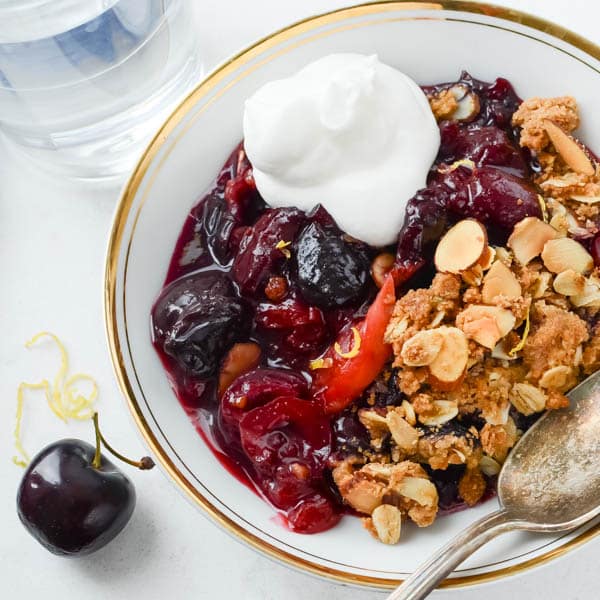 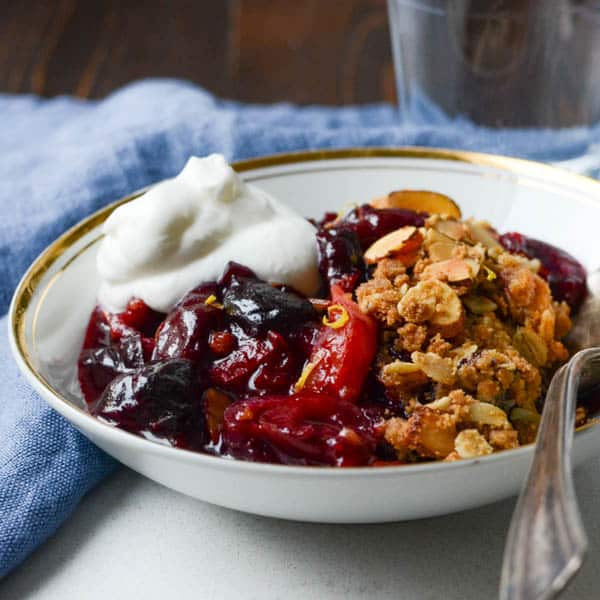 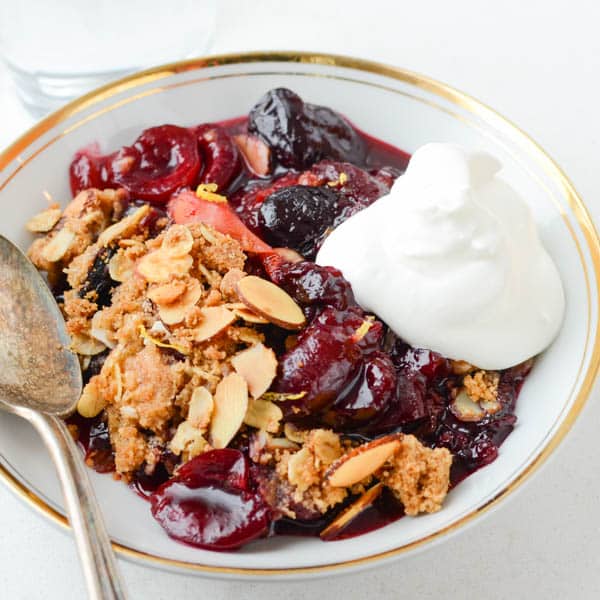 Advantages of arrowroot according to Wikipedia: This starch thickener has several advantages over cornstarch. It has a more neutral flavor, so it's a good thickener for delicately flavored sauces. It also works at a lower temperature, and tolerates acidic ingredients and prolonged cooking better. And while sauces thickened with cornstarch turn into a spongy mess if they're frozen, those made with arrowroot can be frozen and thawed with impunity. The downside is that arrowroot is pricier than cornstarch, and it's not a good thickener for dairy-based sauces, since it turns them slimy.

If You Like Cherry Almond Crisp, also try these: 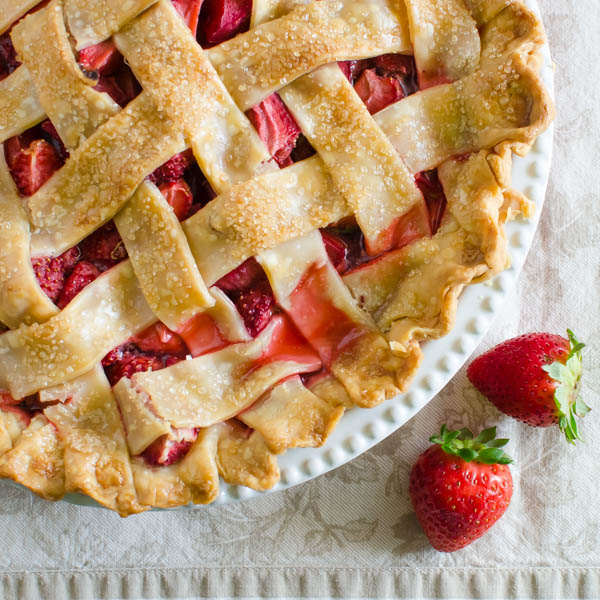 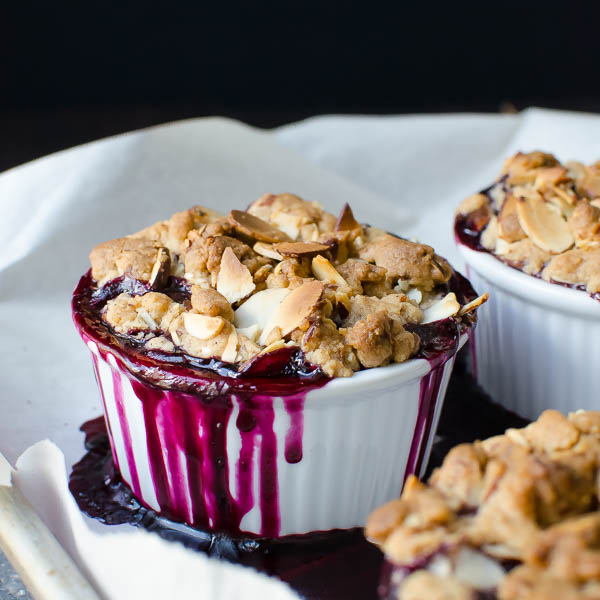