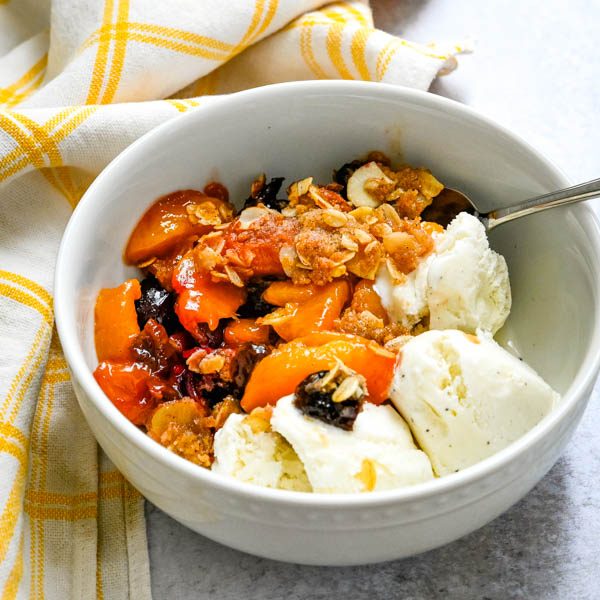 Want an easy peach crisp that goes beyond the ordinary? This Cherry Amaretto Peach Crisp Recipe is one of my favorite peach and cherry desserts because it has a double dose of cherries. Fresh cherries of course, but also amaretto-soaked dried cherries. The tasty cinnamon oatmeal crumble with sliced almonds is the crowning touch to this summery fruit amaretto recipe. 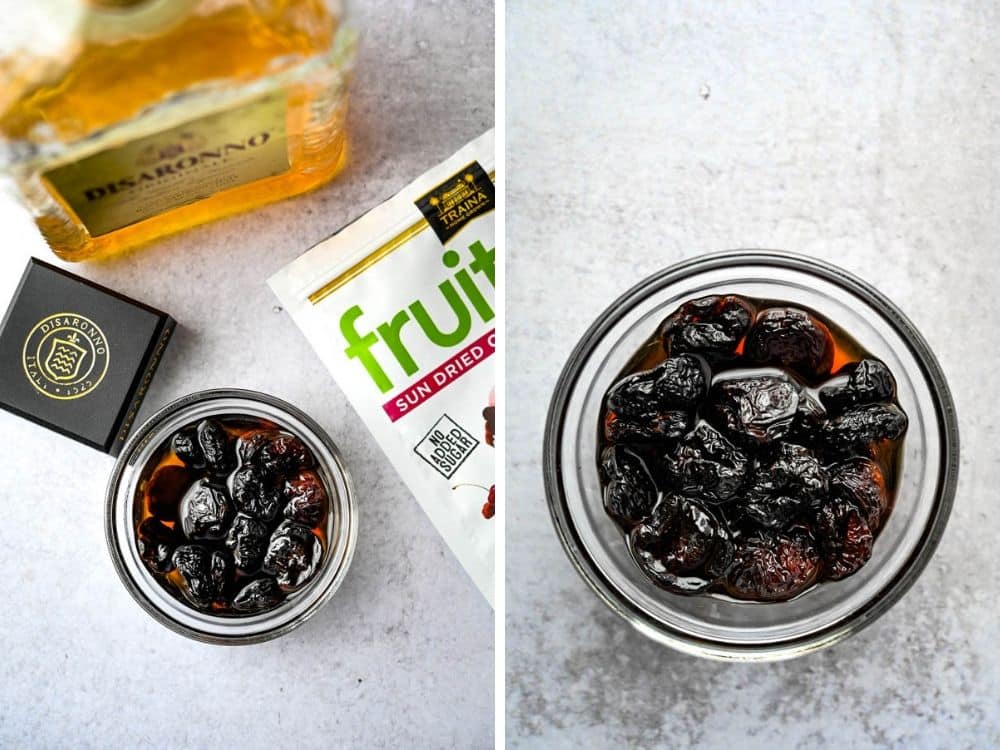 Amaretto is an almond flavored liquor that makes a wonderful after dinner sipper, but I love to use amaretto in recipes like this to add a little boost of flavor to the background of the dish. Dried cherries are sweet, chewy and delicious on their own, but they take on a new dimension when soaked in this almond scented spirit. No, this is definitely not an average peach cherry dessert. 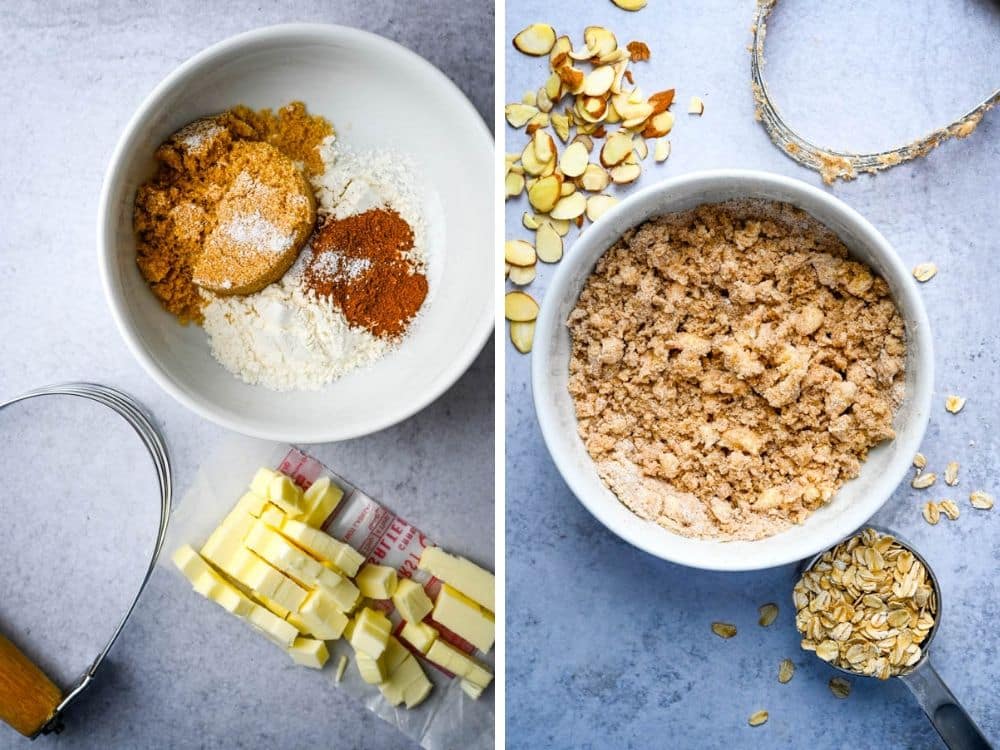 Ok, let’s be honest. The best part of this cherry amaretto peach crisp recipe is the streusely-cinnamon oatmeal crumble.  This makes more than enough crisp to envelop the oozy fruit, which is critical — you want a roughly equal ratio of sweet, spiced crunch to pair with the mellow-oozy fruit. 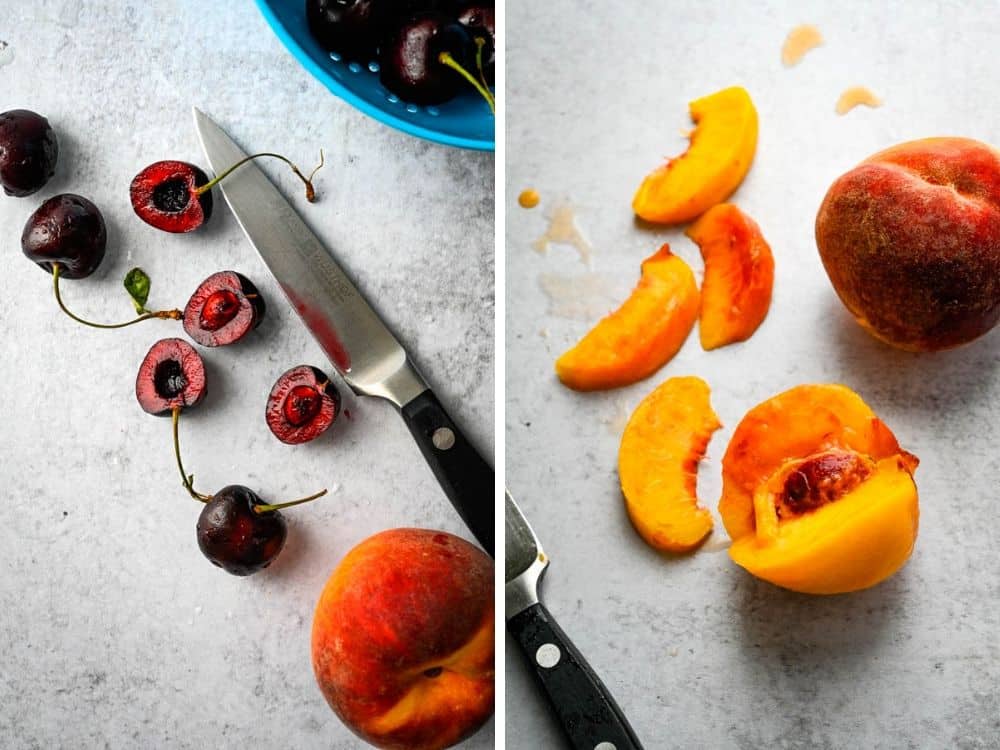 This peach and cherry dessert relies on juicy, sweet ripe fruit, because there’s not a lot of liquid or sugars added to the mix. The natural juices and sugars of the fruit provide most of the flavors, so be sure your fruit is up to par. If not, you may have to add a bit more sugar and/or amaretto (usually in 1-2 tablespoon increments.) 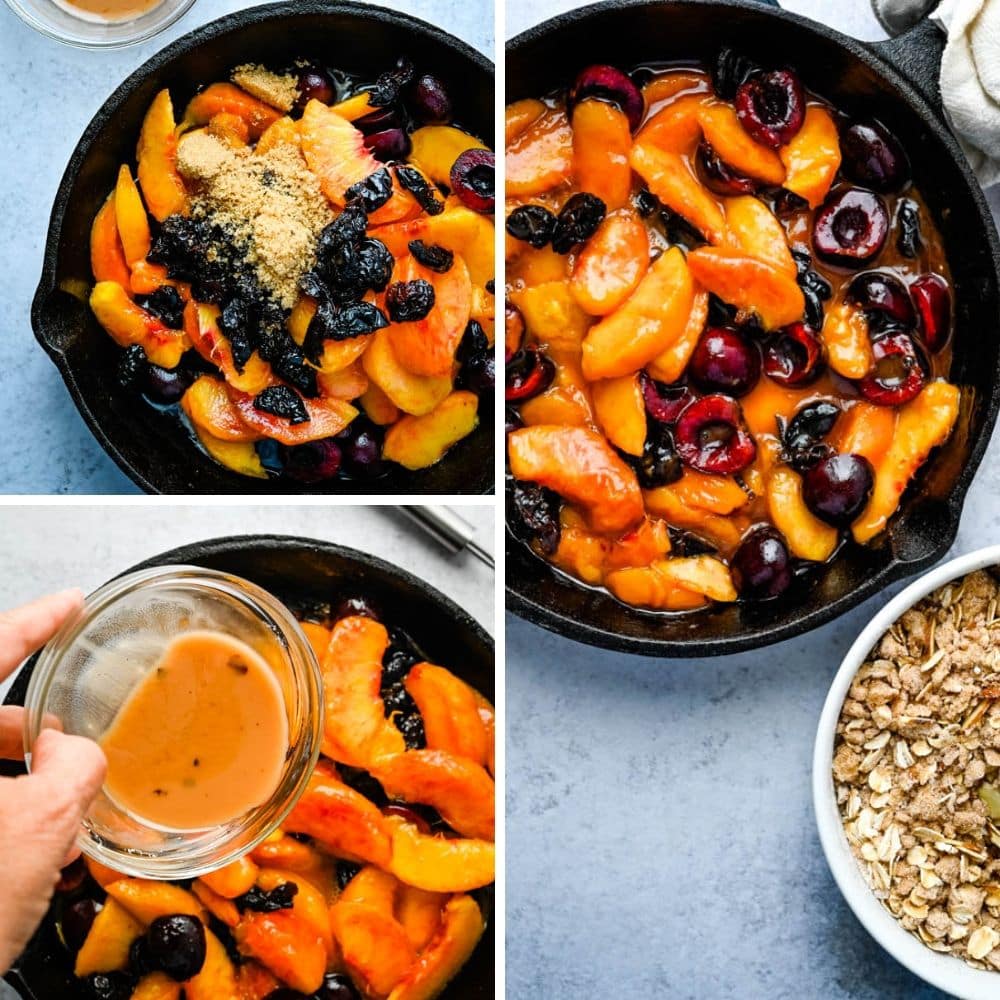 Note: I used a small 8-inch cast iron skillet to simmer the fruit as well as baking the peach crisp recipe. If you don’t have a small cast-iron skillet, you can simply warm the fruit compote with sugar and the amaretto slurry in a small saucepan and transfer it to an appropriate baking dish. 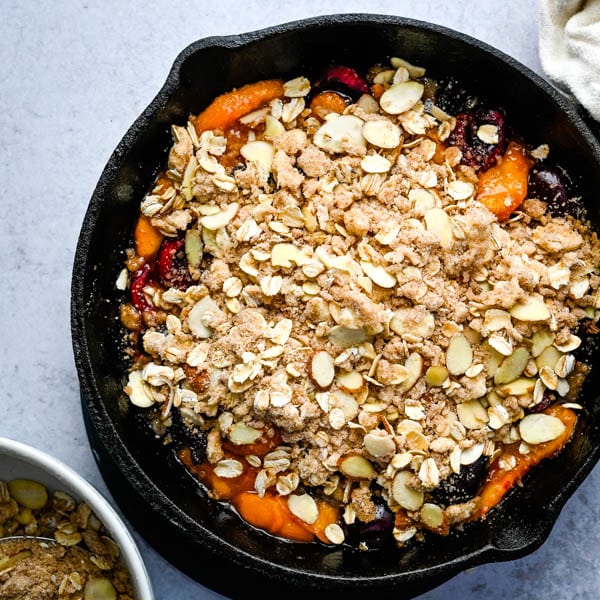 Mound the cinnamon scented oatmeal crumble over the  peach cherry amaretto mixture and bake for 20-25 minutes or until the fruit is bubbly and fragrant and the crisp is golden brown. 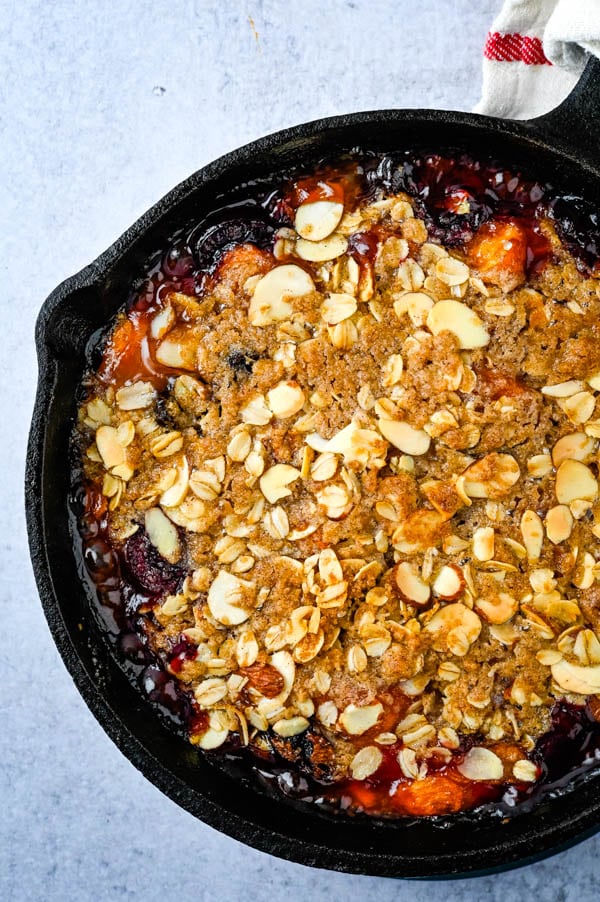 Obviously, this peach crisp recipe is going to be HOT when it comes out of the oven. Let it rest a few minutes before diving into it. You don’t want to scorch the roof of your mouth with molten peach cherry amaretto filling and besides, the wait will give you the opportunity to scoop your favorite ice cream into bowls to serve with the fruit crisp. 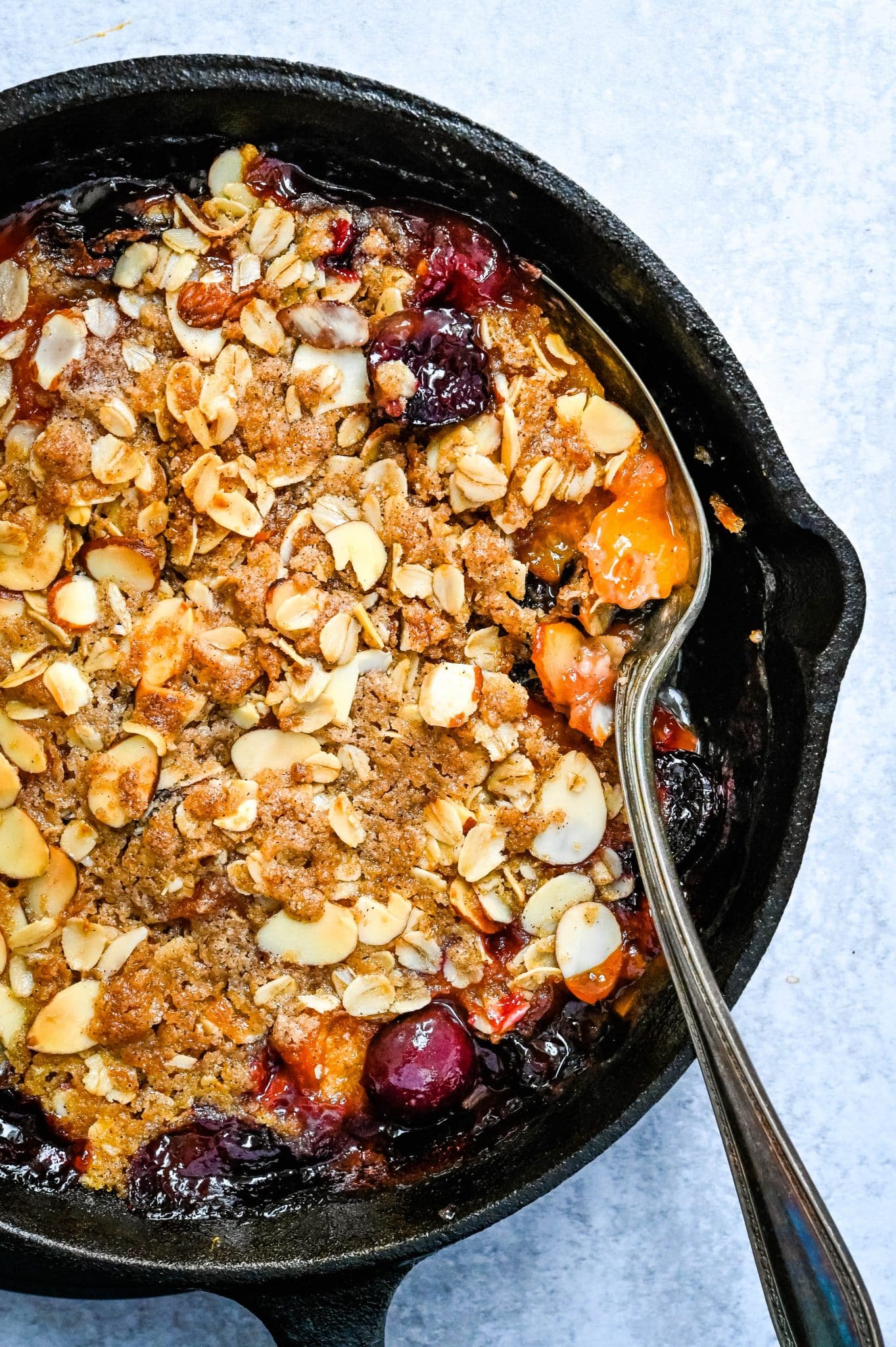 In my estimation, this easy peach crisp is everything we love about summer desserts. It’s simple, homey and not overly sweet. It strikes a balance between indulgence and restraint — well, until you add that extra scoop of ice cream. The crunchy almonds in the streusel topping hint at the glorious Amaretto-tinged fruit filling. Fresh and dried  cherries add sweet, chewy, tart pops to the crisp and the peaches are so floral and juicy that you’ll simply take bite after bite until you’re spent or there isn’t any more left… at least that’s how it works in our house. 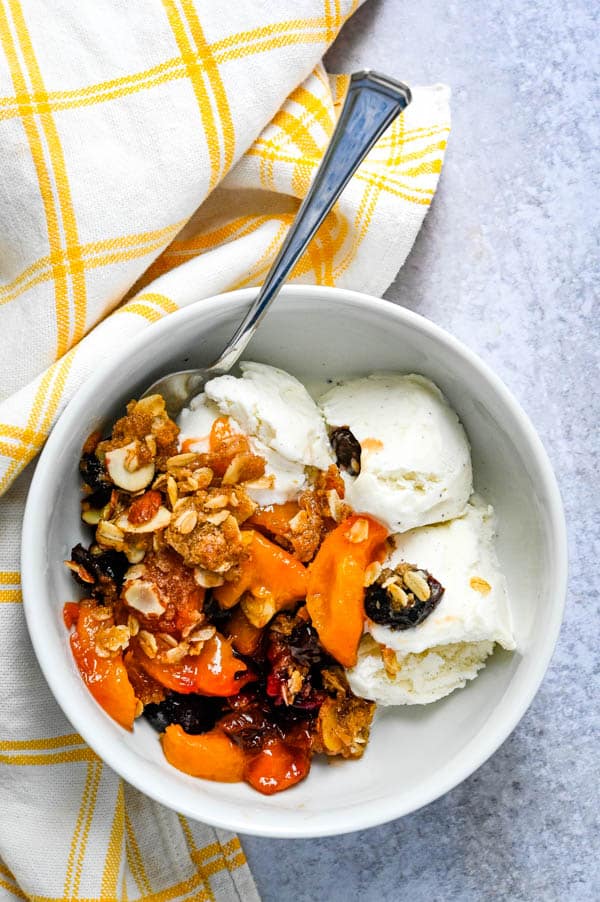 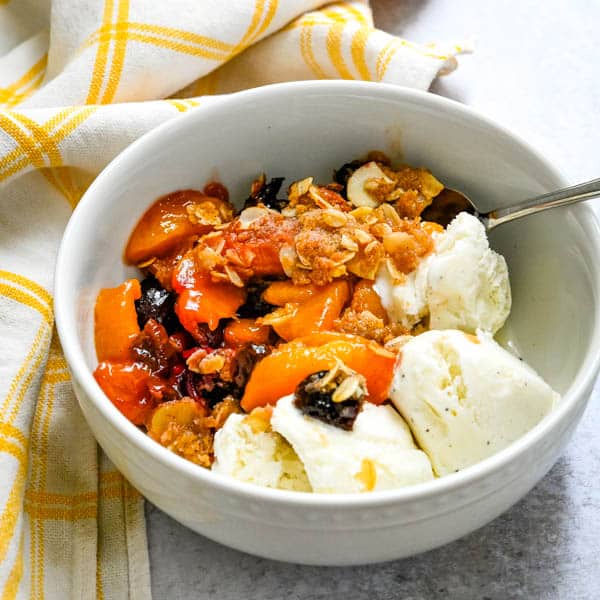 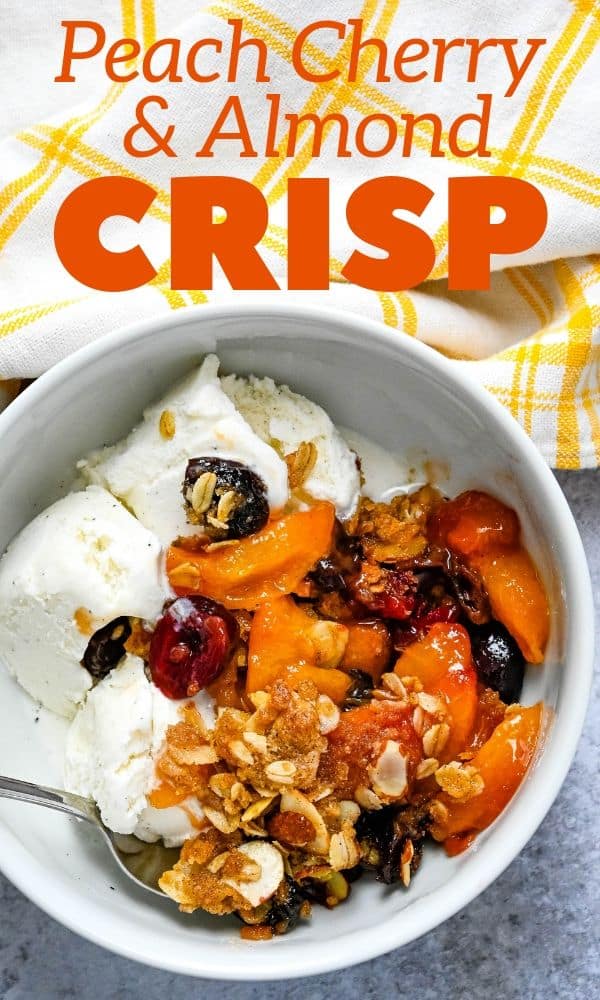