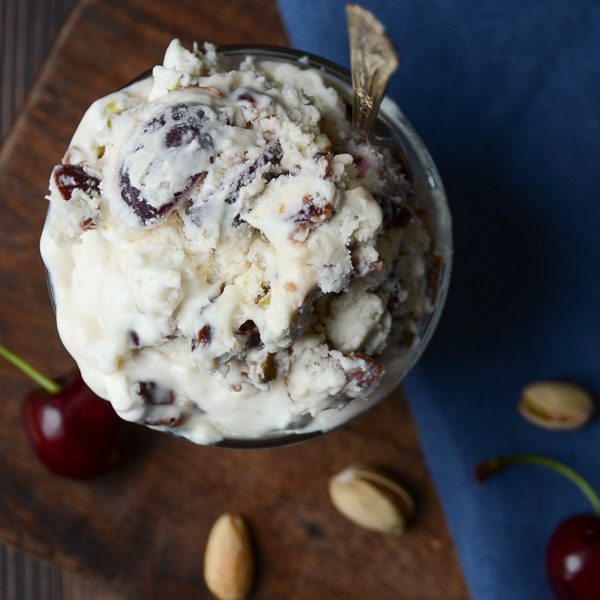 This easy no-churn ice cream doesn’t have any sweetened condensed milk in the recipe. It’s made with a homemade honey nougat that freezes into a very scoop able and rich homemade ice cream that you’ll love. The amaretto soaked cherries and crunchy pistachios give this no churn ice cream recipe an extra layer of flavors you’ll love.

If you think that white fluff in a Milky Way bar is nougat, let me just say uhn-uhn.  Real nougat is a honey sweetened dense and chewy meringue dotted with pistachios or almonds (sometimes, both) sandwiched between sheets of wafer paper — just to make it easier to handle.  It’s the most eye-popping sweet I’ve ever had and I’ve never seen it sold in the states.

My first taste of real nougat was when my grandparents brought some back from a trip to France.  This “candy” wasn’t like the everyday treats you gaze mindlessly at while standing in line at the market.  It was wrapped in clear, heavy cellophane with an embossed gold label.  I could see the waffle-textured wafer paper sandwiching a nut-studded filling.  After my first taste, I was completely smitten.  It’s not candy.  It’s a confection.

And it’s with that memory in mind that I embarked on this cherry nougat crunch ice cream.   I found the recipe in the Ultimate Ice Cream Book by Bruce Weinstein.  That book has been my muse for frozen treats this summer.   As I was scanning its pages, the nougat ice cream was my top pick.  The rest of the family had other ideas, like mint and and a more Southern rendition of Chunky Monkey.  Well, they had their fun.  Finally, my wait was over!

This ice cream is unlike others because instead of a custard base, this is simply meringue and whipped cream (I know, drool…)  It’s incredibly light and airy with an intense hit of honey — and it tastes just like nougat.

Because it’s still summertime and I adore cherries, I also added a double dose of summer fruit.  Fresh cherries, cut into quarters and dried cherries — soaked in amaretto.  Why not?  And nuts are a key component.  It’s not nougat without them.  Almonds and pistachios take it over the moon!

I didn’t use a light touch on my mix-ins here, because I just love lots of textures.  Chewy sweet cherries and crunchy nuts — irresistible!  You must, must, musttry this.  And next time you’re abroad, pick up a bar of the good stuff! 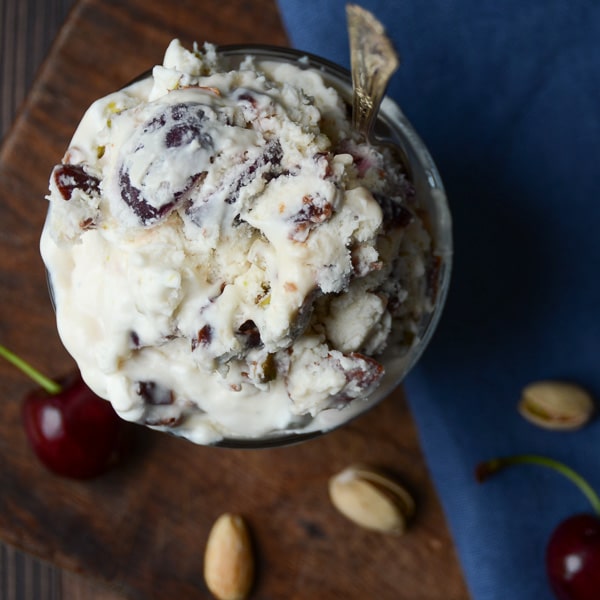