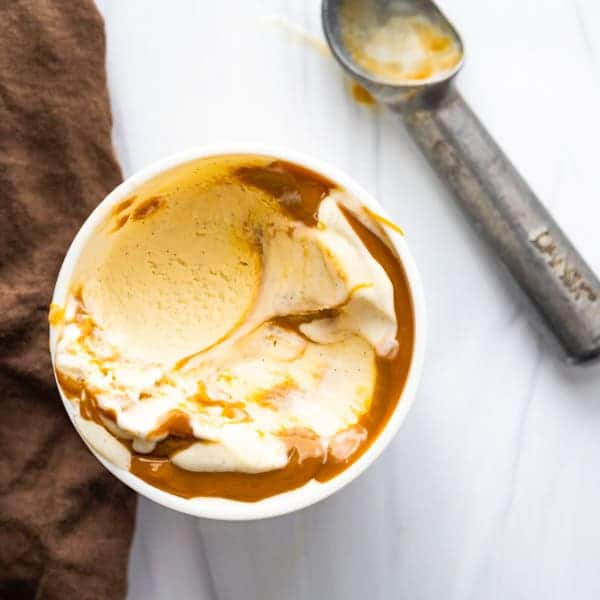 This post contains affiliate links which means if you make a purchase, you’ll pay no more for the product and I’ll make a small commission. Win-Win.

This is no ordinary dulce de leche ice cream recipe. It’s a rich and creamy, vanilla bean ice cream swirled with soft, dulce caramel and spiked with a little dark rum. This caramel rum ice cream is easy to make in your ice cream maker and it seriously rivals the premium brands you’ll find on the market.

Please don’t confuse this with “nice cream” or the various no-churn wannabes out there.

This dulce de leche and rum ice cream is churned like the old fashioned recipes and it’s LEGIT.

No, you don’t have to use rock salt and a hand-crank churn, but you will need an ice cream maker.

Unlike most homemade recipes that give you icy, flat or impossible to scoop ice cream, this one uses a foolproof method that produces the richest, creamiest and frankly… BEST ice cream I’ve ever had. Not an exaggeration.

Before we get to the recipe, let’s talk about dulce de leche.

Dulce De Leche is the same as caramel, right?

Dulce De Leche may have similar characteristics to traditional caramel, however, it’s made with sweetened condensed milk instead of the traditional French method which uses sugar, cream and butter.

Classic caramel is a French creation that dates back to the 1600’s. It’s made by melting sugar and cooking it to a golden or dark brown and then adding heavy cream and butter.

Caramelized sugar is what gives caramel its deep, complex flavor, while cream and butter make it soft and plush.

Dulce De Leche tends to be thicker and more spreadable than caramel (and it works perfectly as a ropy swirl in this rum ice cream recipe).

Depending on your use (to spoon over ice cream or sandwich between cookies) the two can often be used interchangeably.

Dulce De Leche is considered a Spanish delicacy and is very popular in Latin American countries.

To make the dulce de leche, sweetened condensed milk is cooked until the sugars start to brown and caramelize, transforming into thick, creamy dulce.

For this recipe, I recommend making the dulce de leche a few hours ahead of time or even the day before making the ice cream custard. Check out this post for 4 easy methods for making dulce de leche.

Most ice cream recipes start with a custard made with egg yolks. This one doesn’t.

This egg-free ice cream custard avoids the pitfalls of curdling that can occur when tempering egg yolks with a hot liquid (the way most custards are made).

I’ve turned to this way of making ice creams ever since I first tried it and I won’t go back. In fact, I gave copies of her book to my Mom and other ice cream enthusiast friends this past Christmas because I think it’s a game changer.

You can get a copy through my Amazon Affiliate link here.

These are the broad strokes of Jeni’s ice cream making method. I use them in this dulce de leche ice cream as well as lots of other flavor combos.

You’ll need a small and medium sized bowl as well as a saucepan to make the ice cream custard.

So you see there’s no tempering and while this might seem like quite a few steps, none are difficult. It usually takes me about 15 minutes to make the ice cream custard.

I did mention rum for this dulce ice cream, right?

The purpose of rum in ice cream

Rum’s “function” for this recipe extends beyond a flavor enhancer.

Rum also prevents the dulce ice cream from freezing into a solid, impenetrable block that even the most industrious scoop and iron-man arm struggle to cleave.

Use a good golden or dark rum to flavor the ice cream custard. It only needs about 1/4 cup, but that’s enough to give a lush rum component to the dessert as well as preventing the ice cream from solidifying into permafrost.

Bonus, the dulce de leche doesn’t freeze solid in the ice cream, either.

I mentioned before that this is LEGIT, CHURNED dulce de leche ice cream — which means you need an ice cream maker.

Mine is made by Cuisinart {affiliate link} — and while it’s not their top of the line machine, it does an admirable job. I’ve had this one for years and I think we got it for about $70.

I especially like that it’s very user friendly and not over-engineered. (To me, the more specialized the gadget, the more there is to break and/or go wrong).

The only thing you need to remember to do is put the cannister in the freezer overnight. That way, it’s cold enough to to churn and freeze the custard in short order.

If you have a different ice cream maker, just follow the instructions in the manual.

The churning process will simultaneously lighten (adding air into the mixture) and chill the ice cream to a semi-frozen soft serve consistency. In my machine it takes about 20-25 minutes.

Before you begin assembling the rum dulce ice cream, you need to choose a container to store it in.

I found this cool quart sized container, or here’s a larger 1.5 quart version. {both are affiliate links}. You can also use a standard sized loaf pan (metal, not glass) to assemble.

The waiting is the hardest part

I know… just when you’re ready to dive in with a spoon, it needs to freeze again. Boo. Hiss.

That said, you’re the cook, and there’s absolutely no reason you can’t grab a spoon and scrape out every inch of the ice cream that’s still stuck to the canister and use your best rubber spatula to remove every scrap of dulce from the storage container.

Consider it your reward for a job well done.

You won’t find a rum/vanilla/dulce de leche ice cream combo out there in the supermarket or in specialty shops (at least not that I’ve seen), but it’s sublime.

It’s so creamy, so rich and so full of that decadent caramel-y dulce that you can’t take a bite without getting a luscious swirl.

The rum flavors the dessert, but not in an overpowering way. In fact, it makes the simple vanilla custard more nuanced and tropical.

You’ll love the way this home churned confection scoops so easily, even straight from the freezer — and unlike most of those measly “pints” of premium ice cream, this recipe makes a full QUART of dulce de leche splendor.

Can I skip the rum?

Yes. It won’t be as easy to scoop, but you can skip the alcohol.

Can I make the custard in advance?

Yes! And I’ve done this several times. The custard will keep in the refrigerator (with the plastic wrap seal) for up to 5 days. Then you can make the ice cream at your leisure.

How long will the ice cream last in the freezer?

In my experience, not long — but that’s because it just gets eaten so fast. Theoretically (and I have to use theoretically because it’s never happened to me) it should keep well (covered and frozen) for up to 2 weeks in an airtight container.

FOR THE VANILLA RUM ICE CREAM:

TO CHURN THE ICE CREAM: