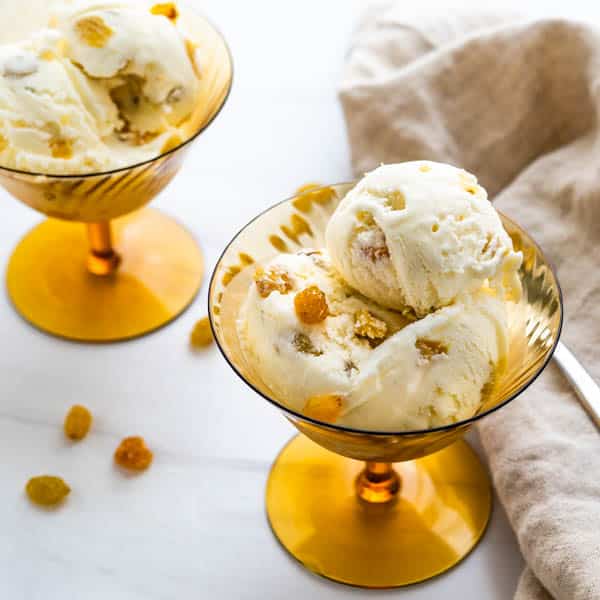 This post contains affiliate links which means that if you make a purchase, you’ll pay no more for the item, and I receive a small commission. Win-win!

For the creamiest, dreamiest, eggless rum raisin ice cream, look no further. This one is the best. This rum raisin recipe uses alcohol in two ways. First, to soak and plump the raisins and in the homemade ice cream custard, for a double hit of boozy, creamy, brain-freeze inducing rum ice cream that you can scoop straight from the freezer.

Rum raisin ice cream has been a favorite of mine since I was 4 years old. My grandmother tells a story that I would always ask for “wum wayzin” whenever she and Grandad treated me to a cone from Baskin Robbins. My love of rum ice cream with sweet rum infused raisins hasn’t dampened in the years since (maybe it’s gotten stronger) and this rum raisin recipe is the best I’ve ever had. I think you’ll agree.

Wait. Where are the eggs?

You’ll notice that there are no eggs in this rum raisin recipe, which makes the custard even easier to prepare.

Instead of tempering eggs for a standard ice cream custard (a fickle process that can sometimes lead to scrambled eggs instead of smooth, creamy ice cream base), this easy blend uses a different process and thickening agent.

Is this no-churn ice cream?

That said, you don’t need any fancy equipment to make this. I use an inexpensive Cuisinart ice cream machine {affiliate link}. The kind with the freeze-able canister.

Jeni Breton Bauer (of Jeni’s Splendid fame) has an ice cream cookbook that I’ve read from cover to cover. It’s her basic method that I used to make this rum raisin confection.

If you try this and like it, I’d encourage you to get her book {affiliate link}, which has tons of inspirational ice cream flavors.

I’ve found her method to be easier, more foolproof and it makes the BEST ICE CREAM I’ve ever had. Here’s how it works:

While the rum ice cream custard is chilling, macerate the raisins.

What’s macerate? Macerate simply means “to soak in a liquid to soften” (and in this case, plump) the raisins.

Just heat water, sugar and rum together until the sugar is completely dissolved and pour the mixture over the raisins to soak. The raisins will soften and plump in the rum syrup. They also take on a glacée effect and become a little chewier.

Be sure to strain the raisins from the simple syrup BEFORE adding them to the ice cream maker.

Note: The raisins don’t get added to the rum ice cream until the last 2 minutes of churning, just to blend them evenly into the mixture.

What to do with the leftover rum raisin simple syrup?

Macerating the raisins in the simple syrup not only plumps the fruit, it also infuses the syrup with a distinct rum raisin flavor. It’s too good to toss, so here’s some ways to use the leftover simple syrup:

Why you’ll love it

This is real ice cream. Not “nice cream” or a wannabe. Not a low-cal version of the real deal. It’s classic, authentic, churned, eggless, rum ice cream that melts in a creamy puddle on your tongue. The chewy, glacéed raisins spiked with more of that smooth rum are the BOMB dot COM!

Unlike many homemade ice creams, this one is velvety smooth and not at all grainy or icy.

Because this recipe includes a shot of rum in the cream custard, the ice cream won’t freeze into a rock-solid pack.

In fact, it’s easily scoop-able right from the freezer. Just based on THAT FACT alone — I recommend adding alcohol to every ice cream you make in the future.

My tasters couldn’t get enough. The ice cream is velvety smooth with a noticeable rum flavor. The macerated raisins are chewy, sweet and add another layer of boozy goodness.

This recipe makes a solid quart of rum ice cream, instead of a measly pint.

Have I sold you yet? Go on. Make it for yourself. See what the fuss is about.

FOR RUM ICE CREAM BASE: