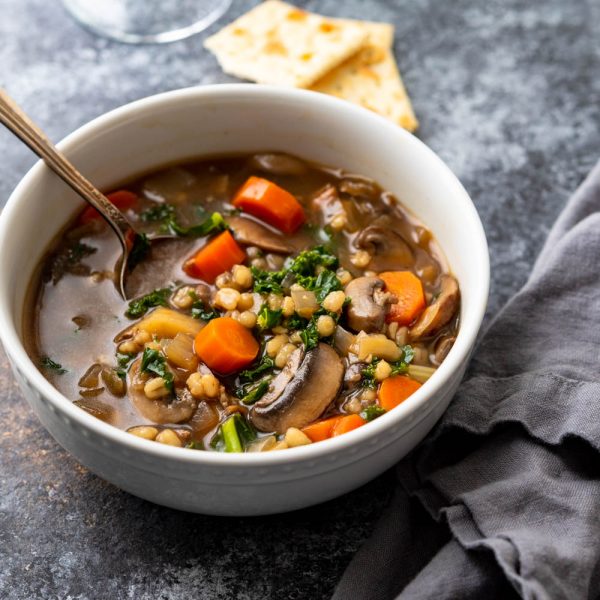 Barley and Mushroom Soup
You'll love the flavors in this hearty Mushroom Barley Soup. It's naturally vegan, but the mushrooms and toothsome barley make it feel meaty. Kale adds a boost of nutrition. This soup is a great way to get kids to want to eat their vegetables.
Total: 1 hour
JUMP TO RECIPE PRINT RECIPE
Home | Recipes | Soups, Stews & Braises | Amazing Vegan Mushroom Soup with Barley & Kale
853 shares

This hearty vegan mushroom soup recipe makes a healthy, satisfying pot of heart-warming goodness. It’s made with 3 types of mushrooms, pearl barley and curly kale for extra chew and nutrition. You can make a whole pot of this healthy barley vegetable soup in about an hour and it holds up well in the refrigerator, so you can enjoy it all week long.

Whether you’re cutting back on your meat intake or are a full-on vegan, this barley mushroom soup is a great option.

Mushrooms are prized for their meaty texture and deeply satisfying umami flavors. Therefore, they’re an excellent choice for my barley vegetable soup recipe. With three different mushroom varieties, the fungi are the standout, flavor wise.

There are over 10,000 different types of mushrooms, but not all of them are good (or even safe) to eat. Here’s a list of the most common varieties of mushrooms as noted by Country Living magazine. For this recipe, I’ve stuck to the most readily available and least expensive ones.

You could use just one variety of fungi for this recipe, but you’ll miss out on the depth of flavors. I used 3 types for this mushroom barley soup.

White or Button Mushrooms are the old reliable standard we all find in the grocery stores. They’re mild and savory and cook up to a meaty texture.

Cremini – are just older versions of the button variety. They’re a little more flavorful and earthy.

Porcini (cepès) – can be enjoyed fresh or dried and are a big part of French and Italian cooking. Dried porcini add tons of flavor to broths and stocks.

You can certainly use other types of mushrooms for this recipe (chanterelle, oyster, even the tender caps of shiitakes or hen of the woods). However, some of the fancier varieties can get a bit pricey, so I’ve stuck to these relatively inexpensive and easy-to-find ‘shrooms for this barley soup.

Dried porcini need to be rehydrated before adding them to the barley vegetable soup. Therefore, you’ll want to start the porcini soaking in boiling water first and then start on the rest of the recipe.

You’ll use both the mushrooms and their soaking liquid in the vegan mushroom soup to give it a really deep ‘shroom flavor.

I like to give the dried porcini a good long soak, so they’re really tender. Just pour boiling water over the dried mushrooms and let them rest for half an hour.

I recommend using a dutch oven with a tight fitting lid to make this recipe. If you don’t have one, use a heavy, lidded stock pot to make the soup

When you hear the term aromatics, you naturally think of onions, garlic, celery and carrots which are a mainstay for most soup recipes. They make up a big part of this vegan mushroom soup. but I’ve also included some more unique flavors with fresh leeks and parsnips.

Leeks are alliums like onions or garlic, but with a softer, less stinging odor and flavor.

Their stems look like tightly bundled leaves that create an ombre effect from top to bottom, starting with a dark green crown that subtly transforms to a creamy white color.

You’ll only use the pale green and white parts of the leek and they’re not usually eaten raw, but instead are sweated, sautéed, or braised to soften them.

The key to working with leeks is to make sure you remove all the dirt and grit first.

When leeks grow, dirt becomes embedded between the layers and is trapped, therefore, leeks need to be well cleaned before cooking with them.

How to clean leeks

Note: if you don’t get all of the dirt out during the first rinse, change the water and rinse several more times before sweating them for the mushroom barley vegetable soup.

Parsnips are a root vegetable that date back to Greco-Roman times and have an herbal sweetness to them. Actually, parsnips used to be used a sweetener before cane sugar was imported to Europe.

While they’re similar (and related) to carrots, their white flesh and distinctive taste set them apart from its more commonly known cousin.

Parsnips add unexpected sweet, earthy pops of flavor to the mushroom and vegetable soup. Their creamy color might fool some diners into thinking they’re potatoes on first glance, but their taste is unique and unmistakable.

To finish the soup, season it with balsamic vinegar and soy sauce and stir in the chopped kale leaves.

Soy sauce adds a salty, umami richness that intensifies the mushroom flavor in this vegan soup.

Balsamic vinegar adds a little sweetness and a tangy note that ties together the flavors with the vegetables and barley in the soup.

Kale is sturdy and ideal for this vegan soup. It pairs well with mushrooms and retains its hearty chew in the soup. Kale is bright green right after its added to the mushroom soup, but will fade to a dull grey/green after an hour or so. That’s fine, it’s still good.

Add a rind of parmesan cheese to simmer while the barley cooks. This adds even more umami richness. Sprinkle with extra shredded parmesan to serve.

This soup is so warm and satisfying. The mushrooms make this vegan soup seem meaty and rich.

The pot is loaded with colors, textures and deep umami flavor with a balancing sweetness.

Carrots and parsnips hold their own in the broth and the kale ebbs to a soft, chewy bite.

To me, barley makes the whole soup feel indulgent, like pasta but with the heft and nutrition of ancient grains. Plus you gotta love that mouth-feel.

How long will the soup last?

The vegan mushroom soup will last for up to a week in the refrigerator.

Absolutely. Just portion it out into 8 separate containers and reheat in the microwave or on the stovetop for a quick, healthy meal anytime.

Yes. You can freeze it in a large batch or in individual servings. Kale will lose its vibrant color, so if you want to keep it “fresh”, stir in the kale when you reheat the soup.

TO REHEAT THE SOUP:

(note: for more richness/saltiness add a bouillon cube and cook until it’s completely dissolved in soup.