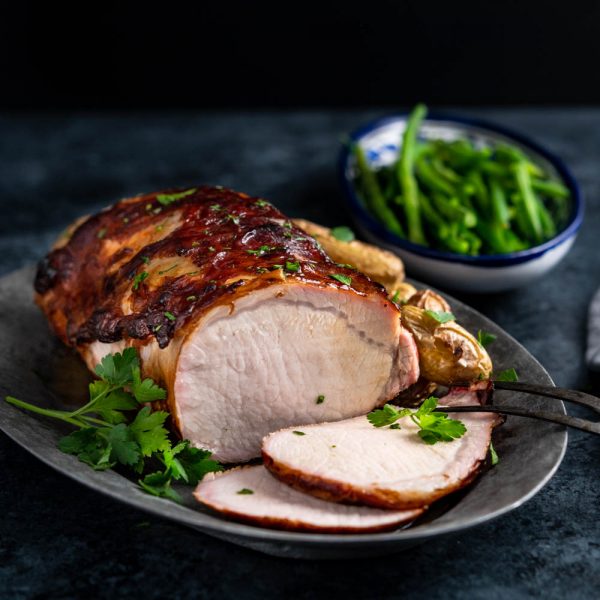 Want a juicy, tender, brined smoked pork loin? It’s easier than you think. Soaking the meat in a simple bourbon apple cider brine for a couple of hours and smoking it with real apple wood chips or chunks gives you a moist, tender, uber-flavorful roast. Instead of a long smoke at an ultra-low temperature, this smoked pork loin recipe is cooked at an even 350° and is ready in a little over an hour.

Scott and I have been making this smoked pork loin recipe for about 3 years and it’s one of our go-to’s because it’s simple to make and always juicy with a meaty, smoked flavor. When you bring this roast to the table, eyes go wide and tummies grumble in anticipation. That’s not an exaggeration.

The difference between pork loin and pork tenderloin

Before we get to the recipe, you may be wondering if a pork loin and pork tenderloin are the same thing. No. They’re not. And it’s important to know the difference.

Pork loin is a larger, thicker cut that comes from higher up on the back of the pig. A whole pork loin can weigh between 6-10 pounds. Pork loins can be cut into smaller roasts or even individual chops.

I’ve found pork loin to be a very economical cut of meat (I source mine at Costco and can usually get a whole pork loin for about $20-$25). At home, I cut the pork into roasts and chops, and even chunk the uneven trimmings for kebabs, soups and stews.

Pork tenderloin, on the other hand, is a much smaller cut and it comes from beneath the pork loin. It has a deeper red color and is the most tender cut from the pig.

They usually weigh between 3/4 pound to one pound and are great for quick grills and sautés with rubs and marinades. You can cook a whole pork tenderloin in about 20 minutes flat.

For this recipe, you’ll need a 3-4 pound pork loin roast, preferably center cut (i.e. it’s not tied with a string).

This easy apple cider brine comes together in minutes.

Note: Cool the cider brine to room temperature before brining the meat.

I like to put the roast in a zip top storage bag and pour the brine over the top, squeezing the excess air out of the bag so the meat is completely submerged. Just be sure the brine is at room temperature before adding the meat — you don’t want to poach the pork.

This simple apple cider brine with whole spices, kosher salt and a splash of bourbon infuses the smoked pork loin with flavor and ensures that the pork stays moist, tender and juicy as it cooks.

Don’t over brine the roast. Too long in the brine will actually have a negative effect, making the flesh soft and mealy.

How long to brine pork loin

Unlike larger cuts, a 3-4 pound pork loin only needs to brine for a few hours. Two to three hours is plenty of time.

Best wood to use for smoked pork loin

Apple wood, cherry, pecan and hickory are all good choices. You can even use oak. Avoid mesquite, though, as it’s too strong for the mild flavor of pork loin.

You can use wood chips or wood chunks {affiliate links} to smoke the pork loin roast. I’ve made it both ways and personally have found wood chips to be a little easier to work with than wood chunks. Here’s the difference:

Wood chips need to be soaked in water for about an hour and then transferred to a smoker box or a pouch made from heavy duty tin foil, poked with holes to set over the heating elements of a gas grill. If you’re using a charcoal grill, you can simply sprinkle the wood chips directly over the embers.

Most experts agree that wood chunks don’t need to be soaked before using, however, dry wood tends to catch fire when placed on or near charcoal embers. If using wood chunks, I’d advise having a squirt water bottle handy to put out any flames that spring up.

How to smoke a pork loin

You don’t have to have a special smoker to smoke a pork loin roast. In fact, I’ve made this smoked pork loin recipe on my gas grill, in a regular kettle water smoker, as well as on a charcoal grill. Of course, if you have an electric pellet smoker, you can also use that according to your manufacturer’s directions.

My husband likes setting up his old-school Weber charcoal grill in the back yard, so that’s what we did for this brined smoked pork loin.

This pork loin roast was about 4 pounds and took about 1 hour and 15 minutes to reach the proper internal temperature, but the timing is not absolute. It will depend on the grill temperature and weight of the smoked pork loin.

What’s the safe temperature for pork?

The safe temperature for cooked pork is 145° F or 62°C, however, the meat will continue to cook after you’ve removed it from the grill, so pulling it off a few degrees early is fine.

I actually got a little closer than I’d like on this one. At 144°F, I was slightly nervous that the meat would end up overcooked, but then I remembered the brine. That apple cider brine is a failsafe against dry, overcooked meat. It keeps the smoked pork loin very tender and juicy, even when you’re flirting with the upper range of cooking temperatures.

Be sure of your temperature

To verify the actual doneness of your smoked pork loin, I recommend a good instant read thermometer. My favorite and the one I stand behind, is the Thermoworks Thermapen One {affiliate link}.

This reliable instant read is remarkably accurate within seconds, has a backlit screen for night time grilling and smoking and folds discreetly away in your kitchen drawer (so you don’t inadvertently stab yourself) which has been known to happen with lesser designs.

The Thermapen isn’t cheap, but it’s the only instant read thermometer you’ll ever need.

Once the correct temperature has been achieved, transfer the smoked pork loin to a cutting board and lightly tent it with tin foil and allow the roast to rest for 10-15 minutes.

Resting the meat allows the juices to redistribute throughout the flesh.

If you cut into it too early, the juices will spill onto the cutting board instead of staying in the roast. Patience pays dividends.

This is a quick smoked pork roast, so you won’t get the distinct red smoke ring around the edge of the meat that you usually find with slow-smoked BBQ. However, you’ll definitely see a light pink hue, around the perimeter indicating that the smoke has permeated the flesh. The photo below shows it in a little more detail.

What to serve with smoked pork loin:

This roast is super tender and juicy with a distinctive smoked flavor that’s irresistible. Any leftovers make great sandwiches, can be chunked into casseroles or diced for a smoky hash. 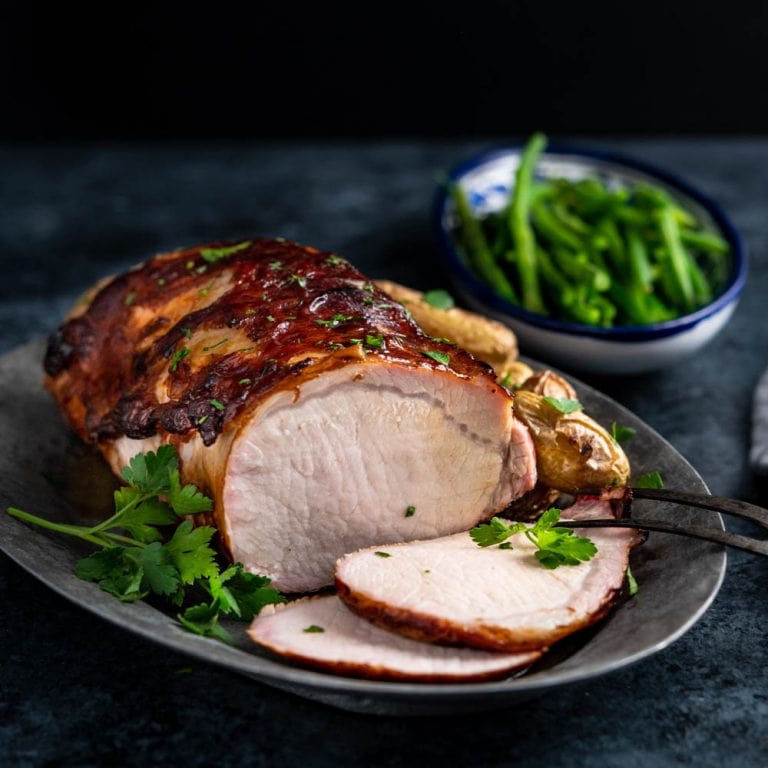 FOR THE PORK ROAST:

SET UP THE GRILL/SMOKER:

FOR A GAS GRILL:

FOR A CHARCOAL GRILL: