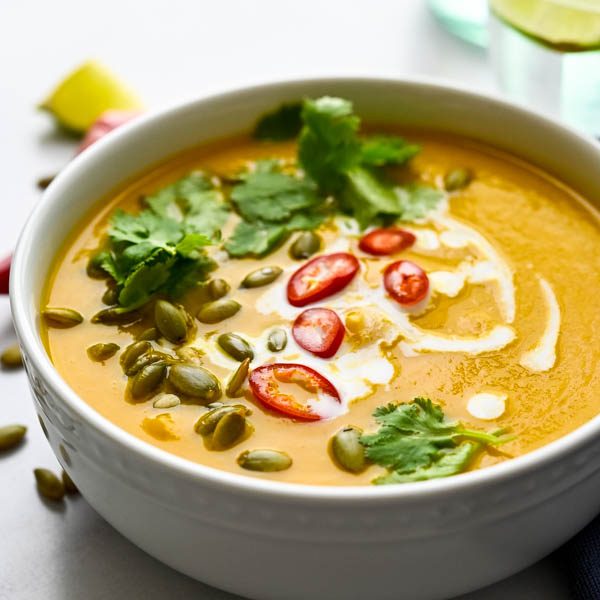 If you love creamy pumpkin soup or creamy squash soup for that matter, this Thai Style Pumpkin Squash Soup is ah-mazing! With Thai style ingredients like coconut milk, coriander, red chiles and lime, this velvety blend will dance all over your tongue and did I mention it’s healthy? Gluten-free, Dairy-free & Vegan. Whoa!  This pumpkin soup with canned pumpkin and roasted butternut, acorn and delicata squash is vibrant and delicious. Don’t forget the garnishes, they make the dish!

We’ve all had those pureed butternut squash soups and loved them for their silky, sweet texture and flavor. This creamy squash soup goes a step beyond because it uses multiple types of squash  — and a can of pumpkin puree (not pumpkin pie filling) for a luscious, satiny soup that’s nothing like your Momma’s recipe.

Delicata – a.k.a. sweet potato squash for it’s brown sugar flavor, this squash is like a cross between fresh corn and pumpkin pie.

Acorn (or Carnival) – Mild and buttery, it’s similar to pumpkin, but sweeter.

Pumpkin – Earthy, not sweet — and nothing like those pumpkin spice lattes from Starbuck’s. Note, I made this pumpkin soup with canned pumpkin only because I didn’t have a whole sugar pumpkin, but I did have the canned stuff.  Feel free to use fresh or canned in this recipe. (If you use fresh, prepare it the same way as the rest of the squash.)

Despite being winter type squash, each of these beauties does have distinctive flavors, which will blend together beautifully in this creamy pumpkin squash soup.

I don’t know about you, but sometimes wrangling squash can be a chore. They can be tough to cut into chunks because the texture is so hard, and the ones with those cute little ridges are a P.I.T.A to peel. Agreed? To avoid the cuts, scrapes and inevitable profanity, roast them. Roasting concentrates the flavors, making them deeper and more pronounced, plus the area of the squash that actually touches the pan will get a nice, sweet caramelized finish, which also adds to the soup. Instead of having to peel the squash, you just scoop out the tender flesh, and save your knuckles from injury.

How To Roast Squash For Creamy Pumpkin Squash Soup

While the squash cools, we’ll get the real flavors going for the creamy pumpkin soup by gently sautéing the onions until they’re tender and translucent, and then adding the spices and fresh grated ginger. Cook for about a minute longer, until the mixture is very fragrant and then get get ready to make the soup.

What Are Thai Style Flavors?

What do I mean by Thai style flavors? Well, by using ingredients that are typically found in authentic Thai dishes, we infer the flavor profile onto the new dish, despite the fact that it isn’t an actual Thai recipe. Read more about that in this article: What Do Chefs Mean By Thai Style?  Based on this read, I’m feeling reasonably comfortable calling this Thai Style Pumpkin Squash Soup.

Other Non-Traditional Seasonings & Spices Used In This Recipe:

I know what you’re thinking… She’s gone off the rails. Cinnamon and allspice? Maple Syrup? It’s not a pumpkin pie… Cayenne? Cilantro? What kind of  1960’s Magic Mushroom trip are you ON?  All I can say is that the sum of its parts are greater than the individual. It’s GOOD. Trust me.

There are two ways I’d recommend to turn this into a creamy, silky soup.

How To Blend Soup In A Blender

One taste of this soup will make your entire mouth do a happy dance. It has a little something for everyone. The spicy kick from the cayenne, spices and fresh ginger is lively — more so if you do use the fresh red chiles for garnish. The luscious blend is also sweet and tangy at the same time. Fresh cilantro brightens it up and the crunchy pepitas add just a bit of texture. This Thai style creamy squash soup has so much going on, you’ll never get bored. This makes a great healthy, dairy free, gluten free, vegan meal or starter soup to a bigger meal. 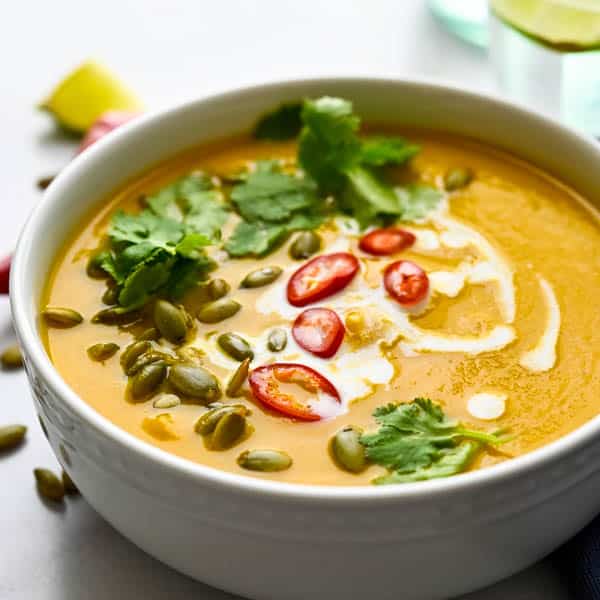