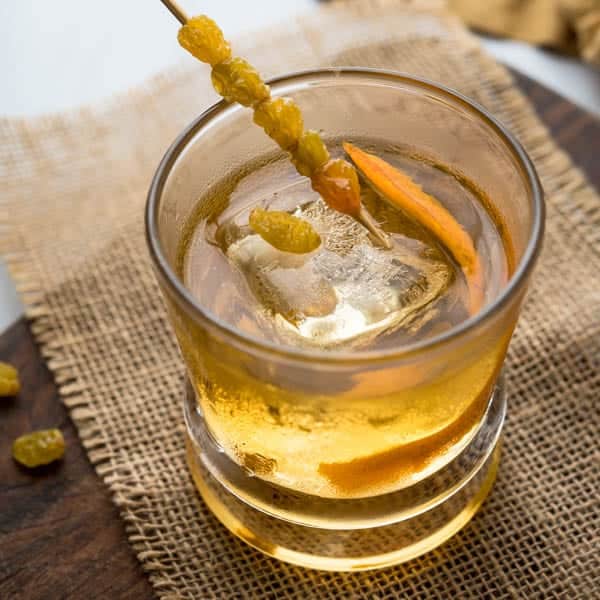 Traditional old fashioned cocktails are made with whiskey or bourbon. This modern twist on the classic uses golden or dark rum for sublime fall and winter rum cocktails. This spiced old fashioned is both modern and familiar. Flavored with rum raisin simple syrup, allspice dram, two types of bitters and golden or dark rum, this easy rum and raisin sipper is permeated with cozy seasonal spices.

Secret to a spiced old fashioned

Soooo… this wintery rum cocktail has taken me down a rabbit hole. It started innocently enough — I made a rum raisin ice cream (coming soon to the blog) and plumped the raisins in a rum-spiked simple syrup. Obviously, I used the raisins in the dessert, but then I tasted the leftover syrup… OMG. Tastes JUST LIKE RAISINS. Hello, COCKTAIL TIME…

I’d like to introduce you to my special rum and raisin spiced old fashioned. It’s round and mellow, fruity and citrusy with a holiday-esque spice that’s very unique and easy to sip. The key to this drink (aside from raisin simple syrup) is the secret ingredient…

Allspice dram is the powerhouse ingredient behind this rum and raisin cocktail. It’s potent, too. Made from a long steep of cracked allspice berries, rum and cinnamon, blended with brown sugar simple syrup, this dram is SPICE FORWARD.

Spiced old fashioned for the holidays

You’ll usually find allspice dram in fun tiki drinks and fruity, island cocktails, but the prominent spice blend plays well in fall and winter beverages like my spiced rum old fashioned, too. After all, the main ingredients are allspice and cinnamon. The spiced dram changes this rum old fashioned into a craft cocktail, custom made for holidays. Careful though, just a hint of dram is all you need.

You can buy St. Elizabeth Allspice Dram at Total Wine for about $22 for 375ml or make your own. That’s what I did.

The allspice dram recipe I used, came from my friend, Sue Moran who blogs over at The View From Great Island. Click on the link to make your own and thanks, Sue for sharing!

This vibrant tincture isn’t difficult to make at all (and it probably takes less than 10 minutes of hands-on time). The only thing required is patience, because it takes about 5 days of steeping before spiced dram is ready to use for rum old fashioneds .

In the end, you’re rewarded with the secret ingredient that’ll turn your everyday happy-hours into craft cocktail occasions.

The other “special” ingredient for this rum cocktail is the rum and raisin simple syrup, though it doesn’t require nearly as much time as the dram. You’ll be surprised at how the raisin flavor really permeates the syrup.

For rum and raisin simple syrup

I know. That’s it? Just mix? Yes. Once you’ve got the dram and the raisin and rum syrup, it’s really quick and easy.

It wouldn’t be a craft cocktail without a garnish, right? Here’s a few ideas.

For cocktails, I like to garnish with ingredients present in the drink. In this case, the simple syrup soaked raisins are a no brainer and orange peel echoes the orange bitters in this libation.

Other unique garnishes might include a small stick of raw sugar cane (rum is made from sugar cane) or a cinnamon stick to hint at the flavors in the allspice dram. (Note: I’d avoid floating whole allspice berries in the drink as they are small and could easily be ingested — and that wouldn’t be fun.)

I think you’ll really like the sophisticated flavors in this twist on a classic recipe. My tasters certainly did!

FOR THE RAISIN SIMPLE SYRUP: