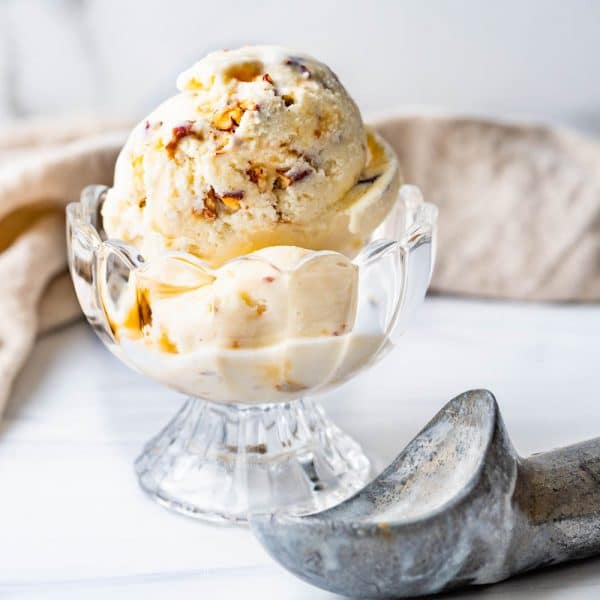 Brace yourself. This is one of the BEST ice cream combos on the planet. Homemade bourbon ice cream, swirled with rich, buttery brown sugar pecan pralines. The bourbon keeps the ice cream scoop able right from the container and the chunks and bits of sweet Southern pralines make every bite of this pralines and cream ice cream a revelation.

Though this is an easier and more foolproof method of making ice cream, it does require good “mise en place” (everything in its place). The bourbon ice cream custard base has 3 components to assemble and they go pretty quickly, so having them prepped and ready will make this a much smoother process.

I recommend you read the recipe through at least two times before you begin.

If you don’t have pecan pralines already made (or purchased), do that before you begin.

I’ve used this foolproof method for making ice cream ever since I discovered it several years ago. It comes from Jeni Britton Bauer of Jeni’s Splendid fame.

She has created a way to make homemade ice cream custard without eggs, so there’s no risk of curdling (and much less opportunity to F#@K it up).

The result is a perfect balance of creamy, chewy, melty, ethereal ice cream bliss. Trust me. You WANT THIS.

This method is very simple to make, but you need to have each component in place before you start. So follow the instructions as they’re given in the recipe card, to help it go smoothly.

This is the three step method to making the ice cream base. You can see that having the cornstarch component and the cream cheese component already prepped will make the whole process go more smoothly. It’s not difficult, but to avoid stops and starts, you’ll want to have it all ready to go.

The flavor base for my praline ice cream is the booze. Kentucky bourbon is my preference.

What’s the best bourbon to use for the pralines and cream ice cream?

It’s up to you. I’ve used Jim Beam for this particular batch.

However, I’ve also made it with Maker’s Mark and Knob Creek brands. These are more premium and pricey bourbon whiskies, but they’ll give the ice cream a wonderful smooth flavor.

The bourbon whisky flavor isn’t prominent or overpowering in the pralines and cream ice cream. It just adds a soft, almost smoky richness.

This recipe doesn’t need much alcohol (about 4 tablespoons) to give it a smooth bourbon backnote.

After adding the whiskey, chill the bourbon ice cream custard until very cold, about 4 hours or overnight. (I usually go with the overnight method).

I use my Cuisinart electric churn for making all of my homemade ice creams. There are fancier models, but I like this one for its compact size and very straightforward function. (There are literally 4 components: The electric base, the freezer canister, the paddle and the lid with convenient add-in receptacle.).

If you have a different model of ice cream maker, just follow the manufacturer’s instructions to churn your ice cream.

In the photo (above, right) you can see how the ice cream base starts to change from a custard to a richer, soft serve consistency. It has body and character. As it continues to churn and freeze, the ice cream will start to come away from the sides and be more solid. That’s when you want to add your pecans and pralines to the mix.

This pralines and cream ice cream recipe gets a double hit of nuts from both the Southern brown sugar pralines as well as extra toasted pecans. These two components combine for both sweet and richly nutty nuggets in every bite.

Toasted pecans lean toward a maple flavor, which pairs perfectly with the bourbon ice cream base and the sweet Southern pralines enrobe their nuts in a rich, buttery, brown sugar coating.

Don’t add the chopped nuts and pecan pralines until the ice cream is 90% churned. You want the mix-ins to remain chunky and crunchy. Adding them when the base is liquid-y would soften the nuts and pralines, denigrating their integrity.

After you’ve churned in the pecans and pralines, the ice cream will be about the consistency of soft serve and it needs to rest in the freezer for several hours before enjoying.

This will give the bourbon ice cream an opportunity to set properly, so that you can actually scoop it with an ice cream scoop. Remember, the bourbon prevents it from freezing completely, so this bourbon praline ice cream needs a rest in the deep freeze to achieve and maintain its “ice cream credentials”.

If you don’t have one of these cool Tevolo ice cream containers yet, get one. They’re super convenient and they come in several sizes. Plus, I love the pliable silicone lid that keeps the ice cream fresh (without mixing with other freezer flavors) and is easy to put on and take off.

Folks, I don’t gush often, but when I do, it’s something GUSH-WORTHY. This bourbon infused pecan pralines and cream ice cream is 100% ALL THAT. It’s smooth and creamy, with no icy chunks or crystalized bits normally found in homemade ice cream.

The bourbon flavors the ice cream without dominating and it blends so well with those sweet, crunchy praline nuggets. Extra crunch from the toasted pecans will keep you going back for yet another spoonful again and again.

How long will the ice cream last?

In my experience, not long — but that’s just because it’s so good. You can store it in the freezer well covered for a week to 10 days (but only if you don’t tell anyone its there.)

Can I use store-bought pralines?

Yes. Just give them a rough chop before churning into the ice cream.

Can I use other types of nuts?

I like to use pecans in this recipe because the pralines also have pecans in them, but if you want to switch it up with almonds, pistachios or macadamia nuts, I won’t make a fuss.

Will other liquors work in this pralines and cream ice cream?

To me, bourbon is the best alcohol in this ice cream, but you can use another whisky or substitute dark rum if you like.

Can I make the ice cream without alcohol?

Yes. If you want to add vanilla flavoring instead to the ice cream base it will work fine. Keep in mind that without the bourbon, the ice cream will be a bit firmer and a little harder to scoop straight from the freezer. You may want to let it rest on the counter for 5 minutes before serving.

What do I do with extra pecans or pralines?

Either make another batch, or sprinkle more of them over a dish of this heavenly ice cream. 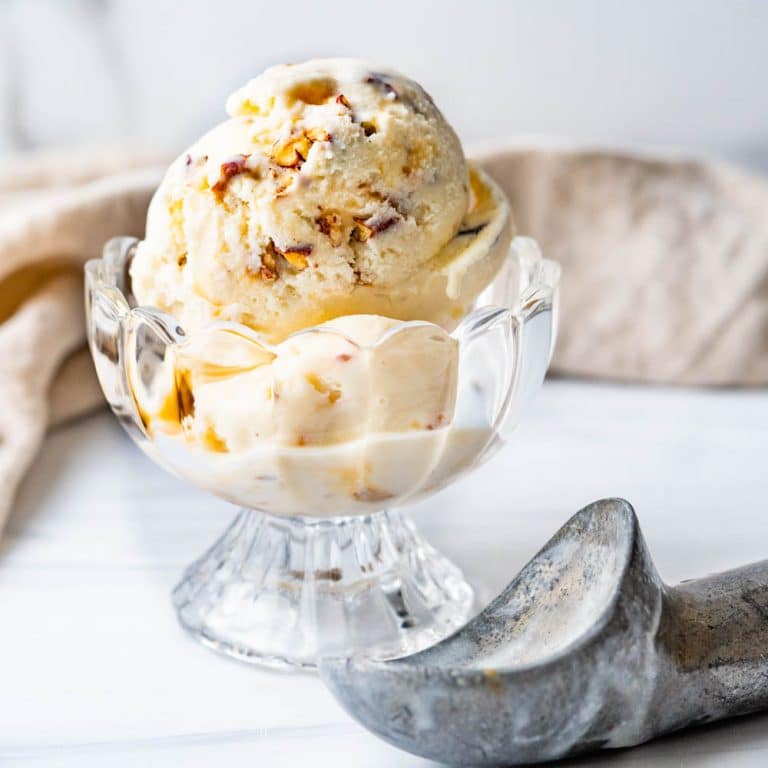 ASSEMBLE THE BOURBON ICE CREAM BASE:

ADD THE TOASTED PECANS AND PRALINES: