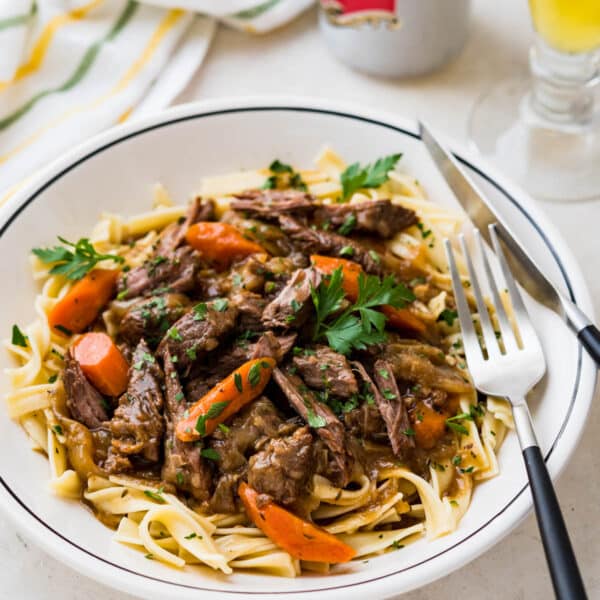 Beef carbonnade is a flemish stew that gets its depth of flavor from searing and caramelizing, then slowly braising in a dark, lager beer. This hearty, rich carbonnade flamande is easy to make in a dutch oven but also works in a slow cooker or Instant Pot.

This article has been updated for recipe, content and photos since it’s original publication in 2016.

What is carbonnade flamande?

This Belgian beef stew goes by many names. Known in Dutch as stoofvlees or stoverij and in French as carbonade (more commonly spelled carbonnade in English). It’s a warm, hearty, stick-to-your-ribs recipe that will warm you from the inside out.

Considered the Belgian answer to France’s boeuf (beef) bourguignon, this Flanders stew is a wonder.

What you’ll love about this beef carbonnade:

My preferred method of making slow-cooking stew is in a dutch oven, which can seamlessly float between your stovetop and range for the best of both worlds.

Of course, you can use your Instant Pot or pressure cooker as well as a slow cooker or Crock Pot, and I’ve given instructions for those methods below.

How to make beef carbonnade in a dutch oven:

Pro-Tip: I know it’s a pain to brown the beef strips in batches, but trust me, you want to take your time. Working in smaller quantities will help the meat brown without releasing so many juices that would ultimately steam or boil the beef chunks, not sear them.

The most significant difference between the Dutch oven and the Instant Pot methods is how you caramelize the onions for the carbonnade. Otherwise, you’ll follow the same primary method of making Belgian beef stew in the Instant Pot.

Making carbonnade of beef in the Instant Pot

Using a slow cooker to make the Belgian beef stew requires another pan or skillet because Crock Pots can’t sear the meat and caramelize the onions as you can in a skillet over a burner.

How to make beef beer stew in the slow cooker:

Unlike some supreme court justices who like beer, I admit it’s generally not my first choice of beverage. Therefore, I defer to the experts on which style of beer works best in a carbonnade recipe, though it would make sense to use a dark Belgian ale since we’re talking about a Flemish stew.

What’s the best beer for Carbonnade a la Flamande?

In the middle ages, Benedictine monks were required to be self-sufficient and, thus, made and sold goods to sustain themselves, with any profits going to charity. One of their best-selling products was/is a variety of ales.

Trappist and Abbey ales have the designation of origins similar to the distinctions found with many food products like San Marzano tomatoes or Rhum Agricole.

Trappist and Abbey ales are known for both blond and dark ales; I’d recommend using the darker versions for the Belgian beef stew.

Any of these will give your Flemish stew an air of authenticity, but if you’re more concerned with making dinner than sourcing D.O.P. ingredients, look for a dark beer to add malty and caramel notes.

According to Forbes, small breweries have had a resurgence in the last dozen years, and cities big and small often have one or two locally owned breweries.

I’m all for supporting our communities, so if you have a local brewer, ask them for their recommendation on this stew.

If all you have is the grocery store or 7-Eleven nearby:

Ultimately, it’s your kitchen, and I’m not the food police, so if your options are limited, I understand. You can just do your best with what’s available.

Using a pale lager (like Stella Artois) will produce a good version of this beef and beer stew, just not as dark or malty as the traditional ales.

Confession: I’ve even made this braised beef recipe in the past using Guinness Stout in a nod to St. Patrick on his special day.

What goes with beef carbonnade?

Traditionally, you would serve boiled potatoes, french fries, or stoemp (pronounced stoomp), a traditional Belgian dish of potatoes, cabbage, and/or brussels sprouts and carrots, similar to an Irish colcannon.

I think this would be very good with mashed potatoes or served over buttered noodles, which is what I did here.

How do I store leftovers?

Place in a storage container with a tight-fitting lid. Store in the refrigerator for up to 5 days. Reheat in the microwave or on the stovetop.

Can I freeze beef carbonnade?

Yes. It will keep for up to two months in the freezer. Defrost before reheating.

How does it taste?

My husband had a really tough time with this Flemish Belgium stew. First, because there was a good Abbey ale in the refrigerator with strict warnings not to touch it. Second, after I made the carbonnade, the natural light in my kitchen had shifted, and I had to wait until the next day to get these final pictures…

That meant that he came home expecting the braised beef recipe for dinner and instead was shuffled out to the grill to cook a pork tenderloin: darn and shucks.

However, the next night, he was very excited about the meal.

The carbonnade of beef was fork tender, the sauce rich and malty with a slight tanginess. I served the Belgian beef carbonnade in a shallow bowl over thin egg noodles with a few sprigs of fresh parsley.

He returned two, then three times, and ultimately claimed the flemish beef leftovers for his lunch the next day.

I think you’re going to enjoy this one! Bon appetit! 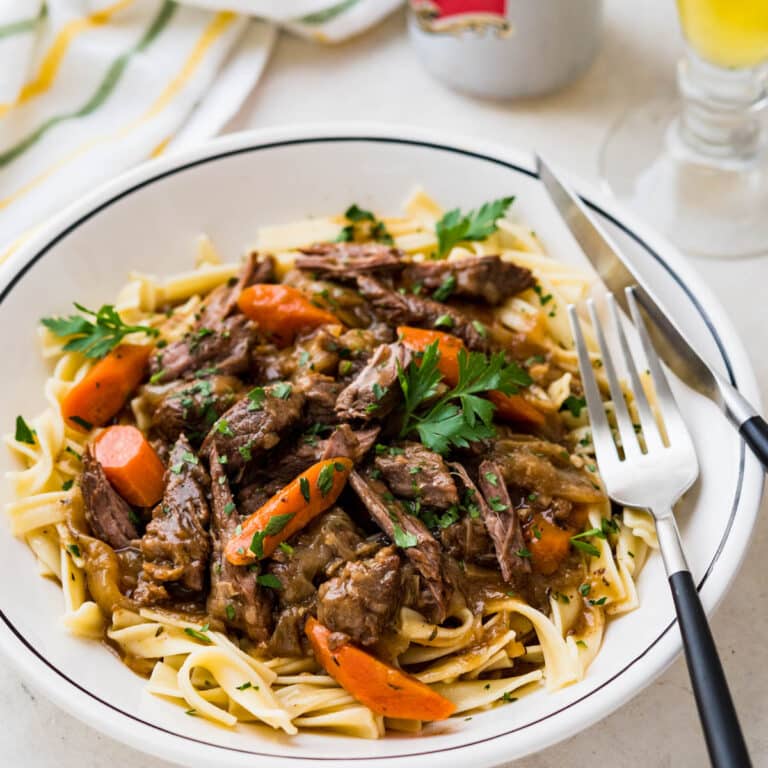 TO MAKE CARBONNADE IN A DUTCH OVEN: