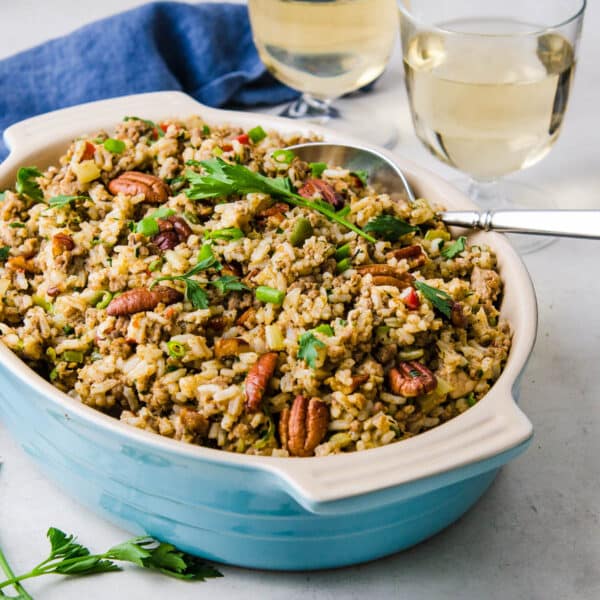 Louisiana Rice Dressing
This is a Creole take on a classic Louisiana rice dressing. You can use this as a stuffing for a turkey or several chickens, or just serve it in a bowl or casserole dish on the side. This rice dressing recipe is made for holidays and feeds a crowd.
Total: 1 hour
JUMP TO RECIPE PRINT RECIPE
Home | Recipes | Side Dishes | Louisiana Rice Dressing (a holiday favorite)

Rice dressing is a Louisiana staple that can be served as a side dish or used as a stuffing for turkey or chicken. This rice dressing recipe uses the holy trinity of green peppers, onions and celery with ground beef, pork, chicken livers and oysters. It’s rich, savory and 100% delicious.

What is rice dressing?

According to John Folse’s tome The Encyclopedia of Cajun and Creole Cuisine, {affiliate link} this rice dressing recipe has been around for more than 150 years. It’s a staple on holiday tables throughout Southern Louisiana as it combines all the best flavors of the bayou including meat (pork, beef & chicken) seafood (oysters) and nuts (pecans).

It’s a simple, but rich and hearty side dish that just screams Louisiana.

In Folse’s original recipe, the only seasonings were salt and pepper. I’ve added a classic Creole (or you can use Cajun) blend to crank up the volume on this savory stuffing.

This recipe is pure Louisiana from the rice which is a native crop to the low country and bayous, to the holy trinity (onions, celery and green pepper).

The blend of meats with chicken livers and oysters sounds strange, but it’s one of those things that just works. Don’t question it, just enjoy.

For those who say they don’t like chicken livers or oysters — I’m here to tell you that you’ll never be able to identify them in the rice dressing as everything is cooked down into one homogenous dish with no one flavor dominating.

How to make rice dressing:

Pro-Tips about the rice:

Do NOT use hot rice in this dressing recipe.

It should be cooked and completely cooled before adding it to the meat mixture.

I recommend making it earlier in the day or even several days before. Just store it in the refrigerator and its one less thing to do on the day you make the rice dressing.

However, if you are assembling the recipe on the same day, cook the rice and remove the lid so that the steam evaporates and the surface of the rice dries out.

Using hot, sticky rice will cause the grains to soak up more liquid and can make the dressing mushy.

What’s the difference between dirty rice and rice dressing?

Though they might sound similar and share some basic ingredients (rice and the holy trinity of bell peppers, onions and celery) there are big differences between these two classic Louisiana recipes. Dirty rice is made with chicken livers and giblets and doesn’t contain any other meat or seafood.

Can I eat rice dressing straight from the skillet?

Yes! The beauty of this recipe is that everything is cooked in the skillet, so you can absolutely enjoy it hot from the pan.

How to stuff a turkey with rice dressing

How should I store the rice dressing?

You can store it in a well sealed food storage container or if it’s in a casserole dish, cover tightly with plastic wrap and refrigerate.

How far in advance can I make the rice dressing recipe?

Up to 2-3 days in advance. Keep well covered and refrigerated. To reheat, remove from the fridge for 30 minutes before heating in a 350° oven for about 15-20 minutes.

Leftovers are good for 2-3 days or you can freeze leftover rice stuffing for up to 2 months in a freezer safe container.

Can I freeze the rice dressing?

Yes. This recipe is actually well suited to freezing. Just transfer to a freezer safe storage container or a zip top freezer bag. It will keep well for up to 2 months.

I made this rice dressing recipe as a side dish to go with a grilled, spatchcock chicken and green salad. It was so good that four of us ate just over half of this two quart casserole… piglets we are.

Here’s what my tasters had to say:

“It’s really good. I love all the meats and how the flavors work together. When you said it had oysters, I was looking for big chunks, but they’re dissolved into the rice. It gives it a really nice flavor throughout. I love that spicy Creole kick.” – Scott

“Cajun comes to Thanksgiving! What a treat! “– Craig

“This went so well with the chicken, which can be a bland meat, it made such a great pop and contrast.” — Chris

What can I do with leftover rice dressing? 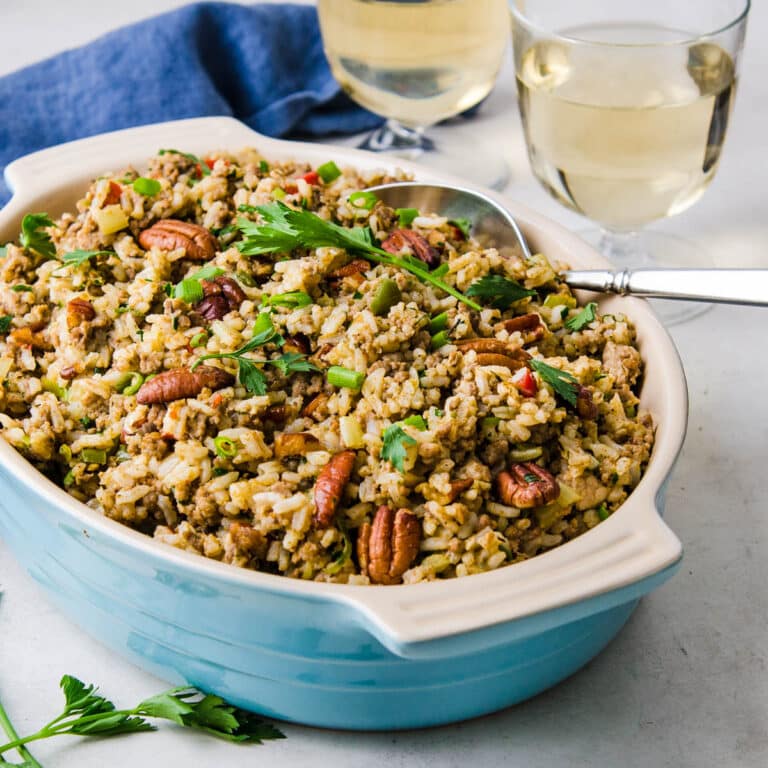 This is a Creole take on a classic Louisiana rice dressing. You can use this as a stuffing for a turkey or several chickens, or just serve it in a bowl or casserole dish on the side. This rice dressing recipe is made for holidays and feeds a crowd.
Course Side Dish
Cuisine Cajun, Creole, Louisiana
Keyword chicken livers, dressing, ground beef, ground pork, oysters, rice, stuffing
Dietary Restrictions Egg Free, Gluten-Free
Prep Time 20 minutes
Cook Time 40 minutes
Total Time 1 hour
Servings 10

TO STUFF A TURKEY WITH RICE DRESSING:

SERVE DIRECTLY FROM THE PAN:

TO SERVE AS A CASSEROLE: