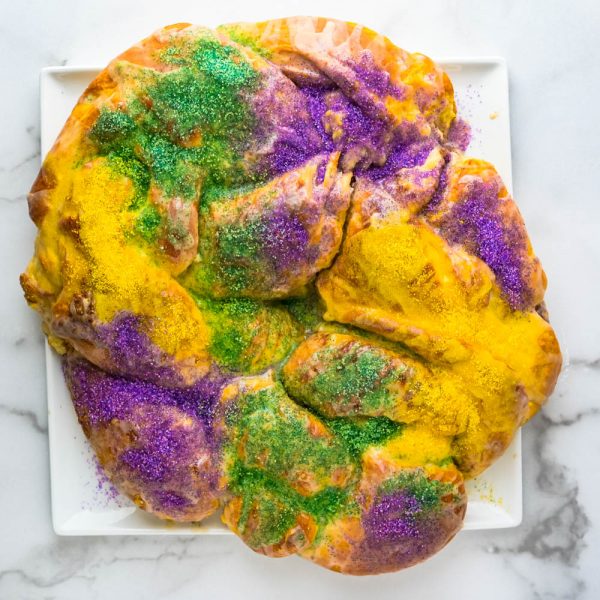 This post contains affiliate links which means if you make a purchase, you’ll pay no more for the item and I receive a small commission. Win-win!

Craving a traditional king cake to celebrate Mardi Gras? That famous New Orleans cake is a must for Fat Tuesday and this King cake recipe is the original, authentic, from the master himself, John D. Folse.

What is King cake?

Lacquered with an easy almond glaze and festooned with traditional green, purple and gold Mardi Gras colored sprinkles, this delicious New Orleans cake is great for breakfast or brunch with a cup of strong, hot chicory coffee or café au lait.

King cake is a de rigeur recipe for any Mardi Gras or Carnivale bash.

John D. Folse is the legendary Louisiana chef, restauranteur, television personality and local authority on Creole and Cajun cuisine. His tome, The Encyclopedia of Cajun and Creole Cuisine, is my bible for authentic recipes from this region.

The book itself must weigh 12 pounds and is filled with history, lore and recipes from the Pelican state. If you’re serious about Cajun and Creole cooking, it’s a must have.

The history of the famous New Orleans King cake

King cake has been a fixture at New Orleans Mardi Gras celebrations for scores of years, but this dessert isn’t just for Fat Tuesday revelry.

The “King” in King cake

Into each traditional king cake, the baker tucks a small plastic baby figurine. It can represent the New Year or the baby Jesus who was visited on the Twelfth Night by the Magi.

Everything from porcelain charms and figurines to a dried bean or pea were tucked into the cake to represent the baby Jesus.

Current custom crowns the person who gets the “baby” as “king of the revelry” and he/she must bring the next King Cake or host the next Mardi Gras party.

King cakes are popular all over the world in some form or another. Dating back to Roman times, where they chose the “King of Saturnalia” by baking a bean into the cake.

Additionally, the practice of eating a cake with a bean tucked into the dough is also found in France (galettes de rois), Italy (pannetone), Portugal (Bolo-Rei) and England (fruitcake), and those traditions began countless years before Mardi Gras was celebrated in the Big Easy.

Though King Cake is typically consumed exclusively on the Twelfth Night throughout the rest of the world, New Orleans has put their own spin on custom and consumption.

Rather than enjoying it solely on the twelfth night, traditional New Orleans King cake is considered a pre-Lenten indulgence that’s enjoyed during the entire Carnivale season.

From these seemingly humble ingredients, comes a flaky, rich, sweetened pastry that reminds me of a danish coffee cake. It’s not difficult to make and just takes a little time and patience.

I recommend using a stand mixer with a dough hook to make this New Orleans cake. The dough is kneaded for 8-10 minutes in the stand mixer or until the dough separates from the bowl.

Kneading the King cake dough for this recipe would take much longer to do by hand.

After kneading, the dough needs to proof (rise). Butter a clean bowl and transfer the plush dough to the bowl. Cover with a clean dish towel and let it rise until doubled in size, for about 1 hour.

I found this dough very easy to work with. It’s soft and pliable, just be sure to liberally flour your work surface and the the top of the dough to prevent any sticking.

Use a pizza cutter to cut the dough into strips. It makes it so much easier.

To create a warm, draft free environment for proofing, turn your oven on to 200° and let it warm up for 5 minutes. Turn the oven off and place the dough in the oven.

Once the dough has finished it’s second rise, it’s time to bake.

To ensure a smooth glaze with no lumps, use a whisk or electric hand mixer to combine the ingredients until creamy.

It’s also flavored with almond extract and cinnamon, which will enrobe the cake with its distinctive King cake flavor.

Of course, there’s another reason for the glaze… It’s how you get the sprinkles to stick! And if there’s one thing that a King cake recipe demands… Mardi Gras hued sprinkles.

Traditional Mardi Gras colors are green, purple and gold and they hold special meaning. Green stands for faith. Purple is for justice and Gold represents power.

The main rule when it comes to King cake sprinkles is that you must have A LOT OF THEM.

I initially thought that my 3 in 1 container of Mardi Gras sparkling sugar would be ample for the cake. NOT.

Before you start on this, make sure you have 3 individual jars of colored sparkling sugar. (There’s an affiliate link for sprinkles and baby figurine just above the recipe card at the end of the post.)

I recommend transferring the sparkling sugar to 3 individual prep bowls (it’s easier to scoop and spoon the sugar that way and your not stuck shaking the jar over the cake, while the glaze dries too fast).

As soon as the glaze is spread over the top of the King cake, dip your spoon into one of the bowls and sprinkle the sparkling sugar liberally over one segment of the cake.

Go to the next color, scoop and sprinkle over another section. Continue in this manner until you’ve coated the King cake in a blinding shock of green, purple and gold.

How to serve a New Orleans King Cake

This might seem like a no-brainer, but there is a tradition behind doling out a King cake.

The New Orleans cake is usually the end to a big Mardi Gras bash (i.e. lots of revelers) and custom dictates that the entire cake be consumed.

Therefore, it’s traditional that the King Cake is sliced all at once, into as many slices as there are people at your celebration… plus one extra slice for God.

Can I make the cake ahead of time?

Yes, with a caveat. Make the cake, but wait until the day you plan to serve it to glaze and add the sprinkles.

Can I freeze King cake?

Yes. You can wrap and freeze the King cake for up to 3 months. If you’re freezing the whole cake, I’d recommend glazing and decorating after the cake has thawed completely.
However, you can also freeze slices of decorated leftover king cake. Wrap them in plastic wrap and then in freezer paper.

Didn’t you read above, where you’re supposed to eat the WHOLE THING in one sitting? Kidding… Place the cake in an airtight cake container. It can be left out on the counter or refrigerated. If refrigerating, let the cake come to room temperature before enjoying.

Can King cake be mailed?

I’ve never mailed a King cake, but I know it can be done, because there are bakeries in New Orleans that do it. Here’s a link to help ship you ship your cake.

Helpful items for this recipe: 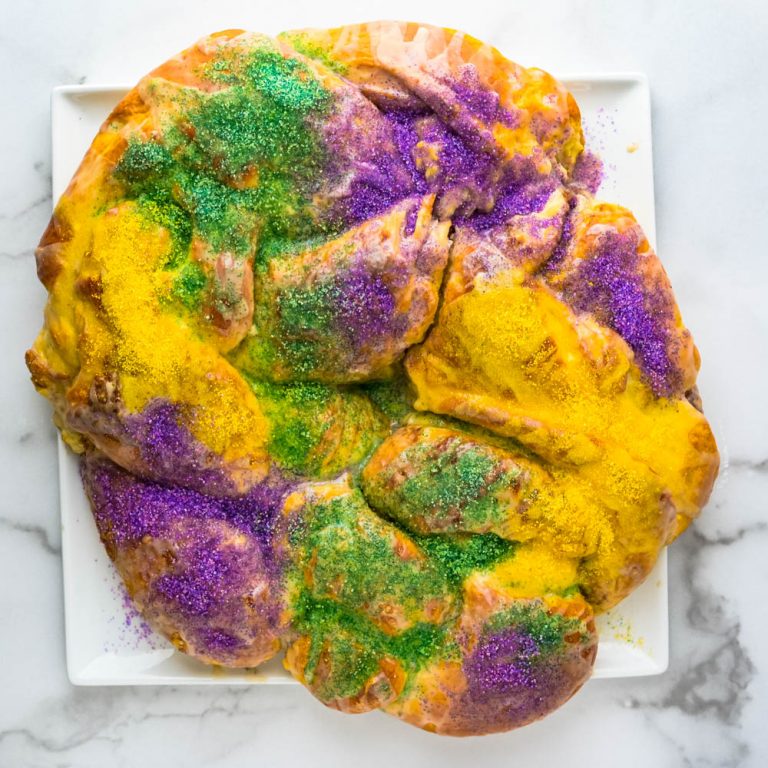