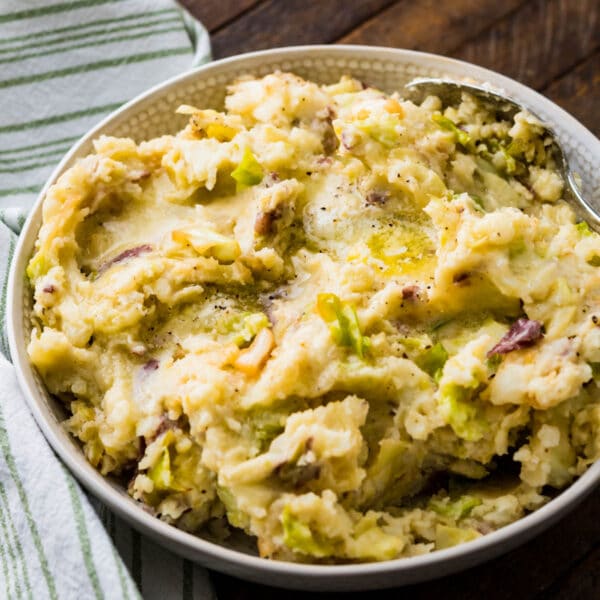 Colcannon is a classic Irish side dish made made with cabbage and potatoes, a little butter and simple seasonings. It’s rich, hearty and deeply satisfying. This easy Colcannon recipe is delicious with everything from corned beef to Irish bacon or bangers and perfect for St. Patrick’s Day festivities.

This traditional Irish side dish is pure comfort food. A nostalgic combination of creamy mashed potatoes blended with tender sautéed cabbage and a melty pool of butter sitting like a golden lake on top. No-one can resist this simple, rustic Irish side dish.

Origin of these Irish mashed potatoes

From the Gaelic, cál ceannann for white-headed cabbage, Colcannon has been a staple in Ireland at least since the 1700s. The first mention of this cabbage and potato dish is found in a diary entry from William Buckley in 1735, a traveler from Wales passing through Dublin.

“Dined at Cos. Wm. Parry, and also supped there upon a shoulder of mutton roasted and what they call there Coel Callen, which is cabbage boiled, potatoes and parsnips, all this mixed together. They eat well enough, and is a Dish always had in this Kingdom on this night.”

The dish, marrying long-customary cabbage or kale with potatoes (at the time, a relatively new ingredient to the British isles) created a “stick to your ribs” type of dish that would keep working men satisfied for hours.

So ubiquitous was this cabbage and potatoes recipe that there was even a song written and sung about them:

Well, did you ever make colcannon made with lovely pickled cream
With the greens and scallions mingled like a picture in a dream
Did you ever make a hole on top to hold the ‘melting’ flake
Of the creamy flavoured butter that our mothers used to make

Oh you did, so you did, so did he and so did I
And the more I think about it, sure the nearer I’m to cry
Oh weren’t them the happy days when troubles we knew not
And our mother made colcannon in the little skillet pot

Is Colcannon considered a lucky food?

It isn’t considered lucky, per se, however, these Irish mashed potatoes are rooted in lore. They were traditionally served on Halloween in Ireland as a means to telling people’s fortunes for the upcoming year.

Wondering how THAT worked? Well, buried in the Irish mashed potatoes were three items… a coin – which promised wealth in the coming year, a rag, which denoted poverty or a stick, which meant your husband would beat you… um, really? No colcannon for him...

What you’ll need to make the colcannon recipe:

How To Make Colcannon Potatoes Video

Can I use spinach to make colcannon?

In my opinion, spinach isn’t sturdy enough for a good Colcannon. You want a green that has a little heft and chew even when cooked. Another good option beyond cabbage or kale would be escarole lettuce.

Can I make Colcannon potatoes ahead of time?

Yes. This dish can be made up to a day ahead of time and reheated in the microwave.

Can I freeze Irish mashed potatoes?

Yes. Store in an airtight freezer container for up to 2 months. Defrost and reheat to serve.

Can I make Colcannon with red cabbage?

Gawd NO! Red cabbage is notorious for “bleeding” and will color the rustic cabbage and potato dish into goopy, magenta mess.

What goes with Colcannon potatoes?

This simple recipe actually pairs well with lots of proteins, but here are some of the more traditional accompaniments:

Other things that go well with cabbage and potatoes 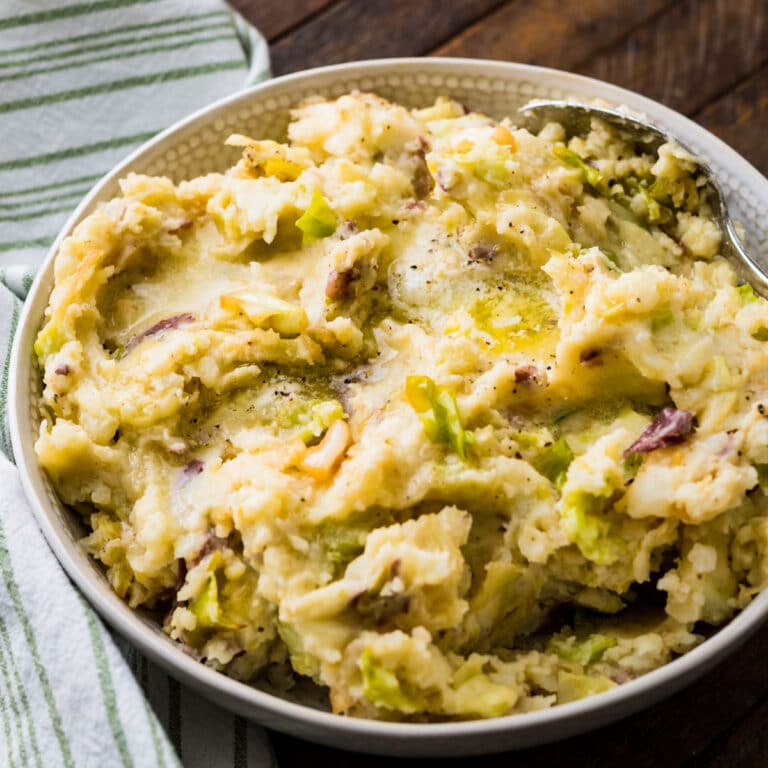