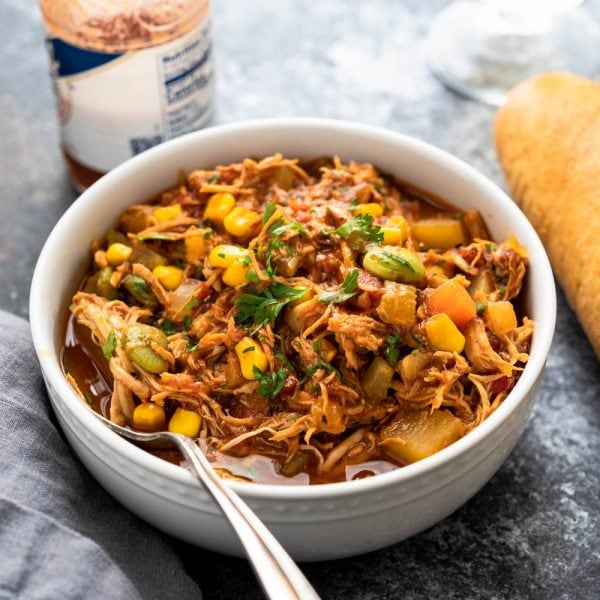 Classic Southern Brunswick stew is a meaty, bbq-y blend of meats, veggies and spices. The traditional recipe simmered all day and used everything from pork and beef to rabbit and squirrel. My chicken Brunswick stew is much less intimidating. This savory, sweet and spicy melange is loaded with shredded cooked chicken breasts, potatoes, corn and lima beans and it’s ready to eat in about an hour.

As a food blogger of nearly 8 years, I’ve learned that food and recipes can be very territorial. It happens when someone “not from around here” recreates someone else’s regional “signature dish”.

I dared to make a cheesesteak sandwich — and am still getting hate mail from Philadelphians.

It also happens when two (or more) people/restaurants or entire geographies claim ownership rights to a recipe or dish.

The famous French Dip sandwich comes to mind… Did it originate at Phillipe’s or Cole’s?

Likewise, the origins of classic Southern Brunswick stew is claimed by both Georgia and Virginia (with a nod to North Carolina as they actually have more restaurants that serve this hearty potage than the other two).

The back story of Southern Brunswick Stew

According to this 1993 New York Times article, both Brunswick, Georgia and Brunswick, Virginia have laid claim to the famous dish.

Virginia showing documented proof of a cook making this stew for a hunting camp party (from county records dating back to 1828) and Georgia claiming dominion because they hold the “original” iron pot (from a former slave ship) that the ‘first batch’ of Brunswick stew was made in.

But that’s not the only controversy in this culinary drama. There’s also a general disagreement about the recipe itself…

What makes a Brunswick stew?

This is just some of the debate that surrounds this dish. To avoid being part of the melee, I’d like to state emphatically that I’m not choosing sides.

In fact, this ISN’T a true representation of either regions recipe, but more of an amalgam of both. Consider this a neutral “Switzerland” version.

“You guys argue about it, I’m going eat.”

Now that you’ve been briefed, let’s get to the recipe.

I recommend my All Purpose Instant Pot Pulled Chicken for this stew, however, you can also use baked chicken breasts or pulled meat from a rotisserie bird.

You can use your favorite store-bought variety BBQ sauce (try Stubb’s) or try my sweet and spicy Jim Beam BBQ Sauce, which is excellent here.

Despite its hefty ingredient list, this simple Brunswick stew recipe comes together in about an hour.

How to make chicken Brunswick stew

That’s it. One pot. Ready in under an hour — and most of the prep is done is 20 minutes. Oh sure, you can give it a stir every once in a while as you sip your glass of wine, but beyond that, it’s a pretty stress-free dinner.

If you’re a fan of one pot meals, chicken Brunswick stew should be in your regular weeknight rotation. It’s hearty, rich and satisfying. Even picky eaters love this one.

So break out your dutch oven and dump all of the ingredients into the pot! Dinner will be ready before you know it.

How do I reheat the stew?

Use a heavy bottomed pot with a tight fitting lid, and slowly warm it over medium heat. This is a thick stew and tends to get thicker as it sits. Therefore, you may need to add a little bit more chicken broth to the stew as you reheat it. I recommend adding 1/3 to 1/2 cup of low sodium stock and mixing well.

Can I make Southern Brunswick stew in advance?

Yes. You can make it up to several days in advance. Bonus: it’ll give the flavors an opportunity to marry even more.

Can I freeze chicken Brunswick stew?

Absolutely. Package leftovers in a freezer-safe container and it will keep for up to 3 months. Defrost before reheating.

What to serve with chicken Brunswick stew: 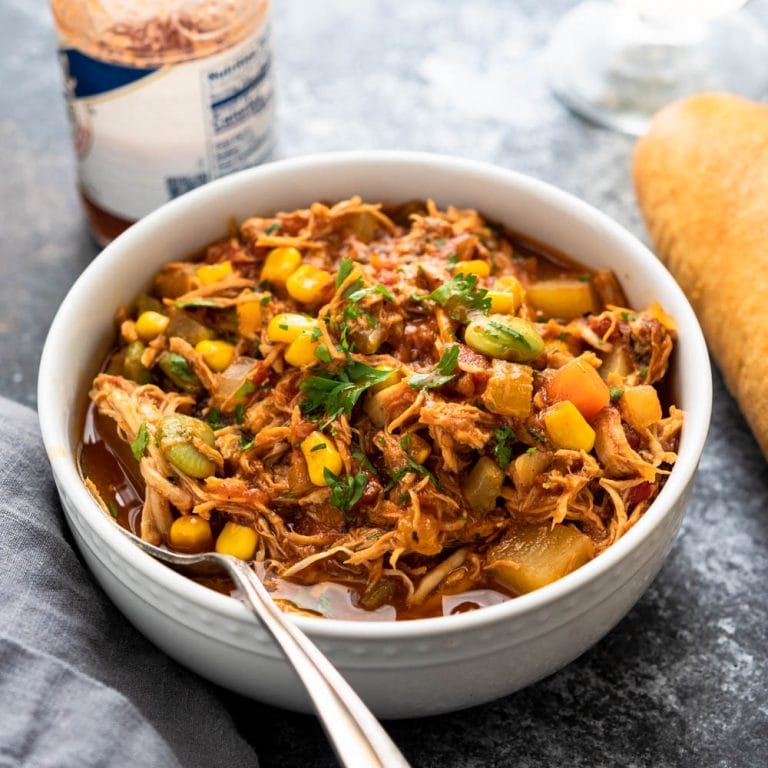