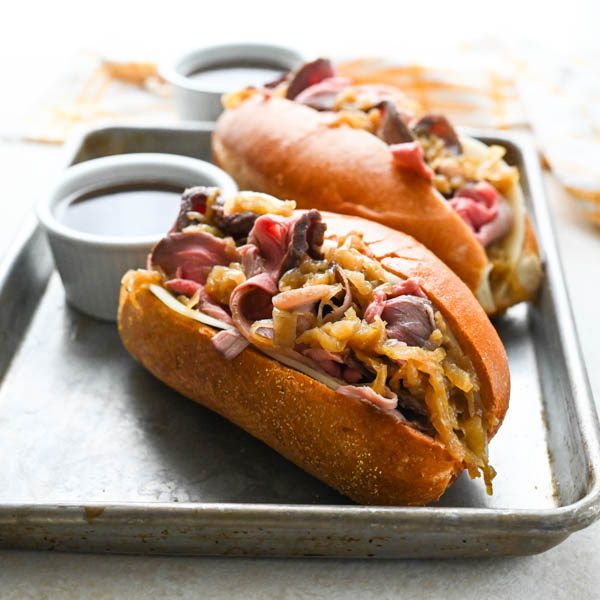 When you’re craving a hot roast beef sandwich, there’s nothing like a French Dip au Jus. The sheer simplicity of rare roast beef on bread is satisfaction enough, but amp it up with a few slices of melty cheese, slow caramelized onions and a dip in warm sherry-spiked jus — that’s sliced roast beef sandwich nirvana, friends. And because the original French Dip was born in Los Angeles, this sandwich is my tribute to the LA Rams — playing versus the New England Patriots in the Super Bowl this Sunday. 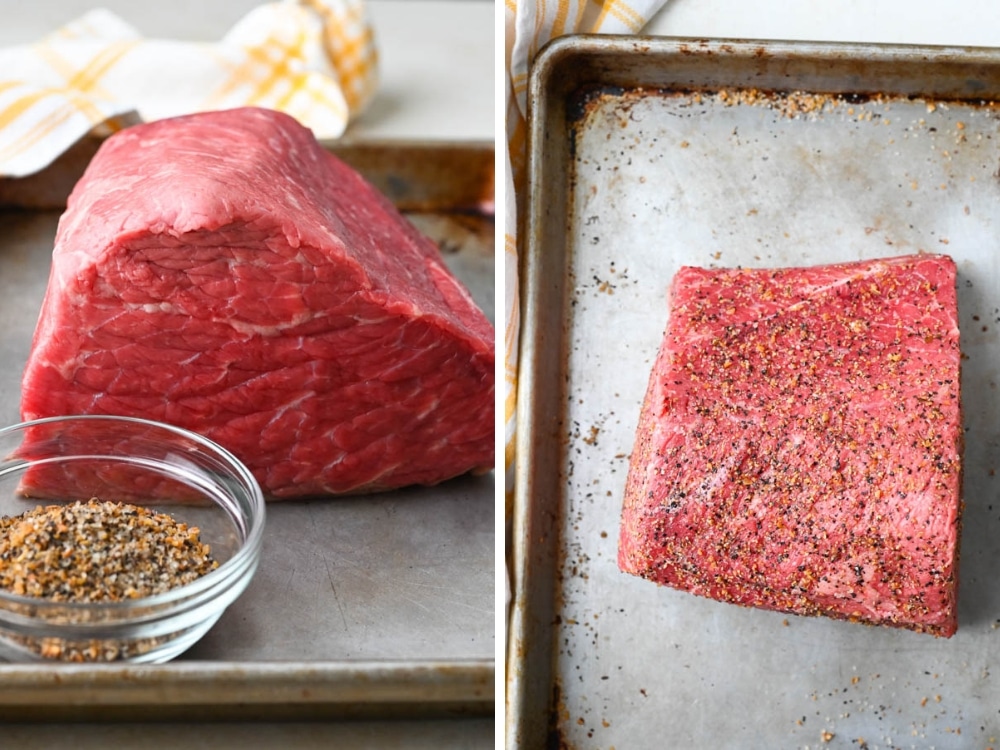 For the uninitiated, our annual Super Bowl tradition is to serve dishes that are inspired by the two competing teams and the regions of the country they represent.  I was originally going to do tofu dogs with hemp and sprouts (LOL) for the LA Rams, but my husband wouldn’t allow that. He did some Google research and determined that this hot roast beef sandwich would be an appropriate homage to LA — and more appropriate for our Super Bowl spread. 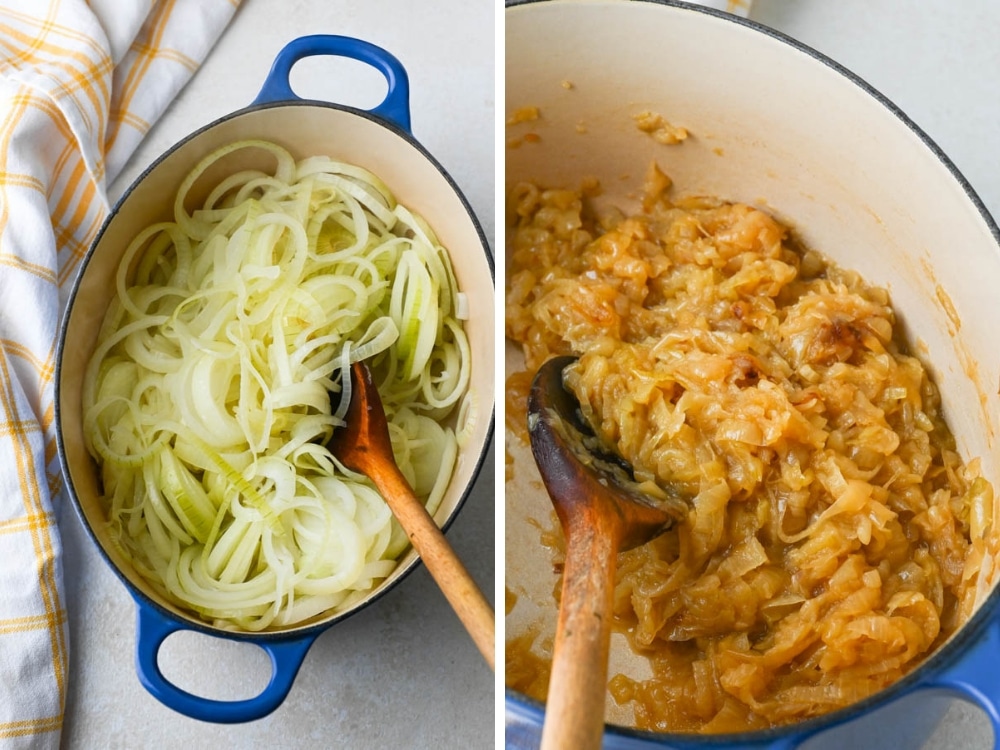 Who Made The Original French Dip Au Jus?

When a food-stuff becomes legendary — there’s always a fight over “where the original” came from and the more digging you do, the murkier the facts get. In the case of this hot roast beef sandwich, there are two LA establishments who claim to the original.

The French Dip sandwich was developed in the early 20th century — that’s pretty much the only undisputed fact. These two eateries have long since competed for bragging rights.  Read all about it in this investigative piece by Jackson Landers… Who Invented LA French Dip Sandwich?

Inventorship aside, in his article, Landers even brings into question whether or not the original French Dip Au Jus was a hot roast beef sandwich at all... Was it… could it have been… pork??? Say it ain’t so… 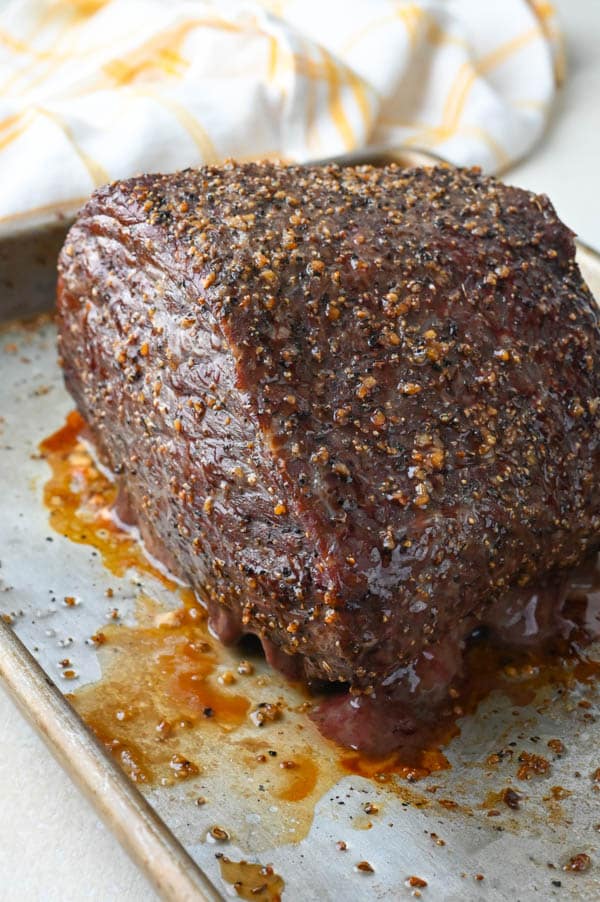 Armed with a plethora of contradictory anecdotes on how this hoagie came to be, I’m feeling more confident in the liberties I’ve taken with this hot roast beef sandwich.

Now, before we get into the nitty gritty of building sandwiches, you need a perfectly prepared roast beef. If you’ve got a good handle on cooking a roast, move on, however,  if you’re a bit skittish on getting it right, make sure you’ve got a good instant read thermometer. My choice is the Thermapen Mk4 {shameless affiliate link}. It’s intuitive, easy to use and accurate within seconds. It takes the guesswork out of roasting. 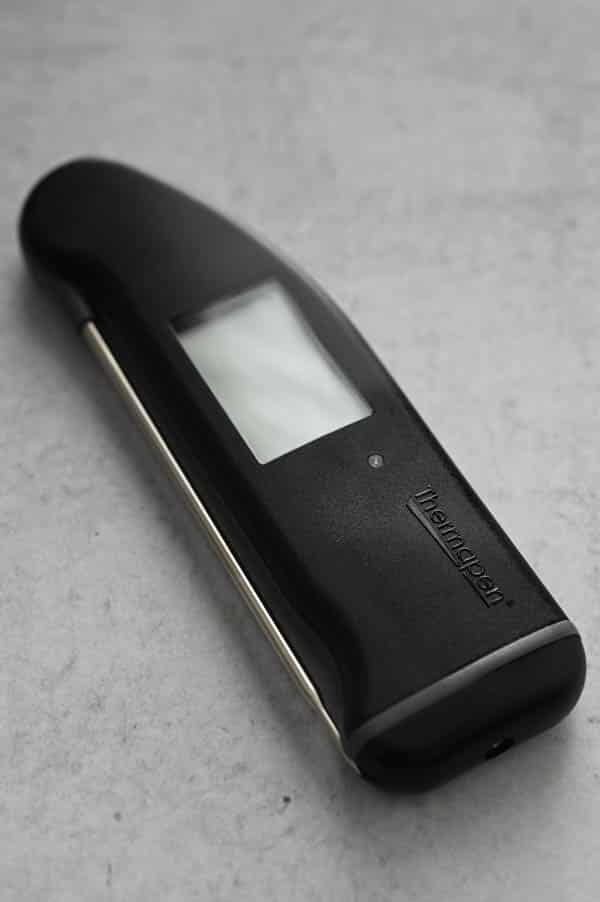 How To Make My French Dip Au Jus 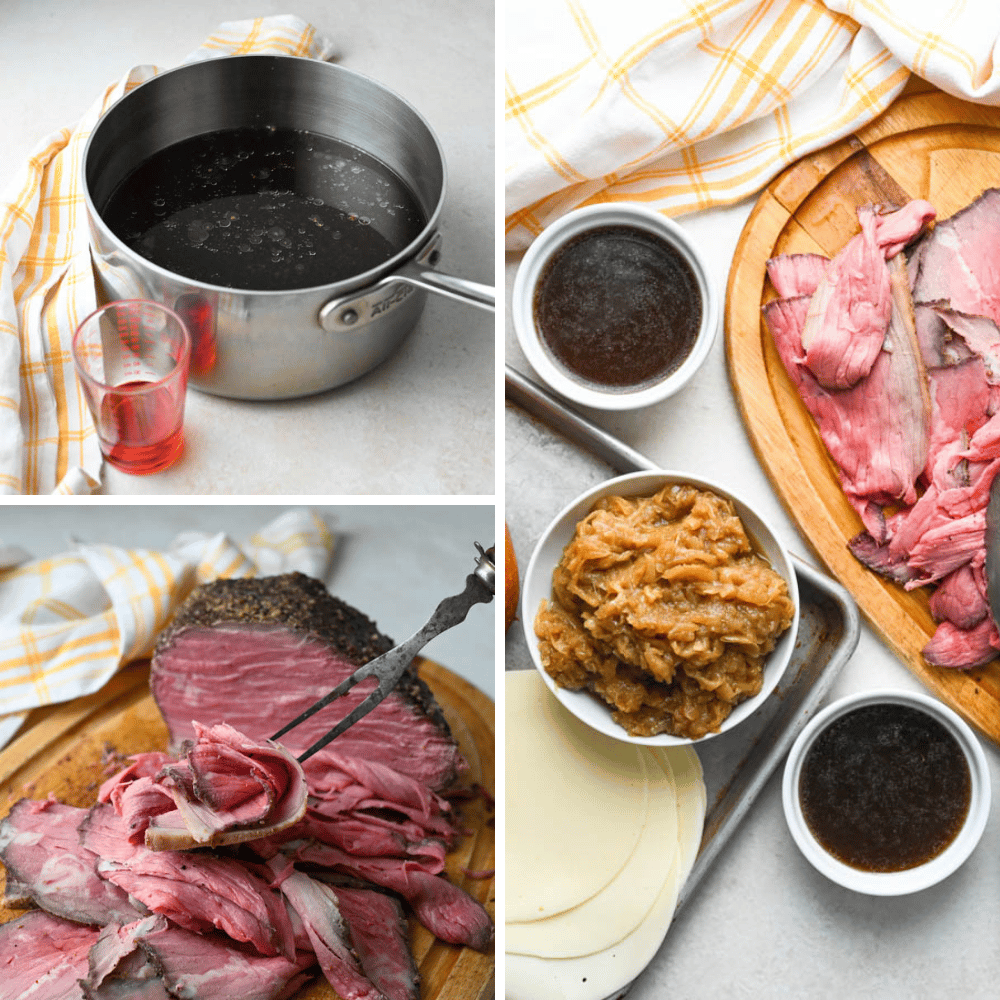 I had a hungry crew of landscapers who acted as my taste-testers for this post (along with Scott and I, of course). Let’s just say the plates came back clean!  I think they even drank the jus because there wasn’t a drop left in the ramekins. 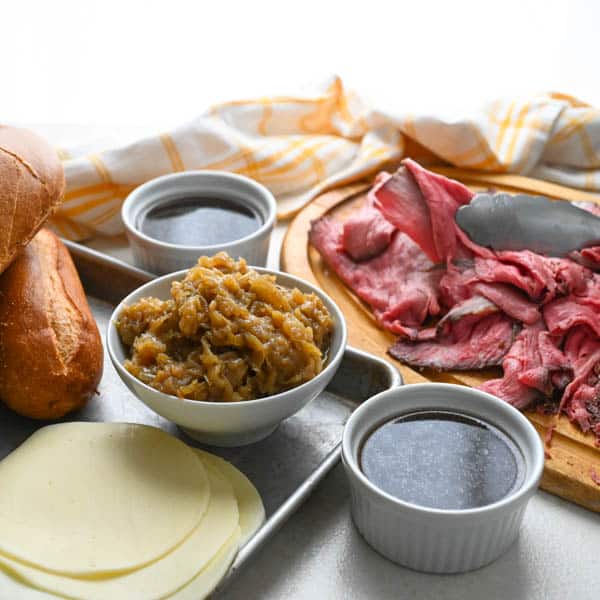 So this may not be like the original French Dip Au Jus — but maybe… just maybe… it’s better. 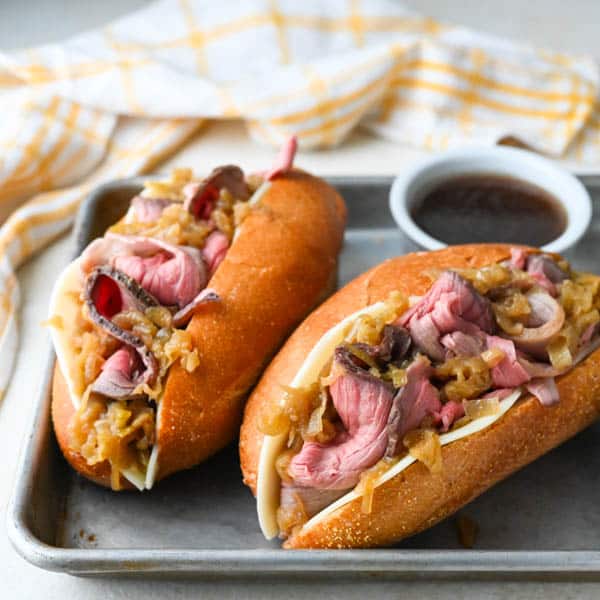 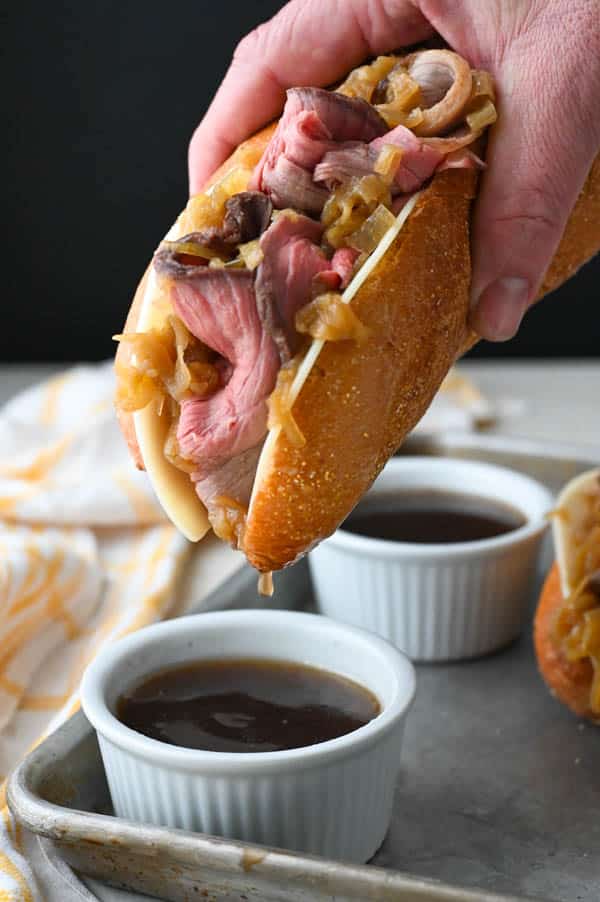 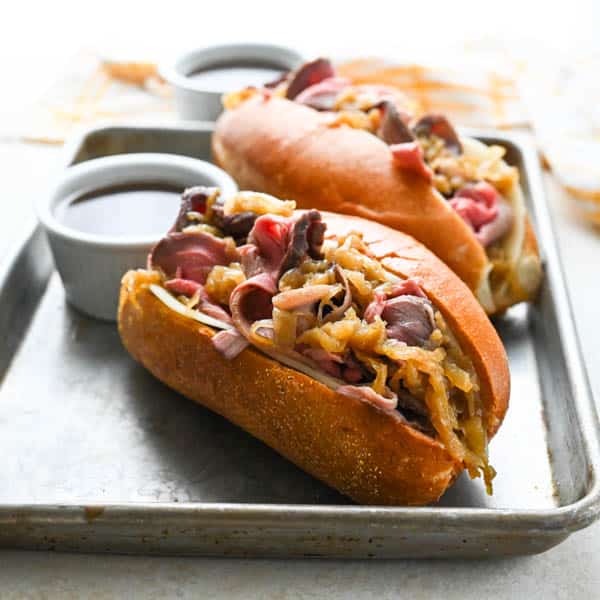 The Day Before Serving: