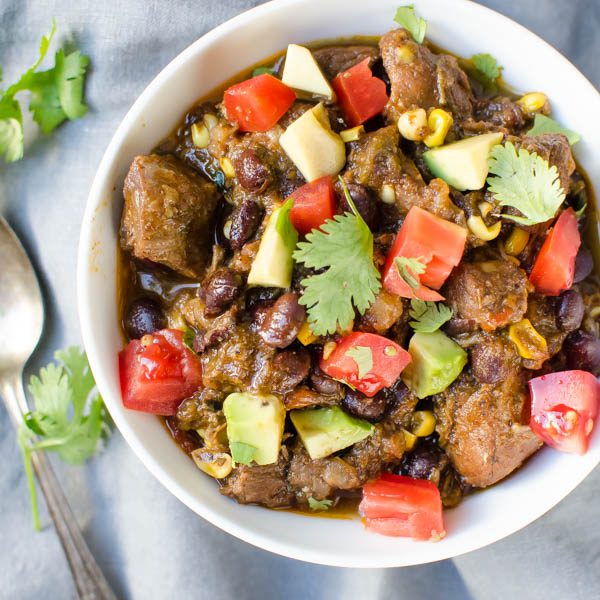 Want an easy and economical recipe to feed the whole family? My Tex-Mex braised pork stew eats like a chili with big chunks of tender pork, black beans and sweet corn. Use a dutch oven or slow cooker to braise the stew.

The inspiration for Tex-Mex Braised Pork Stew aside from a bounty of hatch chilies, is thrift and ease!  Boston butt is a very economical cut of meat, especially at Costco.

The retailer packages two 5-7 pound pork shoulders each into one package and they generally cost around $20-30.  That’s 10-14 POUNDS of meat for very little money.

I used to fix them only when I had a lot of people to cook for.  I still do that, but I’ve also found that trimming them into smaller portions of two or three pounds makes ’em perfect for everyday cooking — even for just the two (or three) of us.

Tex-Mex Braised Pork Stew is also an easy way to prepare this cut for maximum flavorwith minimal effort.   This recipe serves four to five people, which is perfect for dinner and then leftovers for lunch the next day.

For this recipe I use about 3 pounds of pork shoulder, trimmed into bite sized chunks.  Brown the meat in a medium dutch oven and add the onions, garlic and spices.  Cook for a few minutes until the vegetables soften a bit.

Then add the broth, black beans and hatch green chilies.  Seal it with the lid and place the pot in the oven for two and a half to three hours.  That slow braise breaks down the normally tough cut of meat into a satisfying, fork-tender bite.  The chilies add heat, but it’s not overwhelming – just a nice warm tingle on the tongue.

An ear or two of fresh corn kernels (or frozen) added at the end of cooking, round out this savory, mildly spiced stew.   The flavors in this pot are pure comfort and so are the aromas!  Our house was filled with its inviting bouquet — you know, the kind that signals your stomach that something really good is coming…

I like a little diced avocado, juicy ripe tomato and a sprinkle of fresh cilantro leaves on top of my stew, but it’s optional.  I recommend serving with cornbread or that heavenly Hatch Green Chili Bread, to sop up all the savory goodness. 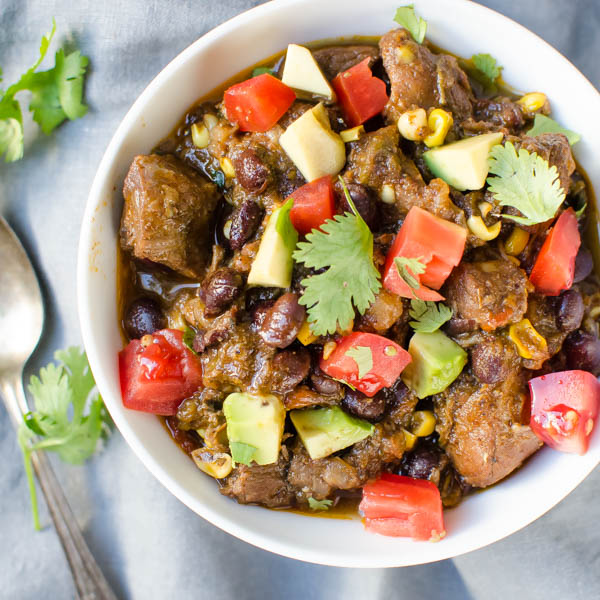