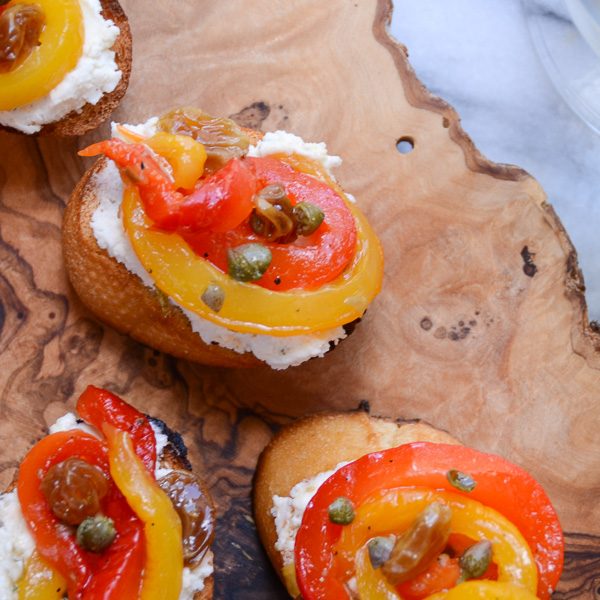 This easy bruschetta recipe with a smear of soft chèvre makes a delicious hors d’oeuvre to munch with cocktails. Roast the bell peppers in advance, then assemble the pepperonata bruschetta just before serving.

I’ve determined that pretty much anything is better on a piece of toasted or grilled bread. And it’s certainly true for these pepperonata bruschetta.  Ohmagod — don’t you just want to bite into it right now?  NOW!!!

My obsession with food on toasts is vast and endless.  Remember the wild mushroom crostini or the calamari, avocado and grapefruit bruschetta?  And for a taste treat in it’s simplest form,  top grilled bread with a bright basil and walnut pesto, ripe tomato and a wedge of soft mozzarella — and promptly gobble it up!

I suspect you may have a similar devotion  (unless you suffer from a gluten intolerance — pout).  I mean, the phrase is “daily bread,” right?  Now you may think this is a weird combination, but I have to say it works!  Silky red and yellow bell peppers, briny bits of capers and golden raisins.

I know, I know — raisins?  Yes.  For a sweet punch of flavor.  Go with me on this — it’s a yin/yan thing.  I plump the raisins (if they need it) by steaming them in the same bowl as the just-out-of-the-oven roasted peppers.  Just cover them with plastic wrap and let them steam/cool at the same time.

When the peppers are cool enough to handle, peel and seed them, cut them into strips and toss them with the raisins and chopped capers.

Adding just a hint of balsamic vinegar, olive oil and honey makes a sublime dressing that you’ll want to sop up with any leftover bread.

Boursin herbed cheese is the perfect nest for these beautifully dressed peppers.  Garnish with a little parsley for a pop of fresh green color and serve with cocktails or wine.  These will rev up your guests appetites, without spoiling them. 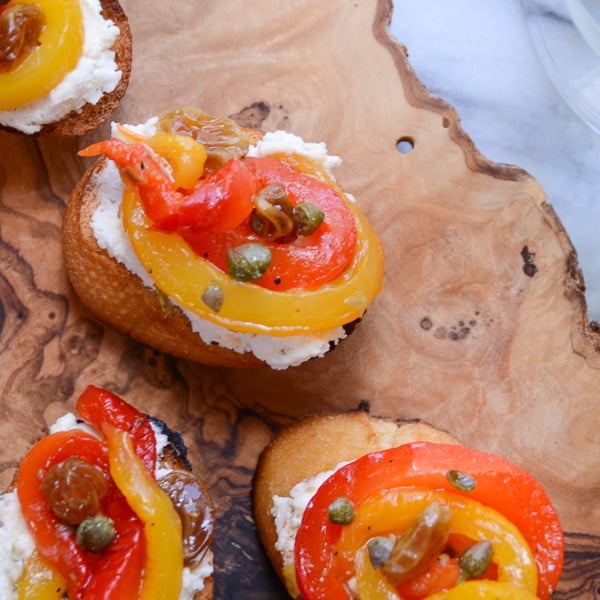 The pepperonata mixture would also be very good warmed and served over grilled fish.