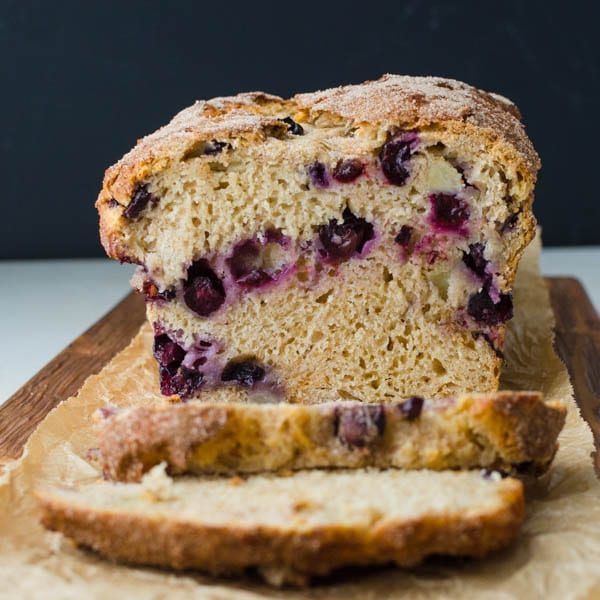 Humble-brag: This is the best blueberry banana bread recipe. Dotted with sweet blueberries and chunks of ripe banana, this quick yeast bread with a cinnamon sugar crust will be your new family  favorite homemade blueberry bread. Pinky promise.

If you’re looking for a regular “banana bread recipe with blueberries” — this isn’t it. It’s WAY BETTER. Anyone can mix berries into their standard banana bread, but this is a cinnamon scented, yeast enriched loaf. It doesn’t require rising or proofing time and  it’s like nothing you’ve had before.  That’s why this is the best blueberry banana bread recipe —EVER! 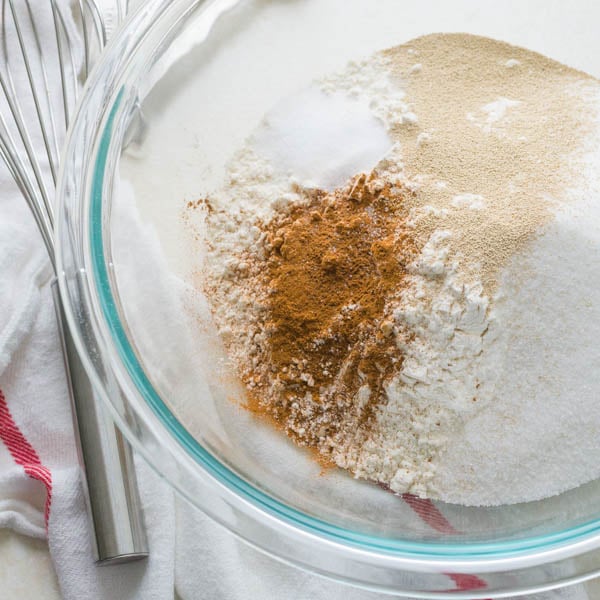 I found the inspiration for this recipe in the King Arthur Flour Baker’s Companion Cookbook and I was intrigued because it called for two leaveners that I wouldn’t normally put together to make a quick bread — yeast and baking powder. Most quick breads use baking powder and baking soda to get the rise and most yeast breads require a proofing period where they “rise” get punched down, and rise again.  This blueberry banana bread recipe doesn’t use baking soda and doesn’t need to rise. I’d never heard of a quick yeast bread before, so I began the recipe with equal parts curiosity and trepidation. 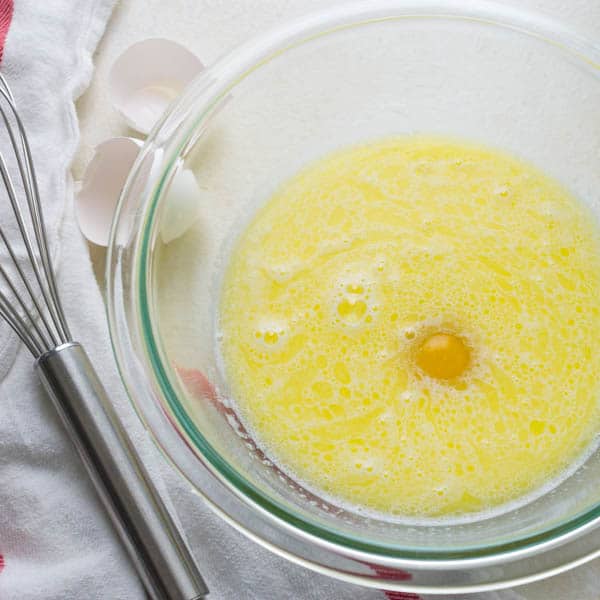 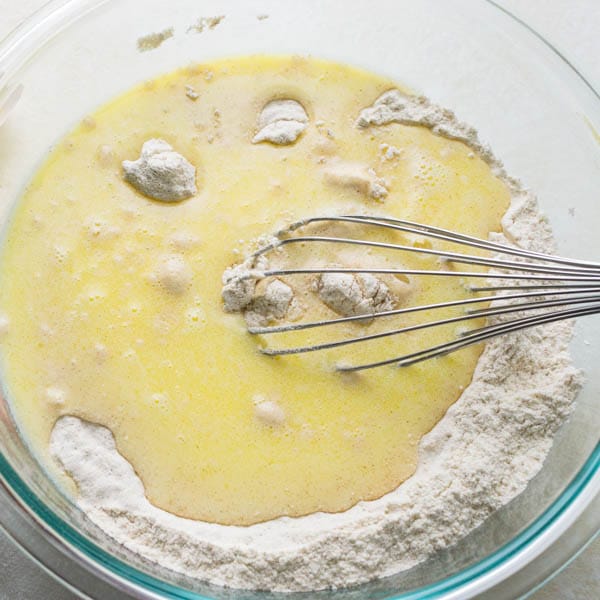 Then add the wet ingredients to the dry flour and yeast mixture (note: the baking soda comes later) and stir until the ingredients are well incorporated. 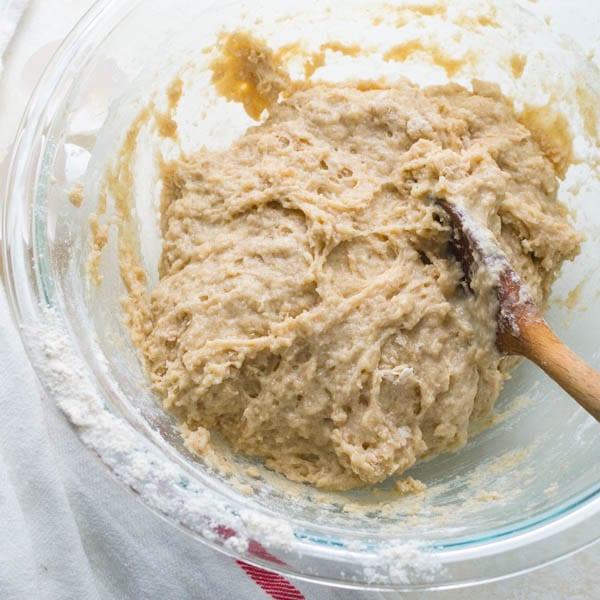 After the dough is mixed, THEN add the baking powder.  This is actually the same method I use in making my Asian steamed buns — but those are little pockets of bread and this is a whole loaf! 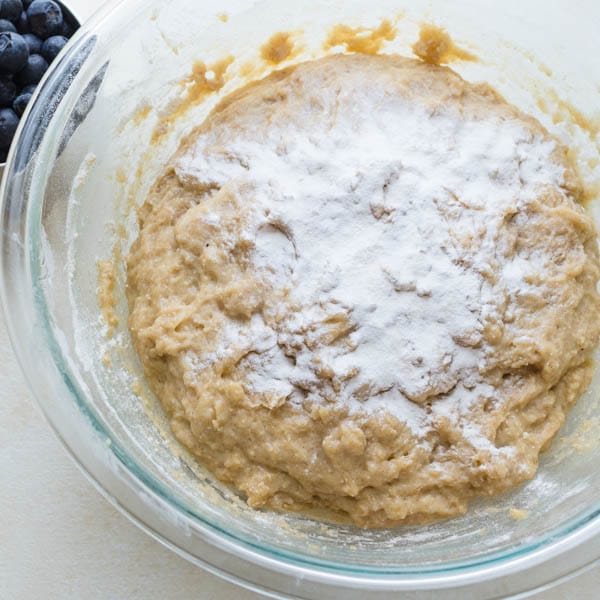 Sprinkle the baking powder over the dough and use your hands to knead it into the mixture until it’s evenly combined. 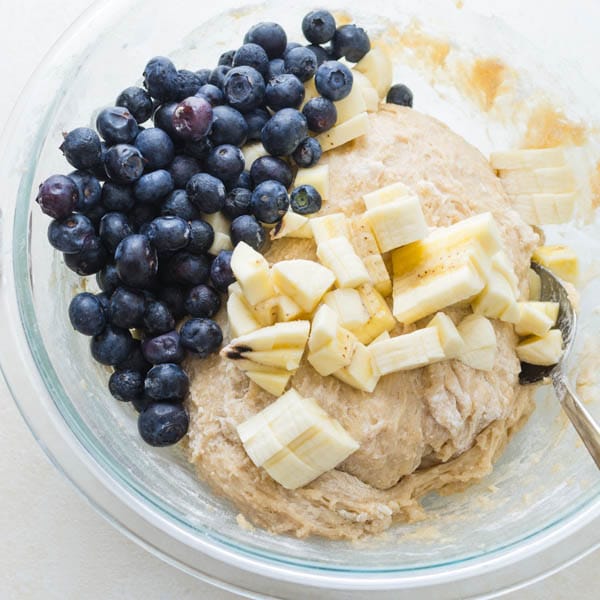 Next comes the fruit. I used sweet summer blueberries and a not-too-ripe banana.  In fact, this banana didn’t have any brown spots on the peel at all (which is the way I usually like to eat them). I carefully folded and stirred them into the batter, so as not to break them apart. 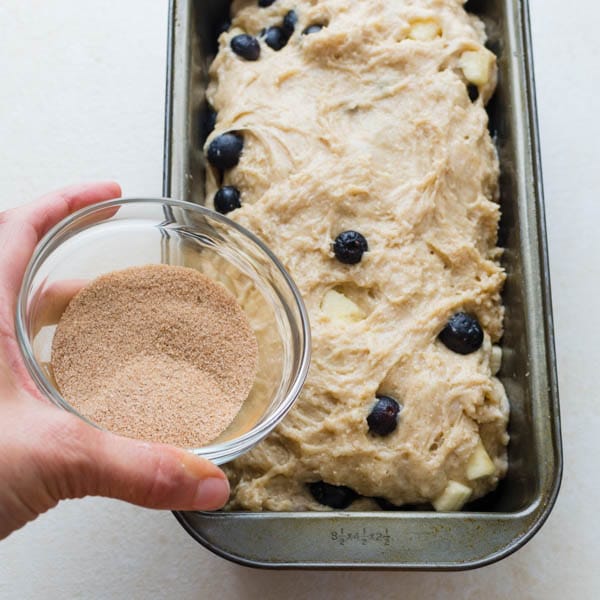 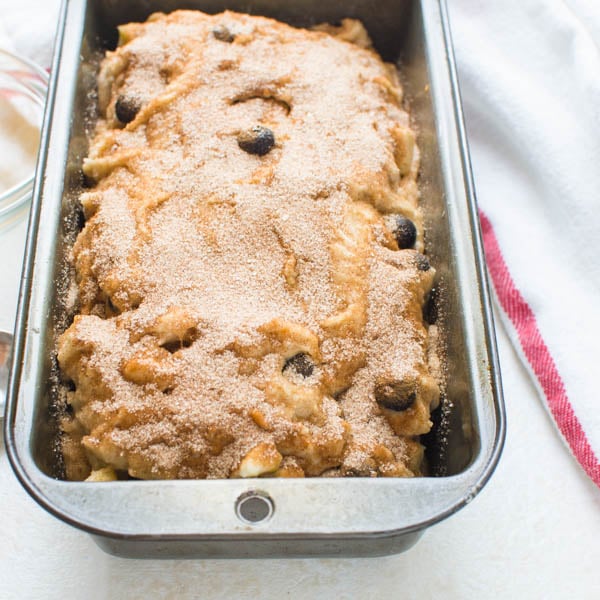 Transfer the dough to a prepared loaf pan and sprinkle generously with cinnamon sugar.  Bake the homemade blueberry bread until the crust is golden brown and a cake tester comes out clean — this took about an hour in my oven.  If your oven has hot spots, rotate the pan about halfway through baking so it cooks evenly. 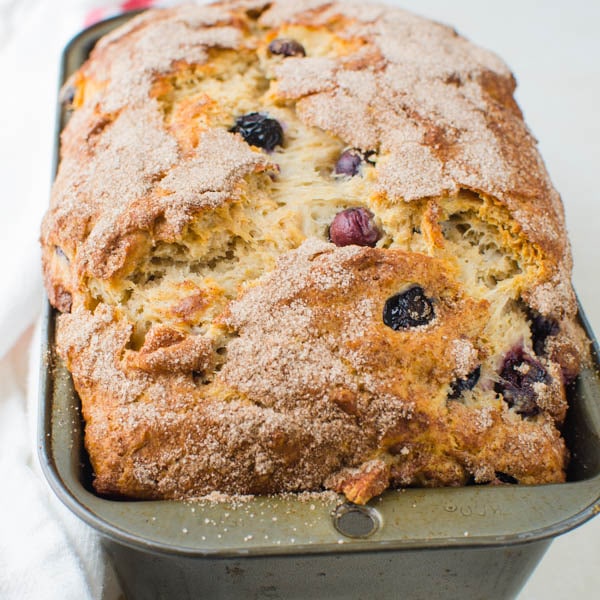 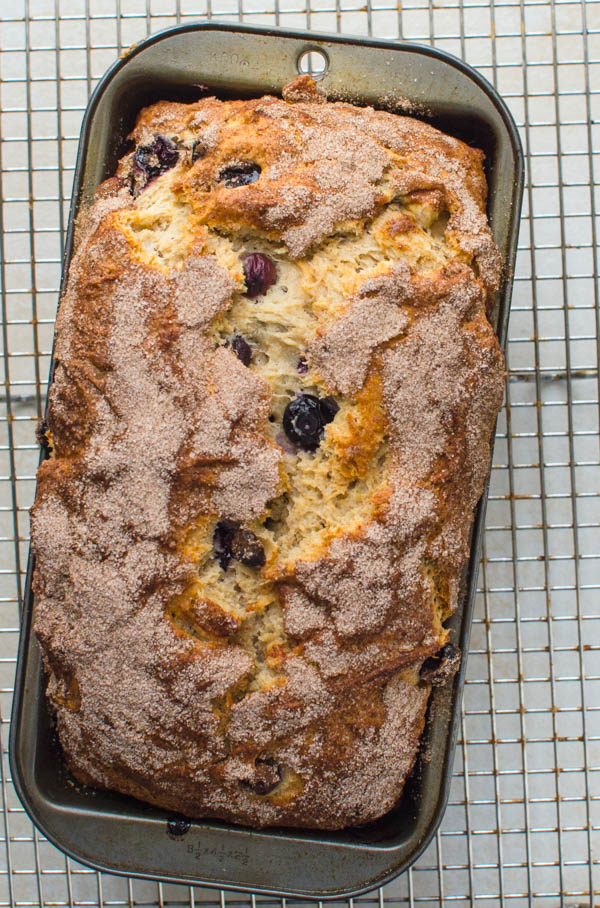 The golden-domed cinnamon sugar crusted loaf is really a thing of beauty and it fills the house with an enticing cinnamon aroma.  The rustic, crusty look of this blueberry banana bread practically screams homemade, don’t you think? You could make this a more healthy blueberry banana bread by swapping out one cup of all purpose flour for a cup of whole wheat flour, but I wouldn’t go with more than that or you risk having a heavy loaf. 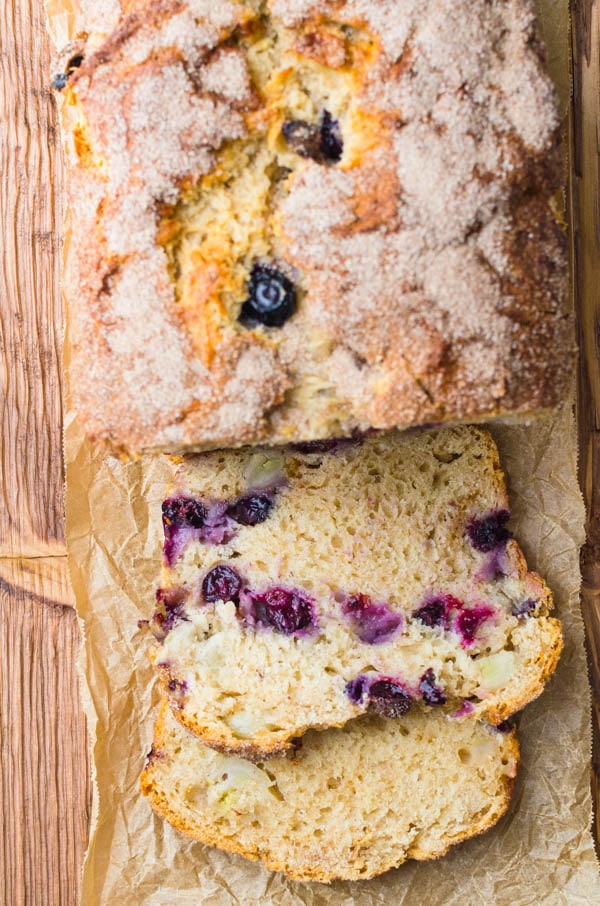 This is like a cinnamon yeast bread that’s speckled with creamy banana and pops of sweet blueberry.  The cinnamon sugar adds a crackly texture to the crust. 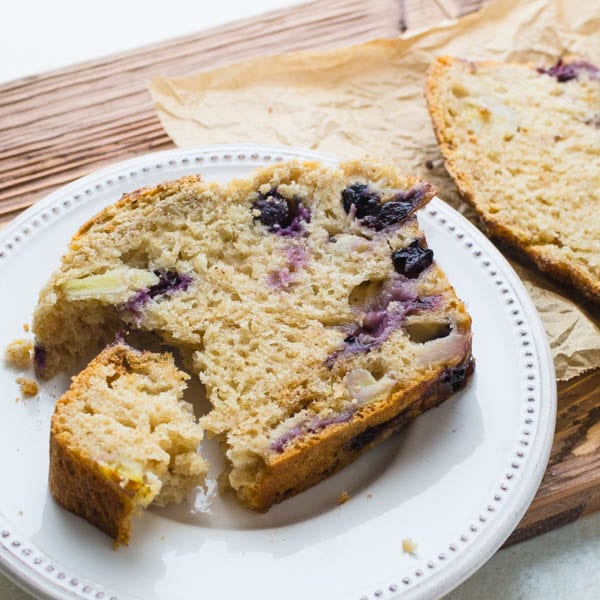 This blueberry banana bread recipe has a tender, slightly chewy crumb and as good as it is freshly sliced — it’s even better when toasted. Seriously.  You have to toast it — and slather it with butter.  I’m just saying’… 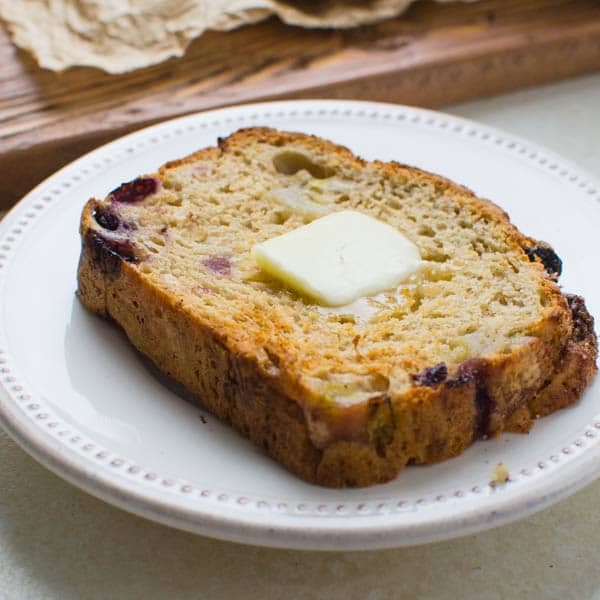 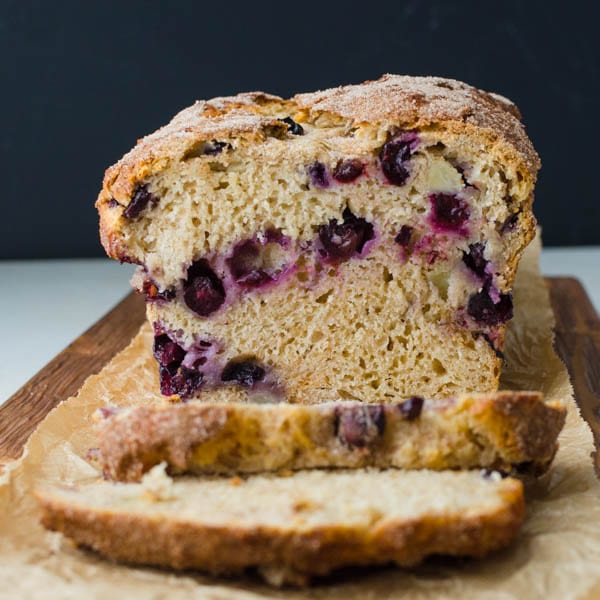 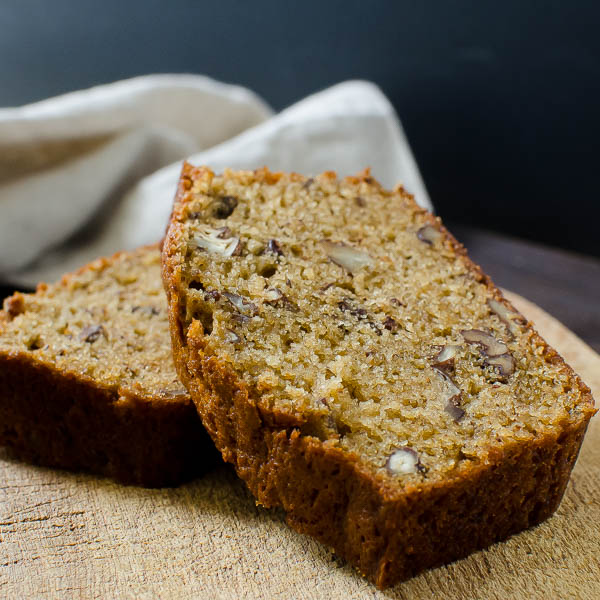 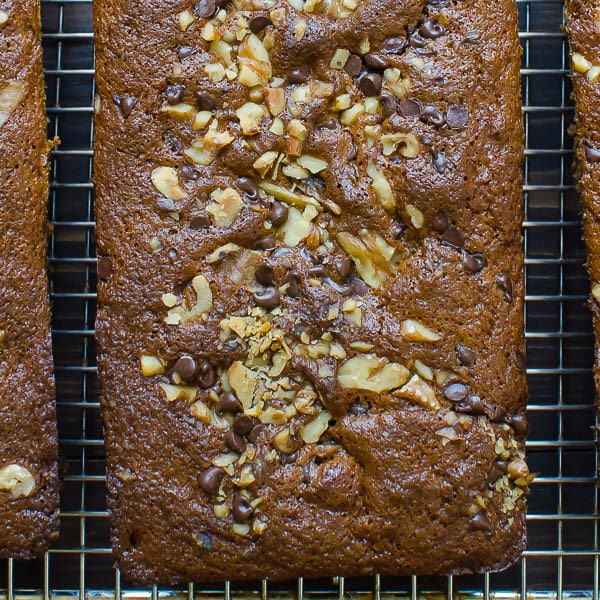 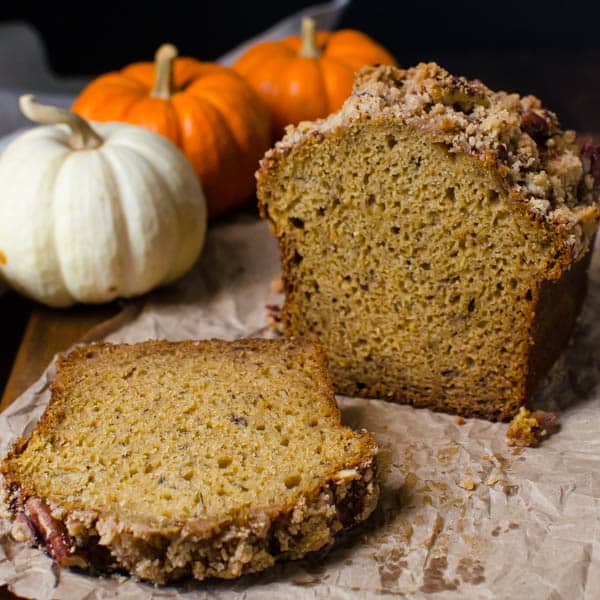