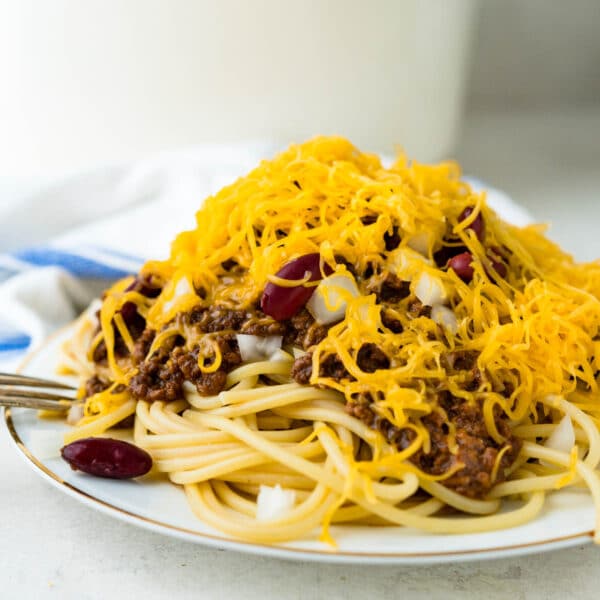 Cincinnati Chili
Unlike any other chili you've had, this classic Cincinnati chili recipe is thinner than traditional chilis with a deliciously unexpected spice blend that includes cinnamon, allspice and even chocolate! Use it to make Coneys or served over spaghetti with onions, cheddar cheese and kidney beans for a customary 5-Way chili.
Total: 1 hour 10 minutes
JUMP TO RECIPE PRINT RECIPE
Home | Recipes | Entrees | Meat | Beef | Classic Cincinnati Chili, Coneys & 5 Way Chili
78 shares

What is Cincinnati Chili?

This regional Ohio favorite, is a savory, spiced meat sauce that’s usually served over spaghetti or Coney hot dogs. The sauce is thinner than most traditional chili recipes and seasoned with cinnamon, allspice, cloves and oftentimes chocolate along with chili powder, cumin and cider vinegar.

Wondering how that combo might taste? Well, let’s dispel some myths. Though Cincinnati chili does have some unusual ingredients you’d normally associate with sweet foods, this meaty blend isn’t sweet and it isn’t overly spicy.

And you won’t find that same smoky quality normally associated with chili in this recipe. This one is truly unique.

How did it originate?

Like so many of the best foods in this melting pot of a nation, this renowned recipe originated with immigrants Tom Kiradjieff and John Kiradjieff, two American restaurateurs who emigrated from Greece.

They’re credited for developing this beefy stew seasoned with Mediterranean spices. It was initially meant to be a topping for Coney-style hot dogs, but customers also liked it as a topping over spaghetti.

The brothers offered other toppings like cheese and onions as well. They were so popular, they instituted the “Ways” method of ordering, to keep it simple and efficient. Trust me, 5 way chili is a thing!

Skyline chili is one of the most well known chili bar chains serving Cincinnati chili with locations in Indiana, Kentucky, Ohio and Florida.

If you don’t happen to live near a Skyline chili locale and can’t make it to Ohio to sample the real deal at one of the hundreds of chili bars across the state, then start with this classic Cincinnati chili recipe.

Though this might look like an imposing list of ingredients, you probably have most of them in your pantry already. I recommend making the chili one day before serving, so the flavors have a chance to meld.

What you’ll need to make this Cincinnati Chili recipe

It’s easy to make Cincinnati chili in the Instant Pot, Slow Cooker or Dutch oven, though the process is slightly different for each. For this batch I used the Instant pot, but I’ve given directions for the other methods below.

One note about using the Instant Pot is that the chili doesn’t thicken to a saucy consistency, but I’ve got a work-around for you.

How to make Cincinnati chili in the Instant Pot

Other ways to make this famous chili

It’s easy to make this chili in a slow cooker or dutch oven but there are a few differences in the methods compared to the Instant Pot. Here are the basics…

Note: you’ll need an extra cup of water for both of these methods as they have a longer cooking time and steam will evaporate over the course of the simmer.

Follow the same method as the Instant Pot, but add an additional cup of water to the pot.

Instead of pressure cooking, simmer the Cincinnati chili in a Dutch oven or heavy stock pot for 2-3 hours over medium to medium low heat with the lid slightly askew, so the steam can escape. Stir occasionally to prevent anything from sticking to the bottom of the pot.

Since slow cookers don’t have a sauté function, you’ll need to sauté the onions over medium high heat in a separate skillet on the stovetop. Once the onions have sautéed, add the tomato paste, followed by the spices, sugar and salt and cook for 1-2 minutes until very fragrant.

Add an additional cup of water to the slow cooker.

Transfer the onion mixture to the slow cooker and cook on low for 4-6 hours, stirring occasionally.

80/20 beef will give this Cincinnati-style chili recipe the best consistency, however, it also generates a lot of fat.

You can use a spoon to skim the fat off of the top of the chili while it’s still warm, but an easier method is to refrigerate the chili until the fat solidifies. Then use a spoon to scoop off the congealed orange layer, which naturally rises to the top.

I removed about 1/2 cup of fat from this pot. I recommend you do the same… Plus, the Cincinnati chili just tastes better without it. Check out the video to see how it’s done.

Can I freeze the chili?

Yes! Portion the chili into plastic storage containers and freeze for up to 2-3 months.

How do I thicken Cincinnati chili?

First, Cincinnati chili is meant to be thinner than traditional chilis. I’ve heard it referred to as soupy. It shouldn’t be too liquidy, but should be saucy. The best way I’ve found to thicken the chili without adding thickeners, is simply to simmer and let the chili reduce down through evaporation. If you’re making this in the Instant Pot, you’ll definitely want to let it reduce. Slow cooker and Dutch oven methods, won’t need as much.

It is until you put it over spaghetti or top your hot dog on a bun (unless those are gluten-free too).

Is this chili recipe keto?

If you skip the sugar, it would be a keto recipe.

How is Cincinnati chili different from other chili recipes?

It’s different in EVERY WAY. From the method of cooking to the unusual spices and other ingredients. Think of Cincinnati chili as more of a meat sauce and topping for other things and less as a traditional chili recipe.

Traditional ways of enjoying this chili almost NEVER include eating it by the bowl. It’s meant to be a meaty topping for other things… Namely Coney-style hot dogs or spaghetti.

The other thing to note is… this isn’t pretty food. It’s not highfalutin’ or styled to look like typical food-porn. It’s loaded and over the top. The thing you crave at two o’clock in the morning after a night of too much drink and/or dancing.

Cincinnati chili isn’t healthy — and it isn’t meant to be. Usually buried under an avalanche of bright neon cheese, this chili doesn’t try to be anything other than an indulgence to satisfy the most basic lizard part of your brain.

It has to be cheddar. It has to be finely grated. Packaged pre-grated cheese won’t have the same melt-effect. Grate your own. There should be enough cheese that you can barely tell what’s underneath it. Those are the rules. I didn’t make them up.

Coneys refer to hot dogs in a steamed bun. I recommend using a good hot dog with a snappy natural casing, but it’s up to you.

Hot Dog on a Steamed Bun + Chili – plain and simple, you can eat this with your hands.

A Hot Dog on a Steamed Bun + Cincinnati Chili + Cheese – an unholy amount of cheese. Try to eat it with your hands, but you’ll want to hunch over a plate to catch anything that falls out.

Hot Dog on a Steamed Bun + Chili + Mustard + Cheese (for that extra bit of tang).

Some people will add a little hot sauce to kick it up, but the key is to load up the hot dog to the point where you’re reasonably sure it will fall apart by the second or third trip to your mouth, at which point you have to reach for a fork.

It’s ok. You should expect and embrace the mess.

As a kid, my Mom would make her specialty chili and serve it over spaghetti. We called it chili-mac but her rendition was NOTHING LIKE THIS.

Two Way Chili – Chili on top of spaghetti (this is as close as gets to my Mom’s chili mac, but the two chilis are so different, it’s almost not worth the comparison.

Three Way Chili – Spaghetti + Chili + Cheese – Not a sprinkle of cheese… Giant Handfuls. Enough to spill off the plate. The finely grated shreds will melt readily on a steaming heap of hot chili and spaghetti, giving it that oozy, melty almost plasticized, varnish. Yeah, that’s the good stuff.

Five Way Chili – Spaghetti + Chili + Cheese + Onions + Kidney Beans — and really, if you’ve come this far — why not go all the way?

Giant Mea Culpa – Cincinnati Chili is ALWAYS served with oyster crackers. I bought them, I reminded myself to use them and yet — they remained in my pantry during the entire shoot. Don’t make the same mistake I did!

Do you mix the spaghetti with the chili?

No. Though the sauce was first meant to be mixed with the spaghetti, customers preferred it as a topping, so that’s the way they do it.

Do you twirl spaghetti chili with a fork?

No. Only folks “not from around here” twirl their Cincinnati chili spaghetti with a fork.

Count me in that group, because I twirled… Oh, the shame.

Real Cincinnatians cut the massive pile of pasta, chili and beans with a knife and fork. 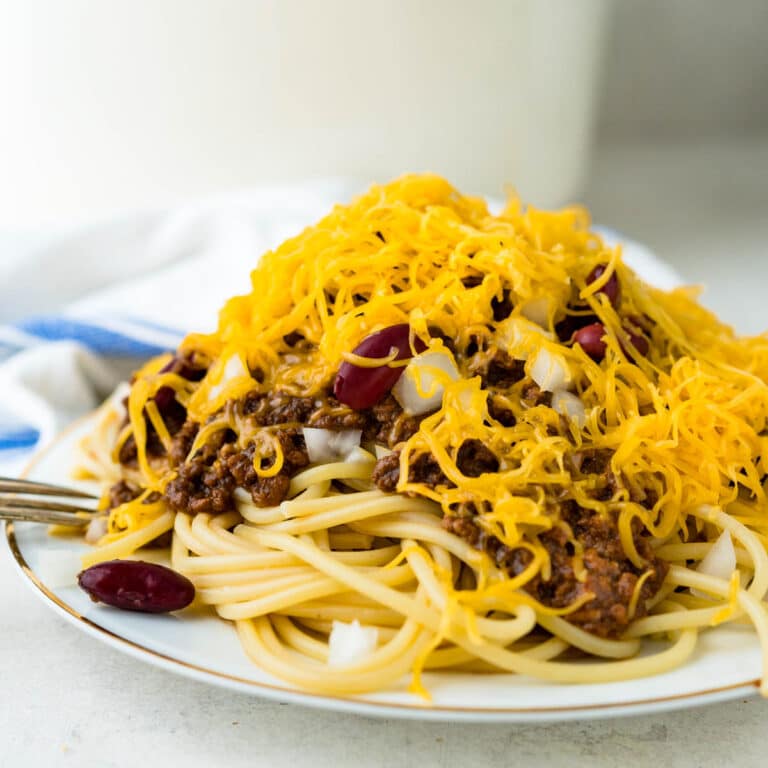 TO SERVE ON CONEYS:

Note: Nutritional info is for chili only and does not include 5 way chili or coney dogs and the toppings.