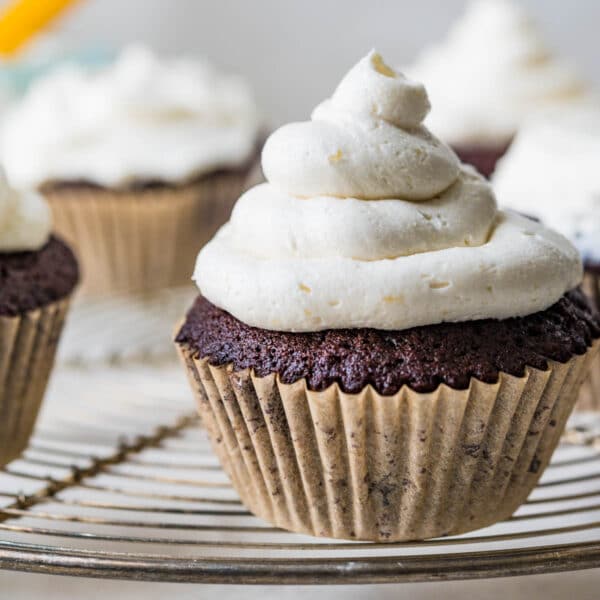 Ermine Frosting (a.k.a. Myne's Whipped Icing)
This whipped icing is the one my grandmother always used for her richest, most decadent cakes because it's light, creamy and not overly sweet. Ermine frosting is easily spreadable and tastes like the best whipped cream frosting you've ever had (but there's no cream in it).
Total: 35 minutes
JUMP TO RECIPE PRINT RECIPE
Home | Recipes | Desserts | Grandmother’s Whipped Icing (a.k.a. Ermine Frosting)
123 shares

If you’re looking for a fluffy, creamy whipped icing, this one is, by far, the best. Truly. This whipped buttercream frosting is shockingly light, creamy and softly, but not cloyingly sweet. What “it” is, is ermine frosting and it’s a thing. This recipe is also also known as “flour frosting” or “boiled frosting” and it’s exceptional.

Whipped icing was my grandmother’s specialty

I hadn’t made this whipped icing in a long time, but I was leafing through a hand-written cookbook of my grandmother’s (Myne) favorite recipes and I stopped cold when I saw this one.

Reading over the ingredients and her simple instructions, I could practically taste the lightness and creamy sweetness of her whipped icing that was always paired with her rich chocolate crock pot cake.

That cake (and especially the frosting) were legendary with our crew.

We’ve always referred to it as “Myne’s whipped icing” and up until very recently, thought it was our secret family recipe.

Then as I was doing a bit of research, I discovered that my grandmother’s whipped icing was actually an established and popular one known as ermine frosting. Who knew?

What is ermine frosting?

Ermine frosting (a.k.a. boiled milk frosting or flour frosting), is a vintage recipe that has been around since the early 1900s.

It’s the preferred frosting for Red Velvet cakes and very rich chocolate ones because this impossibly creamy whipped icing isn’t as sweet as a regular buttercream frosting and is comparatively much lighter, more balanced and impossibly creamy.

Looking at this list of ingredients, you’re probably scrunching your nose, thinking whaaatttt???? But trust me, this ermine frosting recipe produces the most ethereal, light and I daresay, ADDICTIVE whipped icing you’ve ever had.

How to make ermine frosting (a.k.a. Myne’s whipped icing)

Check the quick video for how to make this whipped icing recipe so you can see what the milk and flour mixture should look like when cooking and how chubby it is after cooling.

Some icing recipes are so sweet that I purposely scrape away the excess and just eat the cake. This usually happens with birthday sheet cakes from the grocery store. You know, the ones that are decorated with mounds of frosting. To me, the flavor is artificial and overly saccharine.

This creamy, whipped ermine frosting is nothing like that.

It’s lightly sweet, shockingly creamy and structurally sound. It has heft, but doesn’t feel heavy. I’m telling you, this recipe is like a magic trick.

Why this whipped icing recipe works

This boiled frosting recipe uses real butter instead of shortening, so it’s got the natural fatty mouthfeel of a good buttercream.

The pudgy milk and flour pudding lends volume and structure to the ermine frosting.

Unlike most buttercream frosting recipes that use powdered sugar, this whipped icing uses granulated sugar, which you’d think would be gritty, but it’s not. Whipping the icing with a hand mixer for a full five minutes helps dissolve the sugar into this plush whipped buttercream and makes it impossibly light.

A pinch of salt balances the flavors.

Can I make the whipped icing in advance?

Yes. You can make this several hours in advance and the whipped icing can be kept at room temperature until you’re ready to use it.

Can I refrigerate leftover whipped frosting?

Can I pipe whipped icing?

Absolutely. The structure of this icing recipe is perfectly suited for piping. It holds its shape beautifully, but it’s also equally easy to work with when using an offset spatula or a kitchen knife.

How much whipped icing will this recipe make?

This recipe makes enough icing to frost one 2 layer 9″ cake or one 13″ x 9″ cake with an ample layer of frosting. 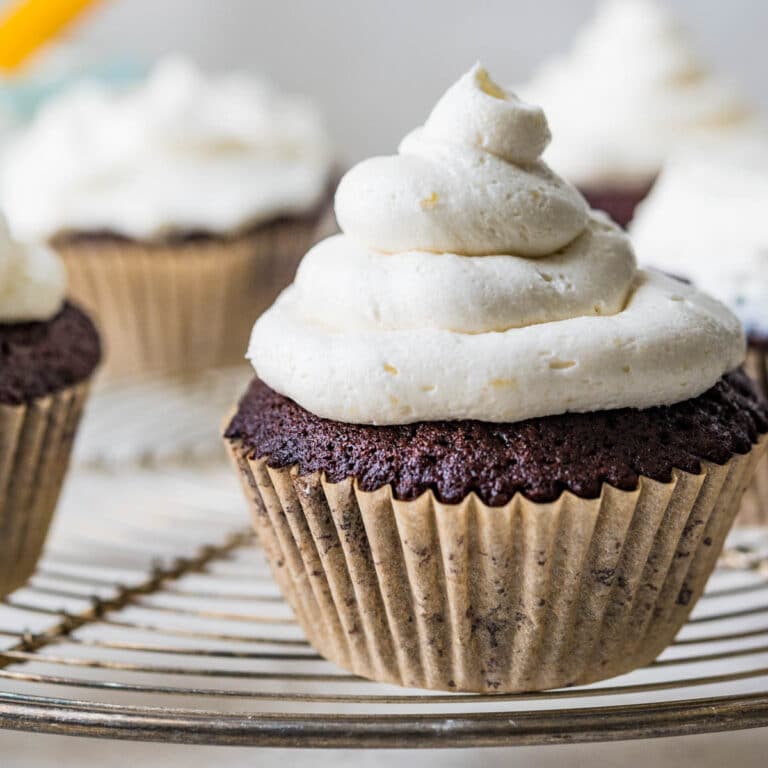 This whipped icing is the one my grandmother always used for her richest, most decadent cakes because it's light, creamy and not overly sweet. Ermine frosting is easily spreadable and tastes like the best whipped cream frosting you've ever had (but there's no cream in it).
Course Dessert
Cuisine American
Keyword frosting, icing
Dietary Restrictions Egg Free, Vegetarian
Prep Time 10 minutes
Cook Time 5 minutes
Total Time 35 minutes
Servings 24

This recipe will frost a standard size 9″ layer cake, 9×13 sheet pan or 24 cupcakes.