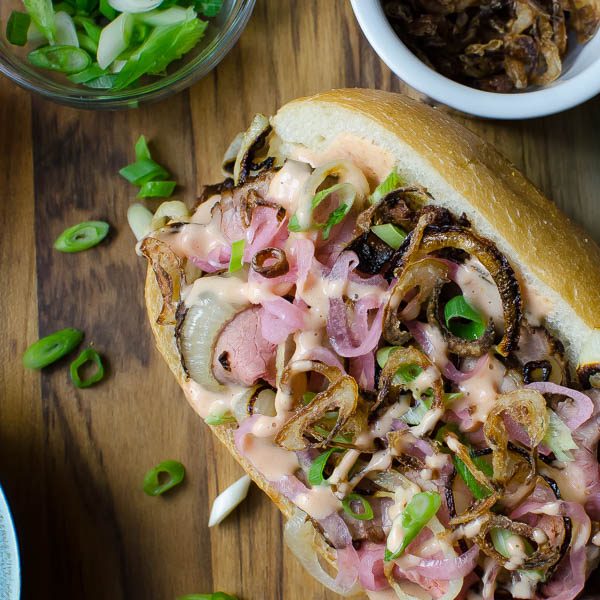 As roast beef sandwiches go, this one is a doozy. But it’s not for the feint of heart. It’s a very chefy recipe and requiring multiple components, but this Don’t Cry For Me Argentina Roast Beef Sandwich is the best you’ll have.

Hello.  I’m Lisa… and I’m a cookbook hoarder.  Sometimes my obsession with cookbooks feels like I should be going to weekly hoarders anonymous meetings while simultaneously divesting my collection to those less fortunate than myself…. say, those with only 2 or 3 cookbooks.

Mine take up, not one, not two but three entire shelving units in my house.  So you might ask what would draw me to yet another cookbook.

It was the title… A SUPER UPSETTING COOKBOOK ABOUT SANDWICHES,  by Tyler Kord, Chef No. 7 Sub.  And there was one sandwich in particular that caught my eye…  “Don’t Cry For Me Argentina Roast Beef Sandwiches —Makes 4 large sandwiches that will make you forget about the 2014 World Cup.”

I’ll admit, I spent an entire indulgent weekend floating around the pool, sipping adult beverages and devouring this book — and in my humble view, it’s a better read than an actual cookbook.  At least for a home-cook like me and probably you.  But maybe that’s the point.  To whet your appetite with quality food porn and charm the pants off you with his snarky,  stream-of-consciousness writing style.  This book reads like a compilation of blog posts and Tyler gripes, rants and generally kvetches his way through the cost of quality ingredients, the treatment of the animals  that so often are the source of those ingredients and the ultimate defense of a $9 sandwich.

Pithy and entertaining with sandwich names, descriptions and photography that will rev up your appetite, like:

THIS WILL BE OUR YEAR

THE BATTLE OF PUEBLA

THE BATTLE ON PORK CHOP HILL

THIS IS A CHICKEN SANDWICH

It is only when you resolve to make one of the sandwiches that you’ll begin cussing like drunken sailor.  Because these recipes — like all chef-y dishes — are made up of multiple components, each requiring their own subset of ingredients and instructions.

Let’s use the Don’t Cry For Me Argentina sandwich as an example.  Upon first glance it looks like a pretty straight forward recipe — only 7 “Ingredients”.

Until you start breaking down those ingredients —

Literally the only 2 ingredients that didn’t have a corresponding recipe attached were the sub rolls and the scallions.  But I’m a food blogger, so I pressed on — pissed but undaunted.

I figured I’d start with the roast beef.  It had a special wet rub that needed to rest on the roast overnight, so I began the assembly.

I got out a bowl to assemble the rub and low-and-behold the 4th “ingredient” listed was Fried Shallots (recipe on page 175).

I hadn’t even begun — and he was sending me off on another recipe.  Godammit!

Then came the Smoked French Dressing.  Um, the recipe LITERALLY calls for setting up your grill or smoker and SMOKING 1/2 cup of ketchup for this sauce.

Here’s an excerpt from Tyler’s instructions:

“So you’re going to smoke ketchup now.  It will not get you high, but it will make everything you put it on taste like a really awesome hot dog…. you could put a lit charcoal briquette on a baking sheet, put a small pile of wood chips on top of it, put a dish of ketchup a few inches away from it, and cover the whole thing with a box, using a stick that’s taller than the box to hold it up at one end like you are trying to catch a cartoon rabbit.  Do a Google Images search for “cartoon rabbit trap” and you will see a few examples.”

Tyler goes on for several paragraphs about the flavor benefits of actually smoking the ketchup , before grudgingly admitting that you could be a wuss (my words, not his) and use liquid smoke instead.  Wuss reporting for duty!

I also confess that I didn’t make his pickled onions — because I still had a boatload leftover from that last sub sandwich I made.  I considered that a brief reprieve.

I have to give the devil his due, though.  That roast beef was PERFECT.  Slow roasted at an uber-low temperature for 2 hours.  Resting for half an hour, then chilled to make it easier to slice.  It was tender and juicy with a smoky sweet, tongue tingly finish from the Ancho Chile.

The sandwich itself was a two-handed, hunched over your plate affair.

Scott and my friend, Nola were my guinea pigs and we scarfed down these roast beef sandwiches with equal parts unbridled gustatory exuberance and 20/20 hindsighted belly-busting regret.

Was it great?  You bet.  Would I make it again?  Hell, no.  Instead, I’m scheduling stops at all three No. 7 Sub on my next trip to Manhattan!

Click here to get your own copy of A SUPER UPSETTING COOKBOOK ABOUT SANDWICHES.

“I received this book from Blogging for Books for this review.”  This post contains affiliate links.  If you purchase the cookbook, I’ll get a small commission which doesn’t impact the price of the book for you.   I will use my commission to buy a sandwich at No. 7 Sub.

For the Roast Beef

For the Pickled Onions

For the Roasted Onions

For the Sandwiches — each of the above recipes plus

Tasting notes — I would add some fresh cilantro leaves to this sandwich.