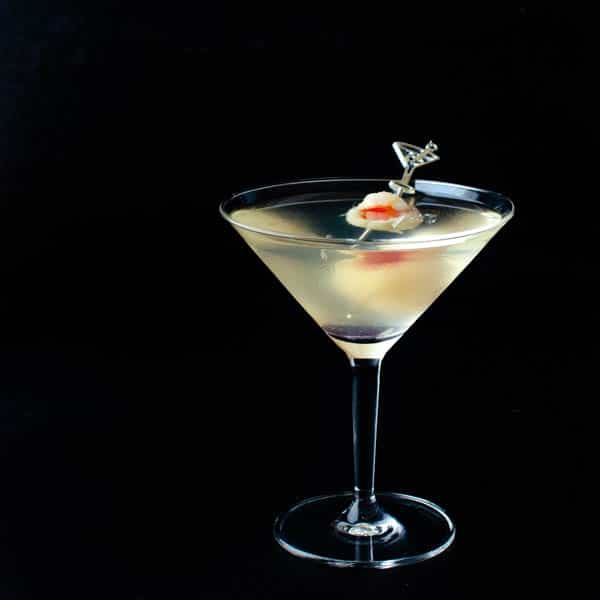 This quick and easy lychee and elderflower martini is a smooth, floral, tropical drink that’s best served icy cold. My lychee martini recipe is a hit at Halloween parties with a creepy lychee eyeball garnish, but you’ll want to make these exceptional lychee cocktails for any special occasion… like Friday night.

If you’ve had lychees before, I’m not surprised. They’re not a widely commercially available fruit and you probably won’t find a fresh display at your local supermarket, which adds an air of novelty to these lychee cocktails.

That’s because lychees are a subtropical fruit native to China, but found widely throughout the world in other hospitable climates like Australia, Thailand, India, South Africa and a few spots in the United States (Florida, Hawaii and California).

Lychees are closely related to rambutan and longan berries with a bumpy, leathery red skin and large, dark, smooth seed. The texture of lychee fruit reminds me of a peeled grape, but their floral flavor hints of roses and elderflower. This post breaks down the flavor of lychees.

Do I need fresh fruit for lychee cocktails?

No. Even if you don’t live in a place where lychees are grown, you can usually find canned lychees at the grocery store or in specialty markets. If not there you’ll definitely find them online. I used Roland brand canned lychees in heavy syrup for this lychee martini recipe.

Even if you’re not much of a martini drinker, this simple lychee cocktail might change your mind. Despite the combo of vodka, vermouth and elderflower liquor, it’s a surprisingly smooth and sip-able drink, and I’ve done enough research (ahem) to know.

Cocktail experimenting is arduous. You wouldn’t believe how many variations I went through before settling on this balanced, sip-worthy recipe for my lychee elderflower martini. My first renditions were purely lychee fruit and vodka, but they fell flat. Most martini recipes include vermouth, so I added some and it got better, but not quite there. Lemon always brightens up a cocktail, so I added fresh citrus juice. It was an improvement to be sure, but again, something was missing… but what?

It was the lychees — their flavor didn’t quite pop in the lychee cocktail. Instead, it was more of an afterthought. Not what I was going for. So I closed my eyes, and took a deep whiff of the canned fruit. It reminded me of something… another whiff… “I’ve smelled this before...” Finally, it dawned on me. ELDERFLOWER. Or more specifically, elderflower liqueur.

Side by side comparison

To verify, I did a side by side “smell test”. First a whiff of lychees in syrup, followed by a whiff of elderflower liqueur. To my (admittedly) novice nose, the similarity was remarkable. A taste test confirmed it. Elderflower was the missing ingredient and it made all the difference. You can use St. Germaine, Côte Jolie, or other elderflower liquor for this recipe. Côte Jolie is what I had on hand and it costs about 1/3 the price of St. Germaine, just saying.

Can I make lychee cocktails by the pitcher?

Yes. It’s easy to make a whole pitcher of this lychee martini recipe for parties. Instead of shaking the contents with ice in a cocktail shaker, mix them in your pitcher and chill them in the refrigerator for several hours. I have measurements for a pitcher-sized recipe in the recipe card below.

Lychee elderflower martinis can easily be transformed into a tasty/spooky Halloween cocktail by doctoring up the lychee garnish. I didn’t have blueberries on hand like they show in this (very realistic) tutorial, but halving a maraschino cherry makes a creepy looking eyeball to gild your spooky lychee cocktail for Halloween.

FOR ONE LYCHEE MARTINI:

FOR A SMALL PITCHER OF MARTINIS:

FOR EACH LYCHEE MARTINI: