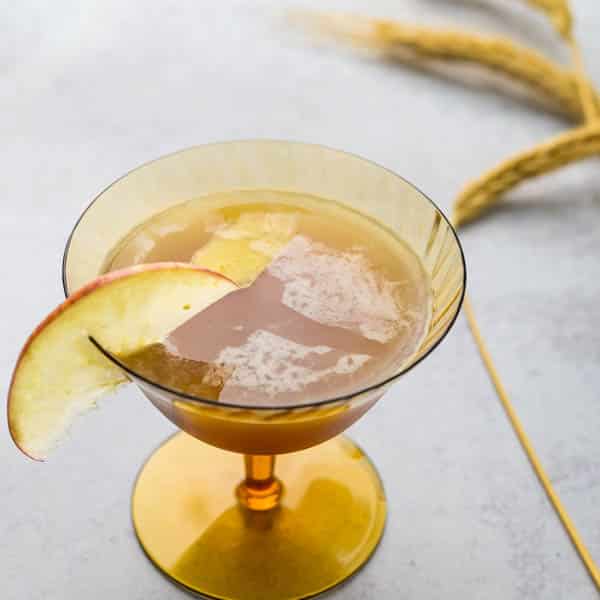 Here’s a sophisticated cocktail that makes the most of apple season. With a double dose of cider and apple brandy, this spiked cider drink is woodsy, tongue tingling and perfect for fall or winter. Sweetness from maple syrup and a little zing from muddled ginger sets this apple bourbon smash apart. If you want a smash cocktail with a lip-smacking ginger-bourbon nose and an icy, tingly finish – this one is perfect for the season.

This refreshing apple cider, ginger and bourbon smash is a real eye opener… great for those odd-ball warmer-than- normal autumn days. If you’re like me and live in the tropics, this bev is perfect for marking the start of fall while staying cool at the same time.

What is a smash cocktail?

Classically speaking, a smash is open to individual interpretation based on the season and your ingredients. The rough framework usually includes smashing an aromatic like herbs or (in this case) ginger, to release their essential oils. Blended with your choice of spirits and other ingredients, it creates a lively, bracing drink.

Components of a smash

Read more about the history of the smash cocktail here.

Do I need to strain the spiked cider cocktail?

If you’ve ever bitten into raw ginger, you know how potent it can be. Even a small nugget of raw ginger can overpower tastebuds, therefore, I do recommend straining. It will prevent little specks and bits of ginger from slipping into your drink, so the only thing you’ll taste is the mellow bourbon flavor with the zingy combo of juices and aromatics. If you don’t have a fine mesh strainer, muddle a thin piece of ginger to release the flavors for your bourbon smash cocktail.

Optional garnish for a sophisticated cocktail

In my opinion, if you’re going to the trouble to mix a craft cocktail, it should come with some type of garnish. Nothing kitschy or blaring, but something simple that gives you a hint of what you’re about to enjoy. In this case ginger and apple are the obvious choices.

For the ginger, look at the whole knob of ginger and slice a thin piece sliced crosswise (or if it’s a small, finger shaped piece, slice it thinly on the diagonal). Don’t worry about peeling the skin — you’ll want to leave it on so it’s identifiable. Float the thin piece of ginger on top of the bourbon smash.

For a sophisticated apple garnish for this cocktail, I have two thoughts. If you’ve got a large apple, just cut a thin wedge from stem to stern (so to speak). Either float it in the drink, or slip it onto the rim. If you have a small apple 3″ or less in diameter, a more dramatic approach would be to slice a thin cross section from the middle of the fruit, this shows the detail of the apple. With a sharp, thin knife, cut a slit from the center of the fruit out to the edge (the radius) and slip that slit over the rim of the cocktail glass.

You could also make lemon slices, however the lemon isn’t a prominent player in this drink, so I’d opt for the first two.

This sophisticated bourbon smash is a peppy, zippy sipper before dinner. My tasters, declared it to be unexpected (even the one’s who weren’t crazy about bourbon), couldn’t stop sipping — and consequently, drained their coupes.