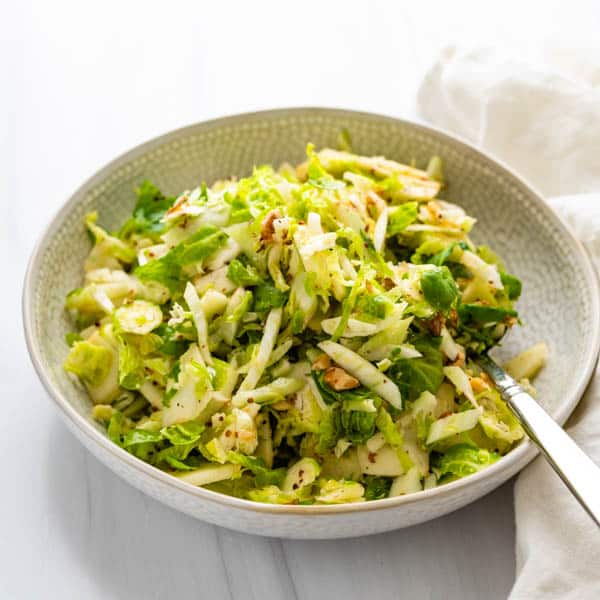 Crunchy Brussel Fennel Apple Slaw
Slaw doesn't have to boring, and this one is anything but.  Use the slicer attachment on the food processor to make quick work of the veg! There's no mayo in this tangy crunchy side, so it's perfect for picnics and cookouts.
Total: 30 minutes
JUMP TO RECIPE PRINT RECIPE
Home | Recipes | Recipe Collections | Barbecue & Cookout Side Dishes | Crunchy Brussel Apple Fennel Slaw
423 shares

This simple, healthy shaved brussels sprout salad is a tasty twist on traditional coleslaw and it’s ready in minutes by using a food processor to slice the veg.  With a tangy sweet honey and whole grain mustard dressing this brussel apple fennel slaw is light, crunchy and satisfying. Toasted walnuts add even more texture. It’s a quick and easy side dish for any cookout or barbecue. Try my brussel sprout slaw with grilled chicken, pork and seafood. Delicious! 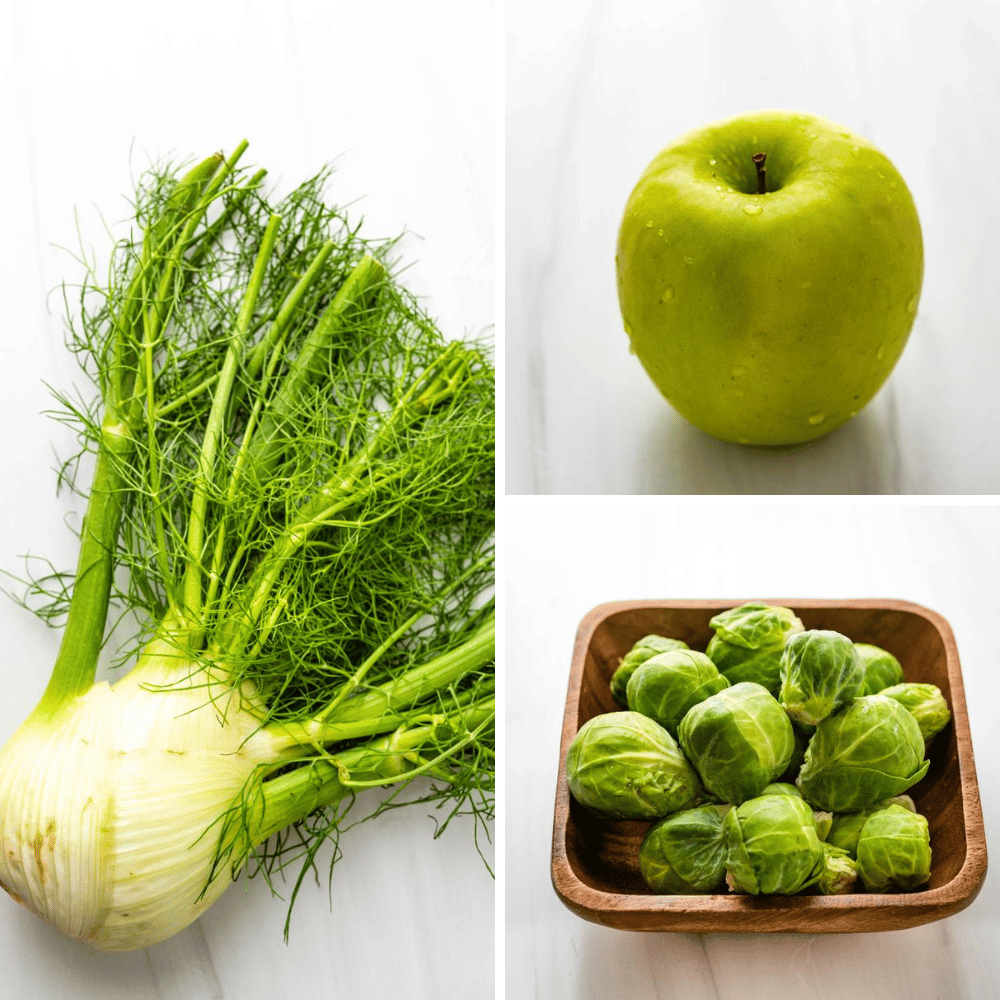 Now don’t get me wrong… I love a good old fashioned potato salad or pasta salad as much as the next guy, but this tempting brussel sprout slaw is a delightful diversion from the standard. It’s zippy and punchy, filled with pleasing textures and zesty, puckery flavors. Let’s get started.

Brussels sprouts are like mini cabbages (which is why I chose them for this brussel sprout slaw). When raw, they’re not as pungent as they are when cooked and only need to be thinly sliced (either in the food processor or with a mandoline or good chef’s knife) to to make the brussel sprout slaw.

Granny Smith Apples are generally more tart than sweet and will hold their shape without turning brown immediately, plus the dressing has an acid in it which helps to prevent oxidation.

Fennel is very crunchy and has an anise flavor (licorice). I’m usually not fond of licorice as candy, but this crunchy, vibrant veg is ideal in the slaw. This recipe  only uses half a bulb of fennel. Note: if you use the food processor to slice the fennel, you’ll likely get a few slices that look like large, thin discs. Use a knife to turn those discs into matchstick sized pieces to better blend with the slaw.

Walnuts are a natural pairing with apples and brussels sprouts, so they fit right into this hearty shaved brussel sprouts salad.  You’ll want to toast the nuts until they’re fragrant and have taken on some color. Toasting will deepen the flavor and enhance the crunch. 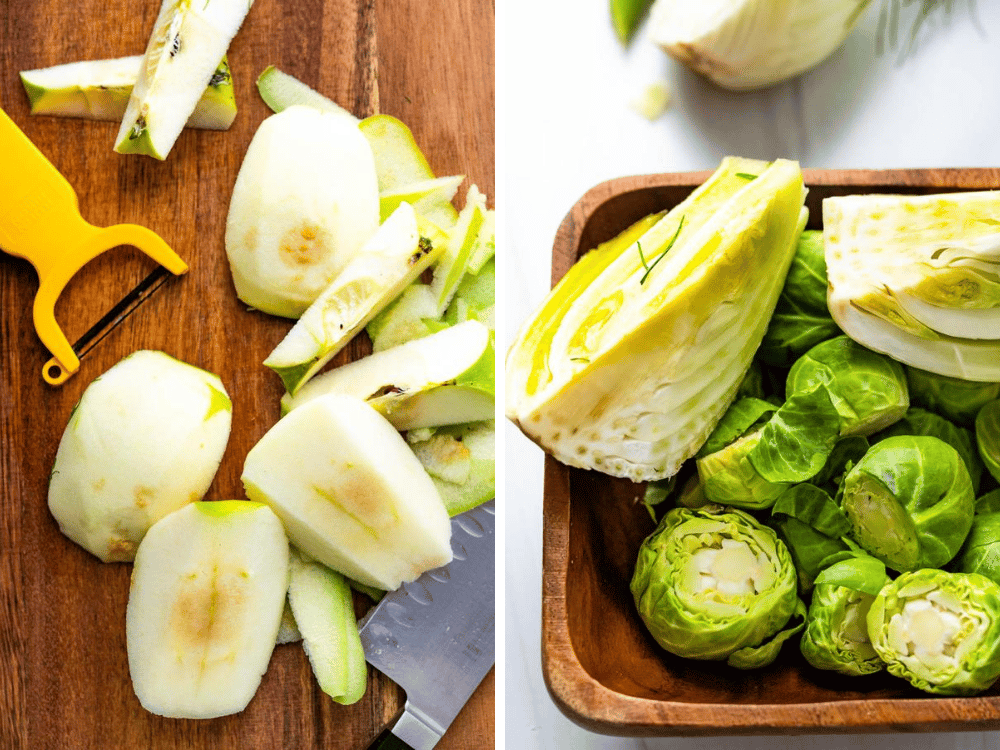 Don’t have a food processor?

You don’t have to have one. Make this shaved brussels sprouts salad with a little bit of elbow grease. 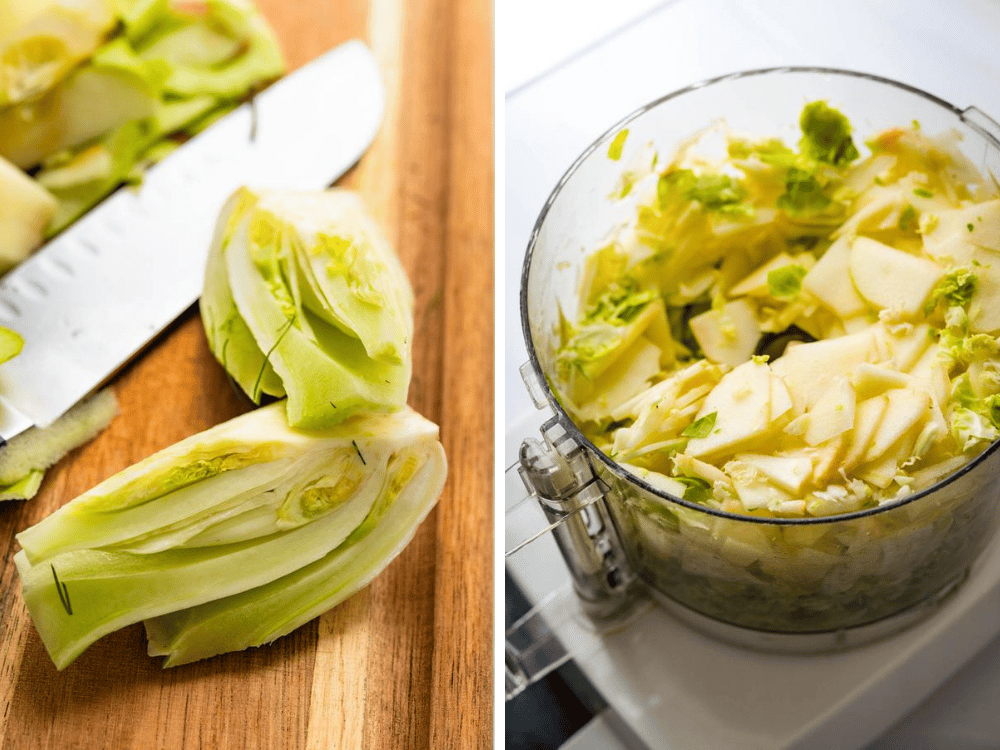 BOLO – be on the lookout

After processing in the food processor, if you get any inordinately large pieces of fennel or apple, use a sharp knife and cut them into matchsticks or bite sized pieces. I found that the food processor shaved the apple into thin, bite sized pieces and the brussels sprouts had exactly the right cut for the fennel apple slaw. Be on the watch for the fennel however, because depending on how they go down the chute, you might end up with a few larger, more unwieldy pieces. Use your knife and cutting board to finish the job. 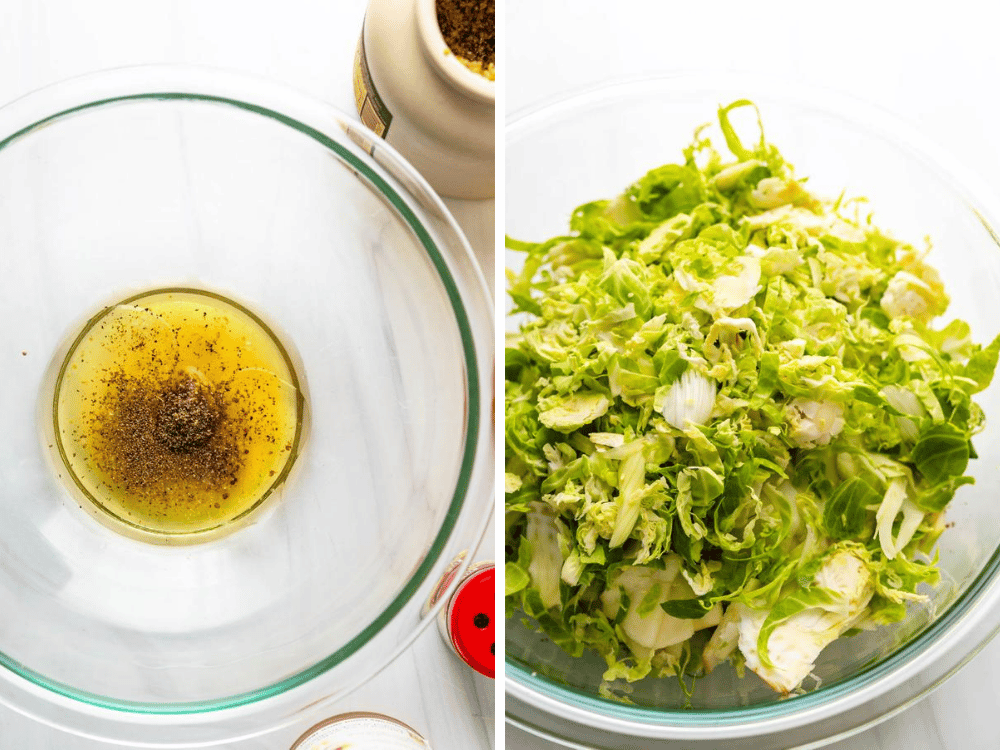 Ingredients for slaw dressing – no mayo

You’ll love this easy slaw dressing because it has no mayonnaise, which makes it light, tangy and bright. The honey mustard subtly naps the shaved brussels, apple and fennel so that each bite of the slaw is flavored with the dressing, but not drenched in it. That’s key. No one wants soupy slaw. 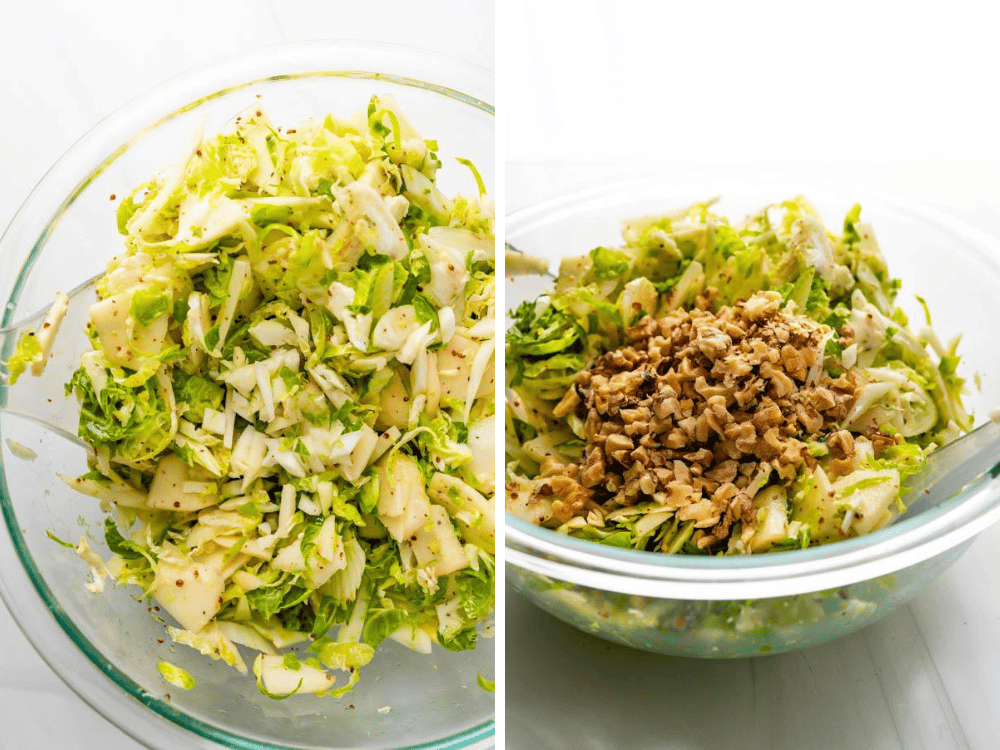 Best served the day you make it

Add the toasted walnuts just before you serve the slaw, to preserve the crunch and toasty flavor. This salad will hold up in the refrigerator for a few days, however, it really is best the first day. The flavors and textures will be at their peak. Luckily, brussel apple fennel slaw isn’t a very involved side dish, so you can leave it to make until the last minute without feeling harried. 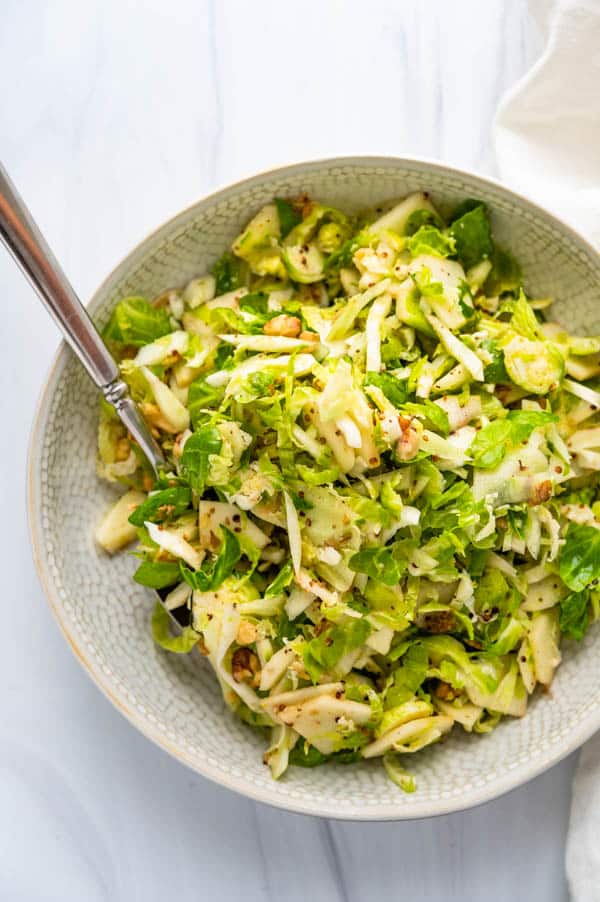 What to serve with brussel fennel apple slaw: 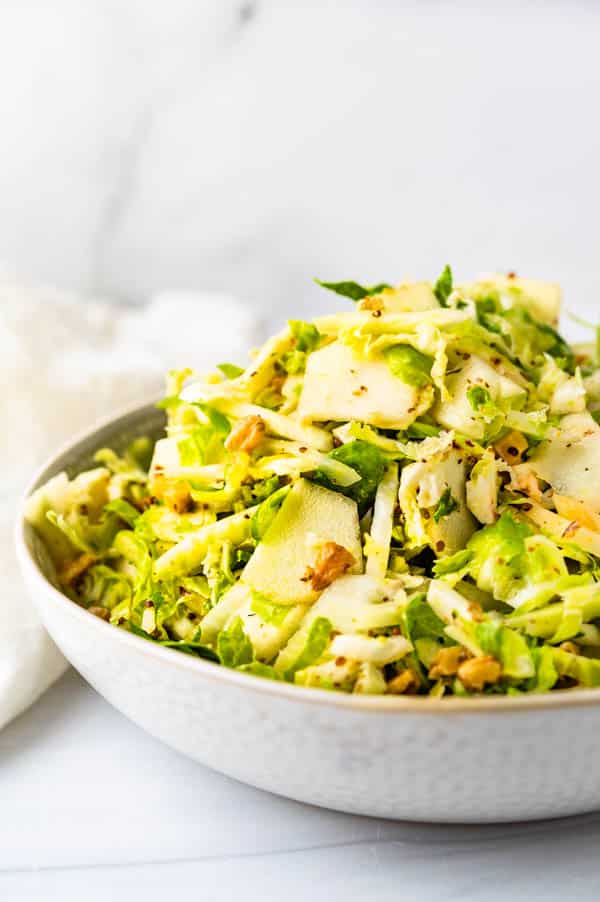 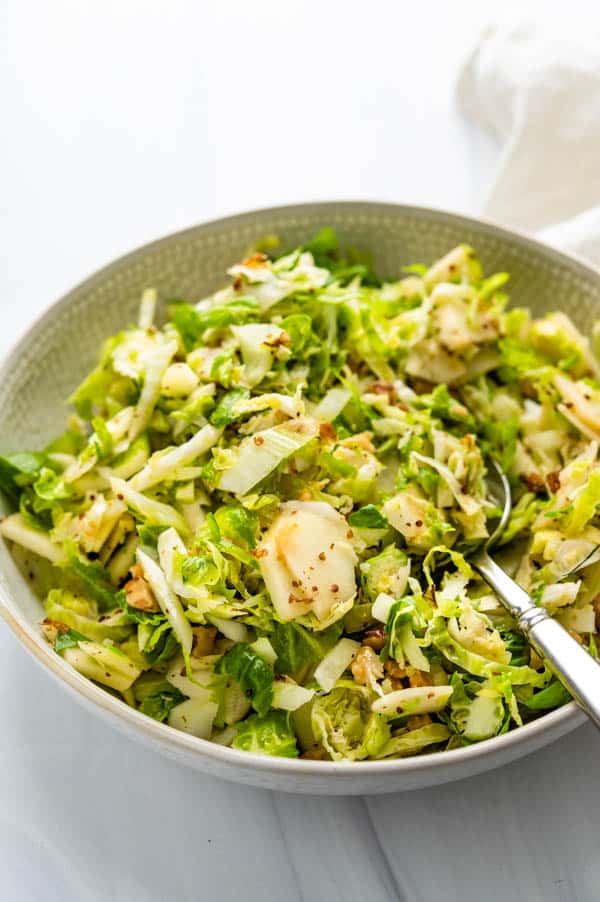 Slaw doesn't have to boring, and this one is anything but.  Use the slicer attachment on the food processor to make quick work of the veg! There's no mayo in this tangy crunchy side, so it's perfect for picnics and cookouts.
Course Salad, Side Dish
Cuisine American
Keyword apple, brussels sprouts, fennel
Prep Time 30 minutes
Total Time 30 minutes
Servings 6

FOR THE HONEY MUSTARD DRESSING 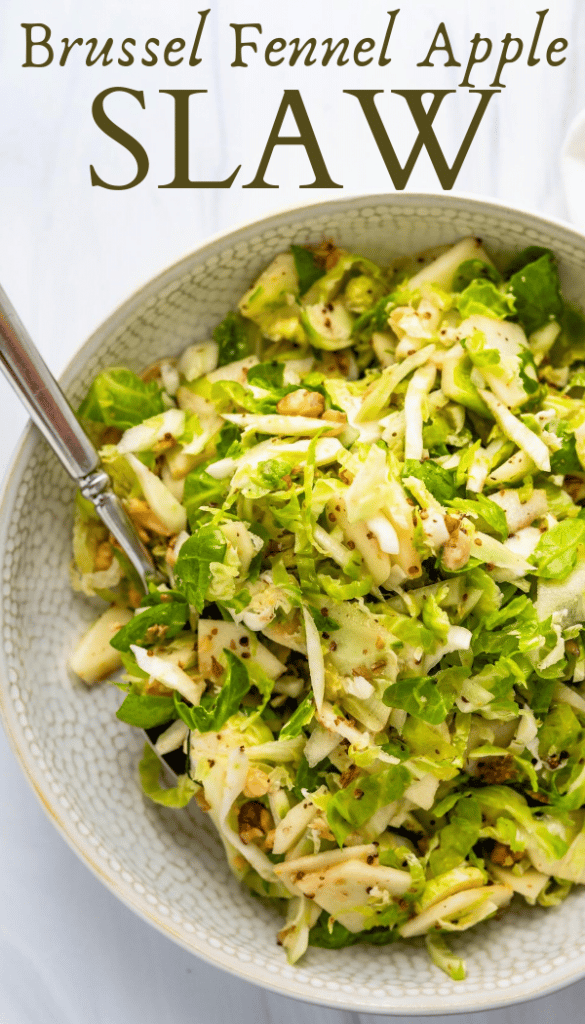