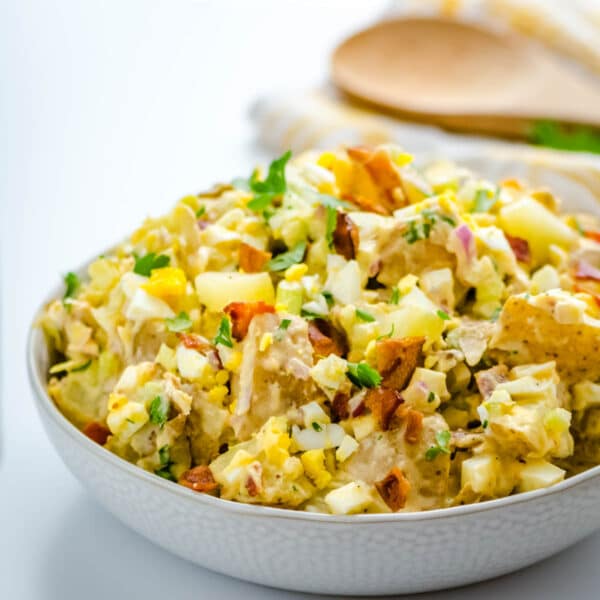 If you love a loaded potato salad with bacon and eggs, this old fashioned potato salad recipe is  one of the best. Made with Yukon gold potatoes tossed with a tangy dijon mustard and mayonnaise dressing, brimming with crunchy bits of celery and onion, this easy bacon and egg potato salad has all the good things you love.

There is a huge difference between the classic old fashioned potato salad that Mom used to make and the sad, goopy wannabes sold in every supermarket deli across the country. One is brimming with flavor and texture, while the other is just a flavorless homogenous mass.

In case you missed my tone, I’m a big fan of the homemade variety.

This loaded potato salad recipe strikes the perfect balance of tangy and creamy, with identifiable chunks of tender potato.

In other words, it’s perfect.

It’s also jammed with extras, so you’re never missing out on the good stuff (like bacon and eggs) with every bite.

I prefer Yukon Gold potatoes for making potato salad. They have just the right amount of starch and don’t break down as easily when you’re tossing them with the mayonnaise based potato salad dressing.

Red waxy potatoes don’t have enough potato flavor and the dressing doesn’t cling as readily while russets are too starchy and tend to fall apart when they’re mixed with other ingredients.

Choose Yukon gold potatoes that are about 3-5” in length. (No need to peel them).

Slice the spuds in half lengthwise, then lay the flat side on the cutting board and cut in half again lengthwise. Then cut horizontally into pieces about 1-2” wide. You want the potatoes to be chunky enough to be identifiable, but not so big they can’t be eaten in one bite.

Add the potatoes to boiling, salted water and cook until tender, but not falling apart. Transfer cooked potatoes to a large bowl with a kitchen spider (to drain off as much liquid as possible)

Hard boil the eggs in the same pot of boiling water as the potato salad to save on time and  dishes.

How long to boil potatoes for potato salad?

When the potatoes are cut into uniformly bite-sized chunks they cook very quickly, generally 10-12 minutes.

You can tell when the potatoes are ready by stabbing a chunk in the center with a sharp paring knife. If the potato slips easily off the knife on its own, it’s done. If it doesn’t, it needs more time.

The secret to the best old fashioned potato salad

The problem with most potato salads is that they’re very bland and one-note… the key is to add a splash of vinegar to the hot potatoes immediately after you’ve drained away the water.

In this case, I use red wine vinegar. Just a little bit sprinkled over the hot tubers will soak into the flesh and add a perfect tangy-sour note to balance the mayonnaise-y potato salad dressing.

Do not skip this step, it’s critical.

Bacon is one of the best parts of my loaded potato salad recipe. I use about 1/2 pound of thick-cut applewood smoked bacon, consequently, you’ll get a bit of smoky bacon in just about every bite. I’ve found that even people who don’t usually eat potato salad like this recipe because they can really taste the bacon in it.

Cook and crisp the bacon. You can fry it up in a skillet or bake it in the oven (instructions given in the recipe card.)

A good old fashioned potato salad should have onion and celery in the mix. They add flavor and a good crunch to the blend.

When chopping the celery and onion, remember you don’t want big chunks of either one in the potato salad recipe. Instead, cut them into a 1/4” dice.

They should be small enough to cling to the potato pieces and provide each bite with a little crunch.

Celery has a mild flavor and scallions aren’t overpowering, however red onion can be quite pungent. My remedy for onions with a very strong stinging flavor and aroma is to soak them for 10 minutes in ice water.

The water neutralizes some of the sting and keeps the onions very crisp. Drain the soaked onions in a fine mesh sieve and pat them dry with a paper towel to prevent them from making the potato salad dressing too watery.

This extra step is well worth it if you don’t like the harshness usually associated with raw onion.

While the red onions are draining, mix together the homemade dressing for potato salad. It’s quite simple to make with just a little mayonnaise, dijon mustard, kosher salt, pepper and smoked paprika.

Do not dress the potato salad with the dressing until the potatoes have cooled to room temperature.

To assemble the loaded potato salad Combine the chopped celery, onion and scallions with the dressing and mix very well. Pour the mayonnaise dressing over the cooled spuds and add crumbled bacon, parsley and chopped hard boiled eggs. Use a large rubber spatula to gently fold the ingredients together until well combined.

Don’t stir the potato salad too aggressively, otherwise the tubers can beak apart.

In a word, it’s perfect. The potato flavor is there, but it’s backed up with the smokiness of the applewood bacon and soft, but firm eggs.

This loaded potato salad isn’t too mayonnaise-y. It’s perfectly balanced against the creamy dressing thanks to the red wine vinegar.

We love the crunchy bits of celery and red onion (that doesn’t have that eye-stinging quality).

Can I make the potato salad ahead of time?

Yes! This loaded potato salad can be made up to two days ahead of time. For the best results, reserve the crispy bacon to add just before serving.

How long is potato salad good for?

This recipe lasts for up to 5 days when stored tightly covered in the refrigerator. If any liquids from the vegetables leak out during refrigeration, just give the potato salad and old fashioned stir to redistribute.

How long can potato salad with mayonnaise dressing stay out at room temperature?

According to the FDA’s website, items with eggs, mayonnaise, and dairy can be out for up to 2 hours at room temperature (one hour if it’s more than 90°F). If you’re serving this loaded potato salad for a summer cookout, I’d recommend keeping it on ice in a cooler until serving — or just keeping the salads and slaws in the cooler at all times and tell the guests where to find it.

Do you have any potato salad recipes without mayonnaise?

Yes! Try this light, herbal Southern French potato salad. It skips the mayonnaise for a tangy wine and dijon dressing.

What to serve with loaded potato salad with bacon and eggs:

Other side summer salads you’ll love: 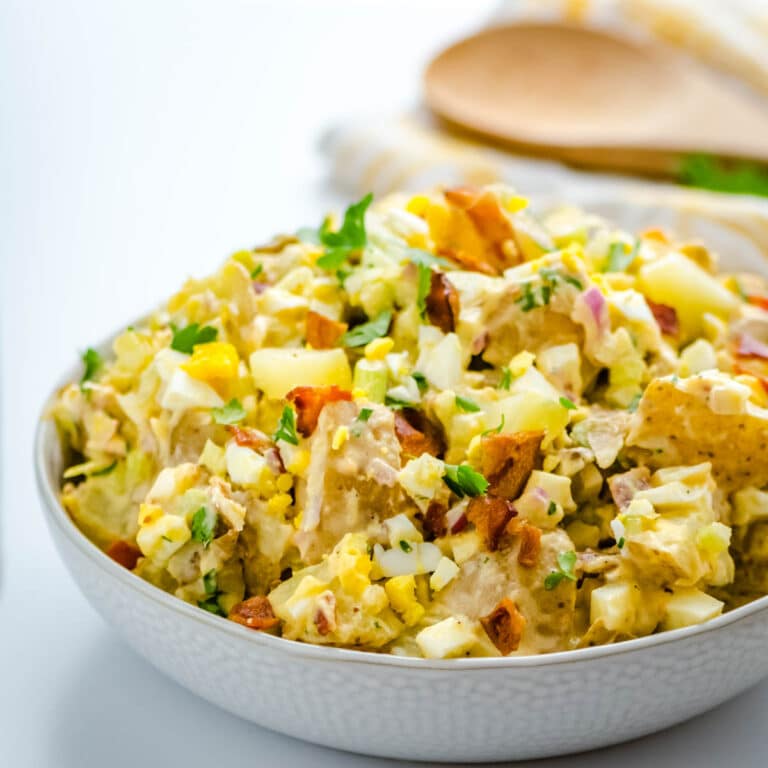