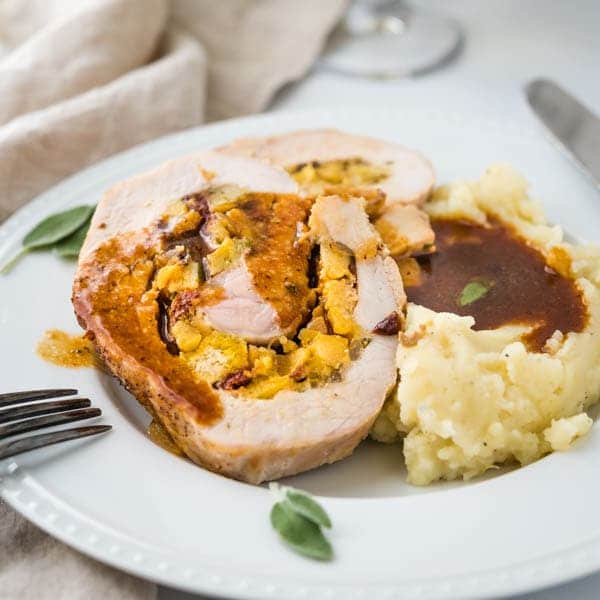 There are two components to this rolled pork loin. The cherry apple stuffing and the butterflied pork loin roast. Both are simple to make and you can prepare the stuffing several days ahead of time.

You can even roll and tie the cherry apple stuffed pork loin earlier in the day and just pop it in the oven to cook about an hour before you want to eat.

This is a simple apple stuffing recipe and it makes just enough to fill the rolled pork loin with ample stuffing in every bite.

Make sure you start with several day old bread or prep the day before by cutting the bread into small pieces and letting it dry out overnight. If the bread is too soft, the stuffing can get mushy (ewww).

Pork loin is a naturally lean cut of meat, but it will come with a bit of a fat cap and silver skin, which need to be trimmed before rolling. To do this you’ll need a very sharp knife with a pointy tip – a boning knife is good for this.

How to trim pork loin roast

Since this is a stuffed roast pork loin, I like to butterfly the roast myself. It’s easy to do and once you’ve done it a few times, you’ll be a pro too.

What if the pork loin is already tied when you buy it?

Sometimes you’ll find pork loin roasts that are tied by the butcher.

Tied pork roasts are not butterflied, but rather, it’s the smaller, flatter end piece that are split and folded over to look like a bigger, fuller pork roast.

There’s nothing wrong with them and you can use them in this recipe, but you’ll likely have some leftover stuffing and you can skip the whole butterflying method, because it won’t work if your roast has already been cut.

How to butterfly a pork loin

Check out this video on how to butterfly a pork roast for more clarification.

What if I poked a hole in the side when butterflying?

If you’ve inadvertently sliced through the side wall of the meat (it happens) — then that’s the end that you’ll roll up first. Why? Because the first portion of the pork will be on the INSIDE of the rolled pork, and will cover up the mistake. You’re welcome!

I use a high heat roasting method for this cherry apple stuffed pork loin. It sears the outside of the meat fast, cooks the inside to a perfect, moist, tender doneness, renders the reserved fat and adds a rich caramelization to the onions that line the pan.

Since we’re roasting at a very high heat (500° F), you should have a clean oven, otherwise any stuck on foods or previous grease splatters will smoke.

How to tell if it’s done.

Use a good instant read thermometer to tell when the pork roast reaches the optimum internal temperature of 135° – 140°.

Note: the pork continues to cook as it rests (known as residual cooking), which is why I pull it out 5-10 degrees before it’s reached the food safe temperature of 145° recommended by the USDA.

I recommend the ThermoWorks Thermapen Mk4 instant read thermometer. It’s well calibrated, has a backlight for outdoor grilling at night, it’s intuitive without any buttons or special instructions and gives accurate readings in seconds. It’s not cheap, but is well worth it to me. I believe so strongly in this product that I’m an affiliate for them.

Do I have to strain the gravy?

No. If you like onion and bits of fond in your gravy, you can skip the straining.

Personally, the caramelized onions and charred bits are my favorite part, so I usually skip straining, but if you’re having company, you might want a more polished look.

How thick should I slice the roast?

We like to slice the stuffed roast pork loin into 1/2 to 3/4″ slices, that way you get a nice swirl of stuffing in each serving.

Can I assemble the pork loin with stuffing ahead of time?

Yes. You can assemble the roast up to a day ahead of time, cover and refrigerate. When you’re ready to cook it, remove the roast from the refrigerator about 30 minutes before you put it into the oven so it can come closer to room temperature before cooking.

How do I reheat leftovers?

Preheat the oven to 300° and slice the pork roast into 1/2″ to 3/4″ slices. Line a baking sheet with aluminum foil and spray with vegetable spray. Arrange the pork on the foil and lightly cover with another sheet of foil. Rewarm the pork for 10-15 minutes or until hot. Serve with any leftover gravy.

Can I freeze leftover pork?

Yes. Wrap the pork well in freezer paper and freeze for up to 4-6 weeks. Defrost fully before reheating.

Can I substitute dried cranberries for the cherries?

Yes, that would make it very festive for Christmas.

Though there’s quite a few steps to making pork loin with stuffing, none of them are particularly difficult and you can spread out the process over days if you like. That makes this special treat perfectly suited for holidays and entertaining.

What my tasters said

“Love the apples and cherries in the stuffing.”

“The gravy is good enough to drink.”

What to serve with stuffed roast pork loin:

FOR THE PORK ROAST:

FOR THE STUFFED PORK LOIN ROAST: