Everyone has their own Super Bowl traditions, ours is to make and serve game fare that celebrates the two teams that made it all the way to the National Championship.  I showcased the Carolina Panthers on Monday and now it’s Denver’s turn! 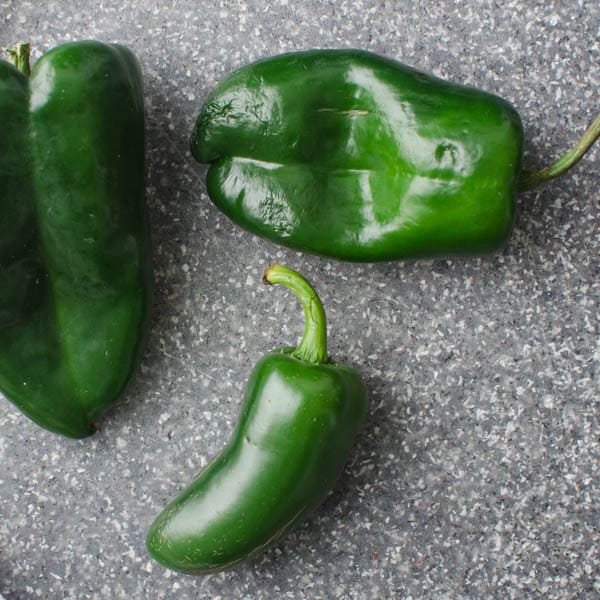 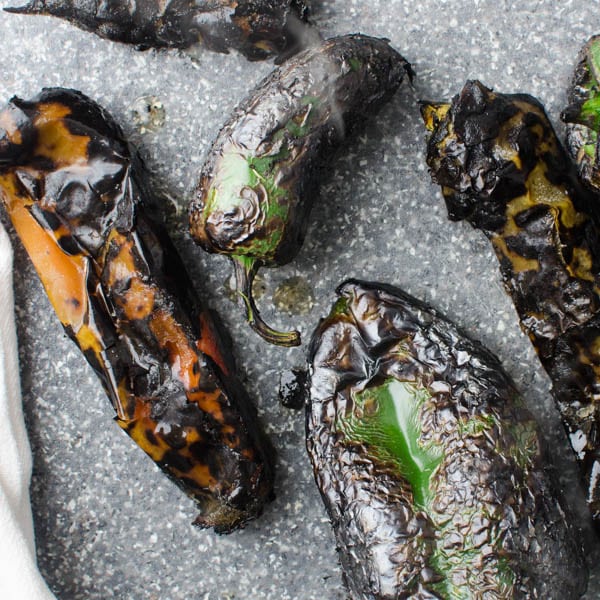 I thought long and hard about foods that (to me) are quintessential Denver.   I conferred with several websites — and my good friend and former Denver resident, Nola.  Chili was the overall favorite, but stupid me, I posted that recipe two weeks ago.  I wasn’t thinking!  Next up were spicy Southwestern dishes, like enchiladas, or tacos three ways – also good options, but I’d done them before.  We settled on buffalo. 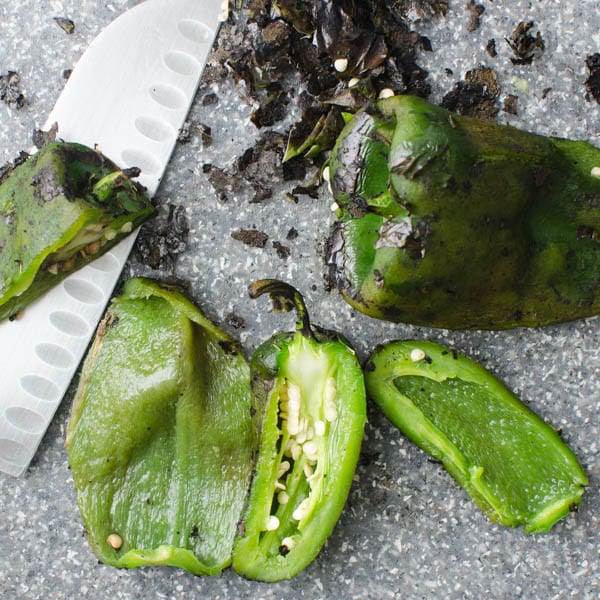 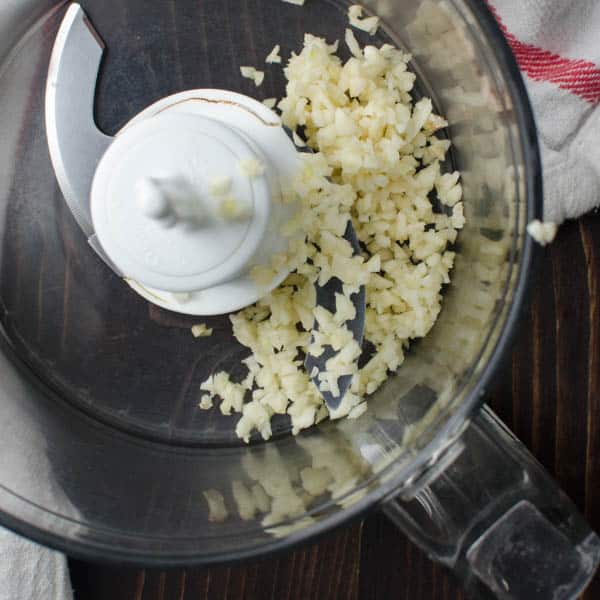 When I say buffalo – I don’t mean some knock off of chicken wings from the northeast.  I mean buffalo as in “Home, Home On The Range”.  Buffalo as in bison.  Naturally grass-fed, lean, tender, delicious.  This meat doesn’t require a lot of handling or cooking to yield juicy, Oh-ma-Gawd, eyes-rolling-back in your head sliders.  You’re welcome. 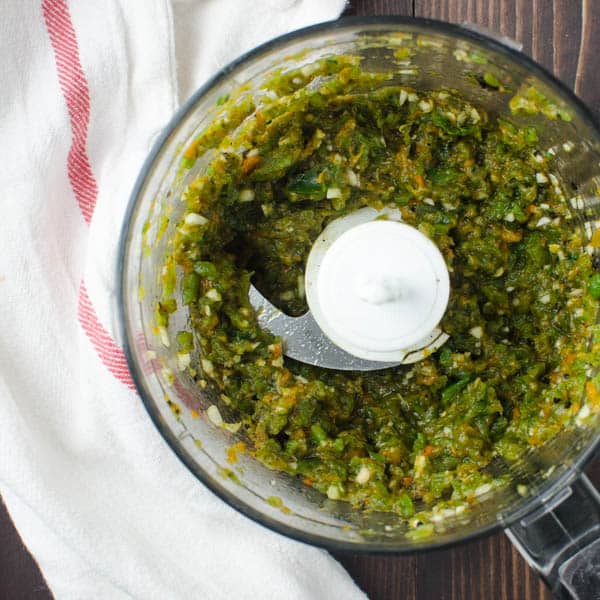 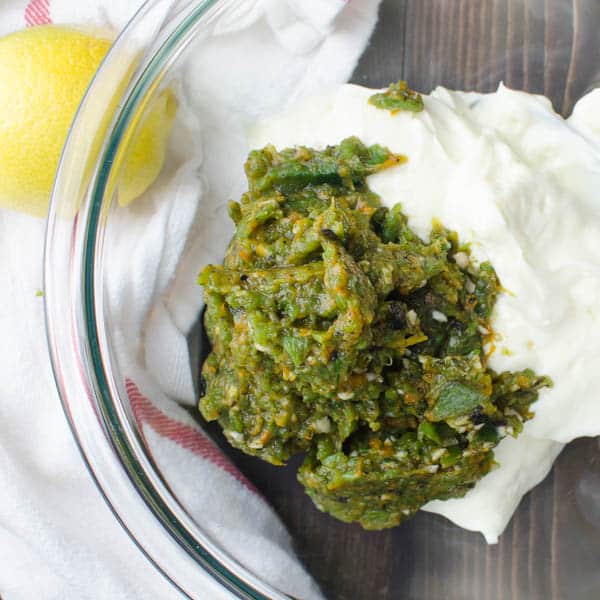 To make these sliders extra spicy and extra special I topped them with a garlicky blackened chili aioli!  To blacken the chilies, roast them over an open flame (like your grill or gas cooktop) or just roast them in a hot oven.  When the chilies have cooled peel off the skins and remove the seeds, then plop them in your mini prep food processor along with the garlic.  Mix that blend with some mayonnaise and lemon and refrigerate until the burgers are done.  With three types of roasted chili peppers, this aioli has a tingly kick you’ll want to spread on everything. 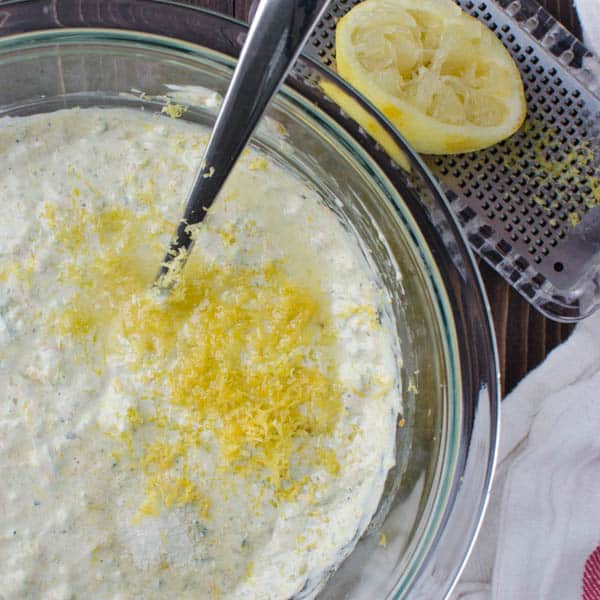 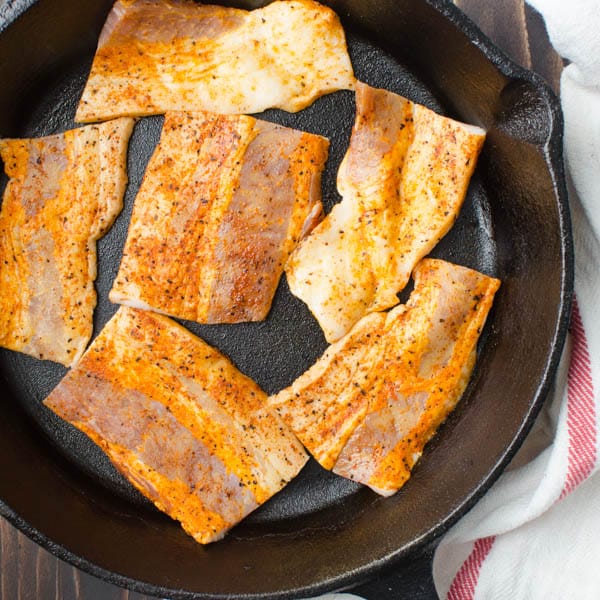 Scott (strongly) suggested that we add bacon to these burgers.  Surprise, surprise.  And not just any bacon – house cured bacon from M.E.A.T, a local burger joint that specializes in over-the-top burgers and even-more-outrageous sides.  Of course, you can use any bacon you like, but I would recommend a thick sliced variety.  (Side note: Scott has been talking big smack about curing and smoking his own bacon — so stay tuned!) 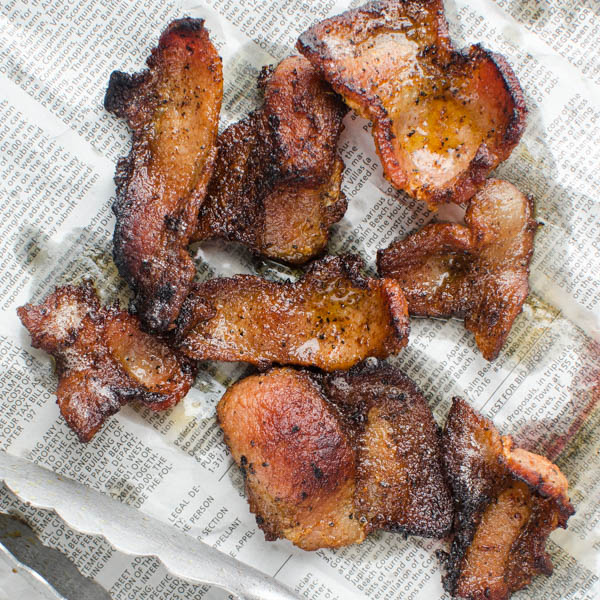 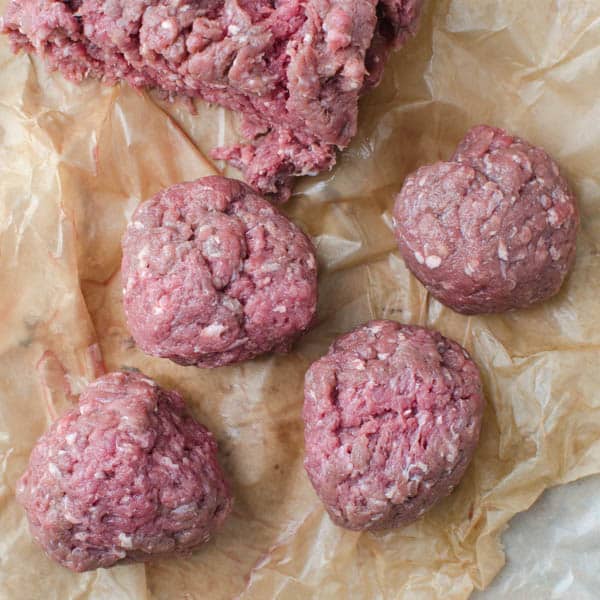 Slice the bacon into pieces to fit the slider (about 2-3″ long) and crisp it in a cast-iron skillet.  Cool the bacon on a platter lined with paper towels or newspaper, then make the burgers by  rolling the bison into meatballs.  The meatballs go in the same skillet you cooked the bacon in. 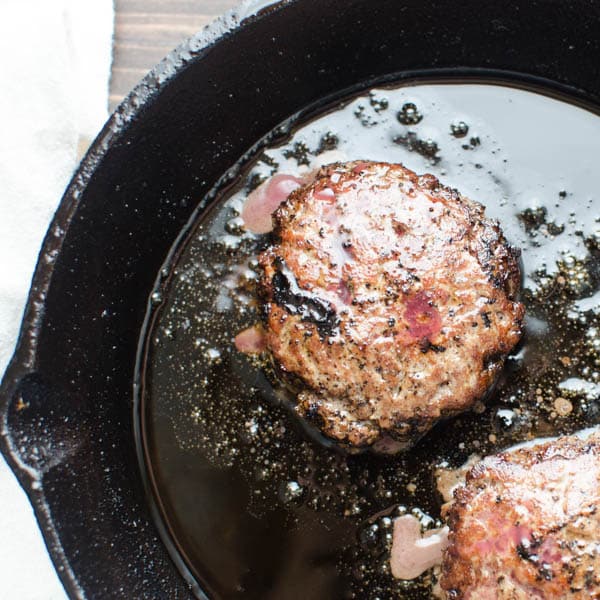 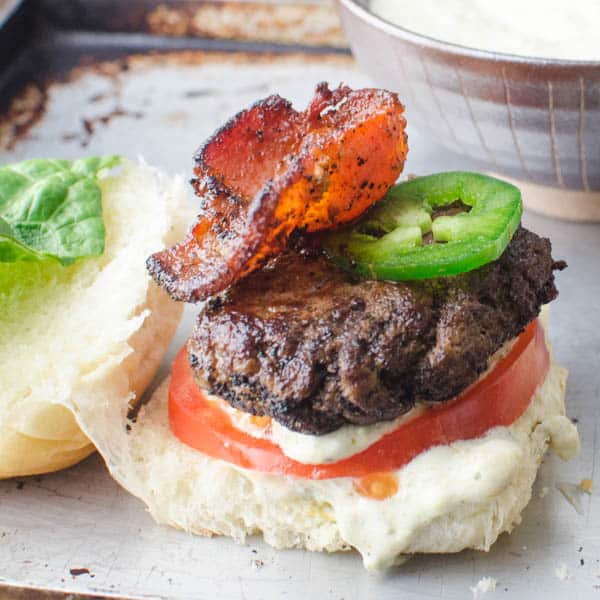 Yes, I said skillet.  Normally, we would grill our burgers, but for this recipe, I wanted the crusty sear that only a cast iron skillet can give – if you don’t have one — get one.  They’re inexpensive and cook evenly without hotspots.   Trust me, they weren’t your grandmother’s cooking-vessel of choice for no reason.

Anyway, place the meatballs in the skillet and use a sturdy flat surface, like a spatula to press the meatball into a patty, this gives them that craggy, uneven, made-in-a-diner look.  Sear on both sides and begin to build your sliders with plenty of bacon, cheese and that oozy-hot chili-aioli.  And enjoy the game! 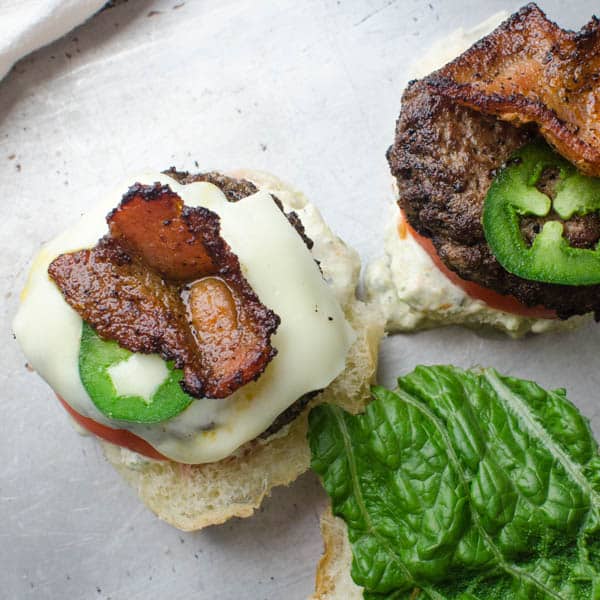 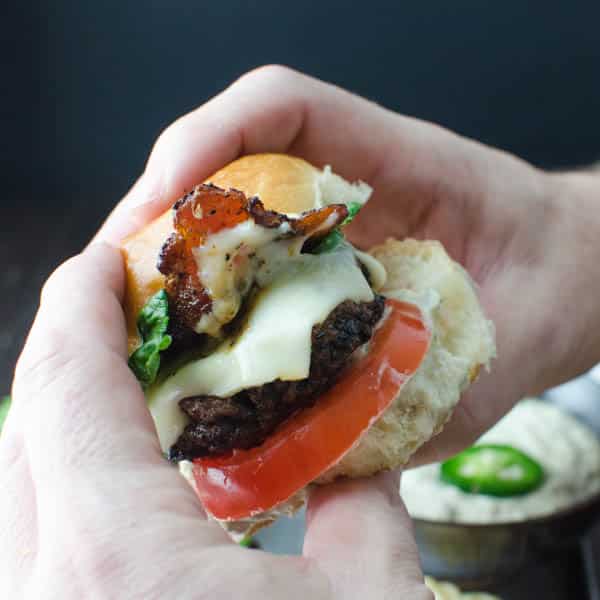 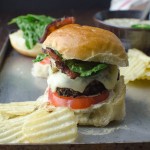 If you have a gas stovetop, you can place the peppers directly over the flame to char them.
If you don't have a grill or gas stove, preheat the oven to 400 degrees, place peppers on a sheet pan and cook until, blackened on the outside, about 20-30 minutes, then proceed with the recipe. 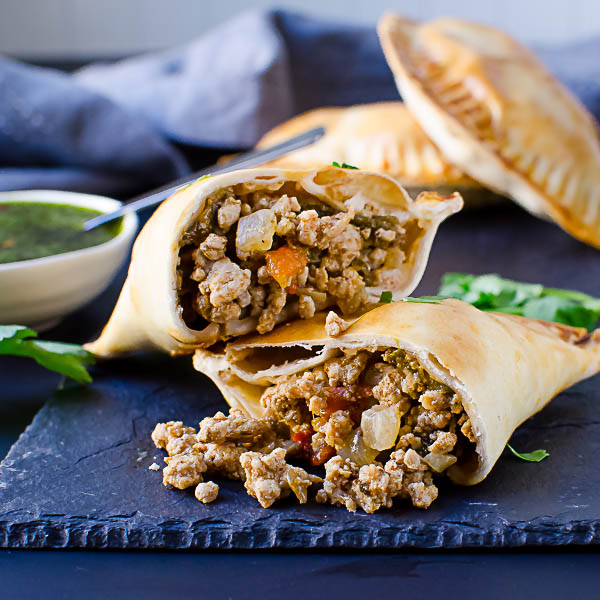