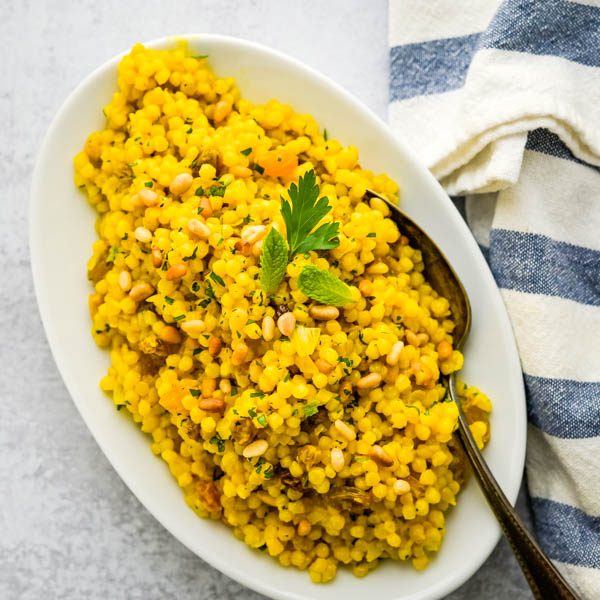 Looking for tasty, healthy couscous recipes that the whole family will enjoy? This turmeric couscous is one of our favorites. Scented with a cinnamon stick and of course, turmeric seasoning, this pearl couscous recipe comes together quickly in one pan and the flavors and textures are outstanding. We add golden raisins and toasted pine nuts for sweetness and crunch. Trust me, you’ll love it alongside your weeknight rotisserie chicken.

Is couscous pasta or a whole grain?

Traditional couscous may resemble tiny whole grains, but it’s actually semolina flour with a bit of water that’s rubbed together with hands until it resembles fine grains. That style of couscous is usually steamed with aromatics and served with other vegetables and proteins.

Pearl couscous is actually wheat flour pasta that’s formed into tiny balls, then toasted. It’s a kissing cousin of Israeli couscous and quite delicious. At my market it’s sold in large plastic cannisters labeled Pearl Couscous and parenthetically sub-labled Israeli-Style Couscous. Read more about the misunderstanding in the history of couscous here.

This healthy couscous recipe is one of my favorites because the flavors are such a delicious departure from the usual buttered pasta side dish. With healthy golden turmeric, a back note of cinnamon, fresh herbs and pops of sweetness and crunch, it’s healthier than those packaged couscous sides with the “flavor packets” and there’s nothing artificial.

3. Season the pearl couscous recipe with turmeric and stir until the pasta has taken on a golden hue.

See how the turmeric seasoning gives the pearl couscous and shallots a beautiful marigold color? There’s also a subtle aroma that’s noticeable as the turmeric is warmed through. It’s infinitely better than a boxed mix.

5. Reduce heat to a simmer and cover with a tight fitting lid, stirring occasionally so the pearl couscous doesn’t stick to the bottom of the pan. The couscous will start to absorb the broth and plump.

6. About two-thirds way through cooking, stir in the golden raisins and continue to cook until the raisins are plumped and pearl couscous has absorbed most of the liquid and becomes tender.

7. Move the from the heat and discard the cinnamon stick

8. Stir in the fresh parsley, mint and toasted pine nuts and serve.

Compared to what? It’s not a protein-packed grain like quinoa and because it’s actually pasta, it’s mostly refined carbohydrates, so if you’re adhering to a low-carb plan, this turmeric couscous probably isn’t for you. However, this dish isn’t nearly as fat and calorie-laden as many pasta dishes, so I wouldn’t categorize it as a bad food, either. You can read more about couscous’ health benefits here.

Try serving this golden couscous with: 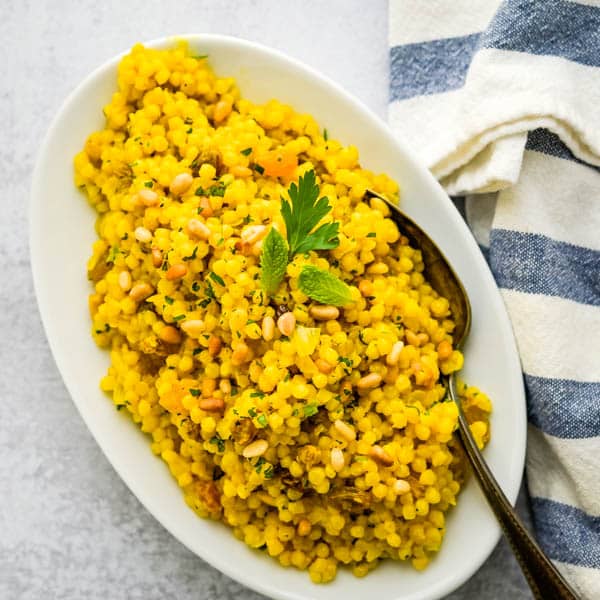