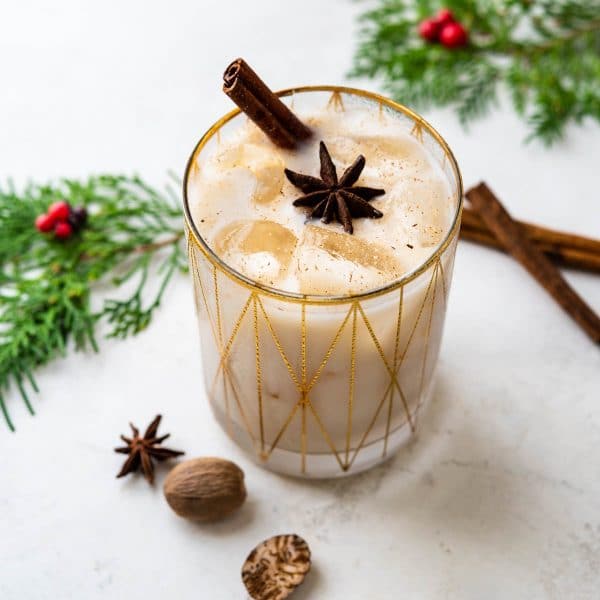 Milk Punch
Milk punch is a tasty, creamy, milk based cocktail made with brandy, bourbon or cognac. Serve strained in a pretty coupe glass or make a pitcher and serve over ice for a crowd. It's perfect for the holidays and makes a great brunch drink.
Total: 5 minutes
JUMP TO RECIPE PRINT RECIPE
Home | Recipes | Recipes By Skill Level | Beginner Recipes | Milk Punch Recipe

Milk punch is a creamy, brandy spiked cocktail that’s sweet, luscious and very easy to sip. This version of milk punch uses a holiday spiced simple syrup that adds a new layer of flavor to the classic brunch cocktail. You’ll love this modern take on the original milk punch recipe.

Whoever heard of milk punch?

Even if you’ve never heard of this unusual drink, you should know that it’s been around for CENTURIES.

First documented in a 16th century travelogue of the Scottish isle of Iona, the earliest written recipe was found in a 1711 cookbook.

Benjamin Franklin made a clarified milk punch made of hot milk, lemon and brandy.

In the 1838 Queen Victoria issued a royal warrant authorizing Nathaniel Whisson to display signage as “purveyors of milk punch to Her Majesty”, in a modern day equivalent of celebrity endorsement.

Read all about the origins of milk punch in this article by the Charleston Academy of Domestic Pursuits.

What you’ll need for this milk punch recipe:

How to make this holiday and brunch cocktail

What is milk punch?

Traditional Milk punch is a cocktail made with spirits (usually brandy or bourbon), milk, sugar and vanilla and it can be made two ways, clarified or creamy.

Clarified milk punch involves adding lemon, tea and spirits to milk. The acids react with the casein proteins in the milk and create curds. Double straining away the curds eliminates the milky, cloudiness in a technique known as “milk washing“. The resulting drink is clear and nothing like what it started out as. Don’t believe me? Check out this video to see how it’s done.

The creamy version of milk punch is something altogether different than the clarified version. It’s kind of like an eggnog minus the egg, but lighter and (IMO) way more sippable and less cloying. Typically made with brandy or bourbon, sweetened with sugar or simple syrup and a dash of vanilla for richness, it’s a tasty cocktail that’s perfect for brunch and especially nice during the holidays.

Got a crowd? Make a big batch.

If you’re having a group of people for, say, Christmas or New Year’s morning and you want to have something beyond the standard mimosa, milk punch is the answer. And yes… you can make a big batch in advance, though it’s served slightly differently.

When should I serve/drink the cocktail?

I’ve heard this question A LOT. Milk punch is a very versatile cocktail.

Can I make a batch of this tipple ahead of time?

Yes. See the instructions in the recipe card for a pitcher of punch. Instead of shaking each drink in a cocktail shaker, I recommend chilling the pitcher of milk punch until very cold and serving it in an ice filled old fashioned glass for sipping.

As long as you don’t add the ice directly to the pitcher, it will keep for several days in the refrigerator. 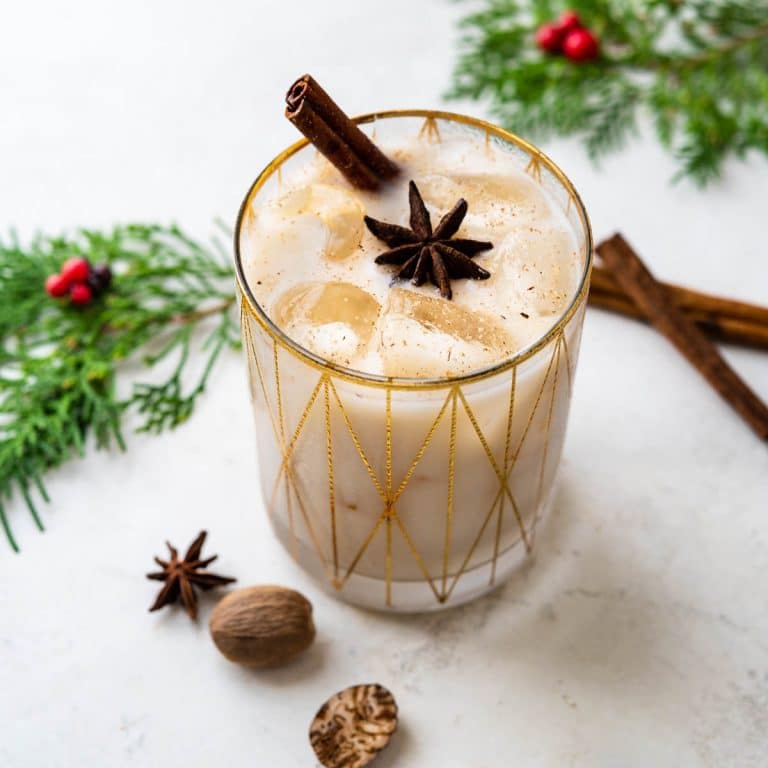 FOR A SINGLE MILK PUNCH:

FOR A PITCHER OF MILK PUNCH:

FOR A SINGLE MILK PUNCH COCKTAIL:

FOR A PITCHER OF MILK PUNCH: