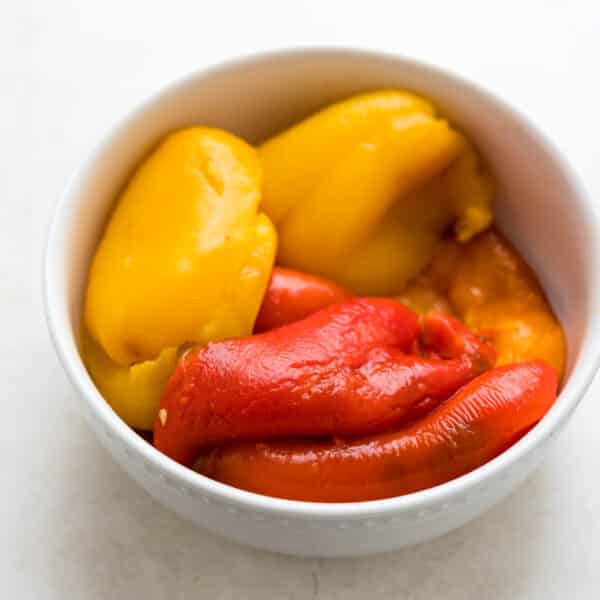 Want to know how to make roasted red peppers at home in your oven? It’s really easy to do and you can make roasted bell peppers ahead of time to use whenever you need them. Follow these simple step by step instructions.

What are roasted bell peppers?

Using roasted vs. fresh in recipes yield very different results. There’s a place for each, but when a recipe calls for roasted bell peppers, specifically, there’s no substitute.

Why you should roast your own bell peppers at home:

When a recipe calls for roasted bell peppers, do you fork out $2.50 for a small jar of them?

There’s a better (and cheaper) way. I’ll show you how to make roasted bell peppers at home for a fraction of the cost and it’s SO MUCH EASIER than you think.

Paying good money for something you can do yourself (quickly and easily) is a pet peeve of mine. Especially when it comes to kitchen staples.

I wrote about it in this post for simple syrup, which requires two ingredients. For these roasted bell peppers — you only need ONE.

Not to mention that roasting bell peppers is ridiculously easy to do. You can make as much or as little as you want at a time and they can be cooked in advance. So you’ll always have sweet roasted bell peppers at the ready.

I recommend using only the yellow, orange or red bell peppers, not the green. Green peppers have a strong taste that’s not sweet and shouldn’t be swapped in place of roasted sweet peppers. I usually buy sweet peppers in bulk, 6 at a time from Costco.

What temperature to roast bell peppers?

I like to roast peppers at 400°F. This will allow the peppers to soften, and mellow, while charring the skins. It usually takes 30-40 minutes in the oven at this temperature, however, 400° is not a hard and fast rule. You can do it at 375° for a little longer, or 450° for about 25 minutes.

It’s more important to look for the main visual cues:

A charred puffed skin that pulls away from the flesh of the pepper.

How to roast bell peppers the easy way:

Once the sweet red bell peppers are roasted and the flesh is tender, you could, theoretically, peel the skins right off of them. Except they are 400°F when removed from the oven. Consequently, that would burn the tips of your fingers and you’d write a nasty-gram to me saying, “why didn’t you warn me not to touch the hot peppers?”

Obviously, you don’t want to be handling 400° produce with your bare hands, so this next step gives them a chance to cool while also loosening the skins.

Steaming the skins of the roasted bell peppers

To peel the peppers, just hold a loose piece of the skin and give it a tug. The papery skins, lift from the flesh, easy peasy. See photo below.

You don’t even need a knife to remove the stems and seeds from the roasted peppers.

I like to do this on a cutting board that has a well around the rim to catch the juices, because once split, the roasted sweet peppers have a lot of juice and will leak considerably.

How long will roasted red peppers last in the refrigerator?

You can keep them in a covered in an airtight container for a week or more.

Is there a way to prolong their shelf life further?

Yes. Drain the peppers well and transfer to a jar with a screw on lid. Fill with a neutral oil or light olive oil, just to cover the top of the peppers. Seal the jar and refrigerate. They’ll keep for up to 2-3 weeks.

Can I freeze roasted red peppers?

Yes. To do this, I recommend lining a pan with parchment paper and arranging the peeled and deseeded peppers on the parchment so they don’t touch. Freeze the peppers until they’re solid, then transfer to a zip top bag, so you can reach in and pull out just what you need, when you need it.

Recipes that use roasted bell peppers:

How To Make Roasted Bell Peppers