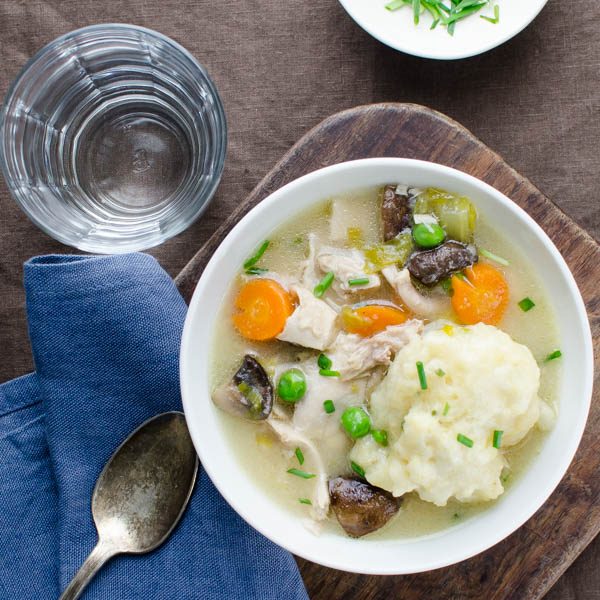 I’ve never really thought about the origins of chicken and dumplings — they’ve just been a staple on our table since I was a little girl.  Chunks of chicken and vegetables in a savory broth with big, fluffy dumplings floating on top.  Heaven!  The dumplings of my youth came together in about 30 seconds, thanks to a package of Bisquick or Jiffy baking mix.  These Chicken n’ Cornmeal-Chive Dumplings take a few seconds longer.

I was surprised to find that Scott had never had chicken and dumplings until he met me.  And he had no idea why I was putting a biscuit on top of the soup.  I guess it’s a Southern thing.  But it made me curious because I thought everybody ate this.  Where do chicken and dumplings come from?  There is substantial debate over its origins and frankly, so many iterations of this dish, that I don’t think there’s a pat answer about their evolution.

The one that makes the most sense to me is the dish, with those fluffy biscuit-style dumplings, originated in the South, possibly during the Great Depression.  Adding the dumplings was a way to stretch the chicken to make the meal go farther.

There are other “rolled” dumplings, which look suspiciously noodle-like to me and I’m told are very popular in the North.  I’m sure they’re good too, but I’m partial to this variety.

Of course the key to a tender dumpling, is to bring your pot of stew to a bubbling simmer, then drop the dumpling dough into the broth by rounded tablespoons before covering it tightly with the lid and letting the dough steam and puff.  Don’t sneak a peak to see how they’re doing, otherwise the dumplings will be tough (at least that’s what my Mom told me).  When it’s cold outside, there’s nothing so hearty and satisfying as big pot of this savory stew. 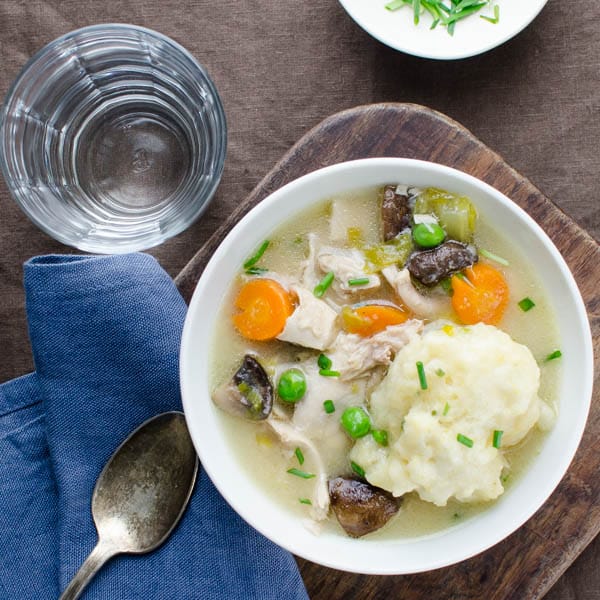