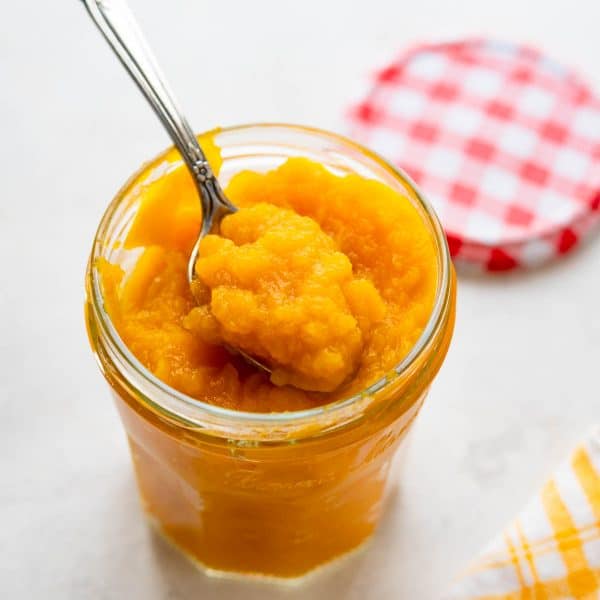 Have you ever seen those small sugar pumpkins at the market and wondered if you could make homemade pumpkin puree from scratch? You can. And it’s easier than you think! Learn how to roast a pumpkin and puree the flesh for use in homemade pies, baked goods, soups and more. It’s so easy to do, you can’t even call this pumpkin puree, a recipe.

From mid-September and into November is high pumpkin season. So, if you’ve been thinking about cooking with pumpkin, this is the time to do it.

There are literally hundreds of different types of pumpkins, squashes and gourds (and only a few aren’t recommended for human consumption).

First, let’s debunk what’s actually in a can of pumpkin puree. It ain’t pumpkin. It’s squash. And for most recipes, it’s a fine substitute for making your own from scratch in a pinch.

However, if you’re feeling a little more adventurous, cooking a pumpkin (and pureeing it) is super easy to do.

Which pumpkin to use for making puree from scratch?

With so many varieties of pumpkins, gourds and squash available, how do you know which one to choose to make puree? Let’s look at the ones you’re probably most familiar with.

Giant Pumpkins – Some pumpkins can grow to behemoth sizes, weighing well more than 200 pounds and measuring more than 70 inches around the middle. One variety, known as Big Max pumpkins, has a semi-sweet,mild flesh that you can use for lots of dishes.

The downside, aside from the obvious portability problems (how do you heave that into the back of your SUV?), is that it yields an unholy amount of pumpkin. Seriously… even pumpkin bread devotees would be overwhelmed by the sheer quantity.

Besides the main claim to fame for these behemoths is pure bragging rights in pumpkin growing competitions.

Smaller Pumpkins – A more diminutive variety are Jack Be Little Pumpkins, which are edible, but are so small, that they hardly seem worth the effort for the amount of pumpkin puree you’ll get.

This variety of petite gourd is primarily ornamental. (I put a pile of them in a large bowl for my dining room table as a lazy nod to fall decorating).

The Goldilocks of pumpkins for cooking? Sugar Pumpkins.

Sugar pumpkins (a.k.a. pie pumpkins, baby pams and spooky) are the ones I recommend for making homemade pumpkin puree. Why? Because like baby bear’s chair, porridge and bed they’re just right…

Not too big, not too small, in other words — manageable.

One sugar pumpkin can weigh between 3-4 pounds which makes about 3-4 cups of homemade pumpkin puree. A perfectly reasonable amount.

This is less of a “recipe” and more of a method. So the ingredient list is short. Like one-ingredient short.

How to roast a pumpkin

There’s really nothing to roasting a sugar pumpkin (or any pumpkin for that matter). It’s a matter of cutting the pumpkin, scooping the seeds (cause you’re gonna want to get rid of the innards) and cooking it in a hot oven. Easy peasy.

I recommend lining a baking sheet with parchment paper (or you can use tin foil, sprayed with a little vegetable spray) just so it doesn’t stick to the pan and make a mess.

Cooking time will depend on the size of your sugar pumpkin, but since most are in the 3-4 pound range, it’s usually about 40 minutes, give or take a few.

Cues for knowing when your pumpkin is cooked

A well roasted pumpkin will yield considerably at the slightest touch. In the image above, I literally poked my finger (and it’s not a particularly strong, “Wonder Woman” finger) into the side of the roasted sugar pumpkin and it immediately caved, like a bully when you stand up to them.

Even more notable, when I reached for the stem to turn the roasted pumpkin over and scoop the flesh, the entire skin shrugged off by itself (see photo below).

How to make pumpkin puree from scratch

Is there really a difference between homemade pumpkin puree and canned?

One of the major things, that’s quite apparent, is the color of the freshly made sugar pumpkin puree. It’s lighter and brighter than the Libby’s canned variety and the smell isn’t as forward and musky. The flavor is fresher as well, without that tin-can aftertaste, though the puree still tastes like pumpkin.

Using homemade pumpkin puree instead of canned will naturally give your pies and baked goods a lighter color, but the overall taste is similar.

Look, I’m not saying that there’s anything wrong with using canned pumpkin puree. In fact, I usually have a can in my pantry at all times (for pumpkin bread emergencies), but if you’re curious, it’s worth a try and the effort is truly minimal.

Can I use other types of pumpkins or squash to make puree?


Absolutely. You can do this with any type of edible squash, pumpkin or gourd. I recommend looking for a fruit that’s in the 3-5 pound range, so it’s worth your while, but not an overwhelming amount of puree.

How long will pumpkin puree last in the refrigerator?

Stored in an airtight container, it should last for 5 days, maybe a little longer.

Can I freeze the puree?

Yes. I recommend measuring out the puree into amounts that you’ll normally use for a recipe and freezing it in plastic freezer bags or even in ice cube trays. (If using ice cube trays, after the puree is frozen transfer the cubes to a zip top freezer bag… then you can use just what you need, whenever you need it.) 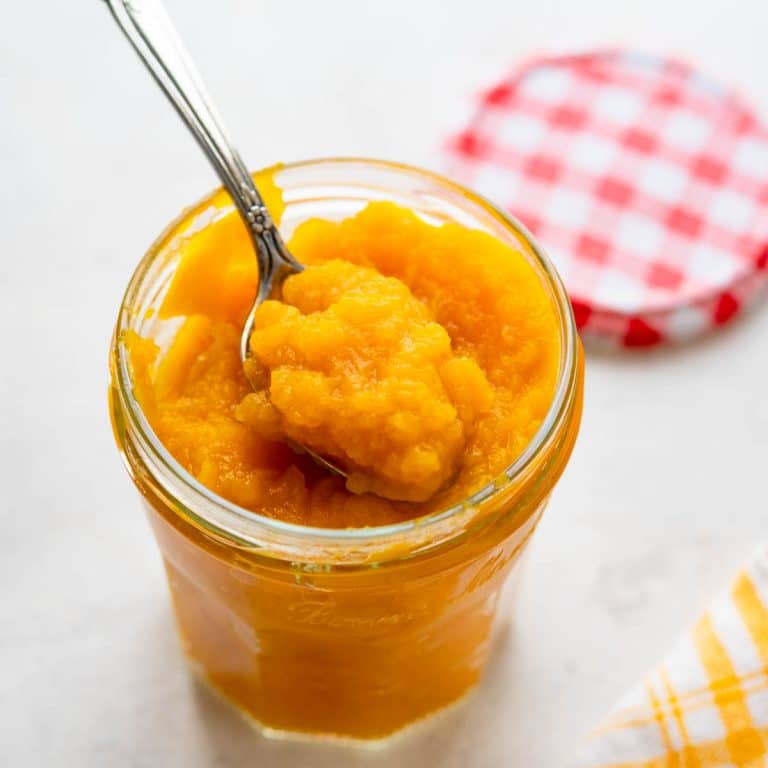 How to make homemade pumpkin purée.