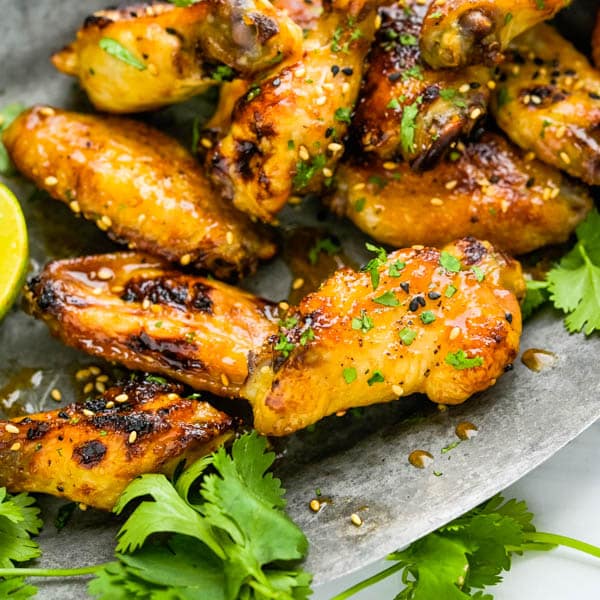 Looking for the best wings for your next movie night or game day? These Asian style honey sriracha chicken wings are amazing! They’re tangy, sweet, spicy, meaty, juicy, and just sticky enough that you’ll want to lick your fingers afterwards. The secret is the simple soy, lime, honey sriracha sauce, which gets brushed on the baked wings towards the end of cooking. Save some sauce for drizzling or dipping your sriracha honey wings into. So good!

I don’t like to fry wings at home… it’s the mess — and how the “fry smell” can linger in the house for days on end. Instead, I leave the frying to the restaurants and make baked chicken wings at home. It’s easier, less messy and if you cook them at a high enough heat, you’ll end up with a nice, crispy skin that’s just begging for some sticky honey sriracha sauce.

Prepping and baking the chicken wings

This first bit of cooking starts to firm up the skin and cook the wing meat. It’s not until after that first 15 minutes that you add the honey sriracha sauce. If you sauce the wings too early, the sriracha honey wings could burn, while never achieving that crispy stage. So while the wings  are on the first bake, assemble the tangy honey sriracha sauce.

Though a relatively short list of ingredients, each one is potent and powerful in this funky, tangy, spicy sauce.

Taste map for your tongue

Though the original taste map of your tongue  you may have learned about in school has been debunked,  the 5 basic taste receptors (salty, sweet, sour, bitter and umami) are alive and well in Asian cuisine, which is famous for simultaneously triggering them all at once.

You can see in the photos (above and below) how the skin starts to crisp and the color changes from a pale yellow to a burnished, crispy amber. That’s how you know it’s getting GOOD. Also, check out the tin foil beneath the wire rack that collects the honey sriracha sauce, saving you a lot of scrubbing time later. You’re welcome.

Lacquer Asian-style wings under the broiler

Flip the wings one last time and brush them again with the lip-smacking tangy honey sriracha sauce. For the last bit of cooking, put the honey sriracha wings under the broiler for just a minute or two to fuse the sauce to the chicken and give the wings a deeper color.

It’s completely up to you, but after you pile them on a serving platter, you might want to add a little garnish for color, freshness and pizzazz. Here’s what I recommend.

Extras for the best wings

So, how do they taste?

In a word… Amazing.  The chicken is cooked to crispy, meaty perfection, but the real “wow” is definitely the tangy honey sriracha sauce. Every part of your tongue dances with that first bite.  These wings are crispy, too.  They’re not sad, flabby, meh wings.  No.  They are crusty and tender and utterly satisfying. Lordy… mere words don’t do justice…

Can we eat now?

As I was making (and photographing) this recipe, my husband, Scott, kept popping in and out of the kitchen asking, “Are you done yet? Can we eat?” Poor guy hasn’t had a hot meal in 6 years… but I digress… He inhaled this batch and declared them the best wings, ever! He loved the punchy flavors in these honey sriracha wings and this platter didn’t last long between the two of us. Be sure to have a supply of napkins or wet-naps on hand! You’ll need ’em.

Recipe can be doubled or tripled.
You can also grill the wings instead of baking them (I’ve done it both ways – just wait until the wings are almost cooked before glazing them with the sauce, to prevent flare ups