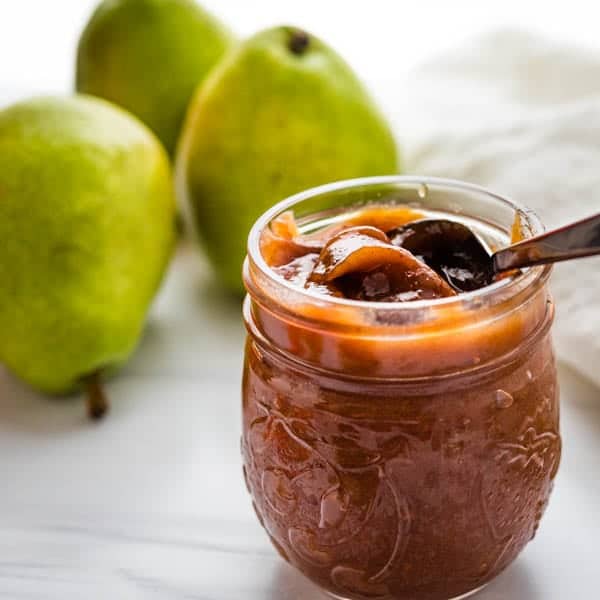 This post was sponsored by Nature Nate’s Honey Co. All opinions are my own.

Want a rich pear butter recipe that’s flavored with ginger, seasonal fall spices and has no refined sugar? This easy fruit butter spread is the one. The only sweetener in this simple spiced pear butter is 100% pure raw and unfiltered honey. It’s thick, creamy and delicious on morning toast and biscuits.

Life is sweeter with honey, don’t you think? I do. Which is why I wanted to share my favorite brand, Nature Nate’s, with you. I like it swirled in yogurt and my morning oatmeal as well as an afternoon cup of tea — and it’s amazing in this spiced honey pear butter recipe.

What is fruit butter?

A fruit butter is a spread, like a jam or jelly, however, it has no added pectin and thickens by slowly cooking off the excess liquids until it’s become a concentrated fruit spread. Typical fruit butters are smooth and creamy and can be lightly or heavily spiced. Most are made with sugar, but my pear butter recipe uses 100% raw and unfiltered honey from Nature Nate’s.

I was first introduced to Nature Nate’s Honey a few years ago when I attended the Fancy Foods Show in NYC. I learned that Nature Nate’s Honey Co. is the number-one branded honey company in the U.S. and producer of 100% pure, raw & unfiltered honey… then I tasted it… and was SOLD.

The flavor is complex and nuanced because they work with the best bee keepers to get the best honey for their proprietary blends. It’s deep, rich, balanced and sweet. You can taste the difference. That’s why I use it in this lovely fall pear butter recipe. The flavor of the honey accentuates the perfumed pears and heady fall spices for a delicious breakfast spread.

You’ll want to try Nature Nate’s not only for their superior product but because they have strict testing standards to ensure every bottle is as simple & pure as it is straight from the hive.

Making this pear butter (or any fruit butter) only requires 3 simple steps.

To cut the initial simmering time, I used my pressure cooker, but you can also simmer the pears on the stovetop until they’re soft and fragrant.

When the fruit is soft and fragrant, use an immersion blender, food processor or regular blender to puree the pears with their spiced honey liquid.

Note: Be sure to remove the whole cinnamon stick and star anise before blending.

Transfer the pear puree to a heavy pot (I like to use a dutch oven) and bring to a low simmer. Cover the pot with the lid slightly askew and simmer for 45 minutes to an hour (depending on how much liquid has been given off by the fruit).

If you’re a fan of fall spices and flavors, this heady, fragrant spread is for you. The Nature’s Nate Raw & Unfiltered Honey sweetens the pears without being cloying and adds further depth and complexity to the spice blend. Add a dollop of this fruit spread to your morning muffin for a real treat.

A message from Nature Nate’s:

At Nature Nate’s, we share the many blessings that we’ve been given by working to support families and helping communities across the US and beyond.

Our business is driven by more than the bottom line — we measure success not just by what we achieve, but also by what we contribute.

This is why Honey Gives Hope is so important to us. It’s a philosophy that we put into practice every day and a way of giving back that is as pure, raw and unfiltered as our honey.

Visit your favorite retailer, and look for the orange bottle or ask for Nature Nate’s.

FOR THE DUTCH OVEN/STOVETOP METHOD:

FOR THE INSTANT POT: