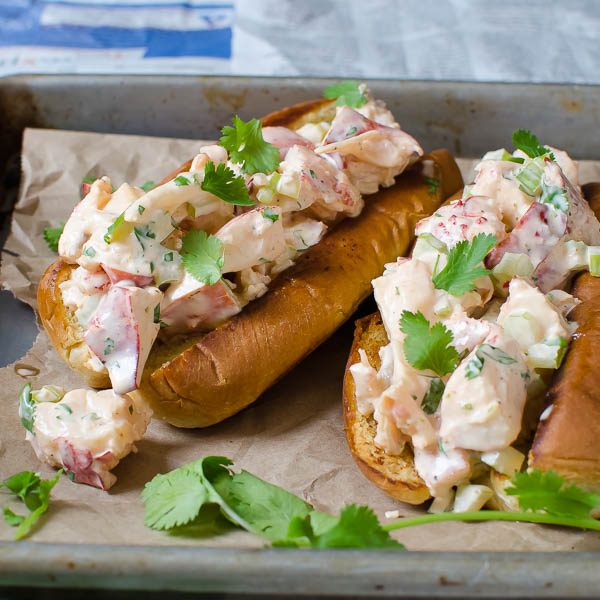 Want a twist on a lobster roll sandwich? Sriracha Lobster Rolls take the authentic lobster roll recipe to a new high! With instructions on how to cook a live lobster and mix up a spicier New England roll.

Raise your hand if you’ve ever bought (or caught) a live lobster and cooked it yourself.  It’s not something you do everyday, right?  First,  they’re cost prohibitive  (that’s why I saved them for a special occasion – Happy 4th of July!)  Second, if you’re the squeamish sort, there’s that whole “cooked alive“ thing which can be off-putting for some.  I grew up cooking bushels of live blue crabs in a big pot over a propane burner every summer, so I’m less sentimental than some.  My daughter, on the other hand, had made friends with the crustaceans between the time we left the market and arrived home.  She was horrified at having to  choose which one went into the pot first, but the promise of Sriracha Lobster Rolls eased her guilt.  A little.

She set the lobsters on the counter, while I readied the pot with a steamer basket.  My pot was only large enough for one lobster at a time and so when I removed the first steaming, bright red crustacean and set it on the cutting board, the other lobster either saw it or smelled it and put up quite a tussle, spreading its claws wide and flapping its little legs wildly.  Em felt really bad for him.

Sriracha Lobster Rolls Are On The Horizon…

When the drama had faded, I got down to picking the meat.  I used sharp kitchen sheers to slice through the tail and pull out the meat in one large chunk.  I struggled a bit with the claws because my crackers weren’t tough enough for the shells, but eventually I scavenged every bit of meat from the lobsters — and saved the shells for stock.

Let’s just take a moment to bask in all that glorious lobster meat!  This is seriously decadent – but I figured summer is THE TIME for New England style lobster rolls and what better way to celebrate the 4th, right?!!

After wrestling to get the meat out of the shells, the rest of the prep was a snap!  A quick chop of celery, a touch of mayonnaise, some lime zest & juice, cilantro and a good hit of sriracha sauce.  If you’re not into spice, you can skip it and go more traditional, but we covet heat in this house…

Add the lobster to the spicy Sriracha sauce and fold it in.  Cover and refrigerate until you’re ready to serve.

To build the New England rolls, DO NOT use plain white bread.  Do not get fancy with a multi-grain ciabatta.  Don’t even think about a french baguette.  A top-split potato roll, brushed  inside and out with melted butter, then lightly browned (preferably in a cast iron skillet) is the only way to go.  I repeat — THE ONLY WAY TO GO!  Buttery and lightly crisped, but soft enough to soak up the dressing – this is the perfect (and only acceptable) conduit for transporting the lobster from your plate to your mouth!

I may be biased, but I believe the best way to enjoy these luxurious lobster salad sandwiches is sitting poolside, in your bathing suit with kettle chips and an ice cold beer.  Enjoy and have a safe and relaxing 4th of July! 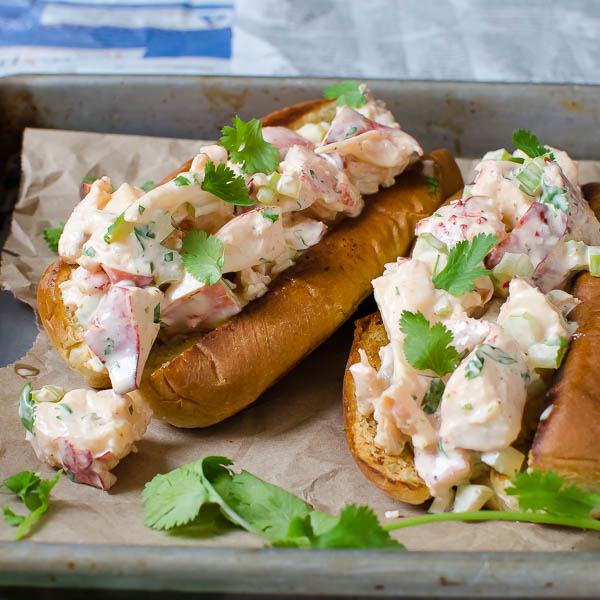