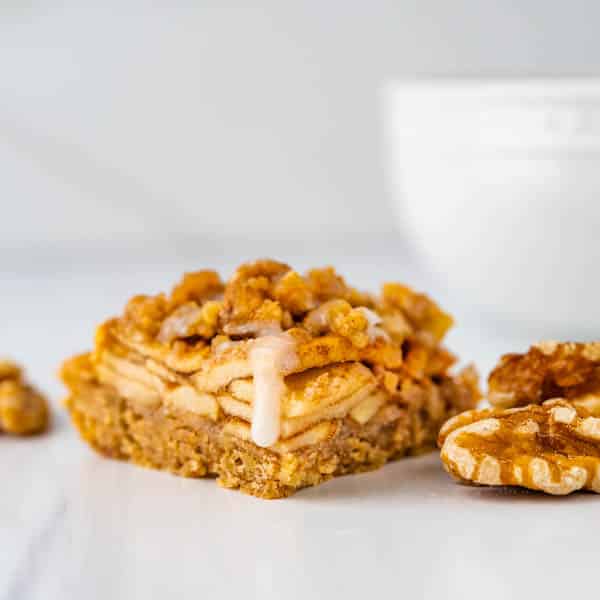 Cinnamon Walnut Apple Bars are a quick and easy, spiced fall apple dessert with a nutty spiced oatmeal streusel topping and simple glaze that’s irresistible.  These apple crumble bars are buttery, nutty and lightly sweet. Make a batch of apple squares for an afternoon pick me up. 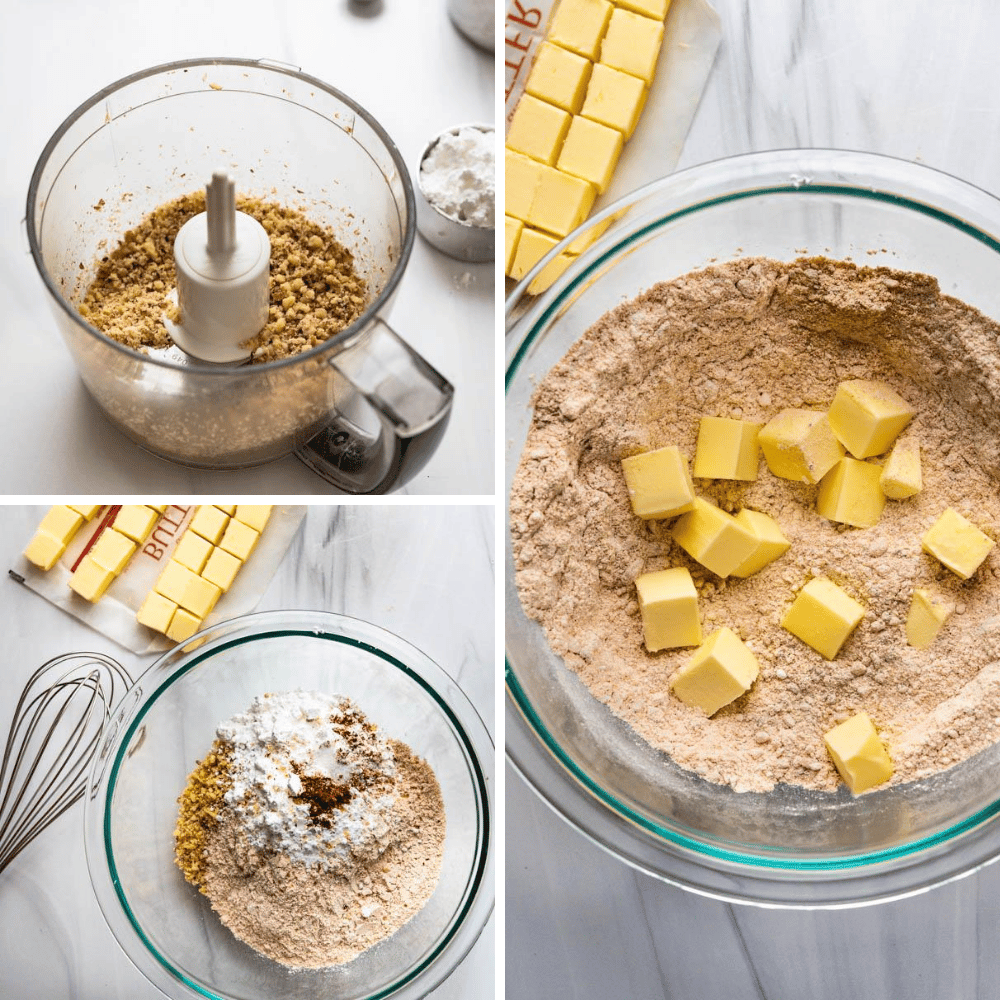 These apple bars have 4 layers of cinnamon spiced goodness. They’re easy to assemble and will make your whole house smell like fall. Happily, they only take about 30 minutes of hands-on time to assemble.

Ingredients for the pastry crust: 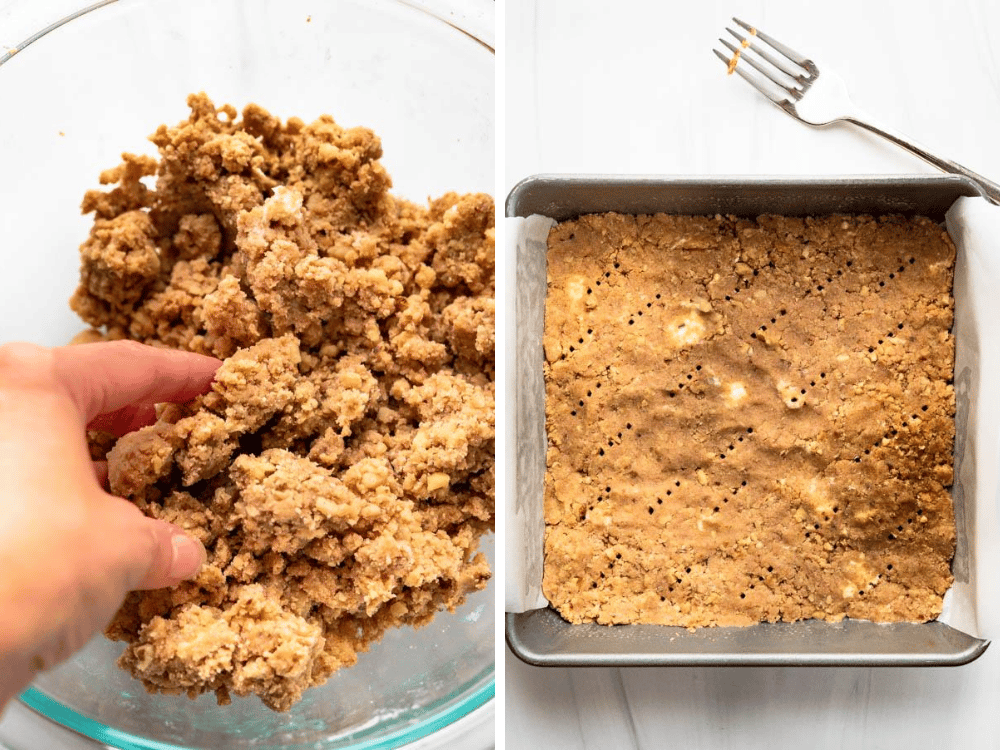 One of things to differentiate these apple squares from others is the wholesome nuttiness from whole wheat flour in the crust AND oatmeal streusel topping. Yes, if you’ve only got AP flour on hand, you can use it instead, but the whole wheat gives the apple bars a deeper, more complex flavor that we really like.

How to make cinnamon walnut crust: 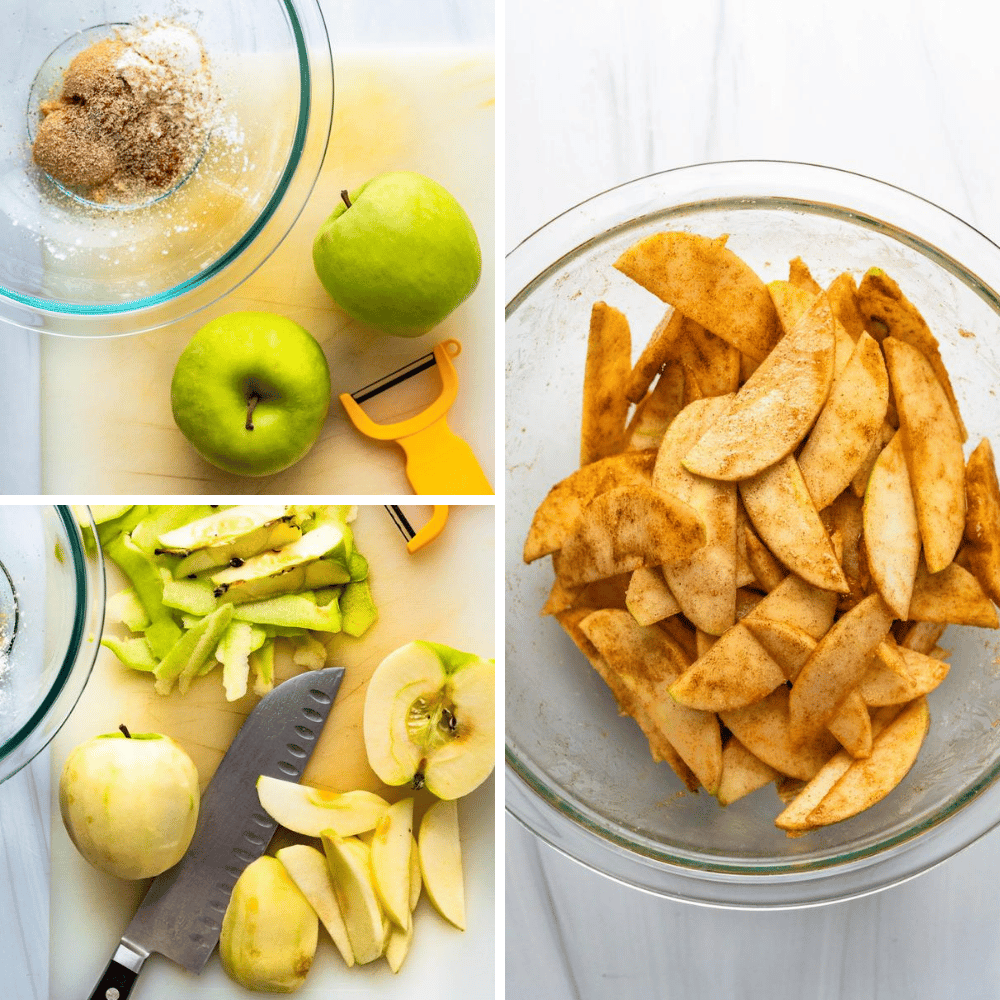 How to make fruit filling for apple bars: 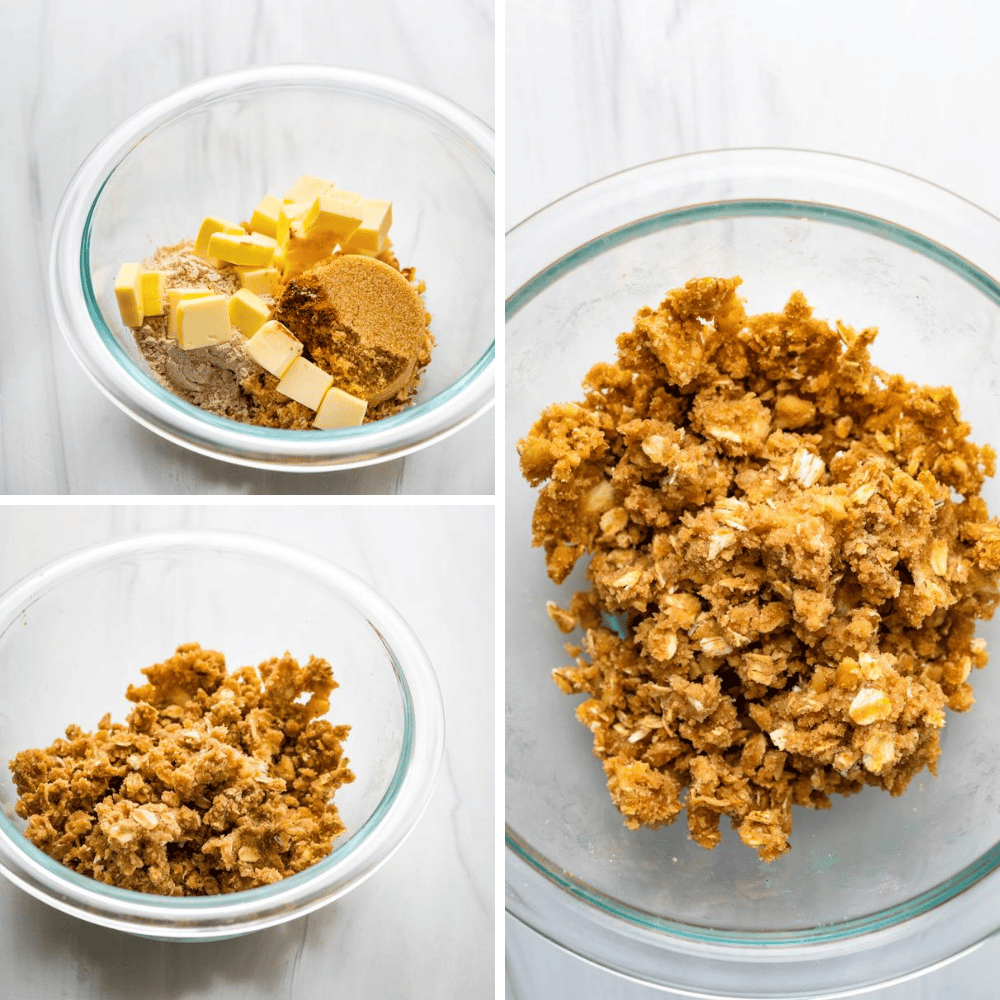 The walnut and oatmeal streusel topping is similar to the whole wheat pastry crust, but uses brown sugar instead of powdered for a sweeter streusel-y cinnamon walnut topping. The oatmeal adds extra texture. As with the crust, you can substitute AP flour for the whole wheat, or use a combination of the two.

You’ll pretty much use the same method to combine the walnut oatmeal streusel as you did for the crust earlier with the notable exception of leaving out the chopped walnuts until the other ingredients are mixed. The reason being that the walnuts in the streusel topping are not finely chopped and bigger chunks of walnuts would make it more difficult to mix the other ingredients cohesively. Toss them in at the end. 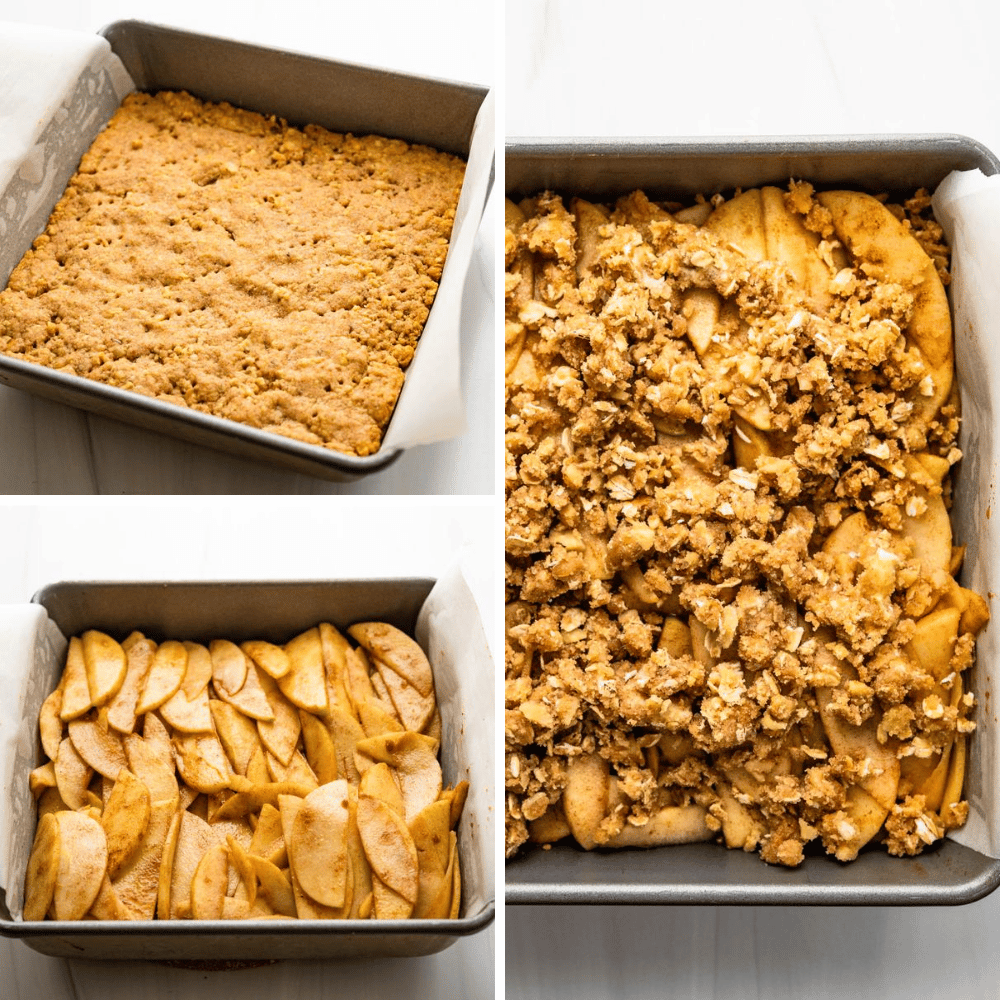 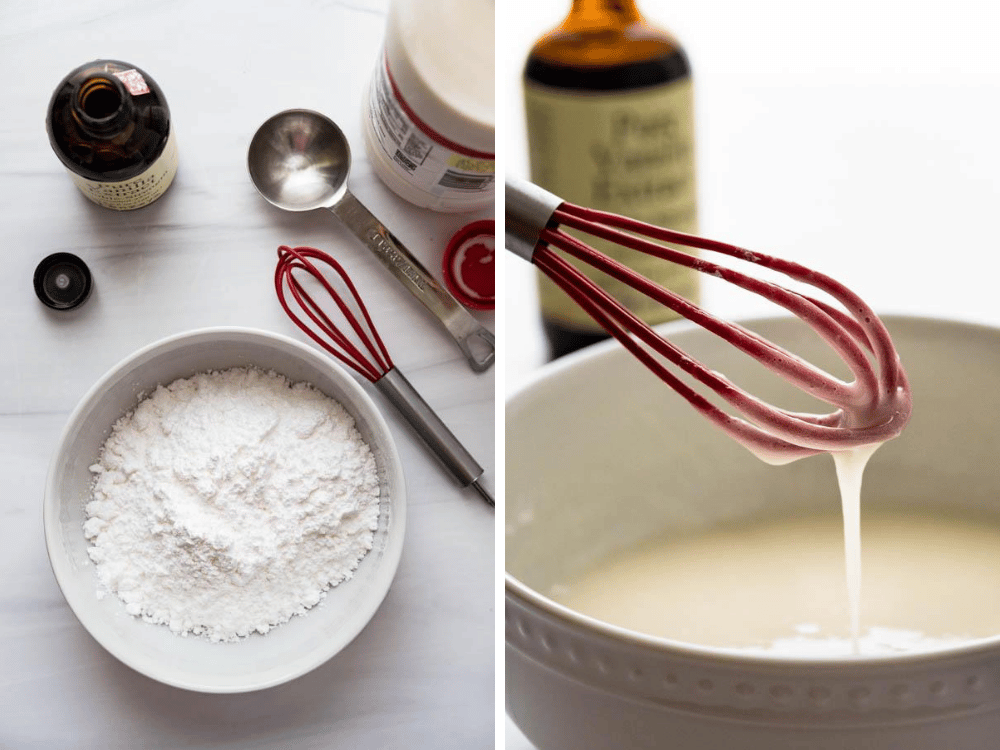 The glaze for these apple walnut bars is optional, but it adds a creamy sweetness to the bars that my tasters loved, plus it comes together in under 5 minutes, so there’s really no excuse not to do it, right? Besides, withholding a drizzle of glaze is like skipping the garland on a Christmas tree. It’ll still be fine, but deep down, you know something’s missing.

You can slice these bars in as little as 9 squares or up to 16, which is what I’ve set this recipe to for servings sizes. Obviously, if you cut the bars into larger pieces, there’s more calories etc. in each one… 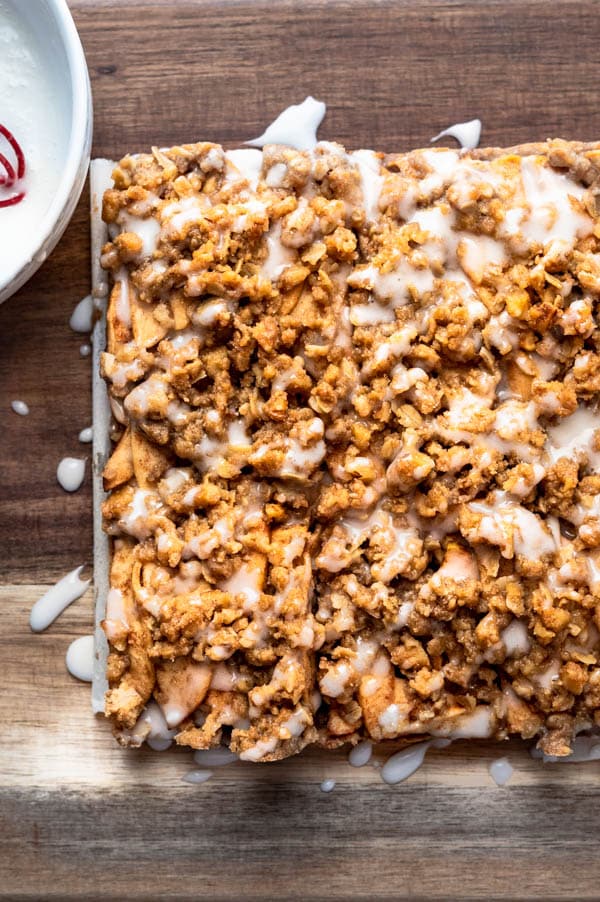 Apples are the official fruit of fall

For me, apples are the quintessential fall flavor. I know a lot of folks are stuck on pumpkin, but it can’t compete with the tart sweet complexity of apples tossed with cinnamon spice and sugar. An avalanche of oatmeal walnut streusel and shimmer of sweet glaze only add to the temptation. Apple bars will make your whole house smell warm and cozy as they bake and I guarantee that like the Pied Piper, they’ll beckon the rest of the family to the kitchen when they get a whiff. 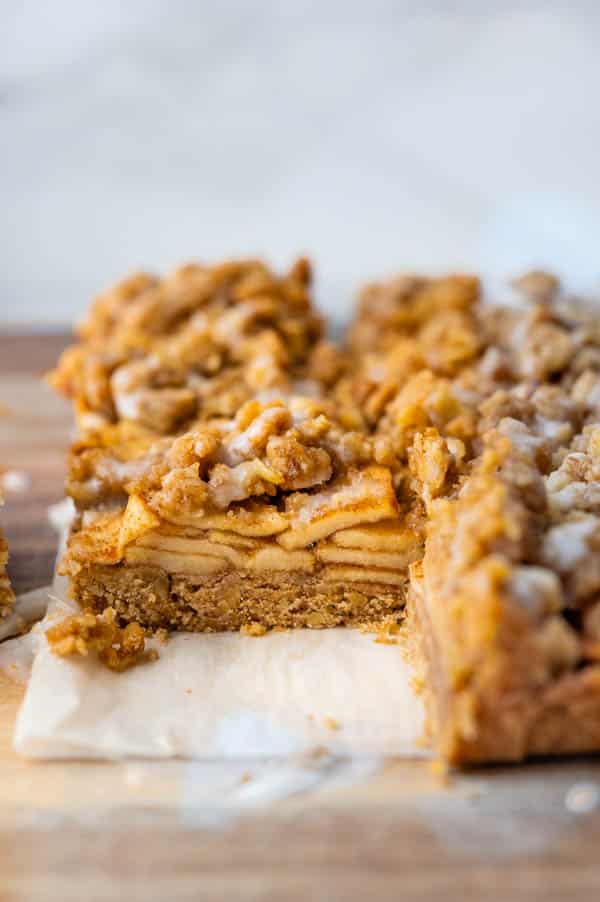 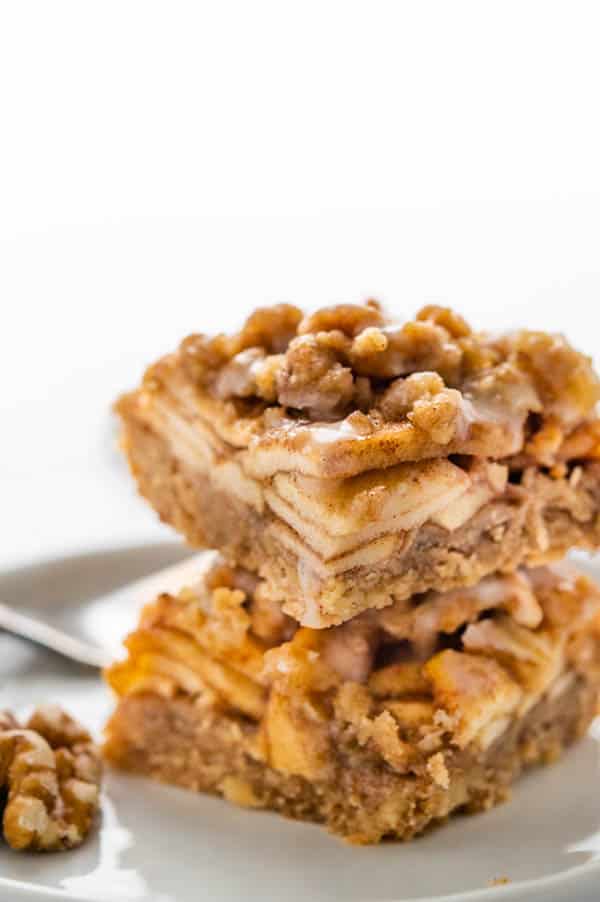 FOR THE WHOLE WHEAT WALNUT PASTRY:

FOR THE APPLE FILLING:

FOR THE APPLE FILLING:

FOR THE WALNUT STREUSEL: 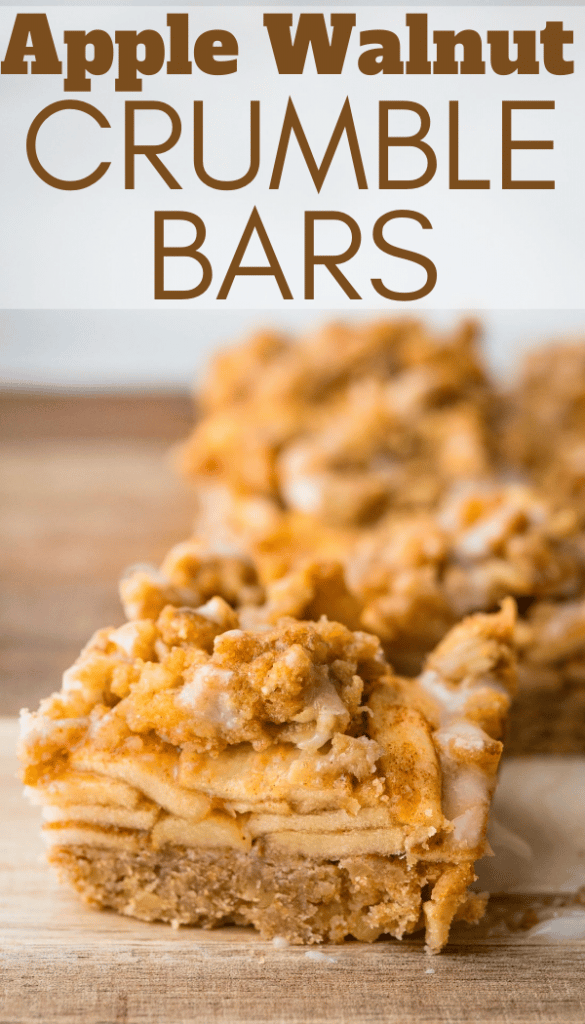