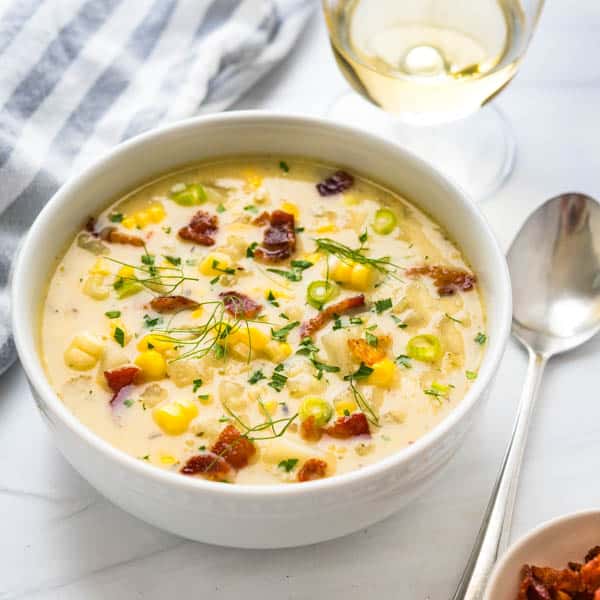 Easy Smoky Sweet Corn Chowder
Inspired by Dorie Greenspan's Fresh Off The Cob Corn Chowder, this version is creamy, chunky and delicious. My rendition is gluten free and flavored with bacon and (optional) ham hocks. Use corn off the cob and the corn cobs to give this rich soup even more sweetness and depth.
Total: 1 hour
JUMP TO RECIPE PRINT RECIPE
Home | Recipes | Soups, Stews & Braises | Luscious Smoky Sweet Corn Chowder with Potatoes and Bacon
858 shares

The onslaught of summer corn practically demands a pot of sweet corn chowder, right? Using corn right off the cob (or frozen kernels, if it’s the dead of winter and you’re craving some NOW), diced potatoes and veggies this easy corn chowder is finished with a bit of cream, a skosh of white wine and crispy bacon crumbles. It’s ready to eat in under and hour and I think you’ll agree, it’s the best corn chowder recipe. 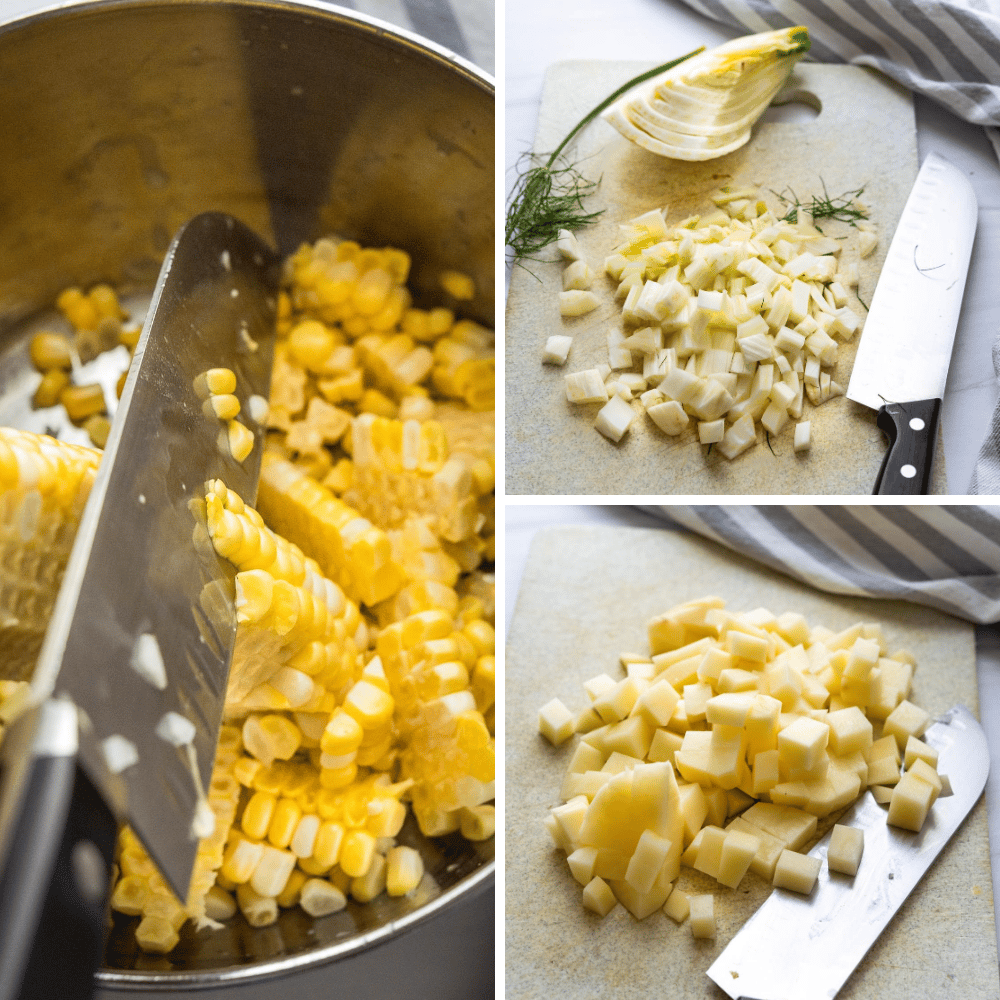 What you’ll need for sweet and smoky corn chowder

Because this recipe comes together fairly quickly, I recommend prepping the vegetables for the chowder before you start cooking. 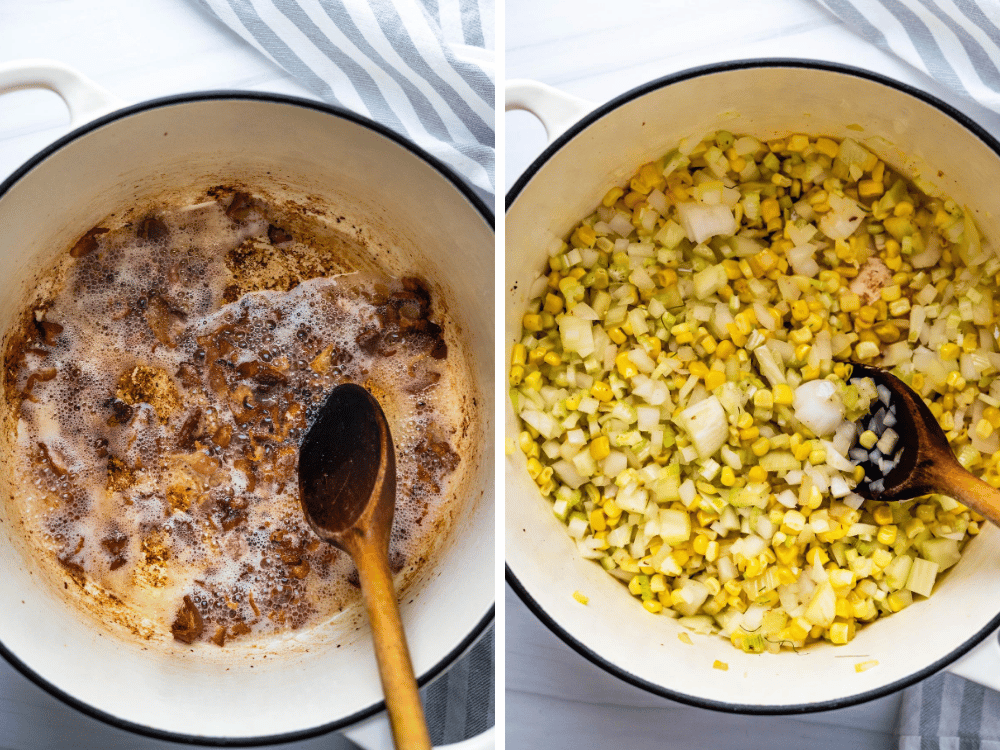 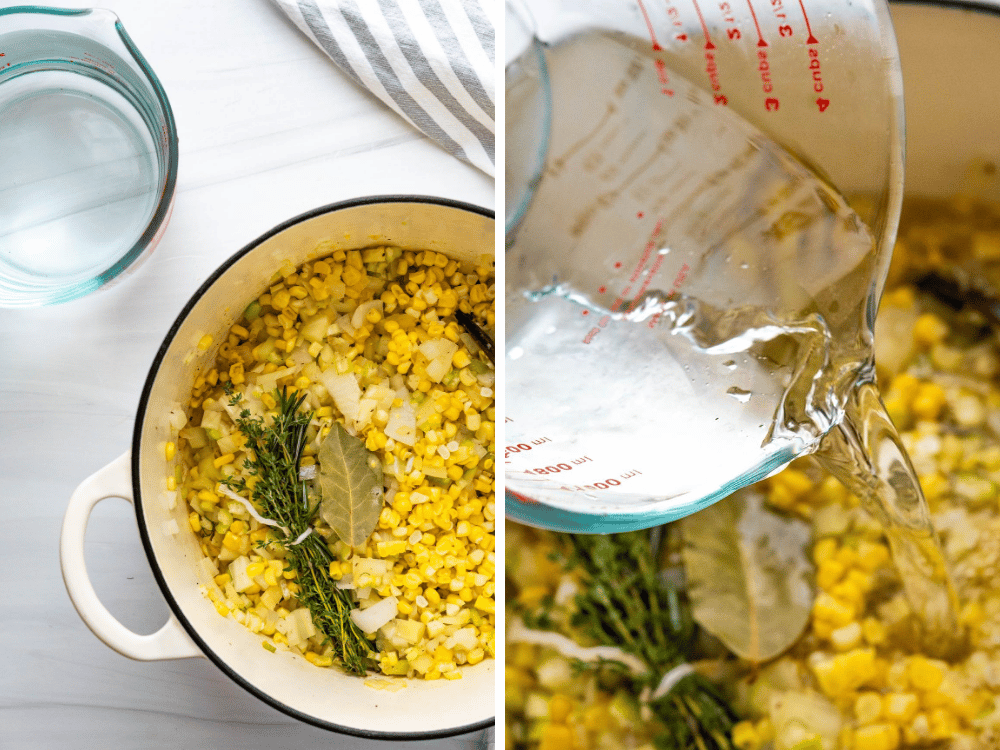 3 things that make this easy corn chowder the best 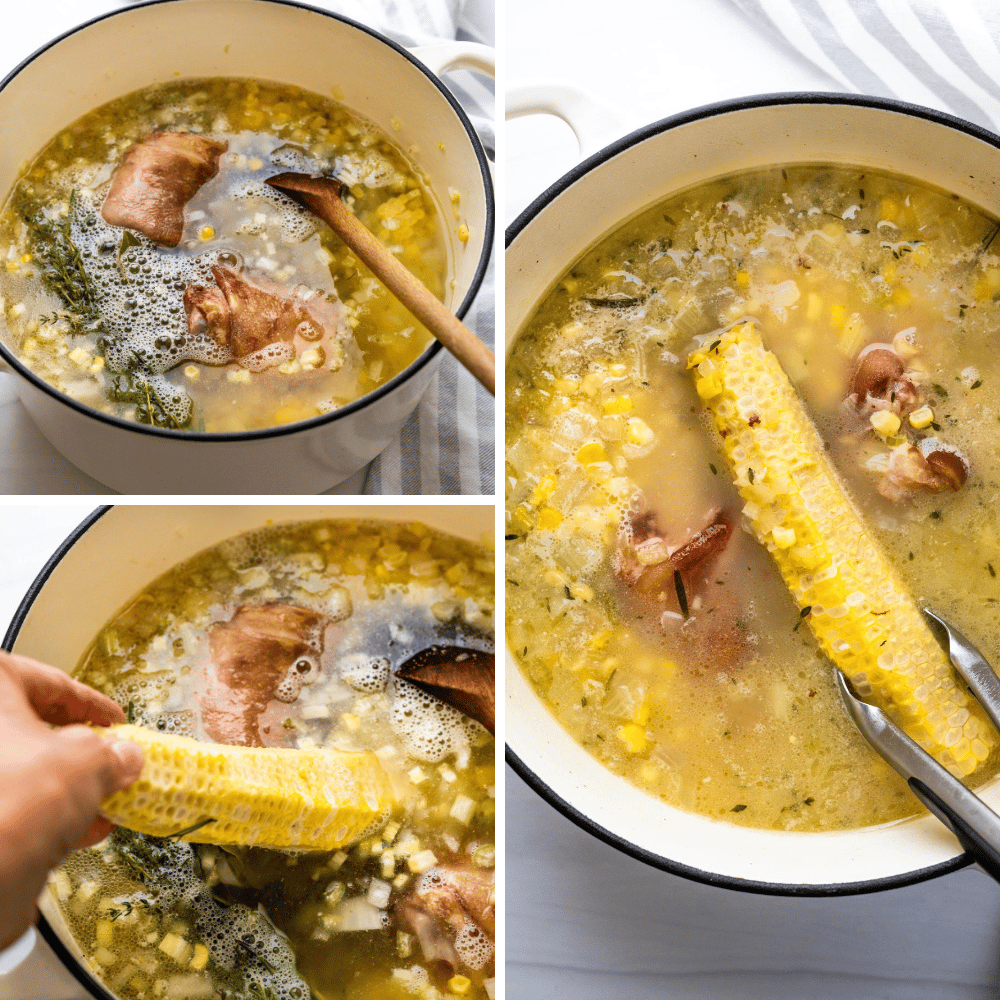 What are ham hocks?

Ham hocks are the lower portion of the pork leg.  Usually found in 4″ chunks in the meat department, ham hocks are mostly collagen, fat, connective tissue and bone, so while they don’t add much in terms of meat, they’re ideal for, amping up depth and richness in soups, stews and braises.

Normally, I use ham hocks in longer cooking, braises to render all of the flavor and collagen for the finished dish, but in this fairly quick-cooking sweet corn chowder, the hocks add just a kiss of smoky-porky flavor and enough tongue-coating umami to give the broth a satiny feel.

What if I don’t have ham hocks? 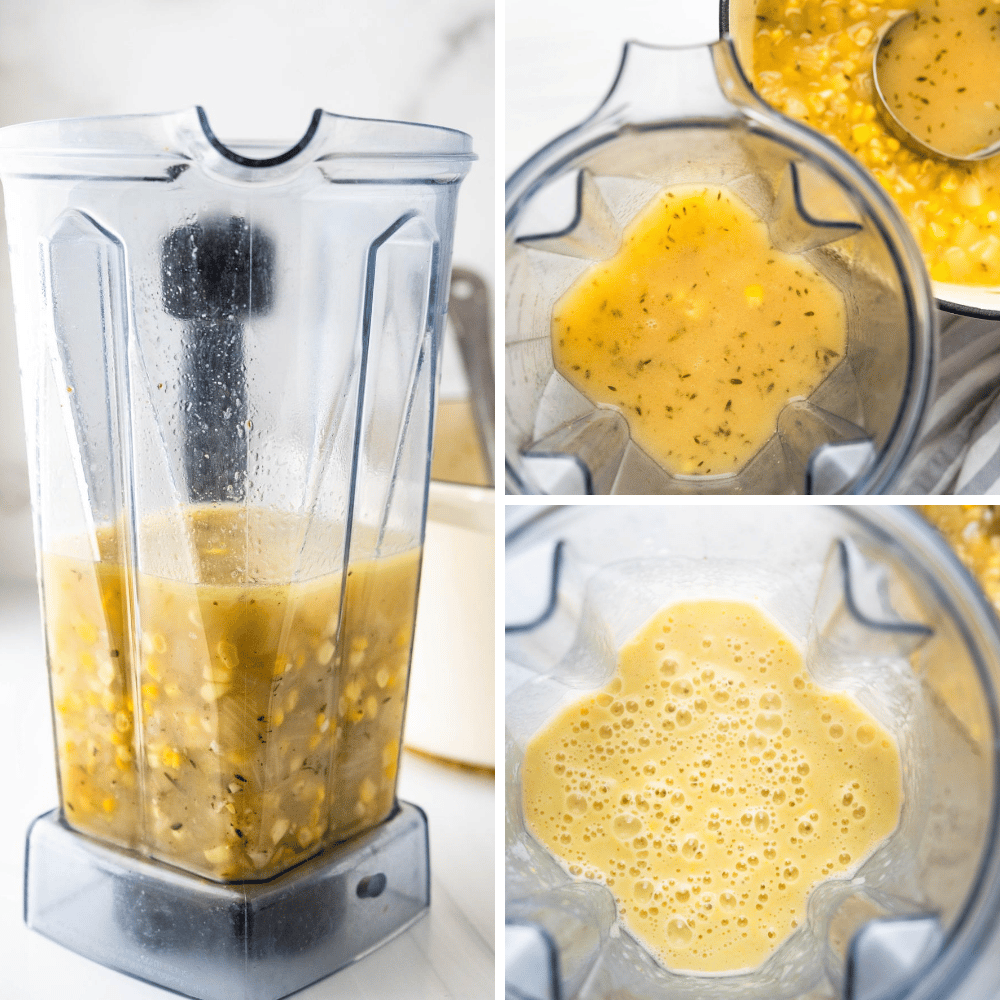 Skip the roux for this corn chowder recipe

Many corn chowder recipes use a roux (a cooked butter and flour paste) to thicken the broth and add body. This one doesn’t. Instead, it’s thickened with a vegetable purée (made from some of the simmered corn and potato soup) to give it the creamy texture and luscious mouth feel you expect.  See how the broth and veg is transformed into a creamy, luscious puree? It’s thick and viscous, giving body to the rest of the sweet corn chowder without the extra butter and flour from the traditional thickeners. 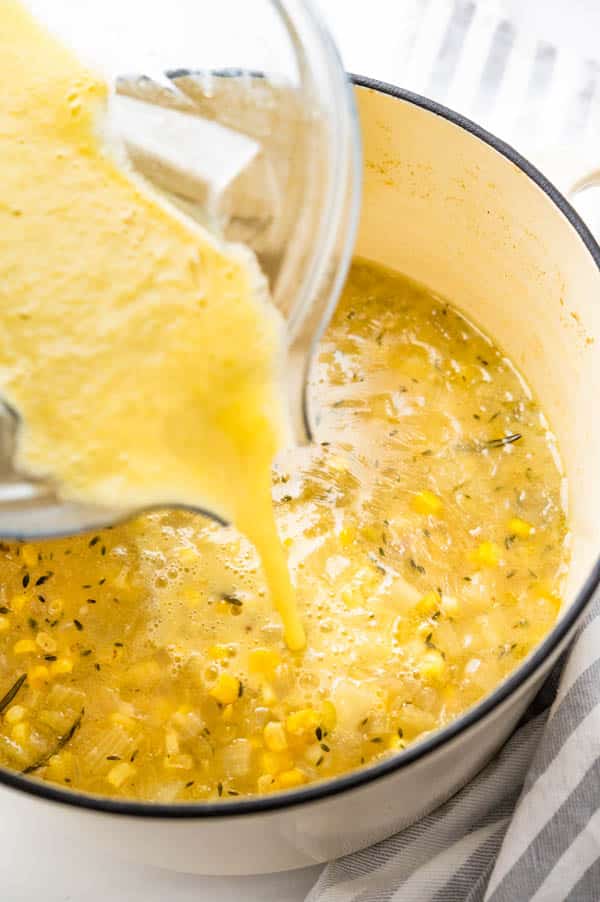 After adding the pureed corn soup back to the pot, stir in the remainder of the diced potatoes, cream and wine and simmer for another 10 minutes, or until the potatoes are tender. The potatoes that were cooked in the beginning of the recipe, are softened to the point of almost falling apart. By adding the other half of the spuds toward the end of cooking, you’ll get the tender chunky bites of potato you’d expect in a chowder. 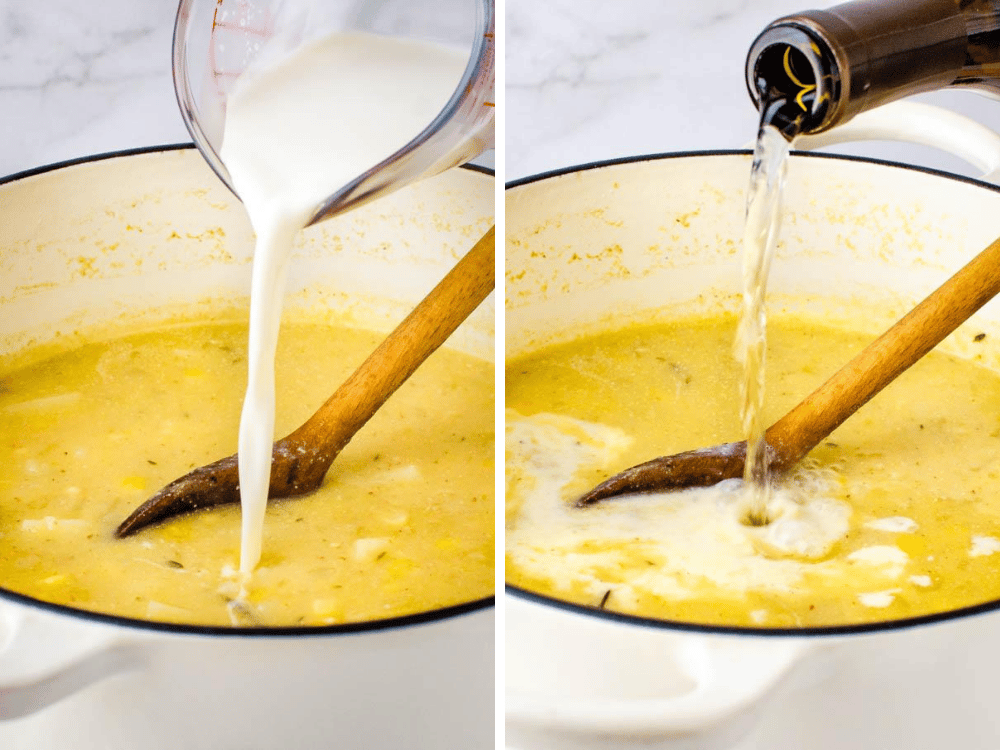 This chowder is such a warm, comforting dish. The broth is creamy and rich, without being heavy. It has a mild smokiness with sweet corn flavor. Brightening the chowder with just a few tablespoons of dry white wine balances the flavors and prevents the soup from being one-note. Bring this pot of sweet smoky corn chowder to the table with everyone’s favorite fixin’s and ladle out the goodness.

What to serve with sweet corn chowder: 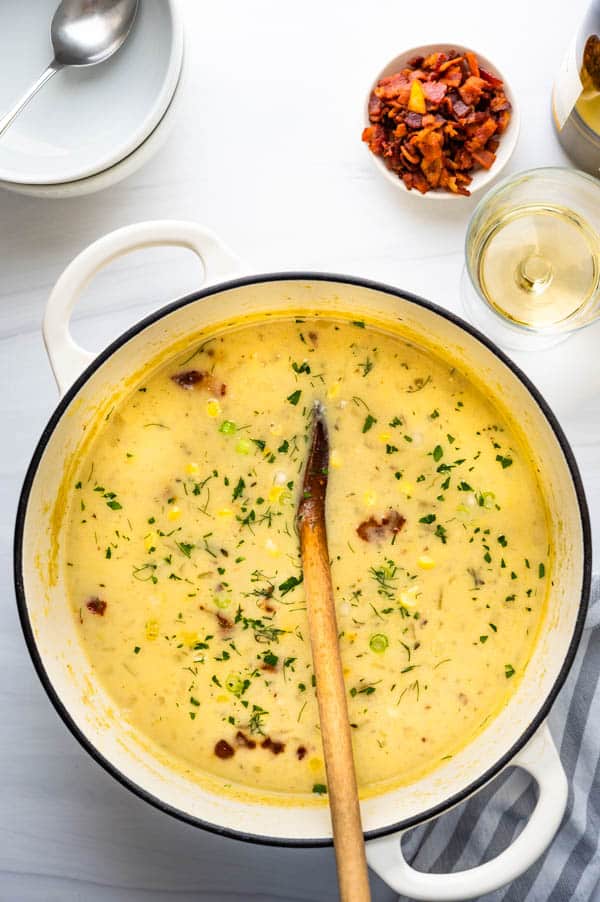 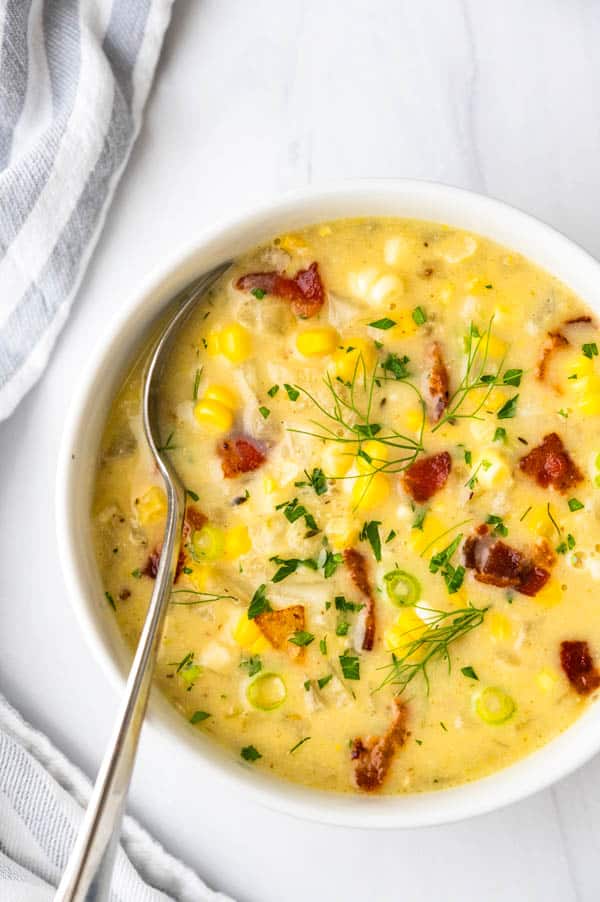 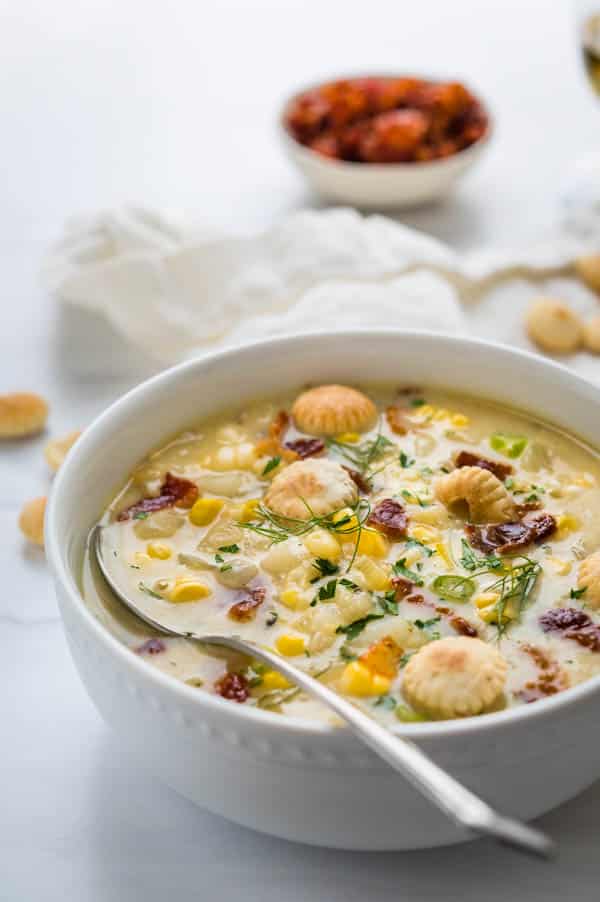 Inspired by Dorie Greenspan's Fresh Off The Cob Corn Chowder, this version is creamy, chunky and delicious. My rendition is gluten free and flavored with bacon and (optional) ham hocks. Use corn off the cob and the corn cobs to give this rich soup even more sweetness and depth.
Course Main Course, Soup
Cuisine American
Keyword corn, corn chowder
Prep Time 20 minutes
Cook Time 40 minutes
Total Time 1 hour
Servings 6

FOR THE CORN CHOWDER: 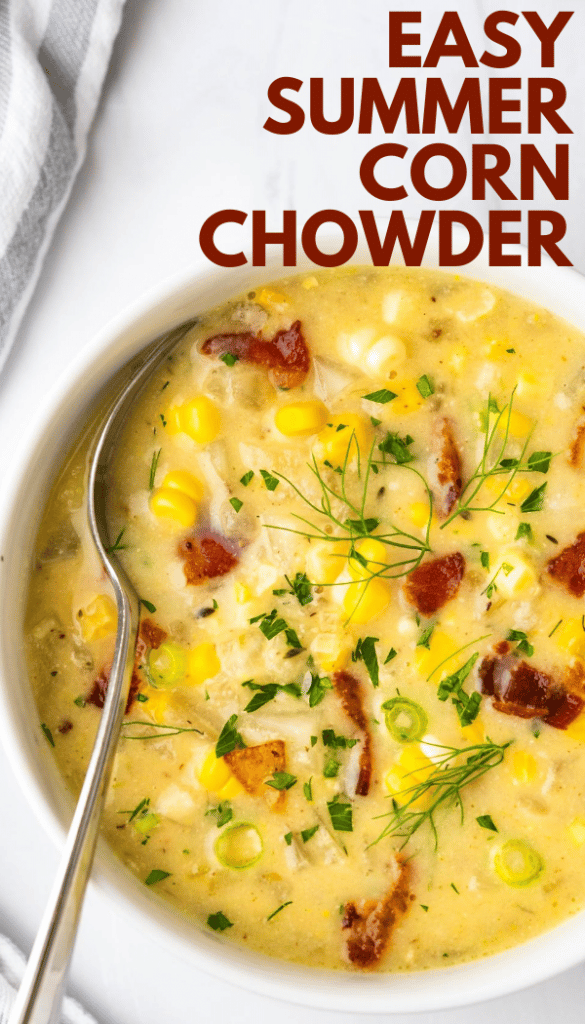