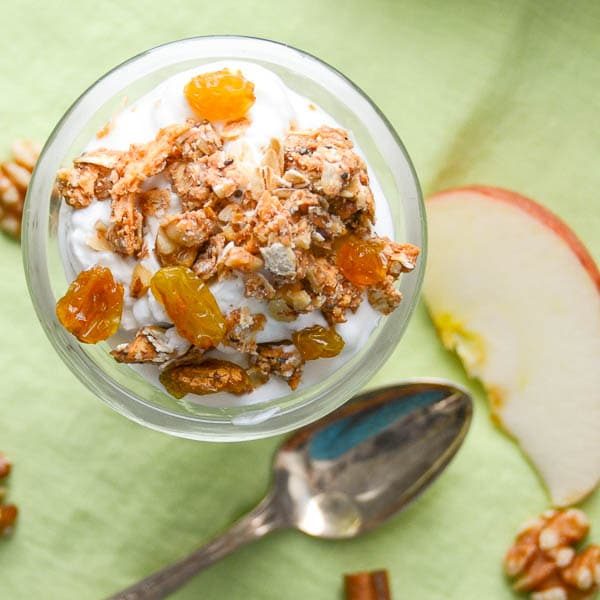 It’s September, and though we won’t feel a breath of cool air in these parts for at least another two months, I like to slip into a blissful ignorance about my tropical climes and imagine the cool autumn breezes that wik away the summer sweat.  I’m not the only one. Anyone who lives in South Florida looks forward to those intermittent seasonal dips and the scents and flavors they evoke. 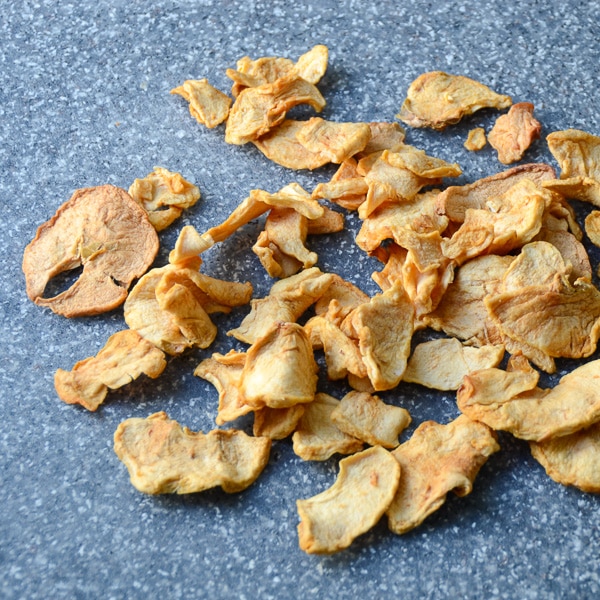 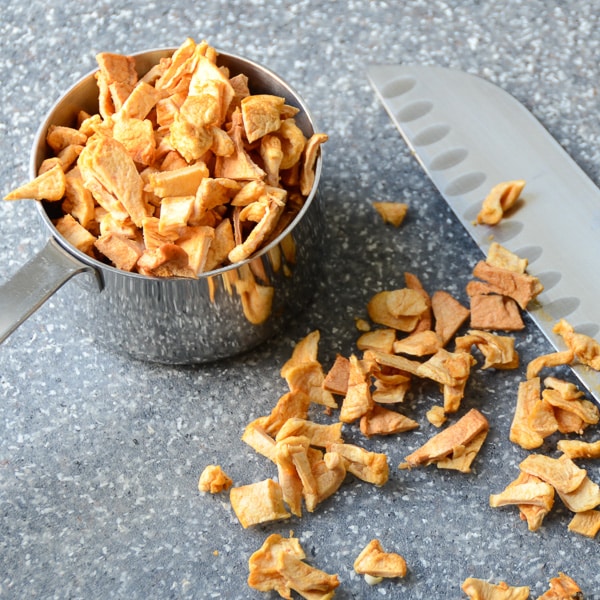 Which is how I came up with this apple walnut spice granola.  September and October are full-on apple season, and really, the only other flavor that’s more “fall” is pumpkin — but you really should wait until October for that one. 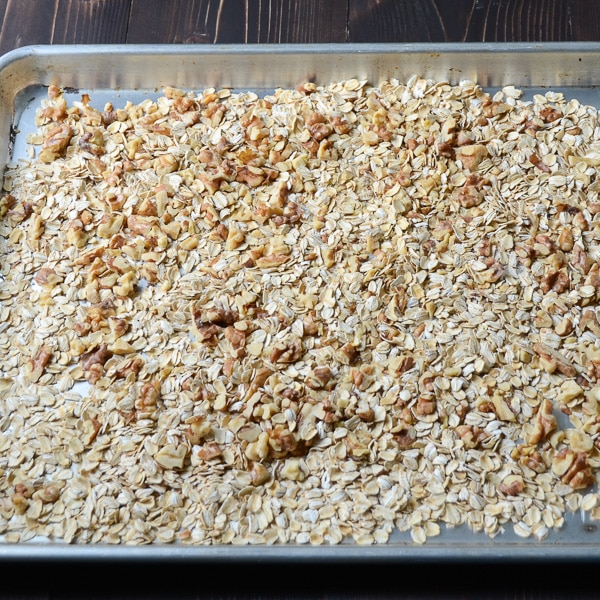 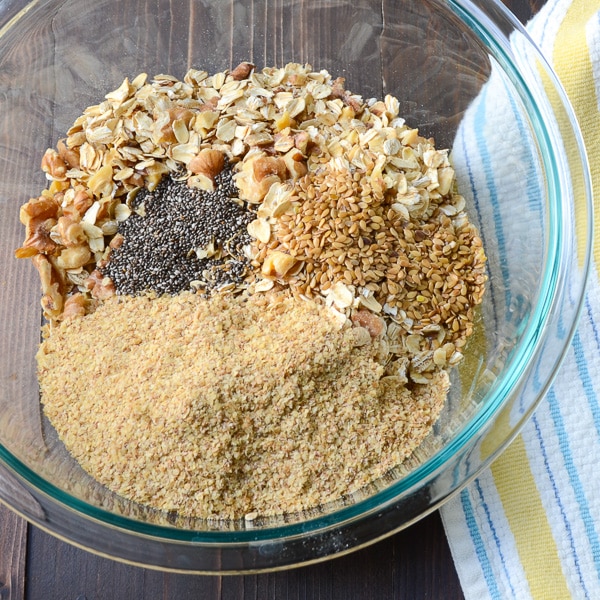 This granola gets crunch from toasted oats, wheat germ and walnuts, with an extra boost of nutrition from flax and chia seeds (optional, but tasty). 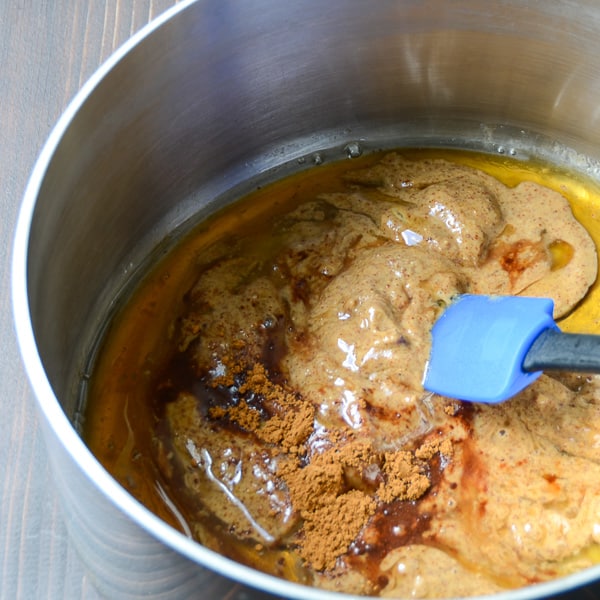 Granola should have fruit, too.  At least I think it should.  I used chewy dried apples and tangy golden raisins for little pops of sweetness throughout. 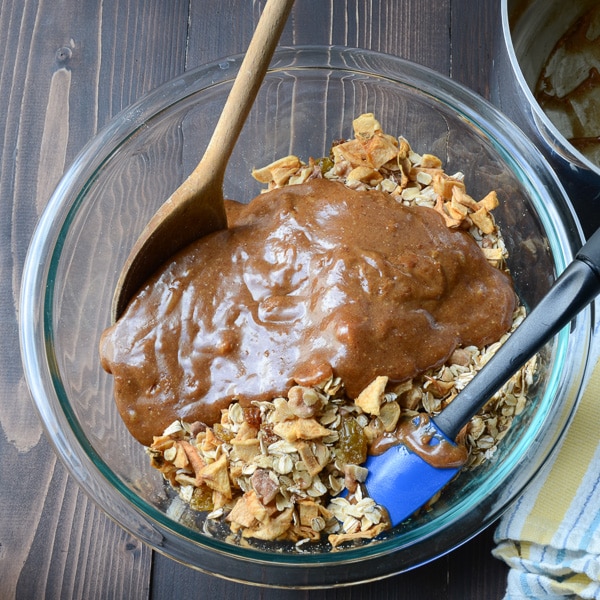 The binder is a combination of almond butter, honey and maple syrup with a shower of apple pie spice to tickle your nose and tastebuds. 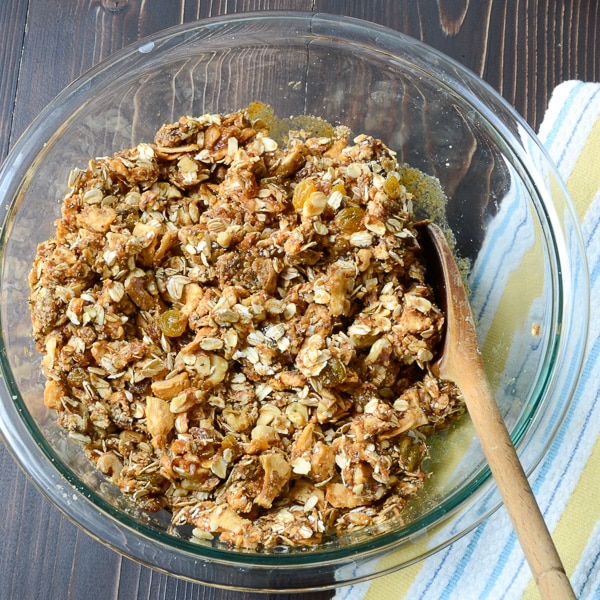 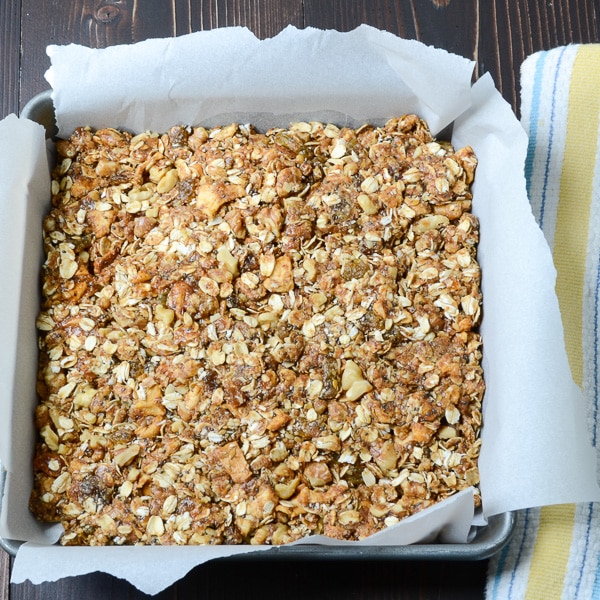 OK – confession time.  I planned to make granola bars.  I packed the still warm mixture into my  pan.  I baked it and let it cool.  I turned it out onto a cutting board and using my sharpest knife, began to cut it into bars.  But they didn’t cut like “bars”.  Instead they shattered into jagged chunks, shards and crumbles. Not cool! 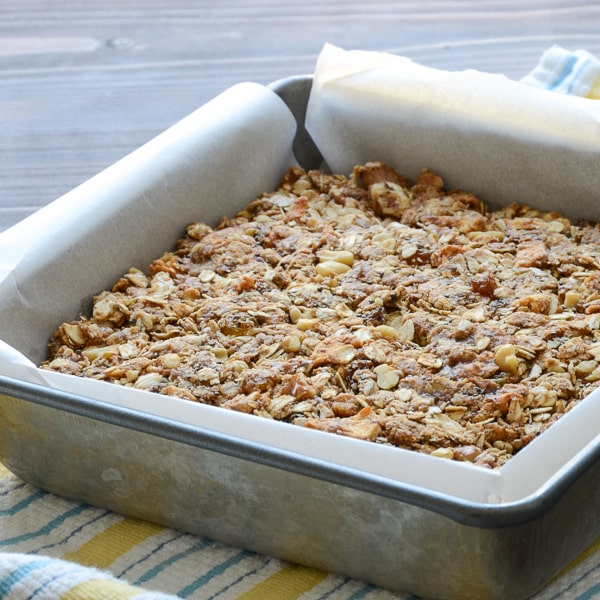 I think it was the dried apple.  Turns out that dried apple is more leathery in texture than I’d remembered.   And because the apple was scattered throughout the granola, I couldn’t achieve any neat, orderly portions.  Rather than feed the whole batch to the squirrels, I decided to call it what it was.  Granola.  Delicious with fruit, yummy over yogurt, sensational to snack on at your desk.  Any way you slice it, or crumble it, it’s good. 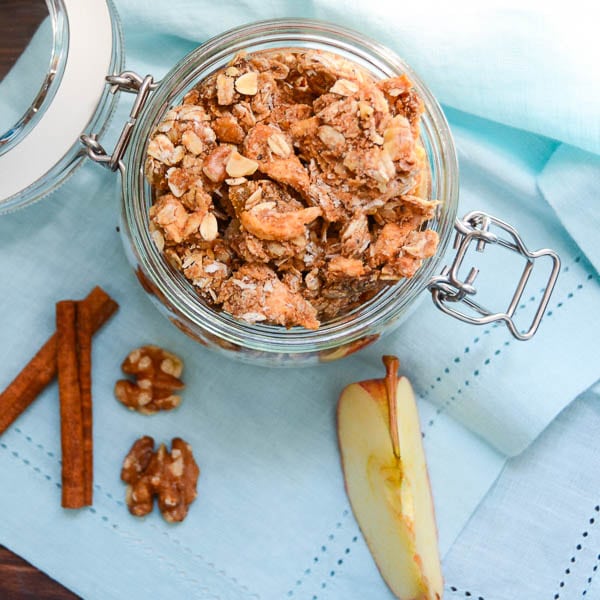 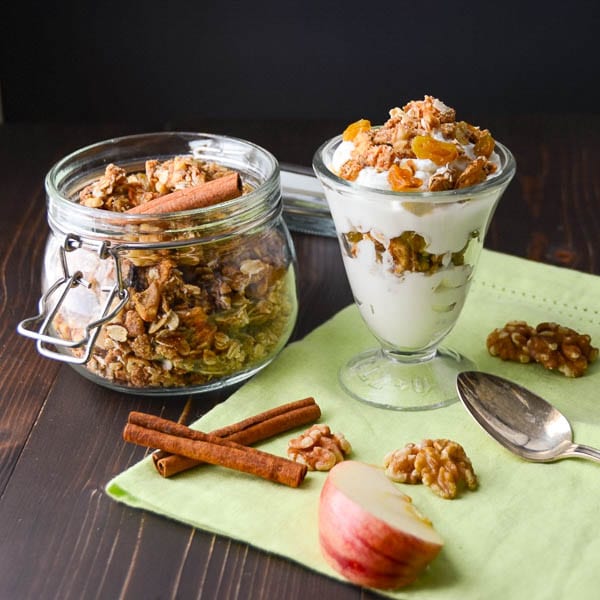 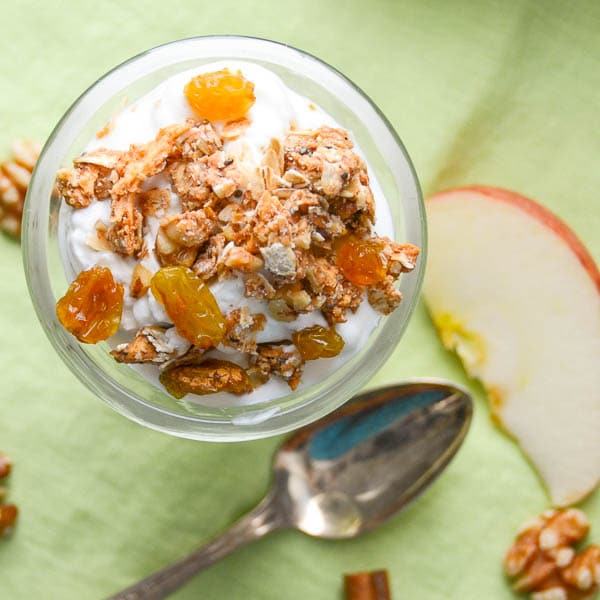 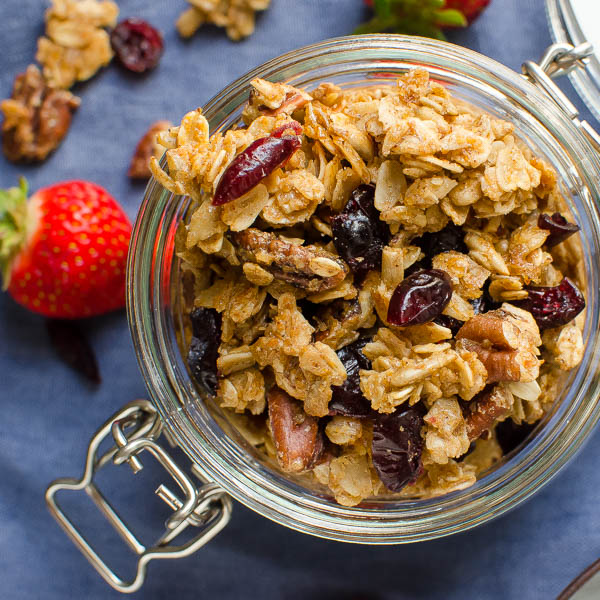 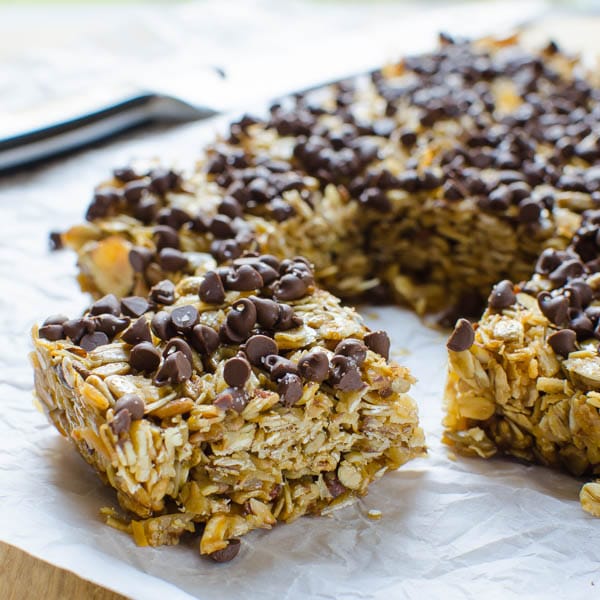 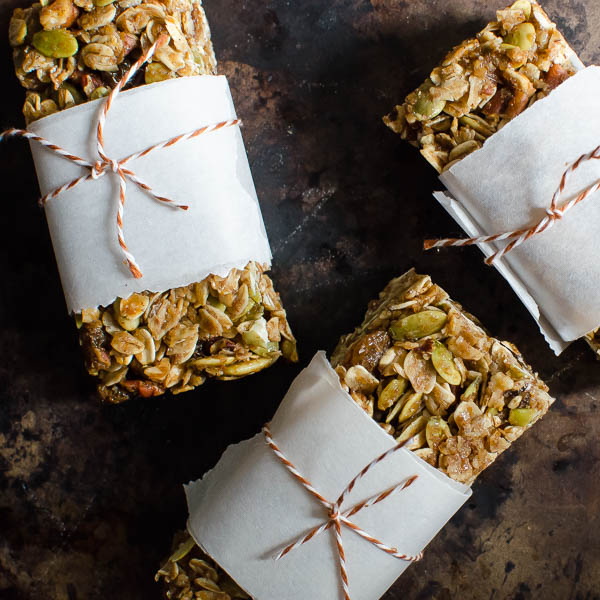