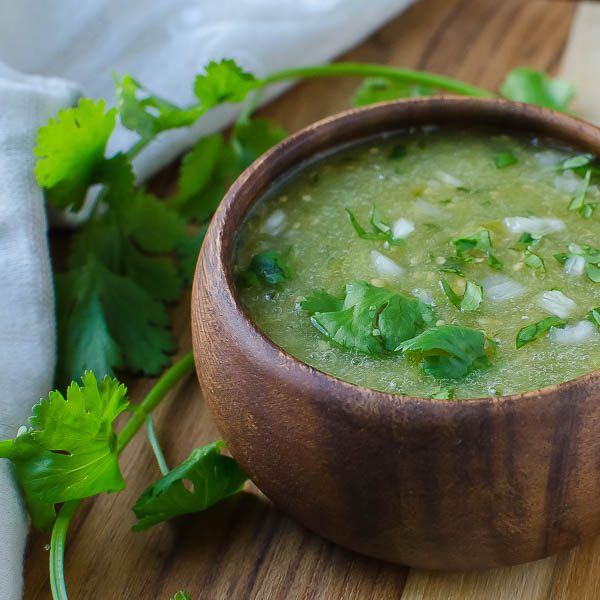 There are hundreds of recipes for salsa verde.  Roasted and grilled, some with red peppers added and others calling for  chipotle to add a smoky flavor.  I’ve even got a version that chars the tomatillos before blending.  So when I got together with my friend, Aurora, who hails from Puebla, Mexico to talk about classic Cinco De Mayo dishes, she happily obliged and gave me instructions for the Authentic Spicy Salsa Verde that they make in Puebla, Mexico. 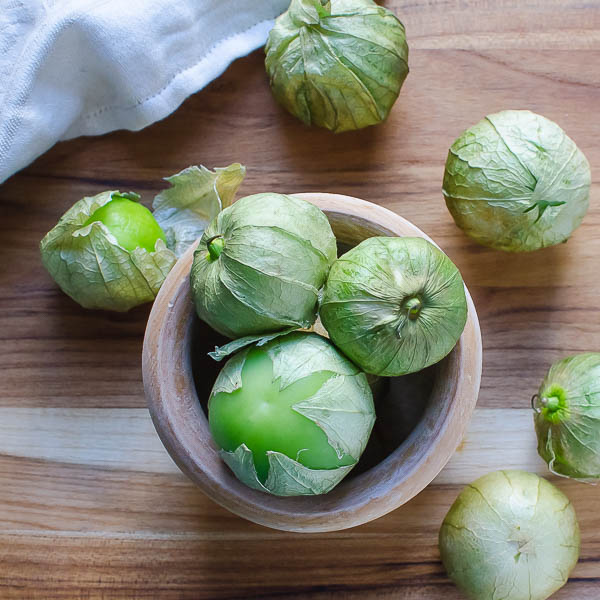 While we were sampling some of her hand-crafted dishes, Aurora gave me a Cinco De Mayo primer and  dispelled all of my American notions about what the holiday really represents.  Like many Americans, I had originally heard that Cinco De Mayo is Mexico’s Independence Day.  Not so. 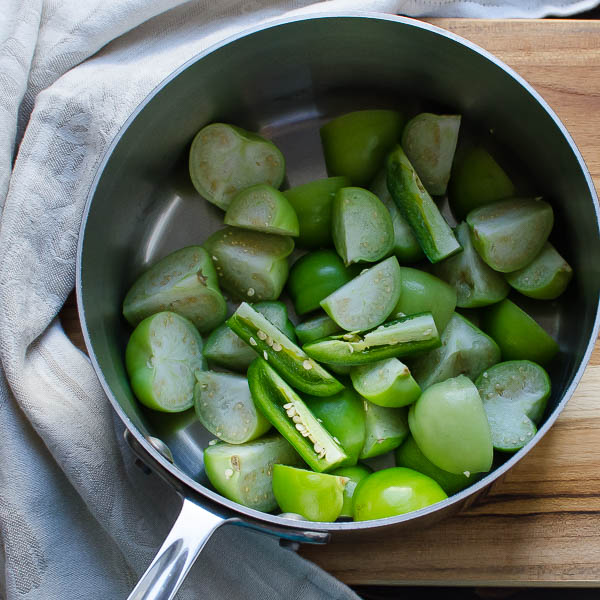 Instead, it actually commemorates the unlikely victory of the Mexican  army over the French in the Battle of Puebla.  In the battle that followed this one, the French did prevail but the citizens of Puebla still acknowledge that first win back in 1862 and today it’s the only place in Mexico that celebrates Cinco De Mayo.  Sorry to burst your bubble. 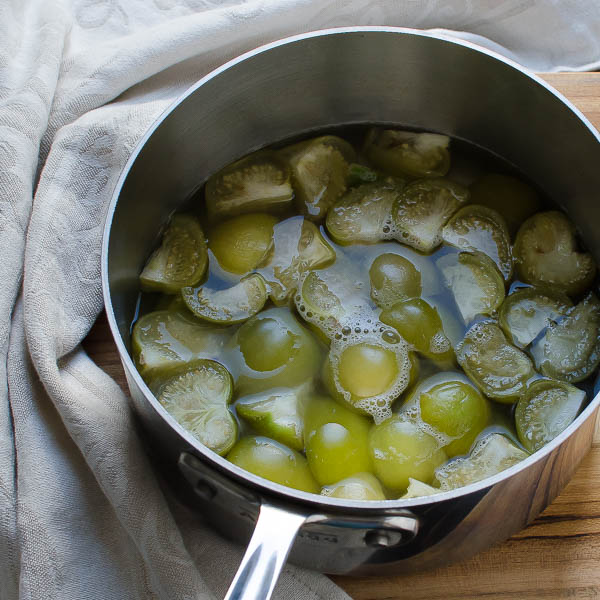 Aurora described the celebration as a festival held in town that lasts for a few weeks.  There are rides and attractions but no “official” dish, drink or gotta have food.   I was envisioning the “Cinco margarita” or a “must make guacamole“.  Nope.  I felt kinda foolish — the silly American romanticizing what simply wasn’t a thing.  Blame the Corona commercials, right? 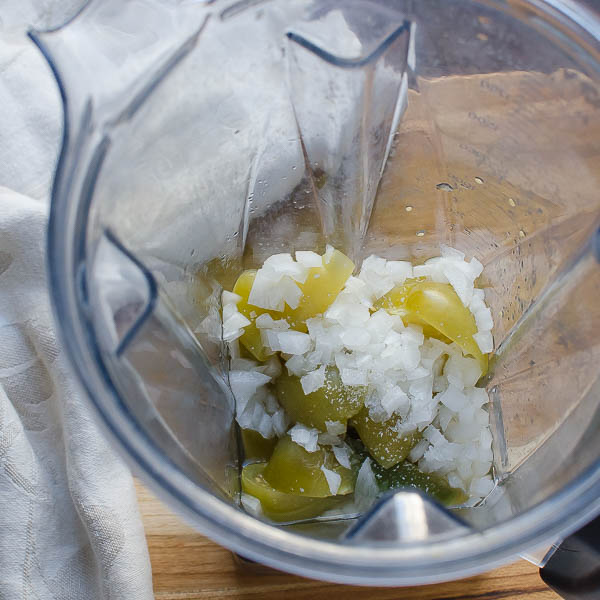 When Aurora offered to share her Authentic Spicy Salsa Verde recipe, I shrugged off my disappointment .  You won’t believe how simple it is.   This punchy salsa is ready in about 10 minutes — and if you’re squeamish about spice, I’m including a few tips so you can moderate the heat to your tastes. 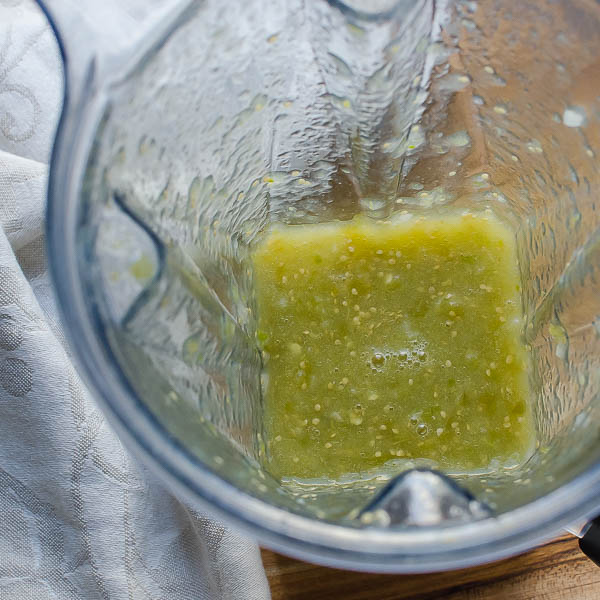 Aurora is one of those “pinch of this” a “bit of that” cooks – which is to say, she’s done it for so long that she just knows when it’s right.  I love that.  However, I did some measuring to make it easier for you.   Start with a pound of tomatillos and a jalapeno pepper.  Quarter them and add them to a saucepan. {Tip #1:  If you like less spice, remove the seeds and membrane from the jalapeno before adding it to the pot.  (That’s where most of the heat is).} 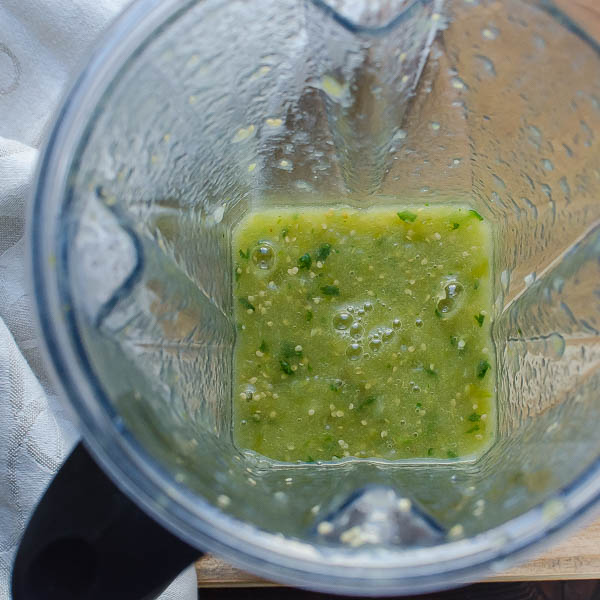 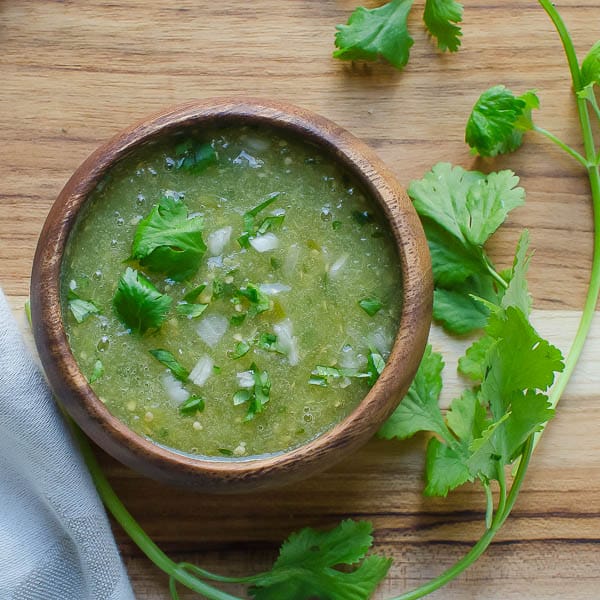 If the salsa’s a little thick, you can add a bit of water from the pot, about 1-2 tablespoons at a time. 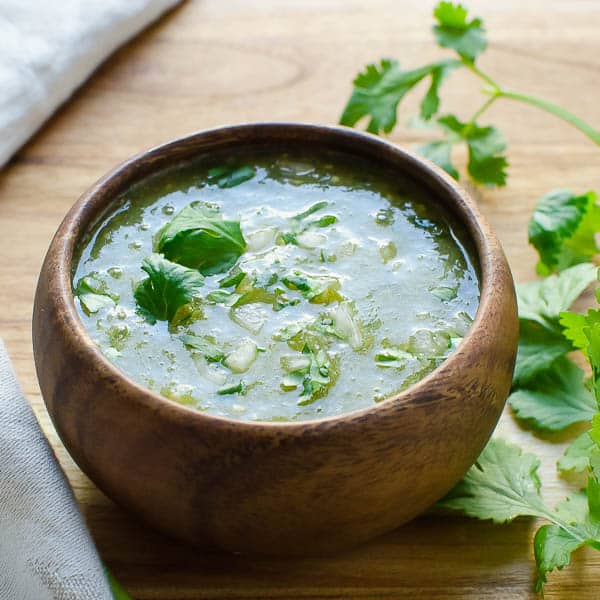 Add the cilantro and pulse until blended. Taste for seasoning and extra salt if needed.  That’s it!   I’ll never buy the jarred stuff again and neither should you! 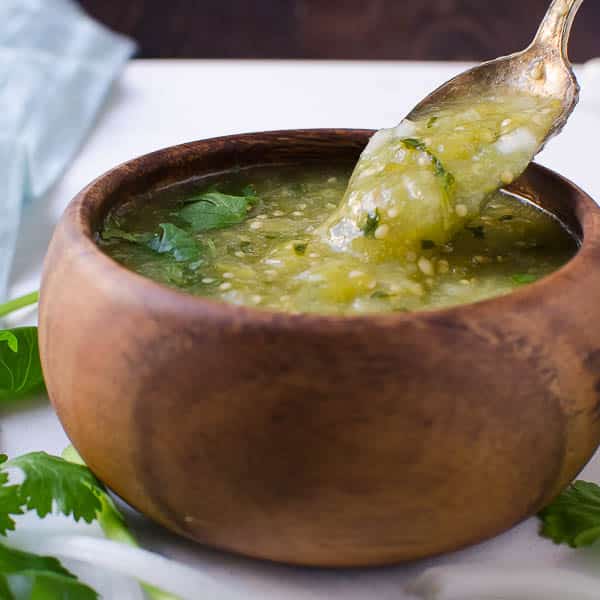 Whether you’re making your favorite tacos or tostadas, burritos or flautas,  make sure you’re serving this Authentic Spicy Salsa Verde alongside.  It’s the real deal! 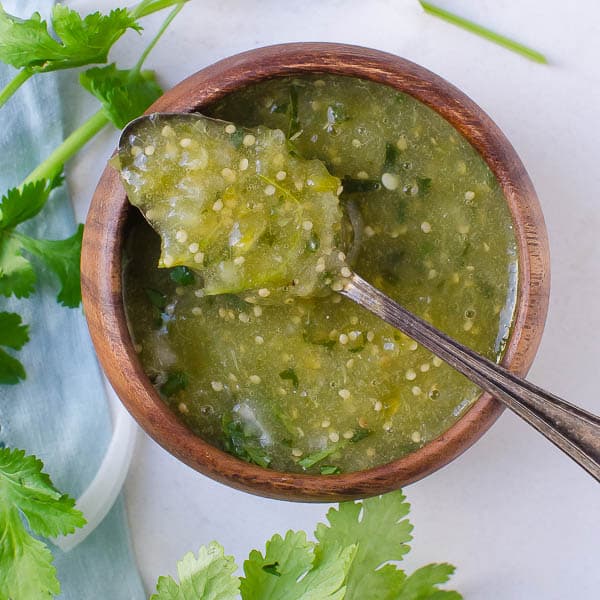 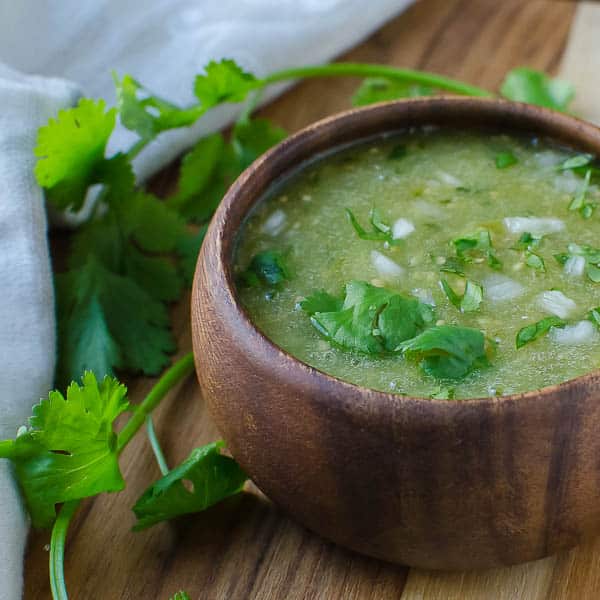 Don’t forget to Pin It: