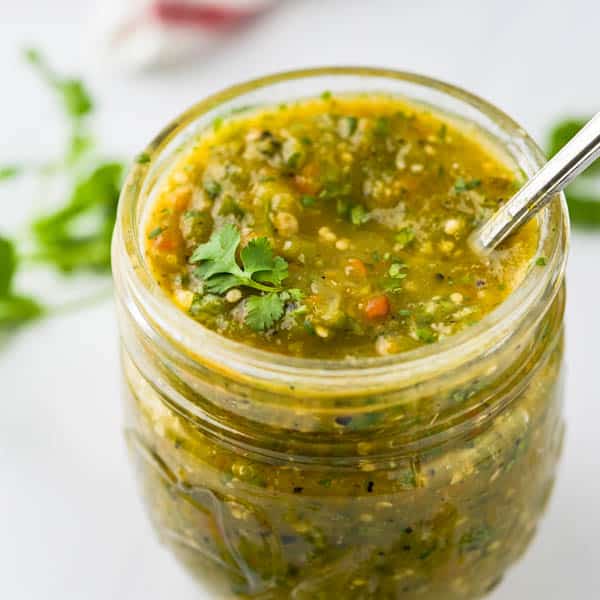 How often do you burn something on purpose?  I’m talking char!  Real pyromania-type scorching! I don’t normally condone it, but for this green chile salsa, it’s absolutely essential.  This tomatillo green chile salsa is spicy, tangy and tongue tingling.   I love saying that word – Toe-ma-tee-yo!

This is a riff on a Rick Bayless recipe from his cookbook Mexican Everyday.  I can’t say enough about it.  Both the salsa and the cookbook. His classic fire roasted salsa recipe uses just 8 ingredients and coaxes the best flavors out of each one of them.

There are several ways to char poblano peppers for this simple salsa. If you have a gas cooktop or grill, it’s as simple as placing the peppers directly over the flame. If you’re not cooking with gas, a hot oven will do the trick.

How to fire roast poblano peppers for green chile salsa

Charring peppers on a gas cooktop or grill:

Charring poblanos in the oven:

Tomatillos are part of the nightshade family and they’re the secret star of salsa verdes the world over. (Learn more about tomatillos from Gordon Ramsay here) That papery skin that covers them (called a calyx) is easily removed, just peel it back and pull it from the stem. The tomatillos may feel a bit tacky to the touch, that’s normal. Give them a good rinse, then cut them in half crosswise to roast.

How to char tomatillos jalapeños and garlic for green chile salsa

Signs the vegetables are done

Note: if you don’t like things on the spicy side, you may want to remove the seeds and membranes from the jalapeños, but if you don’t mind the heat, leave them in.

The reason we put the charred poblanos in a bowl covered in plastic wrap is to steam them slightly AND loosen their skins. As the peppers cool, the steam and heat will soften up the papery char so that you can remove it easily.

The rest of this is super easy. I use my mini prep food processor for the job, but a regular food processor or a blender will do the trick too. (If you’re using a blender, don’t over puree it, it should have a little body.)

Finish the charred salsa verde with some finely minced white onion (not yellow) and salt to taste. Oh-Ma-Gawd! Green chile salsa is where it’s AT!

This kicky, fire roasted blend puts other salsas to shame. Scott loves this with all of his Mexican and Southwestern favorites, but it’s delicious on eggs, frittatas and even avocado toast with a fried egg and Canadian bacon. Seriously fab.

Use charred poblano salsa verde with: