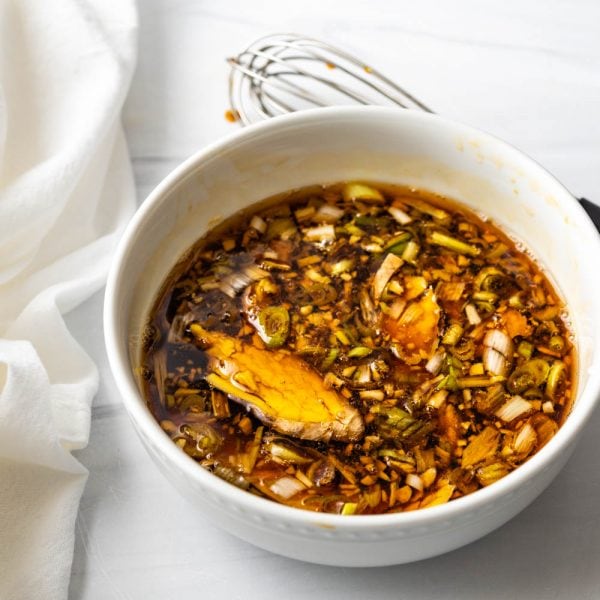 This post contains affiliate links, which means that if you make a purchase, you’ll pay no more for the product and I’ll receive a small commission.

It’s easier than you think to make a homemade teriyaki marinade for beef, poultry and pork. This simple Asian marinade has only 7 ingredients and takes about 10 minutes to make. It’s a basic teriyaki recipe that you can customize with lots of variations. Make this teriyaki marinade for chicken thighs, london broil, pork tenderloin or even a good ribeye steak that’s destined for the grill.

I’ve made this homemade teriyaki for years and it’s too good not to share with you. Originally, the recipe for this Asian marinade came from Steve Raichlen’s book on Sauces, Rubs and Marinades {affiliate link}. I’ve included my own tweaks, tips and variations for you.

Classic teriyaki sauce is actually more of an American thing, than Japanese. In fact, you won’t find this marinade on in kitchens or even as a preparation on menus in Japan.

Teriyaki marinade was actually created by Japanese immigrants who settled in the Hawaiian islands. They mixed local ingredients like pineapple juice and ginger with soy sauce or Tamari, garlic and sesame oil for a unique flavor that’s become beloved across the states.

But Teriyaki isn’t just a marinade. It refers to the style of cooking. “Teri” literally meaning “shine” or “glaze” and “yaki” meaning “grilled”.

Read more about the History of Teriyaki Sauce here.

There are many iterations of teriyaki marinade and this homemade version is loaded with rich umami flavor with a tingly spice (from ginger and garlic) and a bit of sweet (honey). Marinating proteins with whole ingredients like garlic, ginger and scallions, give this homemade recipe a rustic look and authentic flavor.

The difference between Tamari & Soy Sauce

Tamari – You’ll sometimes hear tamari referred to as “vegan or gluten free soy sauce” but it’s much more than that. It’s thicker, richer and more balanced than soy sauce.

Tamari is made from the pressed liquids that come from making miso paste (fermented soybeans). As it ages, the flavors develop and become more complex.

Soy Sauce, on the other hand, is a brewed mixture of soy beans, wheat and grains. Soy sauce is cheaper than tamari, and though it’s commonly swapped in Americanized recipes, make this one with tamari. Your homemade teriyaki marinade is worth it.

Mirin is a sweet cooking rice wine that’s lower in alcohol and sweeter than Shaoxing, which is lighter, more bracing and not fortified with the various carbohydrates that give Mirin its distinctive flavor.

Real mirin is subtly sweet, tangy and rich and is the secret behind many homemade Asian dipping sauces and marinades like this teriyaki.

Sometimes you’ll find Mirin labeled “aji-mirin”, which means “another class” or “tastes like”. For the purposes of this teriyaki marinade, it’s fine.

If you can’t find mirin, try rice wine or sherry with a little honey or agave.

What is toasted sesame oil?

The aroma hits you in the face as soon as you crack open a bottle and you can taste the rich, warm, nutty flavor and that profile, that makes it so unique.

Toasted sesame oil makes all the difference in dipping sauces wok frying and in salad dressings. I think it’s a critical part of this recipe, but there are substitutes if you can’t find it.

This recipe uses aromatics like green onions, ginger and garlic in their whole form. There’s no need to do a super fine job of grating, chopping or mincing these ingredients.

Crushing or bruising and a rough chop will allow their essences to permeate the marinade.

To develop the ginger flavor in the marinade, slice it into thin cross sections, then mash it by laying the flat side of a wide chef’s knife or santoku over the ginger slice and whacking it firmly with your fist.

You can also give it a swift-whack with a meat mallet to crush the ginger and open up the cells.

To assemble the marinade simply add all of the ingredients into a bowl and whisk together. That’s it.

It’s best used the day you’re cooking, because the green onions, garlic and ginger can become overpowering if you let them sit for longer.

How long should I marinate proteins in the teriyaki?

For larger cuts, like a pork roast 6-8 hours is sufficient.
For smaller things like chops, steaks and chicken pieces, 1-2 hours works well.
Small bits like shrimp, squid or fish, only need 30-60 minutes in the homemade teriyaki.

Can the recipe be doubled?

This makes enough for about 2 pounds of meat. If you’ve got more meat to marinate, yes, you can double the recipe.

Can I make a sauce from the Asian marinade?

As long as you’re making the sauce without marinating any meat chicken or seafood first, then yes.

To make a sauce, boil the ingredients down until the marinade is thicker, like syrup. Strain the ingredients through a mesh strainer, then use the teriyaki sauce to brush onto items for the grill or to season a stir fry. 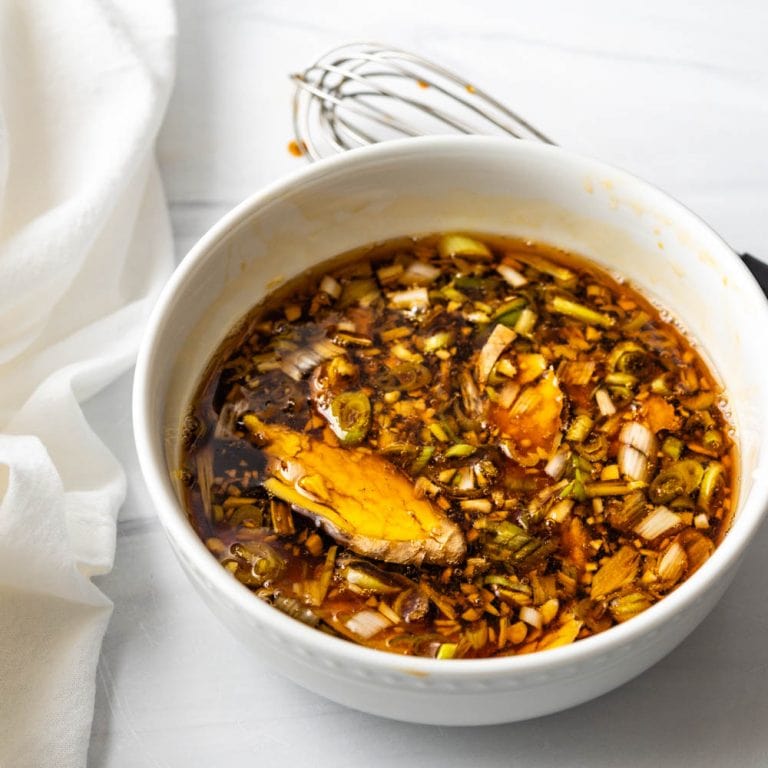 Makes a scant cup of marinade. This recipe can be doubled.