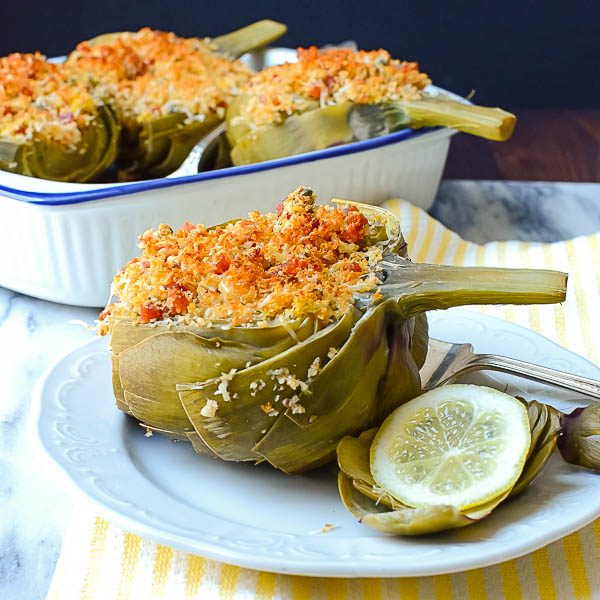 If you’ve never made or eaten artichokes before, you might be a bit befuddled as to what to do with them, how to prepare them — or even which parts are edible.  In that respect, artichokes are a novelty vegetable.

Tough, spiky petals protect the goods inside.  And you’d never know how delicate the heart and stem can be if you didn’t get past this flower’s armored exterior.

But there’s really nothing to it.  For this version, I start by scraping the outer skin from the stem with a vegetable peeler, then using kitchen sheers to cut the spiky point from each of the petals.  Trim the top third of the vegetable with a really sharp knife.  (Be careful).

Split the artichoke in half, vertically and use a sturdy spoon to remove the hairy choke and the purple interior.  There.  The hard work is done.  After that, just steam them until they’re tender.  The time can vary by artichoke.  Sometimes they’re ready in as little as 25 minutes, others take longer.

You can tell when they’re done if you can easily pull a petal from the stem.  Just to be sure, I scrape the meat off the bottom third of the petal with my teeth — cook’s prerogative.  It should be tender — if not, give it more time in the sauna.  Dry the veg with paper towels and sprinkle with a little olive oil.

I like this Italian-inspired breadcrumb topping.  It makes the dish feel more substantial and refined — but it’s also very simple to make.  Whiz a few slices of bread in the mini-prep, add grated parmesan, crispy diced pancetta, capers, lemon zest and leftover oil from frying the Italian bacon.  Toss well to thoroughly combine, fill the cavities of the artichokes liberally with the stuffing and brown it under the broiler.

Mom made artichokes when I was a kid.  Not often, but often enough that I knew what to expect.  Scott on the other hand, didn’t.  He just stared at the platter with a quizzical look on his face that urged, “you first.”

So I went first and showed him how to tug the petals free from the flower and scrape the fleshy meat from the soft tender part at the bottom.  After devouring the petals, we started in on the heart and tender part of the stem.  Umm-nom-nom!!!

The breadcrumb topping added depth and bulk to the artichoke without being heavy.  Scott liked the bright hit of lemon and capers too — which added layers of flavor without being overpowering.  Good eats.  Scott had 2 halves. 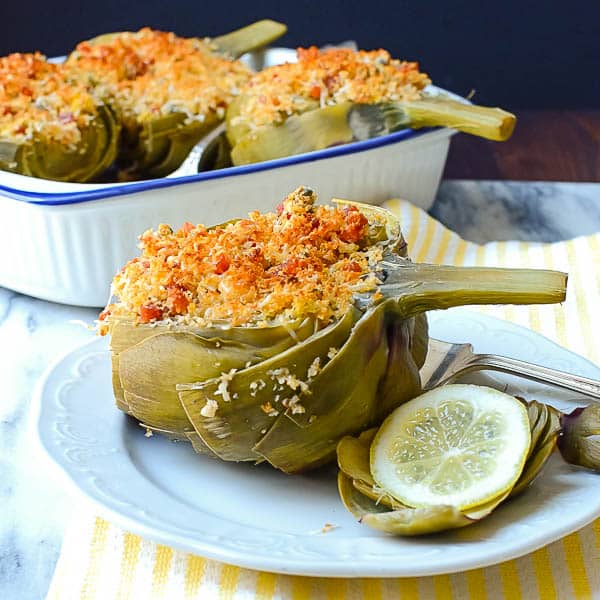